So it was a return to The Ring of Steall for me and Jim.
In November 2012 we travelled up rather naively to do these Munros in winter conditions, see
https://www.walkhighlands.co.uk/Forum/viewtopic.php?f=9&t=26836.

We always said we would return and leave it for a better day, no snow involved !
Joining us this time were Tommy and Martyn.
Martyn`s first words on hearing this trip was on were "Why when you take me out it`s always four Munros?"

We drove up on the Friday night before, the last days of my two week Summer holiday from work were approaching fast and having had glorious sunshine for most of it, apart from when I did the CMD route earlier that week, the weather was taking a wee dip with some rain and cloud forecast ! How dare you ???

We decide to camp at the Glen Nevis campsite for convenience and headed off in the morning for a 8.30 start.

We would start at the carpark at Polldubh and walk in rather than having to do the walk back to the car after a big hill day.
It`s a good warm up for what lies ahead anyway as being too close a start to a climb can be a real sickener.
We marched along the trail through the trees on the south side of the river rather than the road.
Cameron Mcneish quotes WH Murray who says it`s the best half mile walk in Scotland ! Hard to argue but I bet there`s a thousand "best half mile walks" in Scotland !

After our leafy walk we crossed the bridge to bring you out to the end car park, which was full of cars and vans and then by the impressive gorge before it all opens up to reveal Steall Fall waterfall. The others walked on as I stopped for some photos so by the time i got to the wire bridge Jim was almost already over. 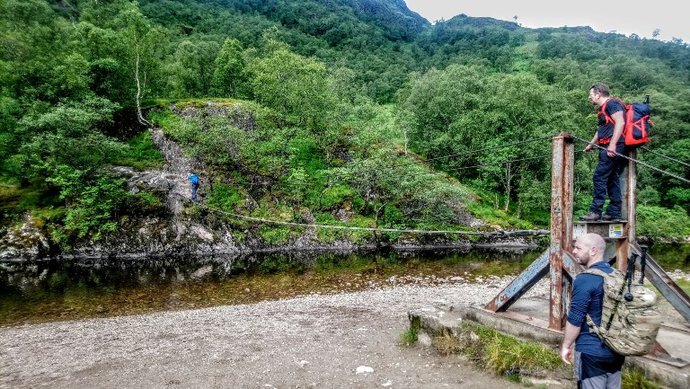 Strangely there was what seemed like a full mini keg of Old Speckled Hen ale sitting at the foot of the bridge. I didn`t have enough room in my bag so I left it...

Onto the wire bridge and it seemed more awkward than I remembered it ! Slowly I made my way across, one foot at a time making sure i wasn`t to be the one to fall in !

Easily negotiated we moved onto the waterfall crossing , Jim and I hopped over the boulders, Tommy and Martyn went downstream a bit a crossed at the easy bit Steall Falls (no idea what my expression is here!)

Next we had to cross the only boggy section of the day between the falls and the start of the climb. We hopped, skipped, jumped and squelched our way through it staying relatively clean & dry. then it was straight up onto the ziggy path. It is steep and almost relentless. Many stops were made for a breath and a scenic look, mainly so we could catch a breath ! We were soon into the low cloud and we just soldiered on continually telling ourselves this was the toughest section of the day.
Once we reached the 850m mark the cloud began to come and go giving us glimpses of An Gearanach summit and Ben Nevis behind us. An Gearanach comes out of the mist

Not long to the first Munro of the day boys, and the fun is just about to begin !
There was a crowd ahead of us who I suspected was our friend Alice and her crew, a walking group called Walking for Erskine, who meet up regularly and raise money for charity, great bunch.
We met up with them at the summit and shared some Jelly Babies and some laughs before they headed onto the ridge. This is where it starts to get gnarly, narrow ridge path down towards An Garbhanach which has then to be climbed over or skirted around the top via a bypass path.
This is where most people say is the most dramatic part of the walk. The steep slabs seemingly sliding down into nothingness below. We intermingled with Alice`s group going over here and i ended up at the rear so there was no time to discuss the scramble over , everyone took it in their stride anyway , some by the bypass others right over the top of the ridge, much easier without snow ! After this section we left the Erskine group behind and headed towards Stob Coire a'Chairn. Stob Coire a Chairn next This is a relatively easy climb compared to An Gearanach and we got up fairly quickly. On Stob Coire a Chairn

Still the cloud was coming and going giving us glimpses down to Kinlochleven and the surrounding hills and although it was still fairly mild there was a wee chill up on this one.
Once the Erskine crew came and disturbed our peace we were off again !

Heading for Am Bodach now , this would be another steep climb. 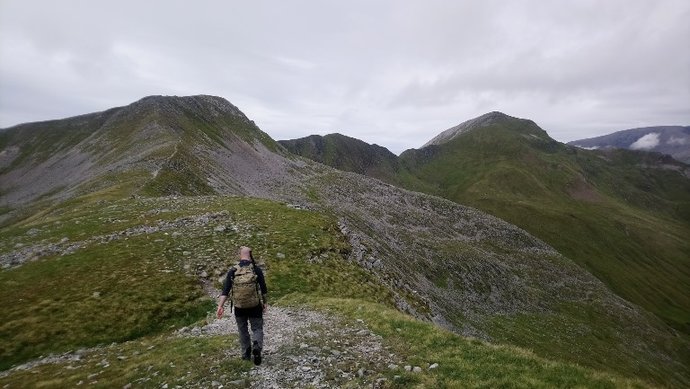 Martin walks to Am Bodach

And it was bit we were rewarded at the top with a much clearer sky and some bonny sunshine. We had a good rest up here , basking in the sun and eating jelly babies. Some people even got a little carried away , taking far too many clothes off ! Sorry but pictures can`t be posted here ! Alice and her "other" walking friends joined us again ready for a good rest, thankfully they hadn`t a clue what they had missed!

Again we then set off leaving them to enjoy the summit to themselves. And as I thought we wouldn`t see them for the rest of the day we got some pictures with Alice. 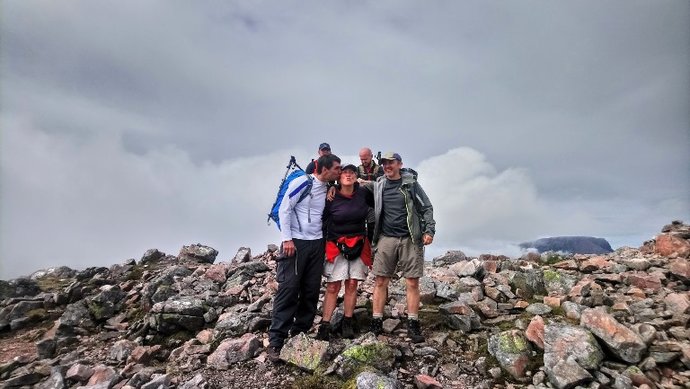 The demoted Munro Sgor an Iubhair was next and I really enjoyed that one too, nice airy ridge walk leading to The Devil`s Ridge , the part that Jim had scared Tommy shitless about !

And it was much narrower and tricky than I thought it would be. Climbing up Sgurr an lubhair

We were surrounded in mist and there was right atmospheric mood in the air as we approached it. could be the last message you ever send....

Jim made his way across the tricky section with the boulder you have to shimmy around forgetting about the drop below. He made across no bother and the Martyn followed next , i had already offered to take his backpack over the bypass but he kept it on , wanting t do it properly. I took Tommy`s bag instead...

I started videoing them as they crossed but i thought maybe i should go underneath them on the bypass and maybe try and catch them if they fell rather than videoing them !

They all made it over no bother although Tommy did break his specs in his pocket as he was hugging the rock so tight ! Now on the bypass path with Tommy`s rucksack I contemplated taking his bag over, walking back and then going over the ridge myself but as I watched them from below and tried to keep my balance with this extra weight on the narrow path with a steep drop below me , i thought better of it. I had got my adrenaline rush on this section !

So all the dangerous stuff was over and just the last climb over the fourth Munro was to be done. But it was a bit of a monster and all our legs were getting tired .
We reached the top in cloud and didn`t hang aroun long before making the long steep descent to the end of the walk. It was a day that had everything good from a day on the hills , one of the best walks I`ve done and i was so glad we gave up that first time because we would never had a day like this.

Fantastic meeting up with you all again and hope to do so again soon. My bike will be going rusty at this rate