Having done the "other" Fersit munro duo (the Easains) the day before and camped at Fersit for the night, I could have had an early walk departure; but the forecast was poor in the morning and better in the afternoon, so I killed time by watching a film on my tablet until the rain stopped mid-morning. Another car had pulled in and the couple sat for half an hour waiting for things to improve too, but they headed off to the Easains rather than the boggier munros on the east of Loch Treig. I didn't see anyone else all day, not even the infamous farmer or his cows. Leaving the track and heading for Sron na Garbh-bheinne ... it looks pretty tame from here...

I roughly followed the WH route, though if there is a specific route from leaving the track at Fersit and heading up Sron na Garbh-Bheinne, I didn't find it. I just ploughed through the boggy approach (regretting not putting gaiters on) and ploughed up the steep ascent (most of which remained boggy and wet), with a strong suspicion that I wasn't taking the optimal route! Don't know if it was tiredness after the walk yesterday, the steep pathless ascent being draining, or what, but I felt I was being quite slow ascending and really wasn't particularly enjoying it. There were a lot of clouds just above or brushing the tops of mountains everywhere, with heavy showers in places by the looks of it, but at least the clouds were above these 2 mountains as I headed up so I could see where I was going. 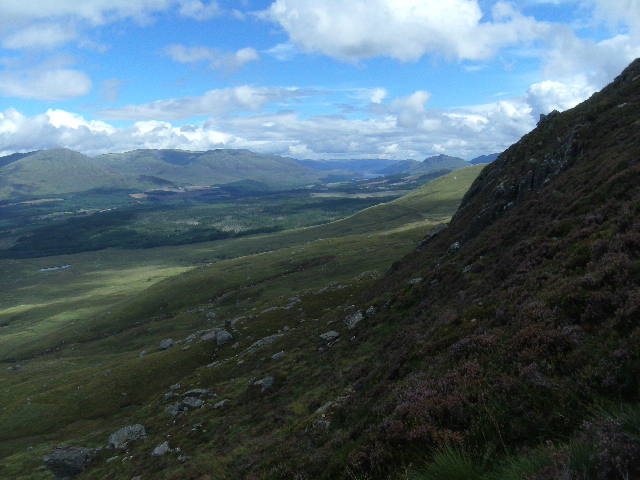 It was a relief to get to the rockier top of Sron na Garbh-Bheinne and finally signs of a path. The ascent up to the summit of the day's first munro, Stob Coire Sgriodain, wasn't as soul destroying as the long slog up Sron na Garbh-Bheinne, and I almost had a spring in my step once I got to the point where I saw the cairn up ahead. Great views from the summit across Loch Treig to Stob Coire Easain and Stob a'Choire Mheadhoin, the 2 mountains I did the day before, and down the loch to the Mamores and Glen Coe beyond. The munros north of the A86 were also looking good, with summits in and out of cloud; my next target of the day, Chno Dearg was also still cloud-free, though there were some dark clouds not far away. At least I could see the rough route to take around to it. 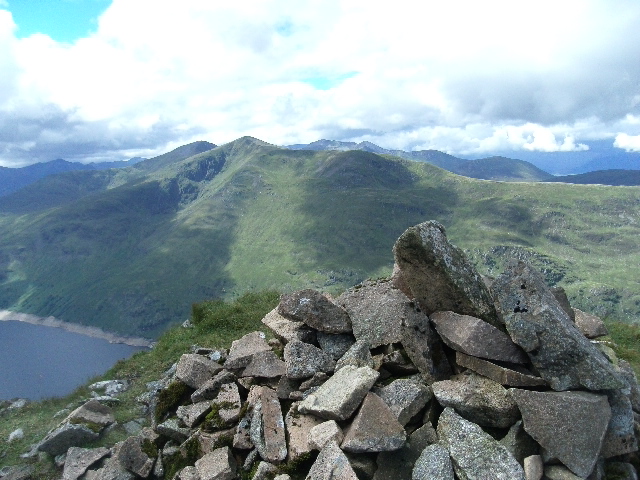 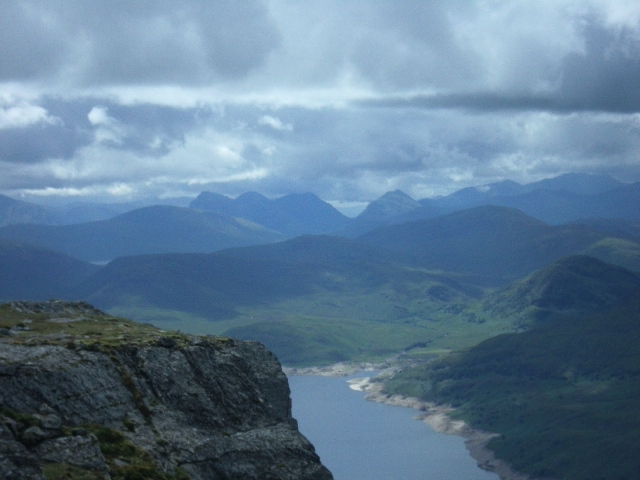 I headed down in to the Glac Bhan cleft (nice views out the side of the "V"), up over the 958m point (nice cairn, someone has gone to the trouble of picking out all the white quartz stones to build it) and then down and across the boggy ground to the start of the grassy ascent up Chno Dearg. From the cleft of Glac Bhan It was at this point the dark clouds descended, visibility was rubbish, and the rain was heavy. Now I was regretting not wearing waterproof trousers as well as not wearing gaiters. On stonier ground on this walk, traces of path were evident, but everywhere on grassy, heathery or mossy ground, either there were none or I just couldn't see any. At least when Chno Dearg had been visible from a distance I'd seen it was just a case of heading up the grassy slopes to the summit with nothing complicated on the way; if you have to go up a hill with just a few metres of visibility, it was as good a one as any. A couple of times I saw things looming out of the clag looking like a potential big summit cairn, only to find out they were small rocks I was just quite close to! I got to the rocky summit plateau and had no further "up" I could find, but still couldn't see the cairn. I was there for about a minute or two, reluctant to stumble around in the crappy conditions and risk getting disorientated, when the cloud briefly thinned and I saw it about 30m away from where I was standing. It disappeared again, but at least I could head in that direction and finally make it. Phew, made it to the right place after all, Chno Dearg summit cairn finally spotted Views of nothing but a cairn and clouds

There were no glimpses of blue sky and no signs of the rain and cloud abating, so although I was sure they would given the nature of the weather all day, it was too cold and wet to hang around waiting for something which might take an hour (but might take 5 mins). I had in my head what felt like the right direction to head off for the descent back to Fersit, but checked with my compass to be sure, and there were signs of a path, so as all 3 matched, I headed off down the slope. As per the rest of the walk, the path disappeared once I was past the initial stony part and into the wet, boggy terrain, but I came out of the clag, Fersit was in the distance, and it was just a case of heading straight down by whichever route I fancied through the soggy ground and peat hags, being careful to avoid twisting an ankle on the numerous little streams covered by long grass. I thought I'd be down in no time, but it seemed to takes ages, with Fersit stubbornly not getting any nearer! But eventually I came out on the path to Corrour (by which time Chno Dearg summit had blue skies above, grrrr!!) turned left, and was back on the track through Fersit and back to the car. Back down below the cloud, with Fersit to aim for

The walk had felt like a bit of a slog, so I was surprised I'd actually done it in decent time (under 5.5hrs). It's the first walk this summer where I'd been dreaming of a hot drink, hot meal and a hot shower most of the way round; the past few weeks of dry, warm weather almost had me forgetting I live in the Highlands!

My 100th up there. Had a nice inversion that day.
You didn't mention the rabid hound of fersit !! Wonder it it's still there pouncing on unsuspecting walkers!!

No rabid hound, no mad farmer, and no cows ..... but honestly, I was in Fersit!! They must have been on their summer holidays