Despite the mountain's majestic appearance I had previously been put off Beinn a'Bheithir by uninviting accounts of the ascent and descent routes - steep pathless heather, tree felling and and eroded muddy paths seemed to be the order of the day. However, encouraged by the generally dry ground conditions, I decided to give it a go, starting from the forest car park at Glenachulish.

In my experience, finding a route through forest can often be very confusing, but in this case it was not. After an initial section on a wide track, the ascent continued on a well-made path with occasional signposts to Sgorr Dhearg at critical points. And the excellent views of the mountain were enhanced by the trees. Another advantage of the trees was the shade they provided on a warm, windless morning. As height was gained, the ridge leading up to Sgorr Dhonuill began to look very impressive. Eventually, the path emerged from the trees at a gate, and a rough path ran out parallel to an old fence. Loch Linnhe was now visible far below. As I had hoped, the boggy section that followed was fairly innocuous after all the recent dry weather - a bit squelchy at worst. Then the steep trudge to the bealach began, staying close to the rusting remains of the old fence. On arrival at the bealach, the summit of Sgorr Dhearg appeared, complete with a little mid-day mist. In the other direction, the zig-zag path leading up to Sgorr Dhonuill could be made out. 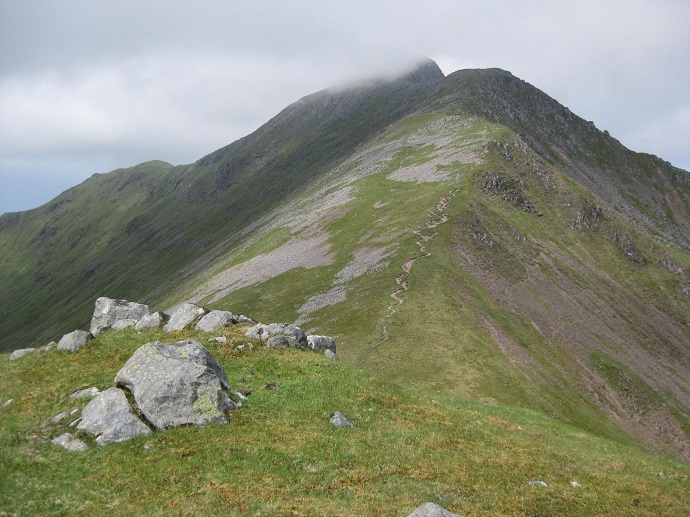 Quite often it seems that the only people I encounter all day when out walking are at the very highest point. This was the case today - two Australians arrived at the summit of Sgorr Dhearg from the south just as I came up from the west. One of them was on the phone to his wife in Australia 10,000 miles away! The patchy mist allowed a hazy view down to Sgorr Bhan with the Pap of Glencoe and Loch Leven behind. The summit was adorned only with a modest cairn on the remains of an old trig point. As I headed back to the bealach, Sgorr Dhonuill was now clear of cloud, and the ridge leading to it looked very fine. 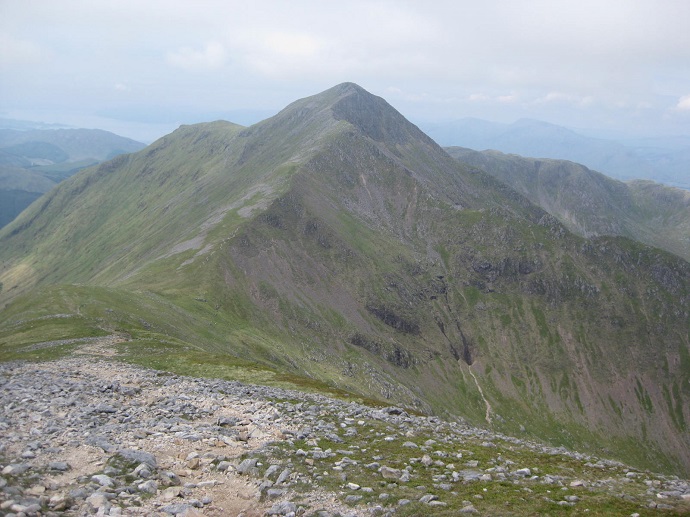 The final approach to the summit of Sgorr Dhonuill was steep and rocky. The path ran quite close to the cliff edge, allowing precipitous views to the north. Looking back towards Sgorr Dhearg, the ridge looked just as good as it had done from the other side. The narrow rocky path continued right to the top, at one point perhaps coming a little too close to the edge for comfort. The summit was quite spacious, however, with a cairn and plenty of scope for finding a picnic spot with a fantastic view. Loch Linnhe stretched away to the south. And to the east, the backdrop was now formed by Bidean nam Bian. The onward route westwards from the summit looked inviting. However, as I was unsure of the way down off of the ridge and through the forest in that direction, I decided to stick with what I knew and go back the way I had come. The steep path from the summit was fine in descent, and route down from the bealach was much more relaxing than it had been in the opposite direction. Now the sun was shining on the rocky flanks of Sgorr Dhonuill. The potentially boggy area now held no fears, so I could afford to admire the majestic location. The path through the forest provided a delightful end to another fine day in the hills.