Windy, blown to the ground on Causey pike

Windy, blown to the ground on Causey pike

The target for this walk was the Coledale round, but the weather had other ideas.
the forecast was for strong winds, and it was windy slogging up the slope of barrow, but the summit was more than windy, but once off and in the lea of the hill it was ok, I skirted round stile end and then climed outerside, again no drama until the summit when I was exposed to the full force coming down the valley,
Down onto the sail pass path and all quiet again, crossed over and up the path to causey pike with the aim f grabbing that top then follow the ridge over scar crags and sail but on cresting the ridge the wind was immense and i ended up virtually crabbing along with hands on the ground trying to keep my balance and falling forward when the wind died momenterily. it was scary so after getting to the top of causey pike i retreated back down the way i had come and went for a walk around the base of catbells and returned along the derwentwater shore path. 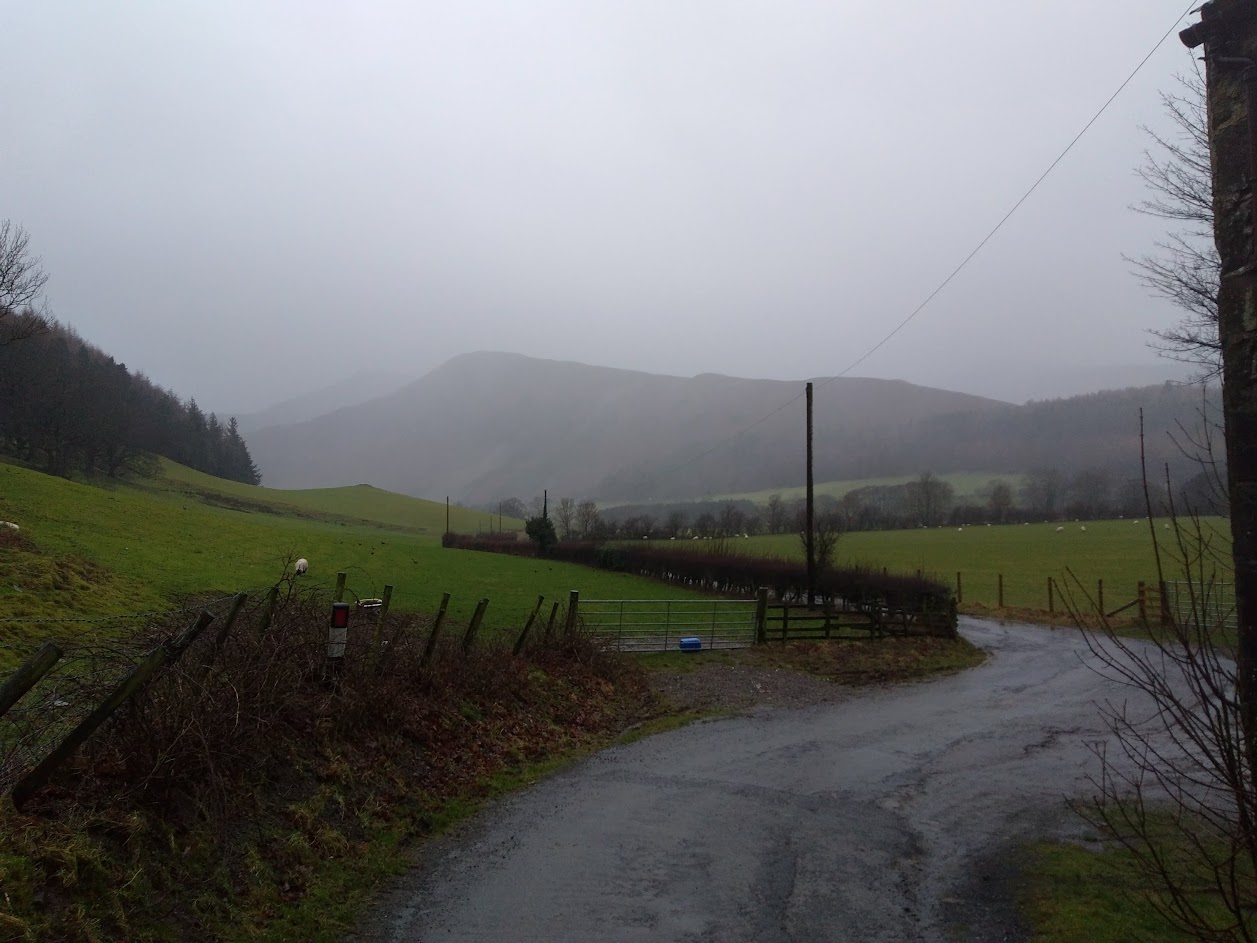 On the walk in from Portinscale, its raining heavily( normal january weather for the lake district) and Barrow looks high enough as the higher fells around it are in the cloud above, the route up follows the length of the ridge from right to left. On the ridge of barrow, the rain has eased, looking back at Portinscale and keswick beyond 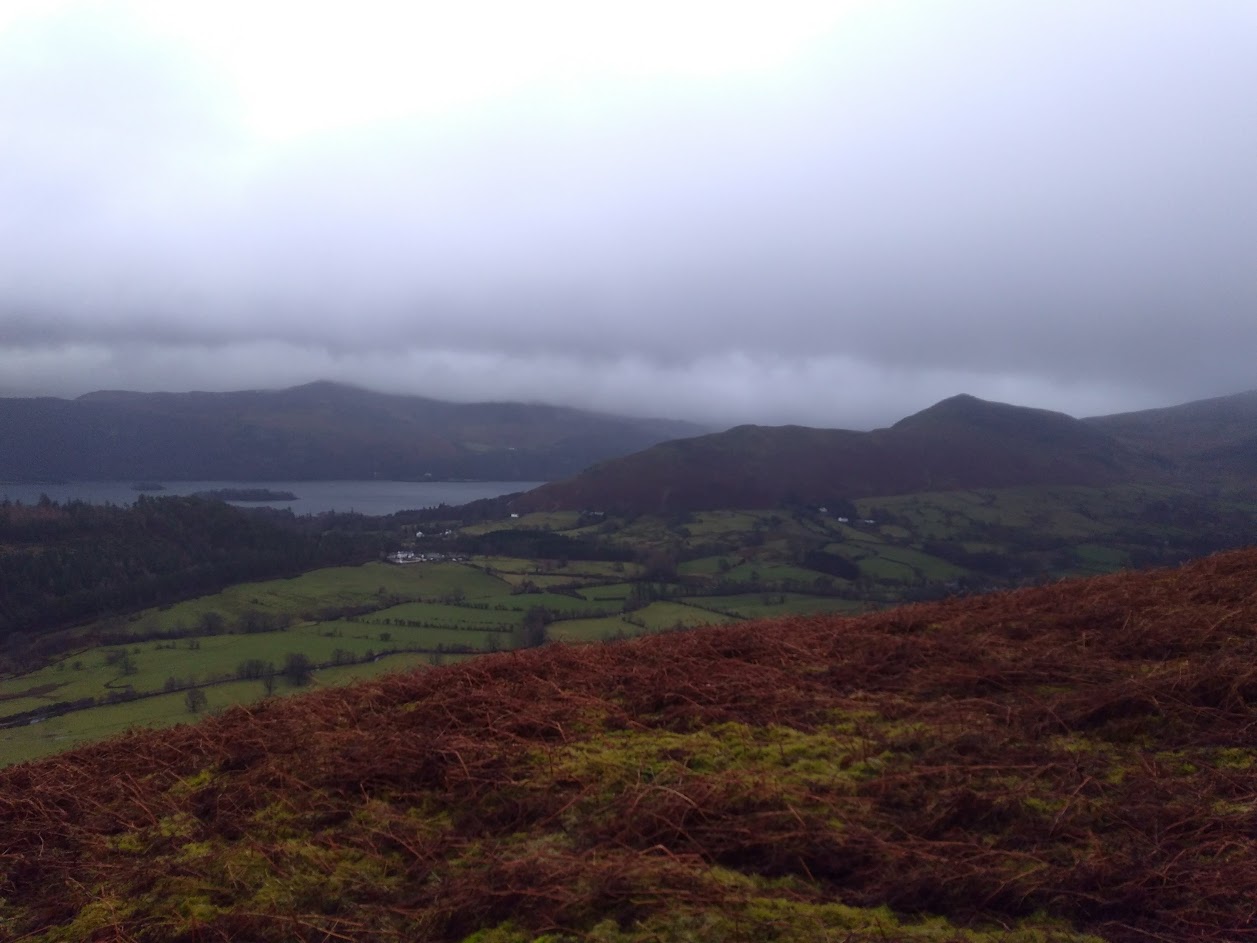 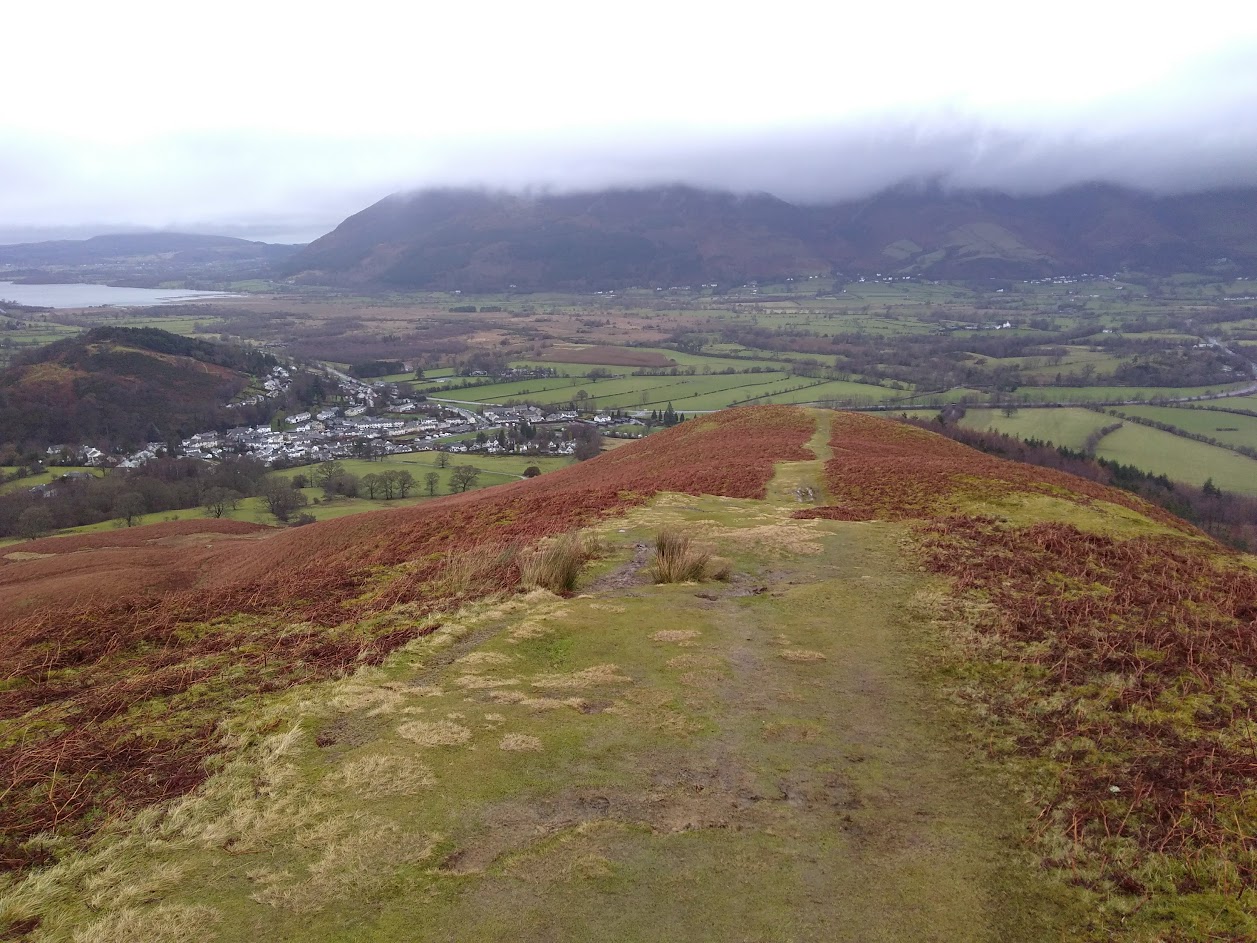 stopping for a breather and its actually brightening up a bit 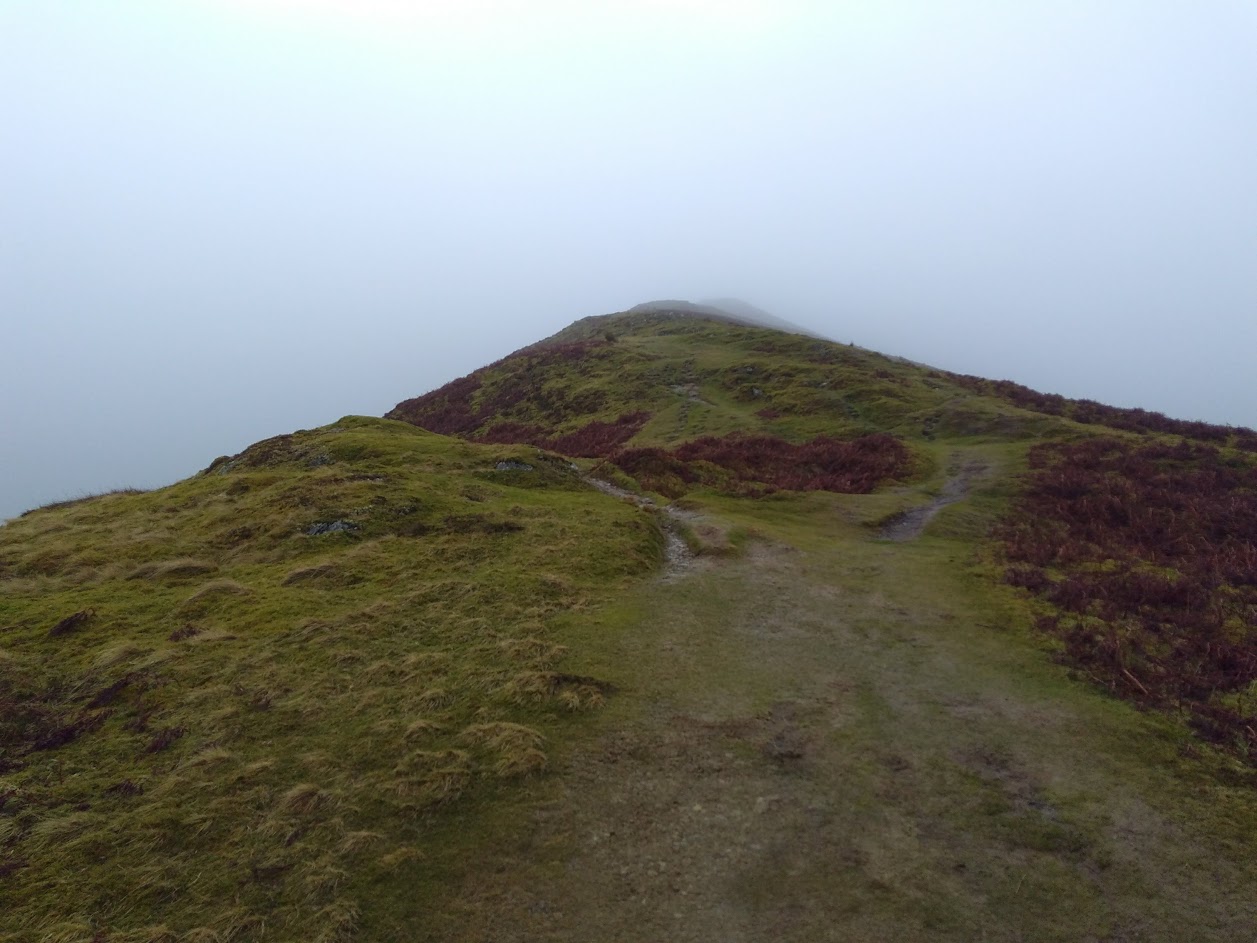 But the cloud is still touching the summit of Barrow 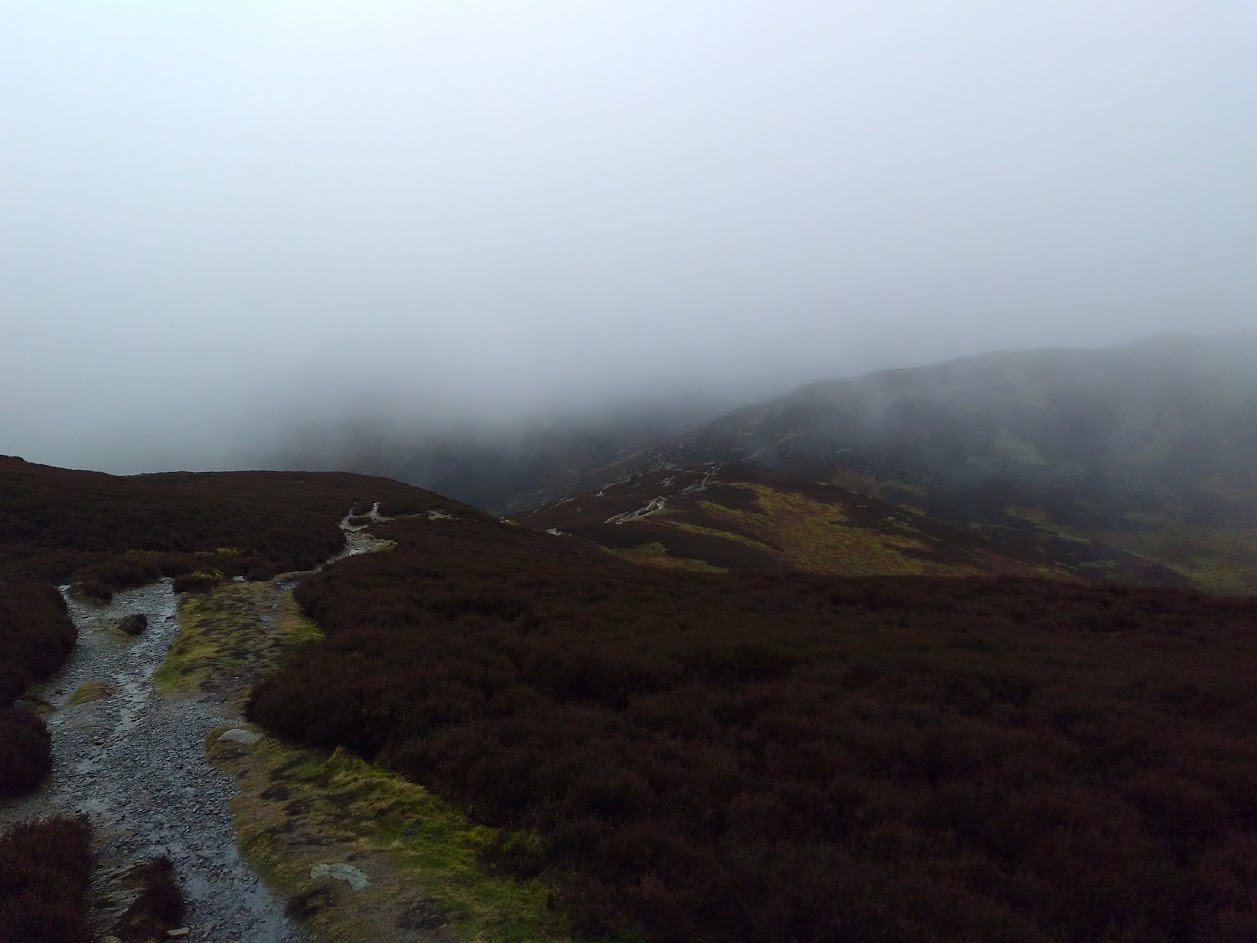 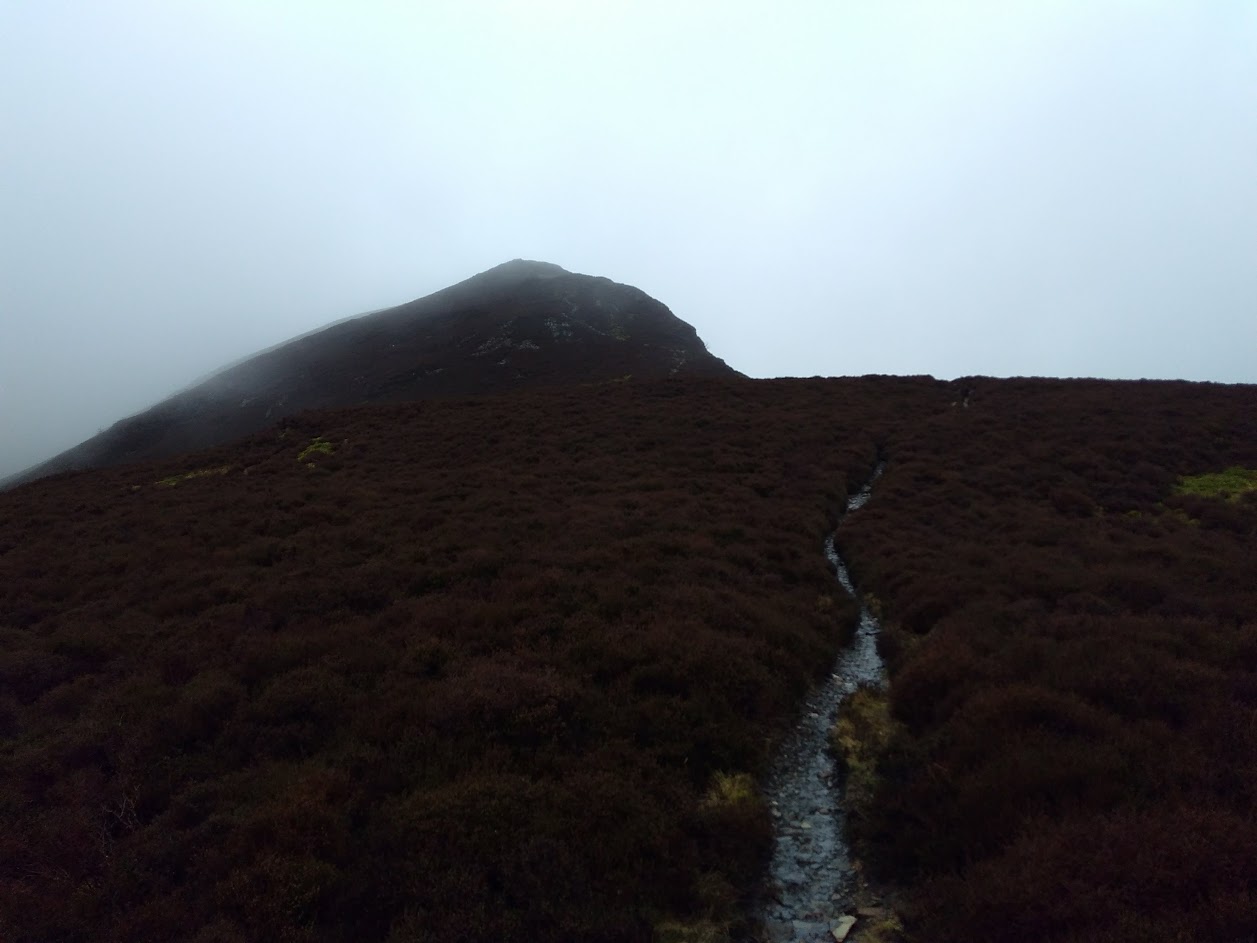 the climb up the east ridge of outerside,

On reaching the top of Outerside I was hit by the wind and spent several minutes ( it felt like just bracing myself against the wind and trying to carefully step forward without stumbling,
was glad to drop down slightly and get out of it 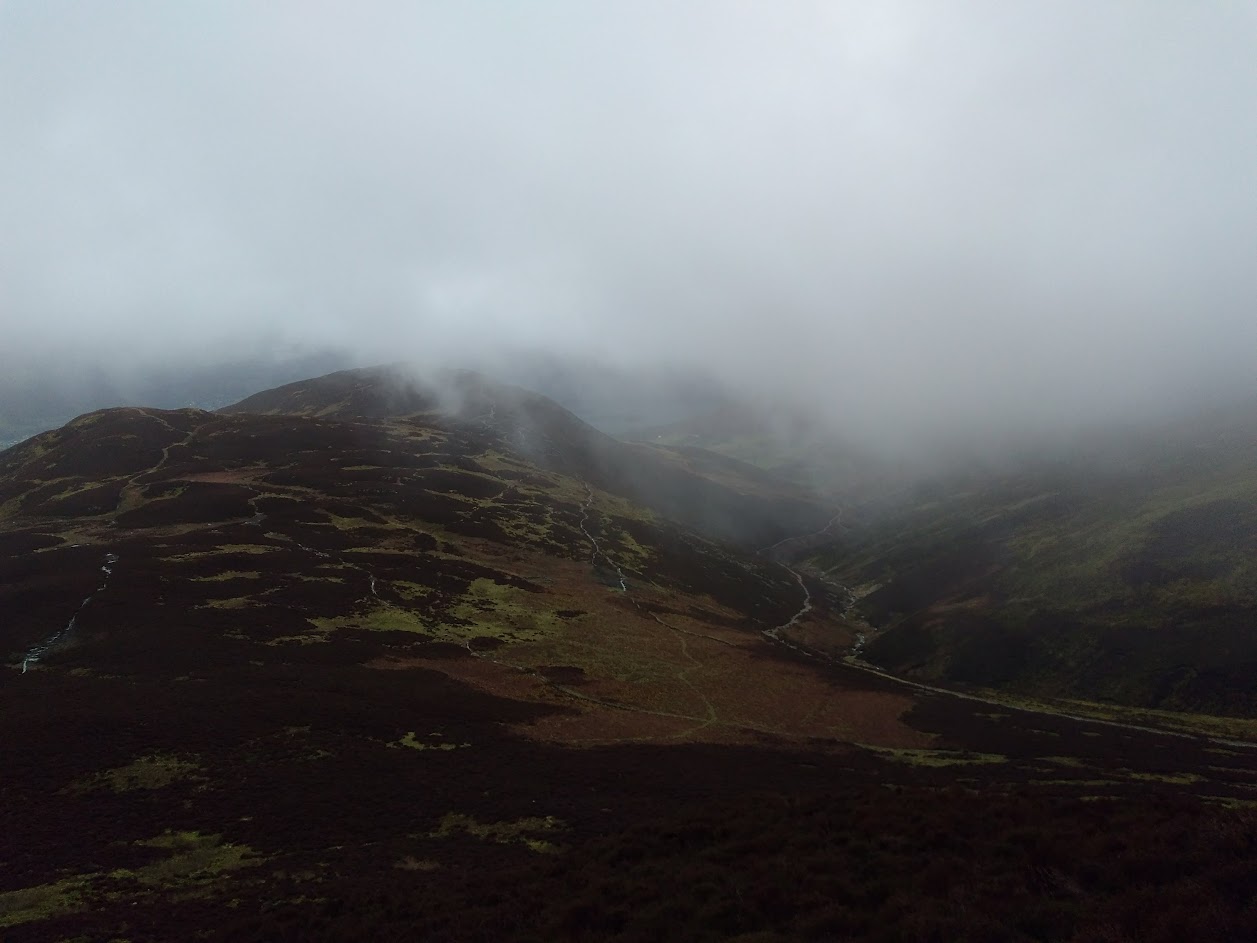 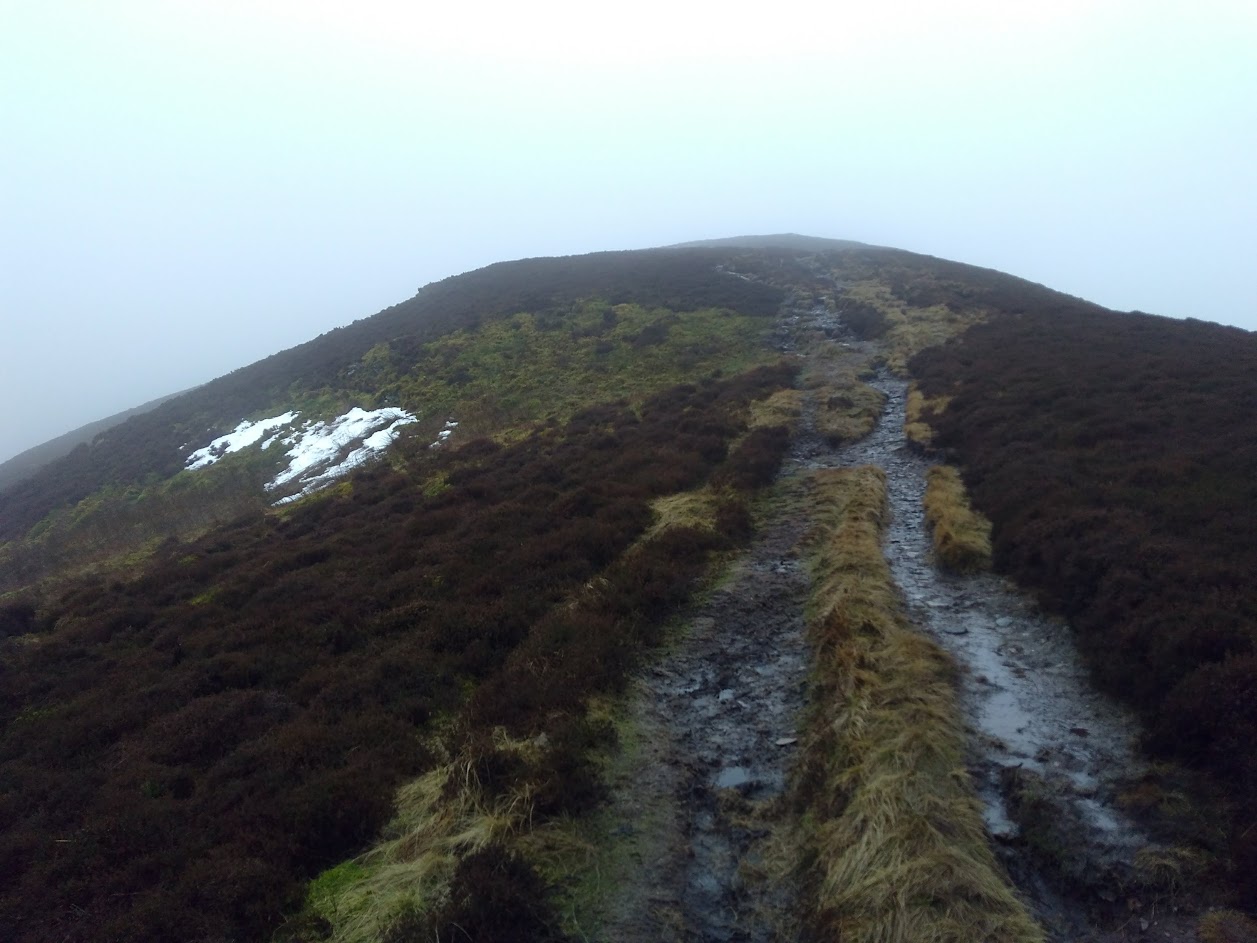 I struggled up and down the dips and small tops of the top of Causey pike bracing against the wind, it was on my back but the ridge is narrow and i was worried i would stumble and pitch myself down the slope. 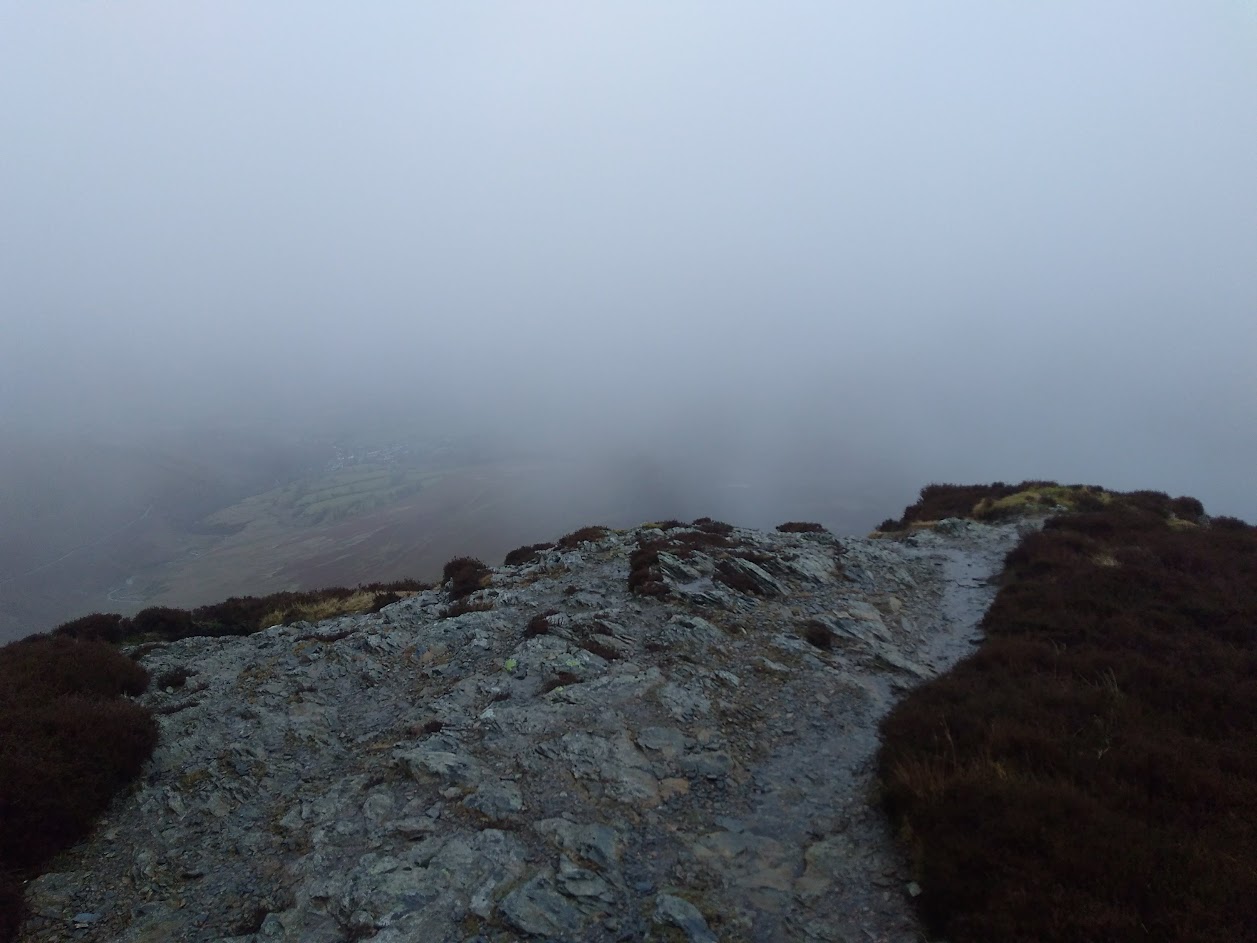 the summit of causey pike, I was rather close to the ground here, buffeted by the wind. the clouds were whipping past as the wind accelerated over the ridge. very scary

I turned back and the found walking into the wind even worse as I could see the clouds rushing up towards me from below like i was falling through them, disorientating.
at one point the wind blew my woolly hat off and i crawled to grab it where it had landed, that was the point I decided to head down and not try to continue the ridge towards scar crags and sail 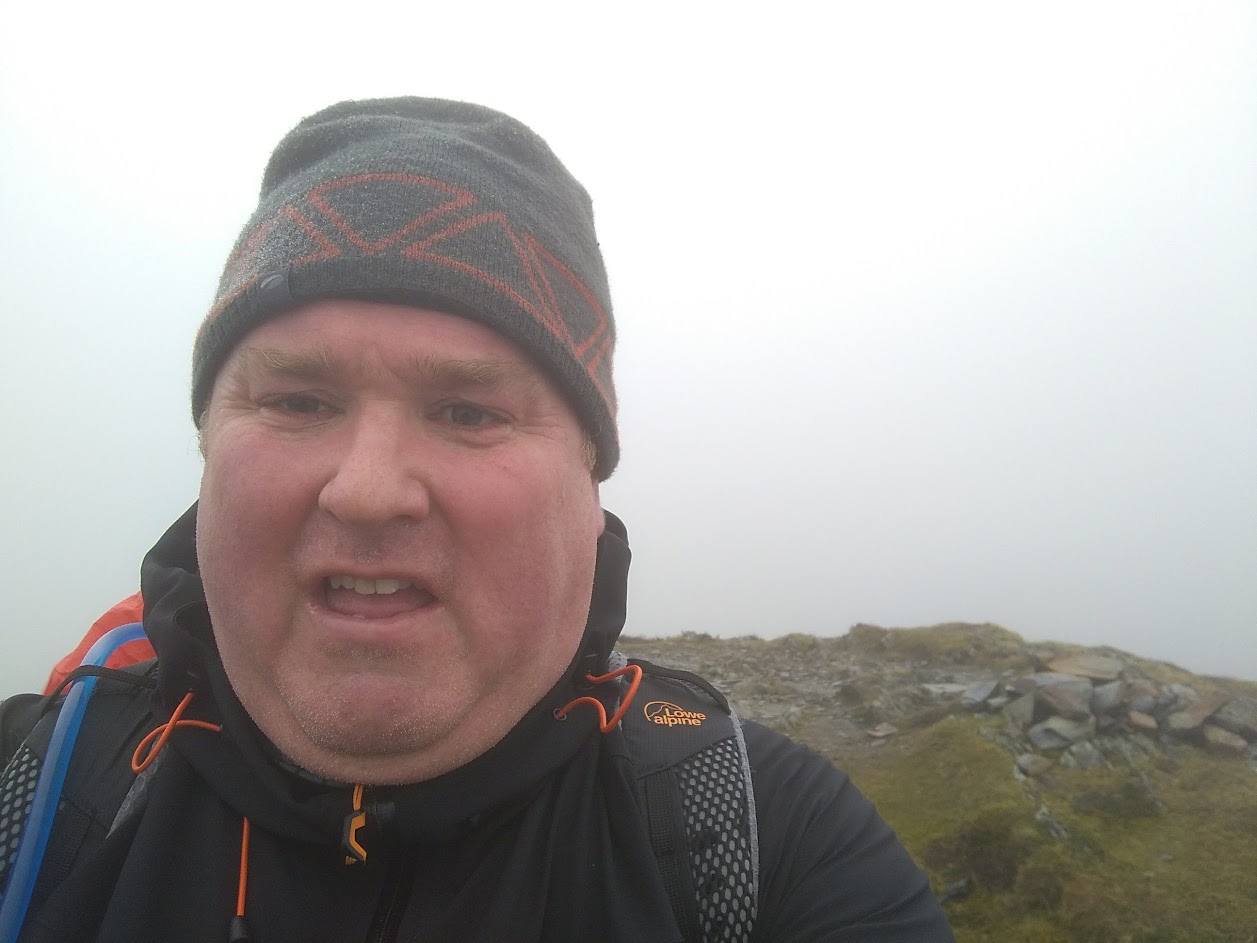 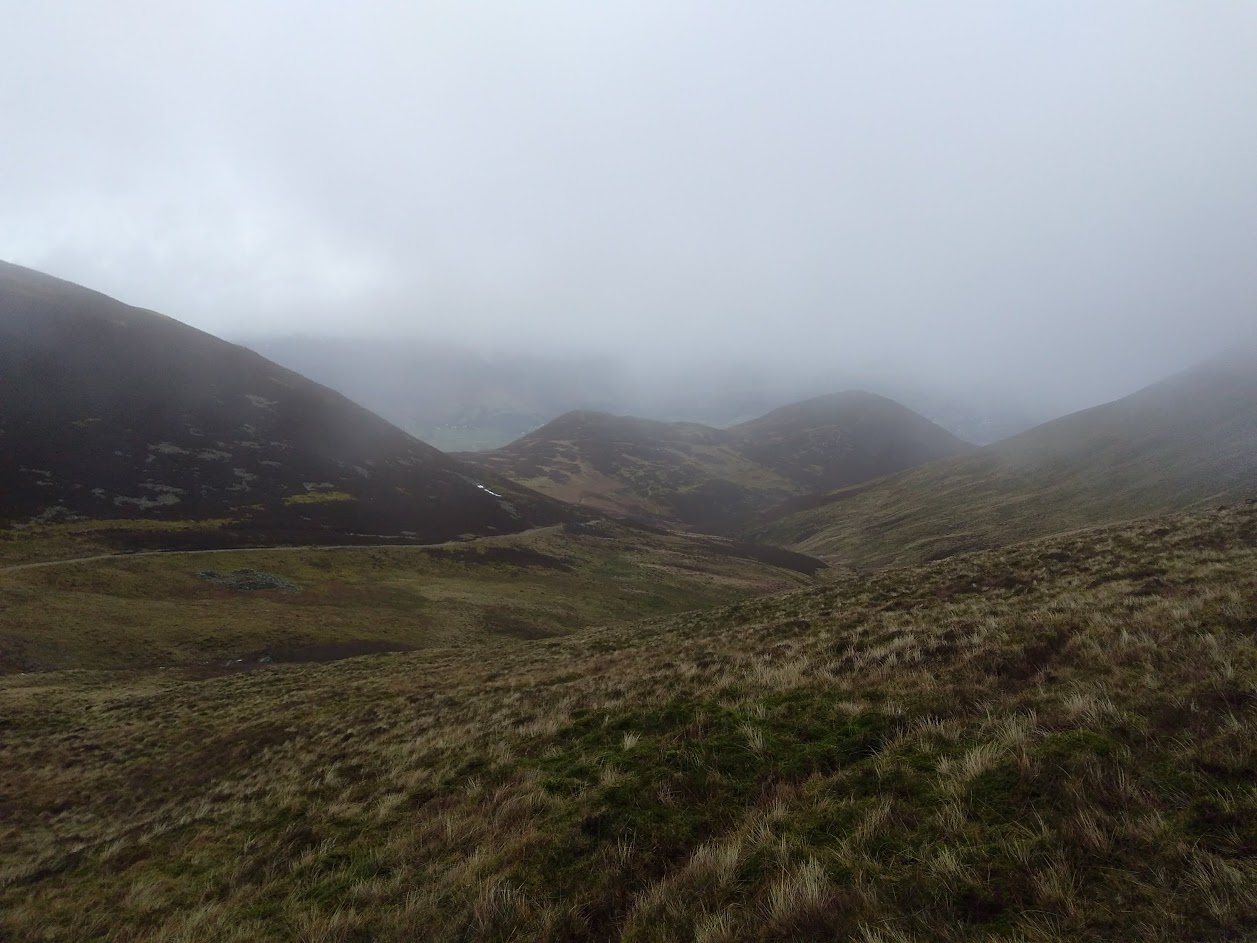 retreating back down to the sail pass path , outerside to the left and Stile end and Barrow to the right 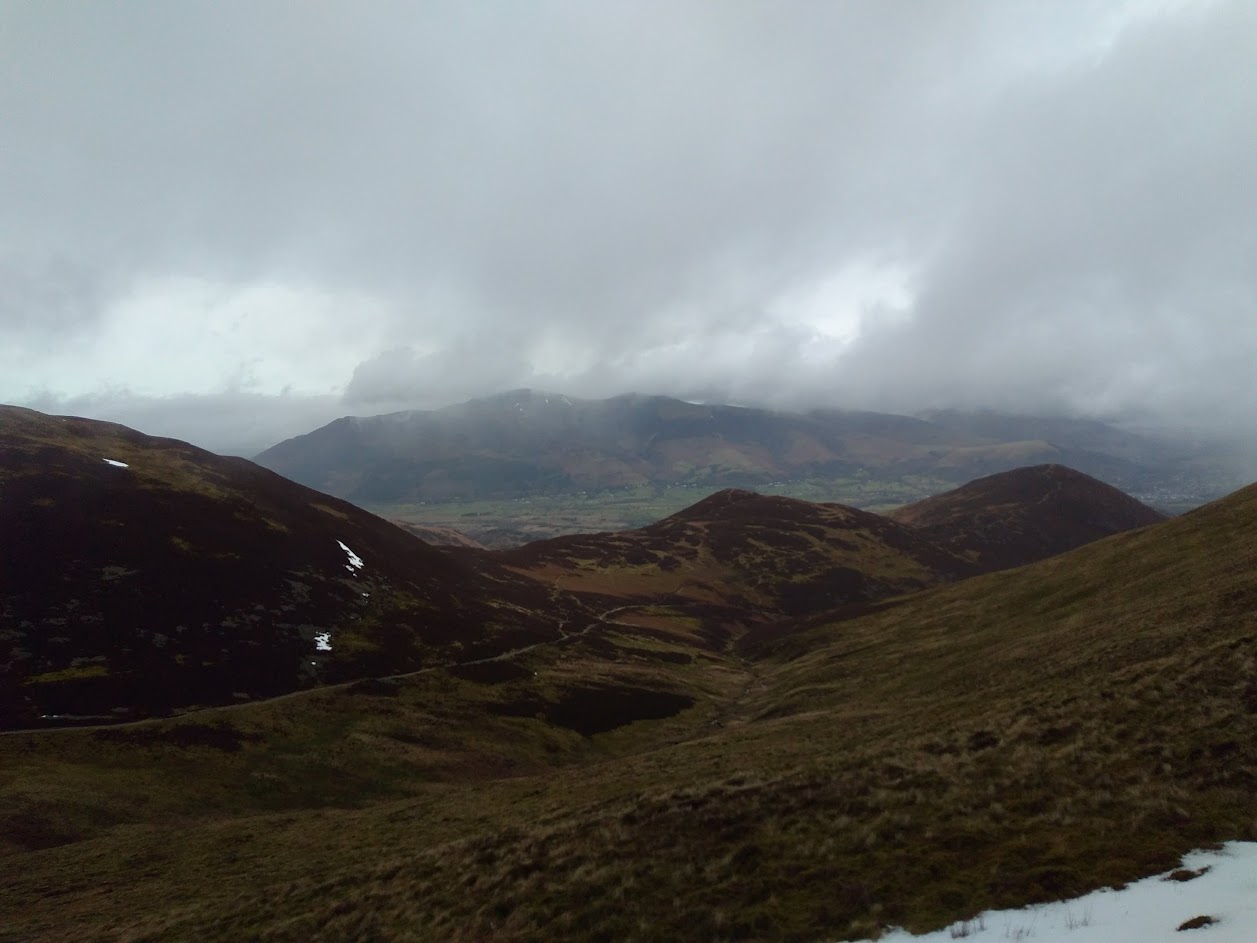 then the cloud lifted slightly and Skiddaw came into sight. looking back up the sale pass path, all is calm down here and its stopped raining, what was the drama 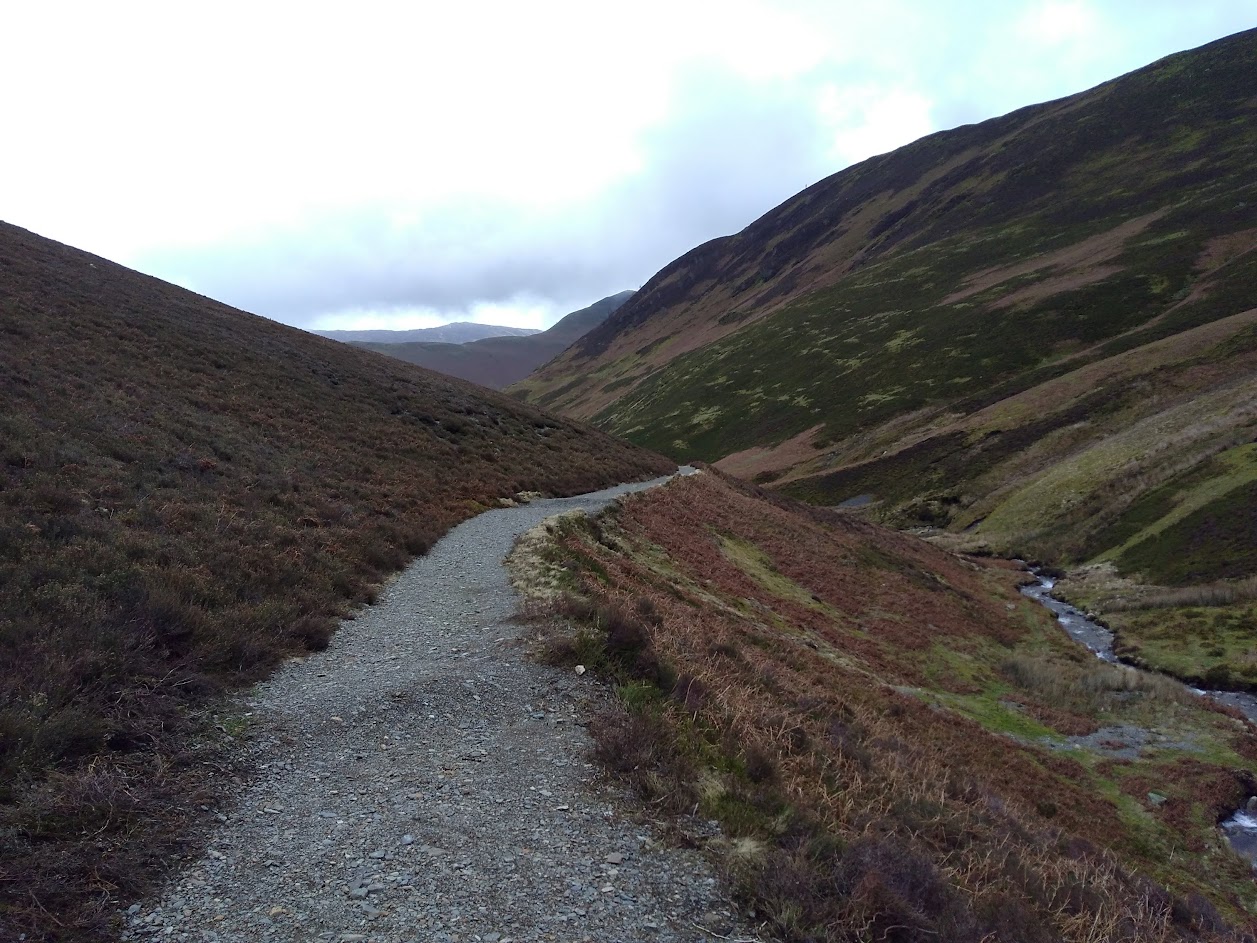 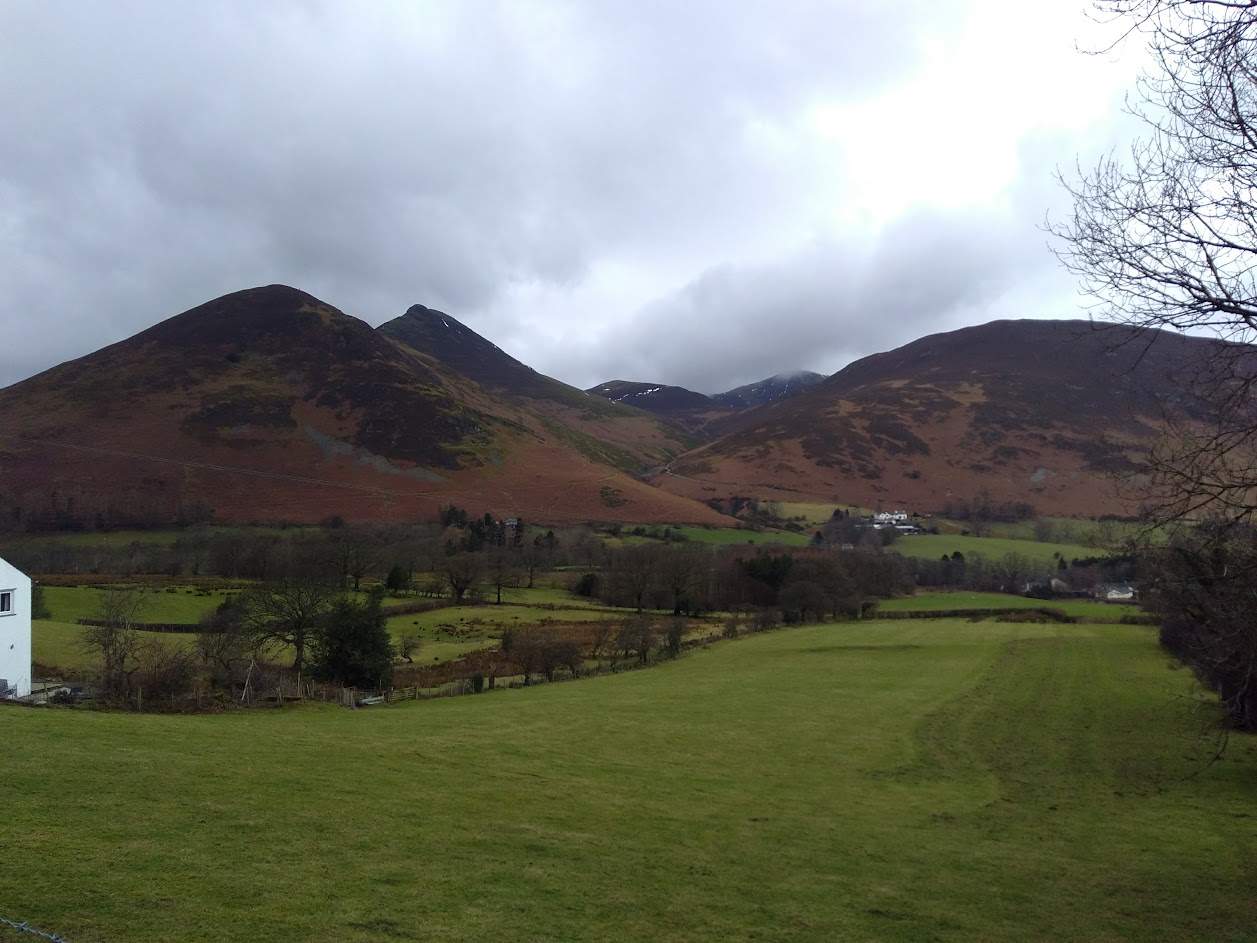 heading for derwentwater and a look back and the summit is clear, ( causey Pike is the fell with the knobbly bit on the top) still blowing a Hoolie, i consoled myself knowing i had made the right decision

Re: Windy, blown to the ground on Causey pike

You were as well turning back as the whole ridge along from Causey Pike is wide open to the weather as you found out. Well done for getting so far

Re: Windy, blown to the ground on Causey pike

aye, it was the best decision.
went back on may day bank holiday and had horizon to horizon blue skies
quite a difference