After an enjoyable but easy day around Inverness on Wednesday, we got planning for a bigger hillwalk on Thursday. The weather forecast was good, but with light winds and high temperatures we weren't sure about taking on anything too strenuous. Before heading to bed we decided on Beinn Enaiglair - a Corbett near Braemore Junction.

But Thursday dawned and the view from our holiday cottage was so beautiful that we decided to chance a bigger route, and hope that the heat wouldn't be too much. Sgurr nan Clach Geala and its two neighbouring Munros on the same ridge fit the bill... a first trip to the Fannichs was in store!

Decisions all seemed to be at the last minute this morning, and we ended up opting to do the WH route in reverse - which meant a path for more of the ascent. We'd certainly recommend doing it this way round.

One other car in the layby when we arrived (we later saw them camping down by Loch a' Bhraioin). Cloudless skies and despite a welcome breeze, a few horseflies were out while we booted up. Suncream soon applied, and we set off on the track to the south, along the side of a forestry plantation. The track diverts into the trees for a few hundred metres, providing welcome shade of which we knew would be scarce for the rest of the walk. At the other end of the plantation the track emerged into the sunshine at the outflow for Loch a' Bhraoin: After a dry summer we reckoned the burn crossing higher up would be easy enough, so no need to divert onto the ATV track (though we used this on the return - see later). The stalkers' path climbed gently away from the loch: After rounding the lower slopes of Sgurr Breac, the path came close to the Allt Breabaig, with some lovely waterfalls and pools: Across the burn, grassy Meall a' Chrasgaidh (hill no. 3) and rocky Sgurr nan Clach Geala (hill no. 2) awaited. As expected, the burn was easily low enough to hop across: 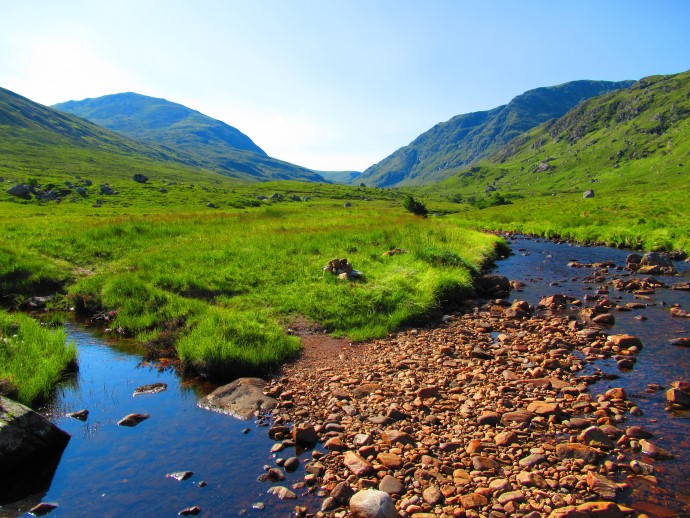 Beyond, the path ascended (very) gradually 3 easy miles well above the burn, with a small cliff near the top of the glen providing unexpected and welcome shade (in morning light only). Up at the messy bealach - with several coires and glens branching off from it - it was time to leave the path and head up the slopes to the east. We kept left to avoid a small band of crags which might have made a direct ascent awkward. View up: After escaping from the slightly squelchy bealach, the climb was steep but dry, and over quite quickly - mostly pathless but with occasional bits and pieces of something to follow. Reaching the ridge at Cadha na Guite, we first headed right to Sgurr nan Each, the first hill of today's trio. Ridge to Sgurr nan Each: A short, enjoyable ridge walk later, we were admiring the views south to Loch Fannich and the Torridon Hills - the latter a region we've yet to visit, but on the list! The broad glen stretching down towards Loch Fannich was particularly impressive: This was as far south as we'd go today. Retracing our footsteps to Cadha na Guite, the way up to Sgurr nan Clach Geala was obvious. The graceful ridge followed today's common theme of cliffs to the east with grassy ground to the west - a useful combination giving great views without having to watch where you step. Sgurr Mor (highest of the Fannichs, but not part of today's route) on the right: Earlier on, my partner thought he'd heard a few ptarmigan calls, and further up I stumbled across the real thing. Unfortunately it had a bit of a limp (unless it was doing the "follow me away from my children, I'm injured and therefore easy prey!" act), so we tried not to bother it. This diversion as well as a few frogs made the climb to Sgurr nan Clach Geala feel quicker than expected. It wasn't as hot as feared, with a constant breeze keeping things cool, and a few large clouds around. Happily the sun always seemed to come out again just when we got to the best viewpoints - in contrast to the previous day when we seemed to be stuck under an annoying cloud with blue sky over all the nearby hills!

Superb summit views, with jagged An Teallach to the north: 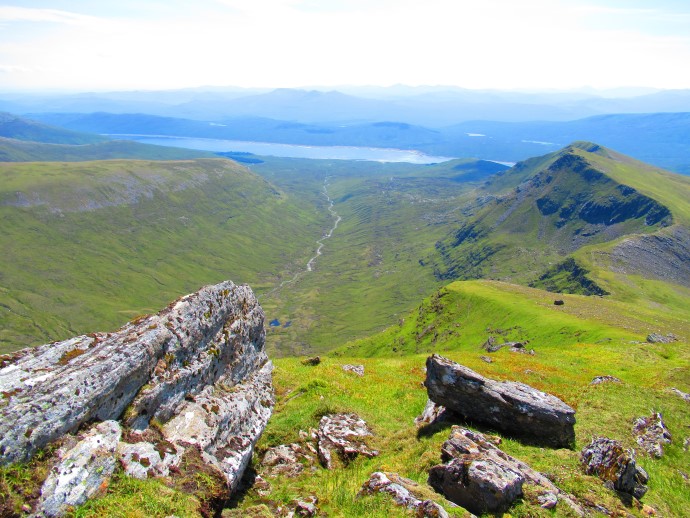 Sgurr Mor might tempt us back for a future visit to the Fannichs. There's a marvellous sense of wide open space about these hills: The ridge continues on the north side, still straightforward underfoot, with good views back to the summit: Eventually a path descends through a little scree towards a lochan and a large boulder - the Clach Mhor na Beuchdaich: Down by the lochan: This lochan is part of the bealach between Sgurr nan Clach Geala (to the south) and Sgurr Mor (to the east), but we were heading for Meall a' Chrasgaidh (to the north) which involved a further short descent across a nondescript expanse of grass. The reascent to meall a' Chrasgaidh is barely over 100 metres, with good views down to Loch a' Mhadaidh from part way up: 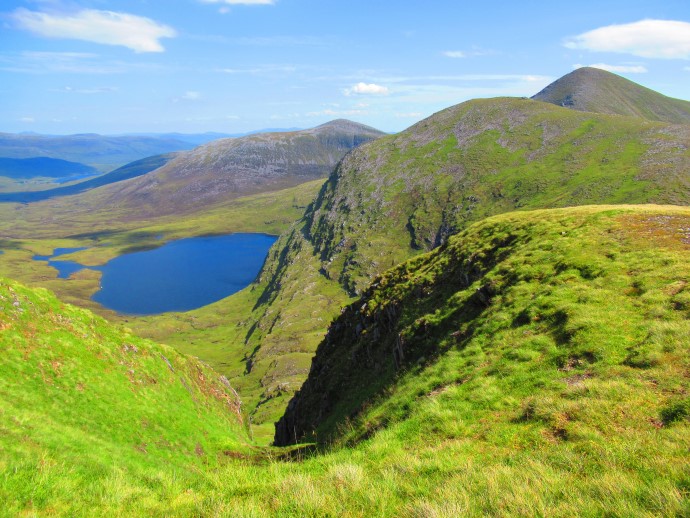 Views from the sprawling summit are similar to Sgurr nan Clach Geala, without the dramatic foreground. Heading west, we enjoyed the gentle gradient and easy ground while we could: The gradient gradually steepens, and it's pathless all the way back to glen level. We've had worse, but it's a pretty steep and unrelenting slope (probably not much fun in ascent) on grass and heather. Lower down there were a couple of wet patches. Looking back to Sgurr nan Clach Geala: Looking down on the glen from above, we were able to make out a faint track running up the glen at a higher level than the path we used on the outward route. This is the continuation of the ATV track used at the beginning of the WH route (to avoid fording the burn). We made a beeline for this - turn right and you can follow it all the way back to Loch a' Bhraoin. A stop to paddle at one of the many waterfalls and plunge pools en route was obligatory, of course! A fantastic day out - our first day in the Fannichs ended up being quite different to my expectations. Thanks to the wind it was a much more comfortable day than I thought it was going to be. As for the hills themselves: the ridge was more straightforward than the contours on the OS map suggested, but the most enjoyable part was the sense of scale. A perfect place to "get away from it all"...