This is my first walk report and I don't really know whether it works for me in this foreign language. But I like to document my reports somehow. Another reason is that I like the idea of sharing experiences with like-minded people, although this is which makes me hesitate as well because there are so many experienced munro baggers out there I hardly can compare with. And I feel a bit like an intruder into a secret world and I wonder whether I will find my place and how it will reveal itself.
Certainly, there had been other munros I could have chosen, but may be just because of all these undercurrent uncertainties I decided to write my first report about Meall Ghaordaidh: it was not very spectacular. Other walks, more impressive, more adventurous and emotional have to wait until I feel a bit more confident, I have decided.

Meall Ghaordaidh was not on the top of my list and I have planned it just in case that I would have some time left at the end of my super-holidays with my epic ride from Land's End to John o' Groat in this super-summer.

Genrally I don't like walks going up and down the same path, and the mention of quagmire in the description couldn't cheer me up neither. So, to be honest, this munro didn't attract me really, but if I wanted to complete the munros - what I wasn't yet so sure about - I had to do it one day, anyway.
And as it was not far away from the nice and friendly Lochearnhead Hotel with beautiful views to Ben Vorlich and Stuc a'Chroin which brought up a lot of memories, it seemed to be the perfect munro to finish my holidays after my epic walk in the Lawers the day before. It was a quiet and peaceful morning at Lochearnhead and the sun promised another fine summer day. 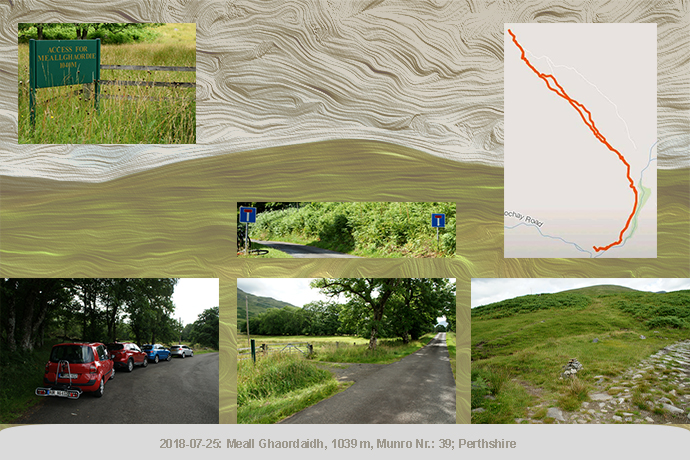 With the walk description of walkhighlands safed in a PDF-file on my mobile and apparalled with my usual walk-equipement, which I think is always too much, I made my way through Killin and to the power station were I had to turn left and got irritated: On both sides of the road was the traffic sign indicating impasse

and I was wondering and hoping that I will at least reach my destination.
When I arrived at the parking I was happy to find a last spot to squeeze my car into. 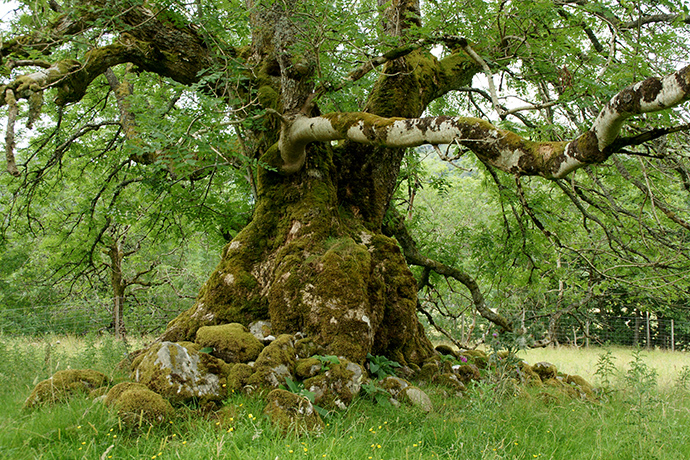 With the sign at the gate, the start was easy to find. Soon I reached the "fine ash trees" with their impressive roots, stems and branches covered with moss and sheep grazing around. I took my time to enjoy this pastoral scenery and slowed down my pace for a while to take in the peaceful atmosphere of the morning.
I passed the shielings, came to the stile and followed the track as described which made me feel more relaxed and confident.
However, I was yet not quite sure which of the surrounding moutains was Meall Ghaordaidh. I got quite attracted by the structure of the Mountain to my right on the other side of the ravine, Meall Dhùin Croisg, I think it is called.
I asked a young man, already on his way back from his walk, and he showed to the left. And from where we stood I only saw a huge massive grassy hill and frowned: That is the munro?
Then he explained the way and mentioned some details I remembered from the description and said that it is a straight forward path, easy going, with good views and only very few people on the top.
Straight forward, easy going, I liked to hear that and we both resumed our walks. 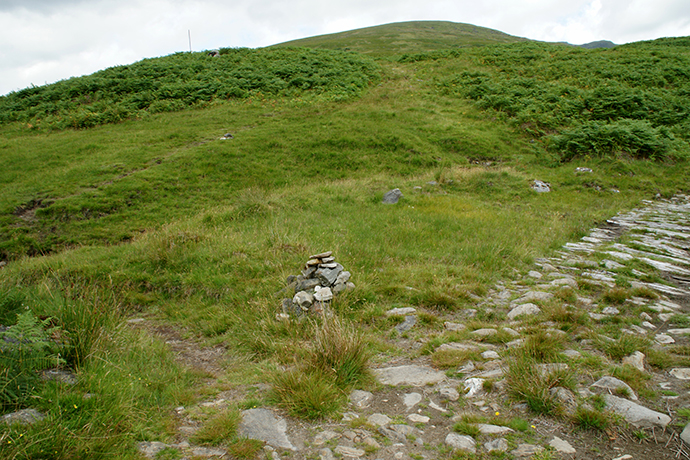 Very soon I found the cairn where I had to turn left and there was a pole and I remembered I have read about a pole, but I thought it was much closer to the cairn, and in my mind, actually, I had a picture with the pole sticking out of the cairn. "Nearby" the description said but for me it seemed quite a distance away. Tricky those little words which always cause me some confusion ...
However, for some time the walk was okay, but then I must have lost the path somehow and I was going over rough grassy ground and heather, only glad that it was dry at least, and not boggy as mentionend in the description.
From now on – actually only for the next two kilometers but it seemed endless to me – the walk became a bit exhausting. It was one of those parts of a walk when I look up, seeing the ground kissing the sky and thinking: well, can't be long anymore, but a few meters later I see a faintly different looking ground kissing the sky and very soon it becomes clear: this is one of these slogs which never seem to end, frustration --
And it was a little shock when eventually the real top of the munro came in sight, looming over the last bit of the grassy hill and I thought: Oh, no! still not there!

However, this looked much more like a munro now! 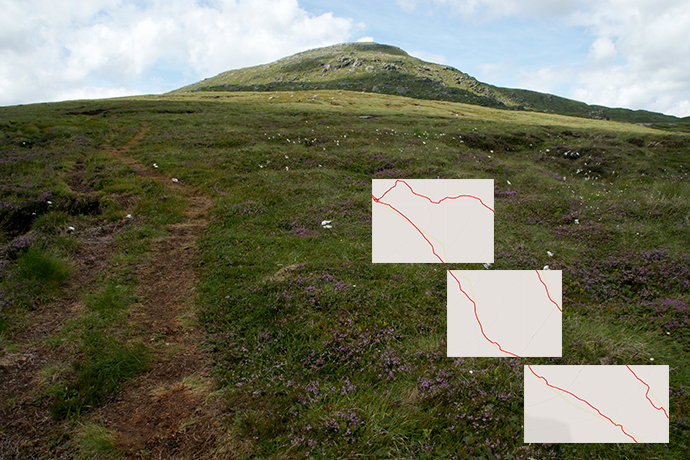 Actually I never was far apart from the path, but I didn't find my way back until I saw another walker in the distance, the second car driver, I thought. He came downhill in a good pace and I turned left and very quickly I was back to the track.
Meanwhile it has become very windy and I had to put on my fleece, glad that I had it in my backpack despite the promissing sunshine and the warmth of the early morning in the valley. 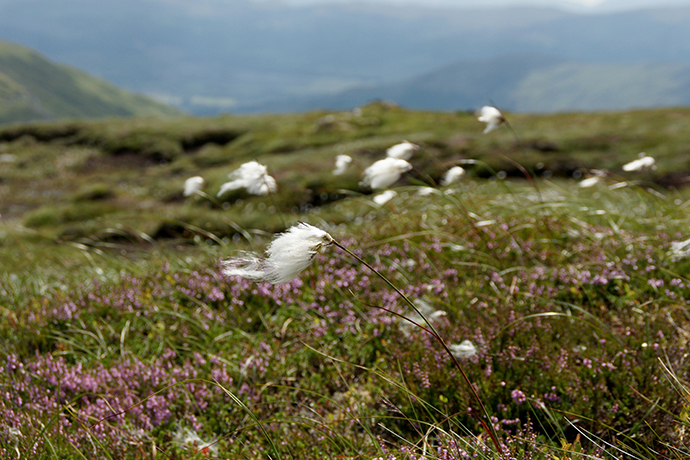 Short before reaching the "final push" over the quartzite, I encountered the last two walkers on my walk, a couple, the last of the early birds. We had a short chat about the wind and the man said that it was very stormy on the top and so it was! I was very glad that I had my páramo gilet with me because the stone circle around the trigpoint couldn't protect me against the chill coming with the stormy wind. Although The wind was pushing some dark clouds from the northeast it stayed dry and sunny at the summit. Despite the stormy wind and the chill I took my time to rest and to look around. 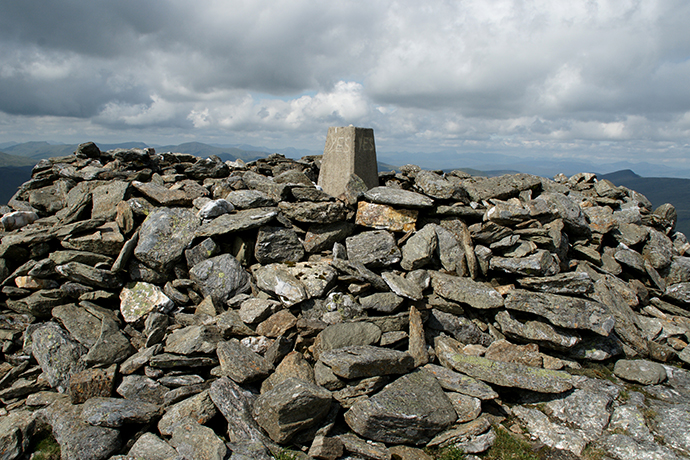 I don't know why, but the views didn't impresse me so much as usual. May be a result of a mixture of serveral reasons, but probably I was more tired than I had expected, after fourteen days of cycling and yesterday's walk in the Lawers' - so my mood was a bit low and therefore I probably was not able to value the clear view. And not being able to recognize or identify any of the surrounding Mountains was a bit boring, too. But I am glad I took my pictures at least to remember now, what I have seen and missed when I was on the summit. And without the wind and the chill it looks really nice – in retrospect. 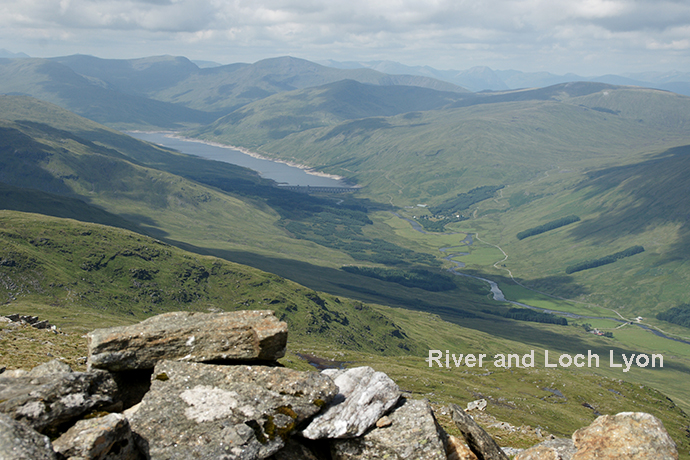 Concerning my descent I was quite confident that I would find the path. Usually I don't miss the traces when I go downhill. The path offered indeed an "easy going" and almost in no time - compared to the effort the ascent has taken - I was back at the parking. 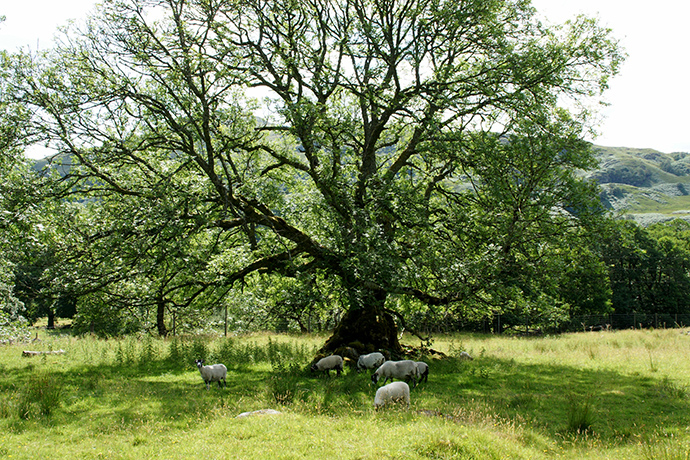 Half way down, the wind have ceased and in the valley it was very warm, so that I hardly could imagine how windy and chilly it was on the summit only about an hour and a half ago.
Taking off my dry and fairly clean boots I remembered the mention of the quagmire, but thanks to the hot and dry period the weeks before the quagmire has nearly dried out. There had been only very few boggy parts which I bypassed easyly.
I put on my Teva sandals and made my feet happy again and said goodbye to the Mountain about which I had not such a good opion, but which provided me another good walking day out in nature.

So, finally I was glad that I did this walk not only to tick off my 30th Munro. 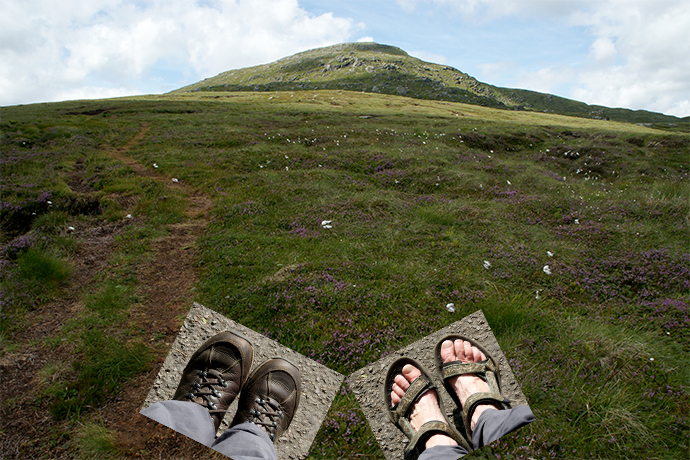 I finished the day at The Dochart's Fall Inn in Killin with a tasty soup, reflecting my impressions and enjoying the lovely scenery of the Falls of Dochart, knowing well, that I'll be back soon again.

To sum it up, I can say that the most impressive memories I keep for this walk are the pastoral atmosphere at the start, the loooong slog over the grassy ground and the stormy wind on the summit. 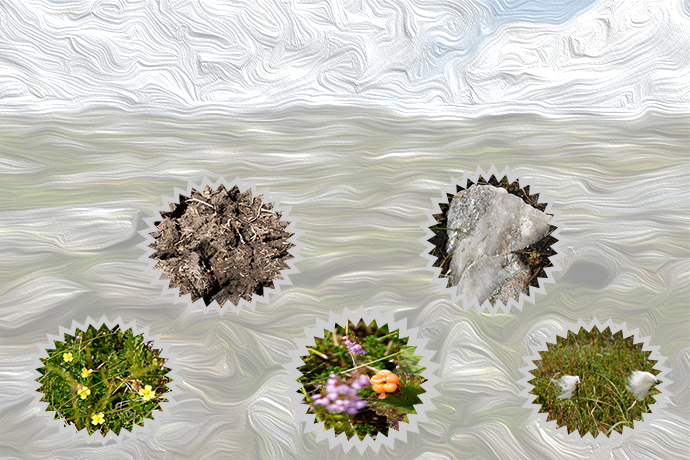