The Munro swing of Lochan Uaine

The Munro swing of Lochan Uaine


After a well-earned day of rest to restore my forces after the Fisherfield "Marathon", I was eager to get back into the hills, and the plan was to tackle Beinn Dearg and its three neighbours Cona' Mheall, Meall nan Ceapraichean, and Eididh nan Clach Geala. The weather was still very beautiful, and the car park at Inverlael Bridge quite full. The track through the forest above the left bank of the river Lael allowed fast going. near Glensguaib, I crossed paths with a Yorkshireman who had walked up the other river bank. We walked together for a little while, chatting, but I soon noticed that we'd rather prefer to walk at different speeds, although I was not sure if I pressed him on or slowed him down. I finally suggested to walk on individually, to which he agreed. After only a few minutes, he was already quite far behind me on the path, and soon not to be seen anymore at all (because he forked off to walk clockwise, as I would learn later). Looking back into Glenn na Sguaib One of the waterfalls in the Glen

The track had narrowed down to a path at the end of the forest plantation, but still progress was quite fast. The path rose steadily up to Lochan Làthail, from where it began to rise more steeply. Lochan Làthail from further above.

Another small lochan just before reaching the Bealach an Lochain Uaine. Click to see large.

After a short effort, I reached the Bealach an Lochain Uaine. Unfortunately, I did not take any decent photo of the Bealach with its Lochan - and yet I passed it a total of three times. I briefly crossed the drystone wall to have look down the other side of the Bealach, then got back to its north-western side.

Looking down towards Loch a' Choire Ghrànda, Cona Mheall to the left, Beinn Dearg to the right. Click to see large.

When I started climbling Beainn Dearg, a group of four came already down, I would meet them again later. On the short and rocky climb to the summit, I passed a Scotsman who went up slowly, but with a very determined look on his face.
On the summit, an Englishman kept taking photo after photo. He had been up here before (coming to the Ullapool area for 40 years now), but never in beautiful weather like this. We had a nice chat, soon to be joined by the Scotsman, about almost everything, from identifying the surrounding mountains to inspecting dams as a diver to jobs in Africa to hydropower to the world and the glum outlook for most of its inhabitants. We talked and talked and enjoyed the panorama for a full hour! Seana Bhraigh's Creag an Duine seen from Beinn Dearg, to the right behind it in the distance is Ben Klibreck, I think. Stac Pollaidh in the middle, to the left possibly Ben Mòr Coigeach, to the right possibly Cul Beag We finally managed to say our goodbyes and started the descent. The Scotsman suprised me by going down many times faster than going up. Even though I left the summit first, he almost caught up with me by the time I was back at the Bealach. There, I met the four guys again that had come down Beinn Dearg when I went up. They were on their way back from Cona Mheall, now tackling Meall nan Ceapraichean.

From the bealach, it was not far to Cona Mheall, and I soon reached the summit after having crossed some remaining snow and the boulderfield of its upper slopes. The big bulk of Beinn Dearg from Cona Mheall 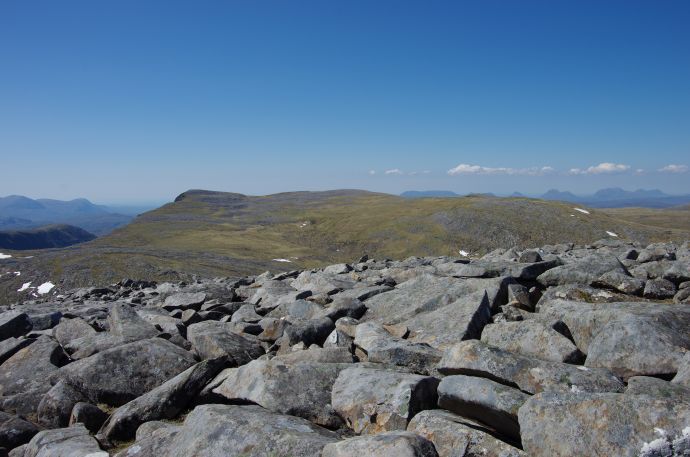 When I left the summit, the Yorkshireman just arrived and told me he had walked clockwise, and now had only Beinn Dearg left to do. A short way down, 3 men with a dog came up, and caught up with me again soon after, not having spent any time on the summit. The dog was carrying a stick in its mouth - it had carried it up four Munros on that day...

To get back to the Bealach an Lochain Uaine, I had to cross the snow again: No trouble at all to cross.

The Bealach was not only like a place for a swing-by manoeuver for Munros, but also much like a village square - a meeting point for everyone. Again I met the four guys who now came down the slopes of Meall nan Ceapraichean and told me that the were not able to find a way down from the fourth Munro, and so they were coming back this way. This puzzled me for quite a while, but I think I misheard them and they were not able to find a way down TO the fourth Munro, which would indeed prove to be a bit tricky.

The short way up Meall nan Ceapraichean was no problem at all, and I soon had my third Munro of the day bagged. Looking down to Gleann na Sguaib, An Teallach in the left background, Ullapool in the right background The finishing line? Not yet, but a nice quartzite line.

It had become a bit more windy and somewhat chilly by now, so I left the summit soon, crossing over Ceann Garbh and Ceann Garbh Meall nan Ceapraichean before trying to make my way down to the bealach south of Eidih nan Clach Geala. This required indeed some navigation and, on the route chosen by me, a little (very little) scrambling. Passing a little waterfall on the way down.

From the bealach, it was an easy walk up Eididh nan Clach Geala, at only 927 m the lowest Munro of the day. Seana Bhraigh (below the cloud) from Eididh nan Clach Geala

The way back down into Gleann na Sguaib was quite easy, and it was now that it dawned on me that I must have misheard the four guys. They had never been on Eididh nan Clach Geala that day. A last look out to Beinn Dearg on the way back to the car.

The rest was just speeding along the path, joining the outward route in Gleann na Sguaib, then along the forest track back to the car, where I arrived at 9 pm after a long day out.

2018-05-30 4. Wanderung_reduziert.gpx Open full screen  NB: Walkhighlands is not responsible for the accuracy of gpx files in users posts