There and back again - Seana Bhraigh

There and back again - Seana Bhraigh 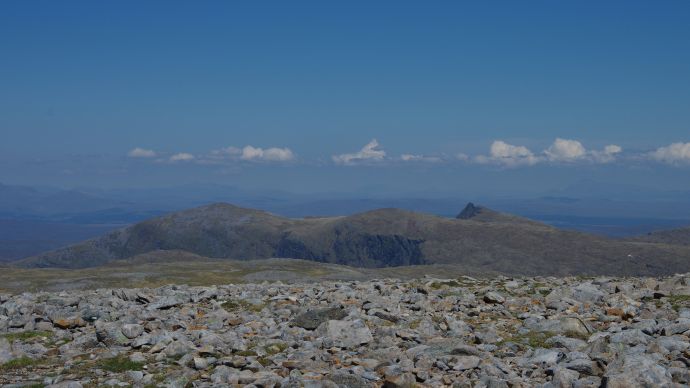 My target: Seana Bhraigh as seen from Beinn Dearg, 14 km one way for one hill. The highest summit is the left one, not the nice rock face to the right, which is Creag an Duine.

While the car park at Inverlael bridge was full the day before, it was now empty but for one other car in this Thursday morning. I followed the same track as for my Beinn Dearg hike until just behind Glensguaib, where I took the track to the left. I was going at a quick pace without looking at the map, and it wasn't before a while that I noticed I had missed to fork off once more to the left. The walk description had said "rising in a zigzag", and there was neither zig, nor zag. I soon reached the track's dead end and had to turn back, luckily not far, less than 1 km.

Altitude profile created with GPSTrackAnalyse.net, the first "hill" is the wrong track...

The path now indeed rose steeply with zigzag, until I passed through a gate that was difficult to open, and now was on the open hill. The weather was good, the path very clear, process good. Crossing the Allt Gleann a' Mhadaidh was not a problem. All in all, it was, well, a bit boring, but at least in beautiful surroundings and fresh air. 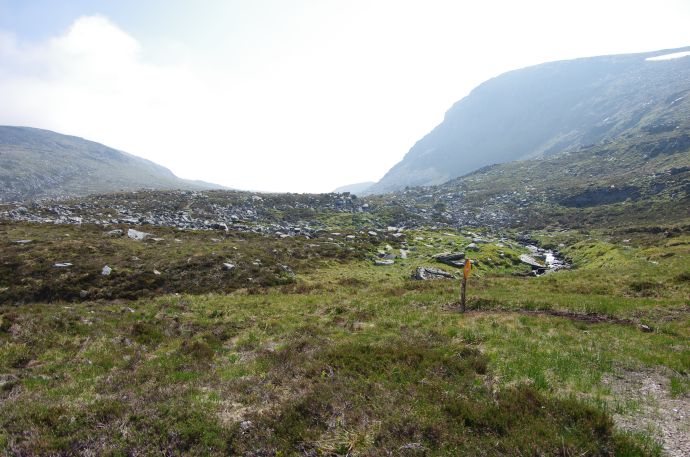 An arrow on a signpost to divert from the monotonous walk

The real fun began when I came near Meall a' Choire Ghlais. The gully leading down to the Gate of Ca'-derg was not easy to find, even with the compass, because it was never clear when the path actually had ended, so the compass bearing was only half useful. When I eventually reached the top of the gully, a couple just came up and we exchanged a few words. From here, the scenery changed and became more rugged. A wind rose, and it was not too warm anymore compared to the past days.

The gate of Ca'-derg, which sounds like a portal to another world in an old wizard's tower, is a magnificent place. The view down Cadha Dearg is stunning, so I had my second breakfast right here.

The gate of Ca'-derg is open. Click to see large.

From here, a small path rose towards Seana Bhraigh, but soon faded away. Looking back, I tried to figure out where I came from, but it is actually easier now at home on the photo: 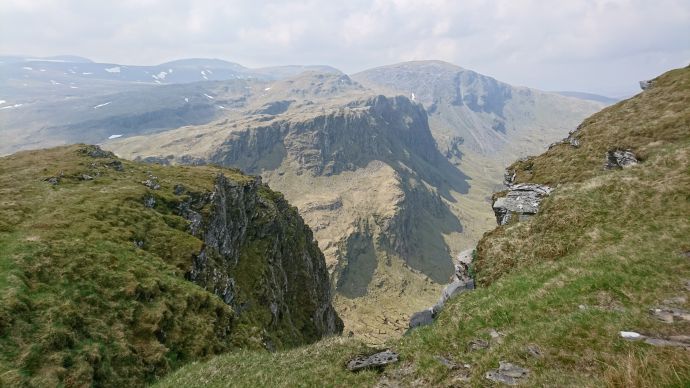 Looking back across Cadha Dearg. The summit to the right is Meall Glac an Ruighe. To its left, more to the front, is Meall a' Choire Ghlais. Following its ridge down to the left, you see a bigger patch of snow. This is the gully I went down to reach the Gate of Ca'-derg, which is hidden from view in this perspective by the knoll in the left foreground.

I went up the South-Eastern summit of Seana Bhraigh to have a look at Creag an Duine: 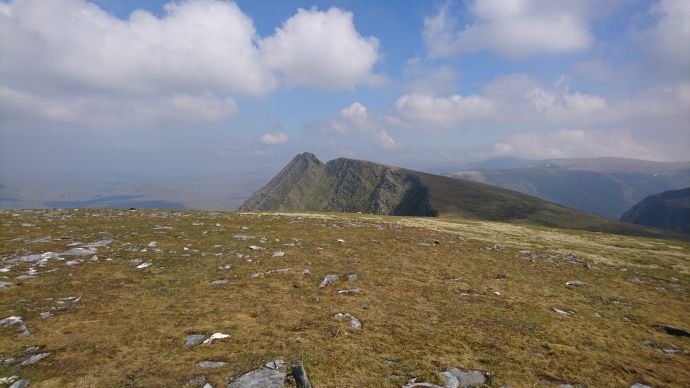 The cliff of Creag an Duine above Luchd Choire. From almost all perspectives, it looks higher than Seana Bhraigh's summit, but is 21 m lower according to the map... 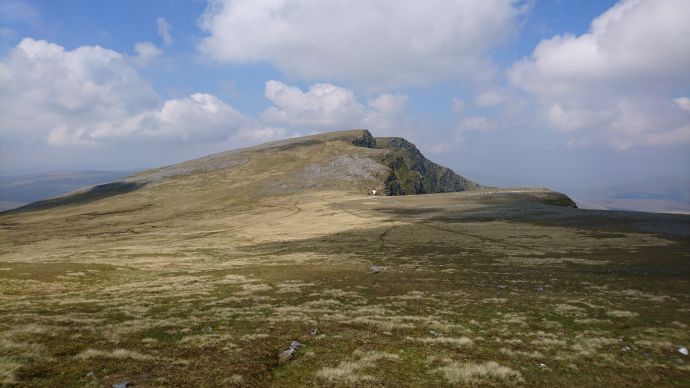 From here, just a small plateau to cross to the real summit

During my lunch on the summit, two hikers, an Englishman and a Scotsman, came up who had met on the way from the A837, also quite a long walk in. They had scrambled up Crag an Duine's north ridge, and said it was a pleasant and rather easy scramble, confirmed by the presence of the Scotsman's dog.

The views were fine from the summit, and I stayed a while.

From left to right: the lochan below Creag nan Gobhar, where the two men would go down later, Loch Luchd Coire, and the cliffs of Creag an Duine above it. Click to see large. 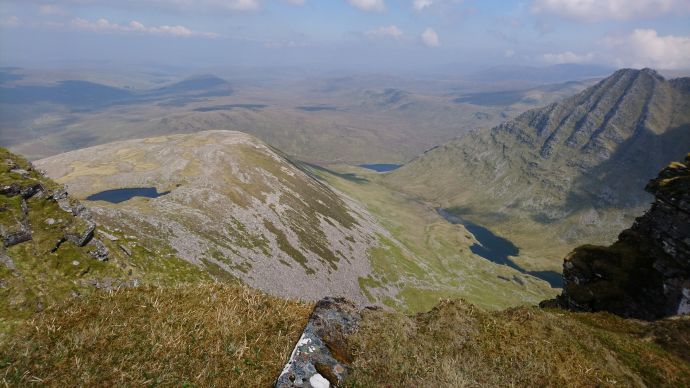 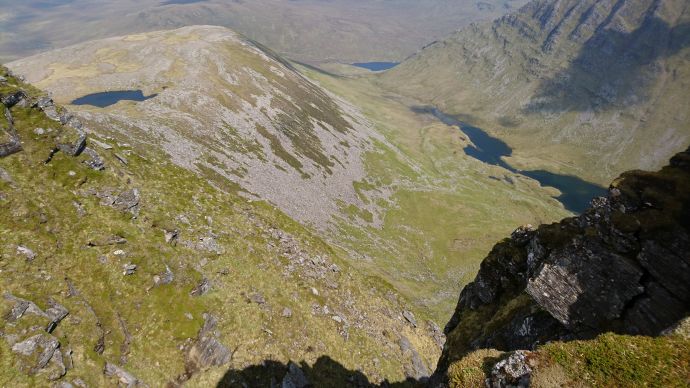 Zooming more in, one step closer to the edge

On the way back, there were a lot of insects that looked like giant moskitos - a bit like a crane fly, but with longer legs and smaller bodies. I did not know whether they would bite or sting, but the certainly tried to land on me whenever I could. The were sitting in the grass, protected from the wind, and stirred up by my boots with every step. I was glad when I was out of the grass again annd on the path. Like going out, it took me a while to find it again after having come up the gully. The way back to the car was long and eventless, but it was a really nice day out all in all.

2018-05-31 5. Wanderung_reduziert.gpx Open full screen  NB: Walkhighlands is not responsible for the accuracy of gpx files in users posts