Left Perth at 6:45am with three cars and a party of nine.
At Glencoe around 8:30, weather a bit cloudy with a little drizzle, but ok.

Imposing Buachaille was only partially visible.
This photo taken at end looking back. Buachaille at end of day

Path to base of Buachaille ok, and climb to mid summit not too steep
Hit snow line, path steepened, and snow deepened.
Soon we were climbing near vertical, although snow good and footholds help ascent.
Didn't really want to look behind me as very, very steep path to summit - if there was no snow I think it would have been much more difficult. Been told, as more snow falls this section becomes vertical and the risk of avalanche can be high. Mist at first summit and ridge walk meant photos not so good, so not added.
Good effort required to get to 2nd Munro summit as three tops to conquer first.
Got to end of ridge to Stob na Broige - as forecast, began to clear for us - great views appeared On way down - snow above our boot tops Going down from bealach

On way down, still clearing and the ridge we walked up became visible. Party of nine on way down

Looking back toward Loch Etive 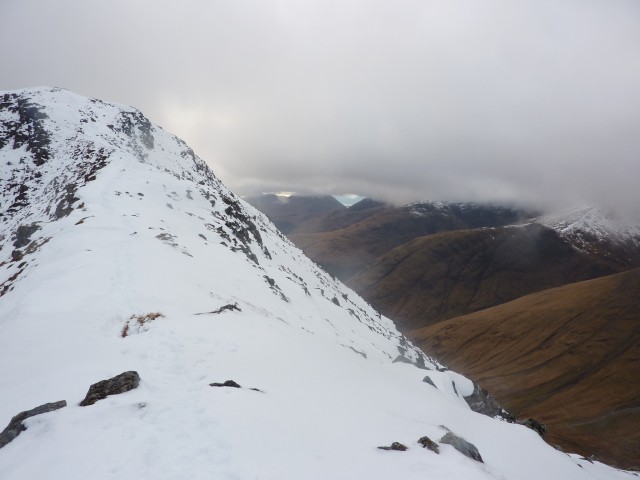 Looking back at Stob na Broige

Sliding down the snow great and making a quick descent until the snow disappeared and had to negotiate the rocks. Near base of Buachaille

Went to Clachaig for a refreshing pint.
Came out at 5:30 in pitch dark, concerned to see three headtorches in the distance descending the Aonach Eagach adjacent to the Clachaig gully still only halfway down. More worryingly, saw one solitary headtorch descending at the gully, from almost at the ridgeline - hopefully they all got down safely - wouldn't wanted to be in their shoes, even in daylight.

Loved the pictues, the scenery looks fantastic and that was some deep snow eh?

Hope those people got back ok

Snow much deeper than I thought.
Summit in cloud when we started, not much sign of snow anywhere, so left ice axe and crampons in the car!
Bad move, almost a vertical climb in snow at one point, would have felt safer with them!

Yeah, hope the people got down.
Felt a cold chill go through me as I looked up at them from the safety of the car park, also it was very, very cold, increasingly so.
Very easy to get caught out with timings in the winter.

is this the walk you mentioned doing a couple of weeks ago?

Yeah, this was the annual boys only walk, which a stayover and big night out was planned.
Accommodation problems occurred, mis-communications and then a catalogue of lies and dedceptions followed!!

I tried to not to show them in the photos - oops! Sorry J

Which route did you use to go up and down? Was it one of the ones from the sides about half-way along up into corries?

That looks like a lot of fun! I've made the mistake of leaving the ice axe and crampons in the car myself, it makes for some interesting moments on the slippery stuff to say the least.

Nice pics, does look good with snow on the hills but no way you'd get me out there in those conditions.
However, in January I'm planning on trying some solo vertical climbing with ice axes and crampons. Oh I should say it'll be at the Outdoor Show in London.

Great report and pictures pal. You must get a cracking view from here in finer weather. This is one I would love to do, just minus the thick snow though

.
Glen Coe is probably my favourite place but I've never had the chance to go up any of the Munros there. Would you recommend this one to be my first???

mountain coward wrote:Which route did you use to go up and down? Was it one of the ones from the sides about half-way along up into corries?

Yes, the recommended route in Walkhighlands.
Up the corrie - much steeper than I imagined, although that was stated in the route text.

neilfowlie wrote:Great report and pictures pal. You must get a cracking view from here in finer weather. This is one I would love to do, just minus the thick snow though

.
Glen Coe is probably my favourite place but I've never had the chance to go up any of the Munros there. Would you recommend this one to be my first???

There are many great walks in Glencoe - this one not my favourites, as the steepness of the final ascent is quite risky, especially for me. Lovely iconic mountain though. I liked Beinn a Bheithir better.