During our July holidays we had once discovered, that following the hill guide is not always the best solution, especially when it comes to less frequented routes. Now it's time for part two under the same title, but this time the story is about one of more popular Munros, Beinn Chabhair. The vast majority of walkers pick the shortest approach from Inverarnarn and end up fighting the bogs on the way up.

We considered some sort of Chabhair-An Caisteal combination, but in the end we decided to join the crowds up the most popular route.
It wasn't as wet as many of you have experienced in past years and that due to the very dry summer. Most bogs dried out, but not all of it, sadly, especially higher up the slopes. Plus we walked this route after a rainy night, which didn't help. Generally, no matter what conditions and current weather, Beinn Chabhair should be always classified as a bogfeast to some extent. Take your gaiters and check your waterproof boots before this walk!
Our route followed the WH waypoints on the way up. On the way down, we discovered a newly bulldozed track, dry and easy to follow, which took us back down to the glen without having to fight the bogs again. So in case of Beinn Chabhair, it's not worth following the guide. If you want to save yourselves some quagmire, take our descent route, even though itt's slightly longer.

Track_BEINN CHABHAIR 21-07-18.gpx Open full screen  NB: Walkhighlands is not responsible for the accuracy of gpx files in users posts
We parked by the hotel. It was a busy day (Saturday) and the car park was near full: From the hotel, a good footpath follows the A82 for a short distance: Past the Beinglas campsite (also very busy) we found the start of a well-worn path heading uphill through the thick vegetation. It was eroded to the extent of being very unstable in places. I hated the experience. We agreed that we'd try to find an alternative route of descent, going down this eroded slope would be no fun! We took a short break by the waterfall, not much water in it... 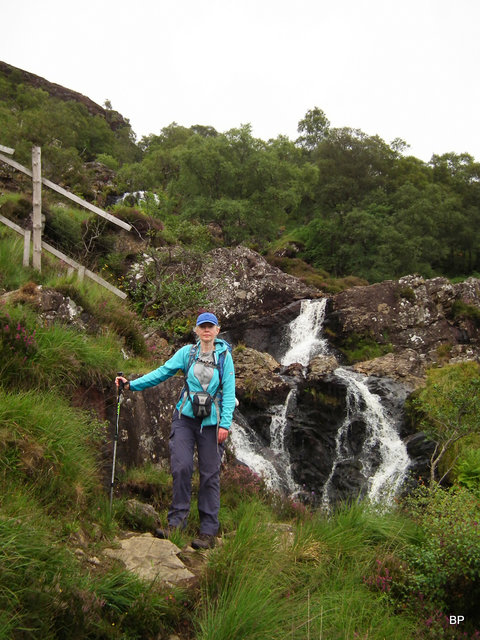 Another 50 or 100m of ascent up the slimy bogfeast, we encountered a stile: Ahhh, I forgot to add that the day was cloudy with passing drizzle... Not a good one for taking spectacular photos and to be honest, this is not the area of outstanding beauty... Higher up, the path is marginally drier and we managed to avoid most of the mud as we followed the path along Ben Glas Burn... At some point, we crossed a newly made track and we noticed a small hydro dam nearby. Kevin said, this track must be a good alternative descent, we'll explore it on the way down. He didn't fancy the mud-sliding on the path above Beinglas either!
The clag was still down to 500-600m so when we reached Lochan Beinn Chabhair, we could see hardly anything at all. A few different branches of the main path go up the slopes of Meall nan Tarmachan. Kevin, of course, must have picked the wettest one In good weather, the final walk along the ridge to the summit must be spectacular, but as we could see no views, we concentrated on staying on the right path The path is very good, once on the ridge. It will take you straight to the summit: 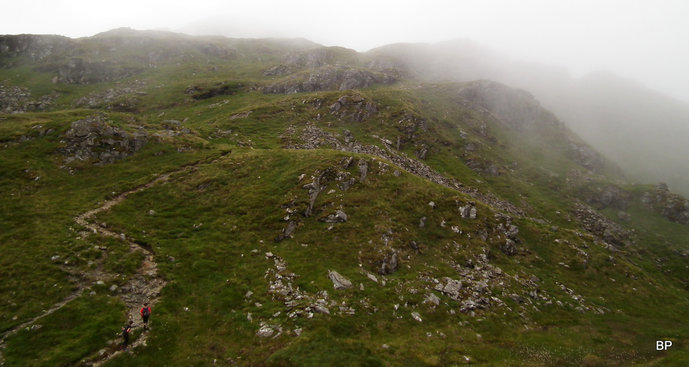 Despite the bog and the cloudy conditions, I was still in good mood. Munro no. 243 (87 for wee Lucy): 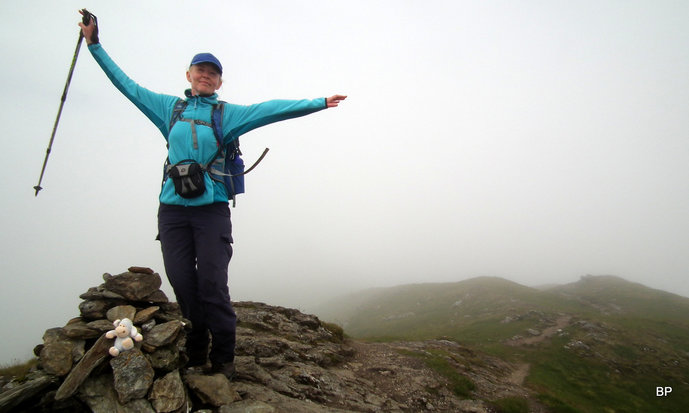 We spent some time on the top, sipping tea and waiting for the clag to lift. At some point it looked like it would, but in the end it didn't.

Time to go... Follow the path back down the ridge!

The clag did lift a bit as we descended and we could see some views from lower down the slopes, but the summit never cleared.
View from Meall nan Tarmachan to Loch an Chaisteil: Panorama south, or what we could see of it:

Posing with the imposing rocks: Lochan Beinn Chabhair from above: Panther walking around with her camera, trying to make the best out of a cloudy day...

I liked this hill. It has more character in the upper half, big rocks and steep walls. Yes, the bottom half is a boggy nightmare, but it's another Munro added to the tally! Looking back at Beinn Chabhair:

Once past the lochan, we aimed for the hydro dam: 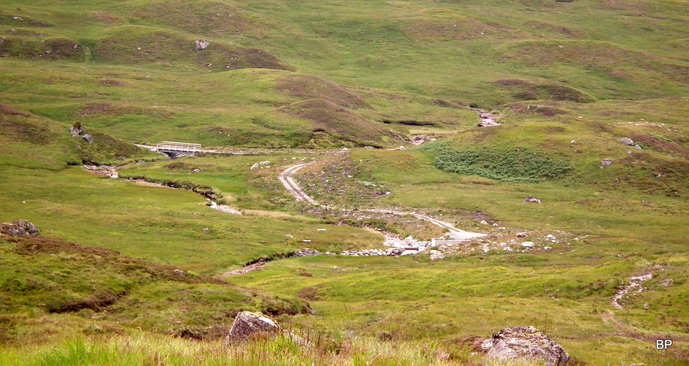 The dam and Benn Chabhair: From the dam, it was a piece of cake walking, just following the track:

The track zigzags down the northern slopes to join the WHW, which can then be followed back to Beinglas. The detour adds roughly 2.5km to the distance bit in my opinion, it is worth going that way, it avoids some of the worst bog and the very eroded path just above the campsite.
Looking back at the initial steep section of the ascent: Not the most inspiring of Munros, but we enjoyed it - to some extent. Might be a good one for winter when the bogs are frozen, but sadly it is too far to drive for us to repeat it in winter conditions.
..................
My next story will be from Panther's home territory