A Sail in the clouds: North Cluanie Four

A Sail in the clouds: North Cluanie Four


“North Cluanie Four, not Five?” I hear you cry. “What have those choirboys been up to now?

”
There is of course an explanation. On one of our Bearsden Choirboys' outings earlier this year, three of us stayed at the remote Alltbeithe Youth Hostel in Glen Affric with a grand plan to try to do the classic horseshoe of these Munros from the north, taking in all five peaks: Mullach Fraoch-Choire, then A'Chralaig, Sgurr nan Conbhairean, out-and-back to Carn Ghluasaid and then back north to Allbeithe via Sail Chaorainn. Well, that was the plan anyway

- needless to say it proved a tad over-ambitious given the atrocious weather that we got, and after a complete soaking on the way up to Mullach FC, we were forced to bail out with only one out of the five Munros bagged

...
So, needless to say, a Cunning Plan was devised (by Tom, I think). We would come back up to Glen Shiel the first weekend in August with two cars, with the aim being to do two linear walks: the Five Sisters on Day 1, and then a slightly unconventional four-bagger on Day 2, starting with the three Munros of the Sgurr nan Conbhairean group, but then heading west over Drochaid an Tuill Easaich to bag that Awkward Customer, A'Chralaig.

our_route.gpx Open full screen  NB: Walkhighlands is not responsible for the accuracy of gpx files in users posts
The weather was "mixed" to put it politely, but better than the initial forecast, and infinitely better than the weather we'd had in Glen Affric back in late May

! Although we predictably spent most of the day in the clouds, we did get some decent views at the very end, on descent from A' Chralaig, when the Clag finally took pity on us and started to lift

.
We got a reasonably early start on the Sunday morning, left my car at the end of the route at the bottom of An Caorann Mor, and took Tom's car east to the start of the route at Lundie. (I think we actually started one car park further west than the website route description

, but it didn't really make too much odds.) The start of the route, on a track up to a radio mast then an excellent ongoing stalkers' path, made for almost embarrassingly easy height gain: quite a relief after a hard day tackling the Sisterhood on the Saturday

!
There was even a signpost for the first Munro at the start of the route; something that I always find very reassuring, given my sometimes unreliable navigational skills A pleasing vista back down over Loch Cluanie: Tom stopping to check that very nifty GPS-mapping widget that he has on his phone: Another nice view over the west end of Loch Cluanie, and Creag a' Mhaim (the easternmost of the seven South Shiel Ridge Munros) with its head firmly in the cloud: The stalkers' path makes a gentle zigzagging ascent up north, making remarkably light work of a steeper section up onto an initial rocky lump known as An Cruachan, after which the gradient starts to ease off. Looking on up the path, however, it was clear that we'd soon be buried in the Clag Malcolm emerging onto the flatter bit of ridge at An Cruachan, with a nice hazy view of Loch Cluanie behind him: From here, it seemed like no time before we were up at the first Munro of the day, Carn Ghluasaid. It isn't much of a Munro to be honest; Sir Hugh was obviously feeling generous that day, but who's complaining

! In better weather, it must at least have dramatic views out north and east over the precipitous cliffs that rim a series of eastern corries ... today, however, although there was a definite impression of a steep drop-off, there was no view to speak of Looking northwards into the Clag from Ghluasaid's cairn, towards Munro Number Two: From here on, the path became a bit intermittent on the high, bouldery and relatively flat plateau, but we just followed our noses northwards. After a slightly steeper final section, we found ourselves (with remarkably little fuss) up at Sgurr nan Conbhairean's sizeable cairn. Here's Malcolm and myself, looking rather chuffed to have gotten the first two "ticks" with minimal effort ... (but A' Chralaig would wipe those smiles off our faces soon enough The third Munro of this group, Sail Chaorainn, is one of those slightly awkward outliers - it is situated quite a bit north on a side ridge, and including it in today's route was going to involve a bit of an out-and-back detour. Heading off northwards into thick Clag to get it bagged in a steady drizzle reminded me a bit of Mullach nan Deiragain, that truly remote Munro stuck out on a long ridge north of Sgurr nan Ceathreamhnain in Glen Affric, which we'd gotten done in truly miserable weather earlier this year ... Thankfully, however, Sail Chaorainn didn''t prove anything like as difficult as MnD, although its surprisingly small cairn still looked a fairly bleak spot on a day like this. The next section was a bit of a slog to be honest, involving traipsing a way back south through worsening wind and rain to re-ascend almost all the way up Conbhairean, and then raversing round to the south-west towards Drochaid an Tuill Easaich, a Top of Conbhairean which, as its name would suggest ("Drochaid" = "Bridge"), acts as the bridge to A' Chralaig over to the west.
Tom got this shot of me trailing a bit on the Conbhairean re-ascent, and looking a bit drookit: The next section, over Drochaid an Tuill Easaich, was much more pleasant, with some pleasingly rocky and narrow sections of ridge (although the path avoided all difficulties). Unfortunately, however, this was our worst weather of the day, and none of us managed to get any decent photos

. With the weather turning quite nasty, we found a sheltered spot at some boulders on the northern side of the Drochaid's west ridge, and stopped for some lunch.
By the time we got going again, the rain had thankfully eased a lot, and things were getting more straightforward. However, the descent to the bealach with A' Chralaig (known as Bealach Coire a' Chait) was a wee bit navigationally tricky, on pathless and confusingly hummocky slopes. Tom's phone widget came in handy again

!
Down at the Bealach Coire a' Chait at last, with Tom already starting up the far side: I found the re-ascent of A' Chralaig from the rather low bealach a real slog, particularly this late in the day. In fact, I think we all found A' Chralaig quite a tough customer. Like most walkers I suspect, I can't resist assigning "personalities" to individual Munros, and while the Conbhairean group are all rather friendly and unassuming characters, A' Chralaig is a right Grumpy Old Git, to put it politely

. There is really no easy way up it: the standard approach from the southern end of An Caorann Mor is by all accounts a horrible steep slog up unrelenting grassy slopes; and the northern approach via Mullach FC had completely defeated us earlier this year - admittedly because Rain Stopped Play, but even so, that left us all with the strong impression that this was one hill that really didn't want to be climbed

!
Another hazy view down over Loch Cluanie, by way of distraction from the physical effort: A marker cairn masquerading as Nessie further up Finally, after what really felt like rather a long time, we did find ourselves up at A' Chralaig's colossal summit cairn. To my surprise, it turns out that A' Chralaig is in fact the highest summit in Glen Shiel at 1120 metres, being slightly higher than various more feted peaks such as The Saddle, the Sisters, the South Shiel Ridge et cetera et cetera et cetera. We were all very relieved to get it bagged 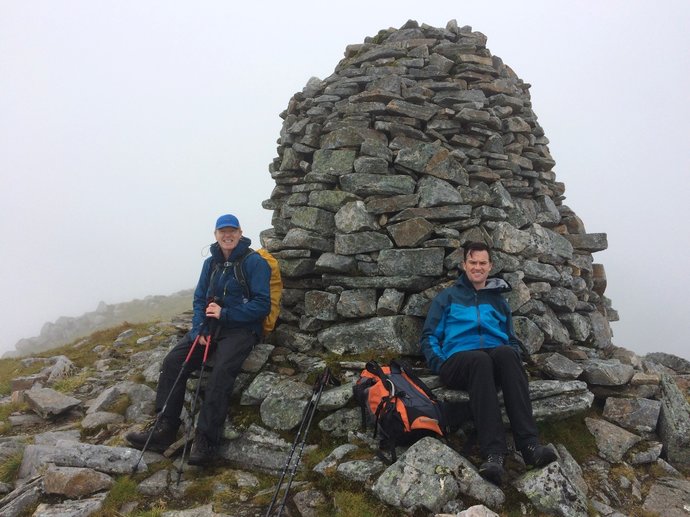 At least it can be said in A' Chralaig's favour that it knew when it was beaten ... as we started the descent, it took pity on us and slowly lifted its head from the Clag, giving us by far our best views of the day.
A grand view of its shapely south ridge on descent, with hazy Loch Cluanie in the distance: Looking westwards, with the Ciste Dubh ridge very impressive in the foreground, and with those famous Five Sorority Girls in the distance: The west end of Loch Cluanie, and the start of the South Shiel Ridge: An interesting view back north-east to the Bealach Coire a' Chait and the connecting ridge to Drochaid an Tuill Easaich: Sail Chaorainn was also looking unexpectedly impressive further to the north. A bit further down again, and the whole South Shiel Ridge was now completely Clag-free. Ah, so that's what it looks like 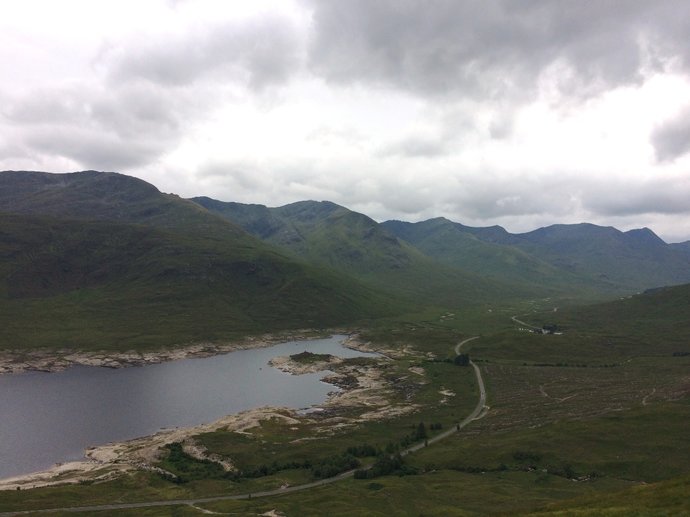 A last look westwards, towards Am Bathach, Ciste Dubh and the start of the Brothers ridge: Although the steep and muddy path down from A' Chralaig to the track at the south end of An Caorann Mor must be truly horrible on ascent, it proved surprisingly straightforward on descent, and it wasn't long before we were back down at the car park, and making our way back east to the Invergarry Hotel and tasty fish & chips for three

.
A road closure on the A82 proved to be a complete pain on the way home to Glasgow, and we all got back home rather late

... All the same, this proved to be a surprisingly enjoyable day despite the slightly iffy weather, and at least that's A' Chralaig finally defeated