I'm not long back from a fortnight's holiday in Malta (as you do), and catching up on some WRs from earlier in the year. This was Day Three of an outing in late July, based at the Saddle Mountain Hostel in Invergarry to do some mopping-up of Section 9 and Section 10 Munros. After a moderately strenuous outing the day before doing the two Lochy Lochy Munros plus the adjacent Corbett Ben Tee, I was looking for something shorter and easier for the third day, and Gairich seemed to fit the bill.
I'd already had a good look at this hill on a backpacking outing up Lonely Glen Kingie last year to bag Sgurr Mor. On that occasion, my abiding memory is of a complete bogfest of a path round the southeast corner of Loch Quoich, when I got back to the car looking like Swamp Thing .... However, this time I'd be attempting it after one of the West of Scotland's most prolonged dry spells in living memory

, so maybe that would help a bit!
There is really only one sensible route up Gairich (at least for the non-kayakers amongst us), namely to park at the Loch Quoich dam, then cross it to head southwards towards the eastern end of the Druim na Geid Salaich ridge, then head westwards up that to the Munro summit, exactly as per the website's route description. So that's what I did.

our_route.gpx Open full screen  NB: Walkhighlands is not responsible for the accuracy of gpx files in users posts
The forecast for the day was very promising, and there was a fine view of Gairich from the car park: The Loch Quoich dam looks pleasingly munumental from this angle I headed off through the (thankfully unlocked) gate that led across the dam. Halfway across, I got a nice zoomed shot of the attractively conical Ben Tee off to the east, one of the three hills I'd climbed the previous day: At the other end of the dam, the potential bogfest-of-a-path starts ... however, to my considerable relief, it did indeed prove to be much drier than it normally is, and with careful footwork I managed to end the day with dry feet, amazingly enough

- quite a rare achievement for Gairich, by all accounts!
A view back to the dam from a bit further south, with Spidean Mialach looming up to the north on the other side of the road: The path undulated southwards over some boggy and hummocky terrain, to eventually descend again towards the forestry north of Glen Kingie, and the eastern end of the Druim na Geid Salaich ridge. Looking up the Druim na Geid Salaich from the corner of the forestry, with Gairich raising its head in the distance: There proved to be an excellent stalkers' path up the first bit of the ridge, which made for fairly straightforward progress.
Up on the Druim now, with Gairich not looking quite so far away: A bit further up, the path became rather intermittent amidst some peat-haggery. This wasn't really a problem on the way up, since Gairich itself made a very obvious navigational target, but it proved a bit trickier on the way back down, when I temporarily found myself a tad off-piste amongst those entertaining peat hags

! Thankfully, Smaug wasn't in residence, however. 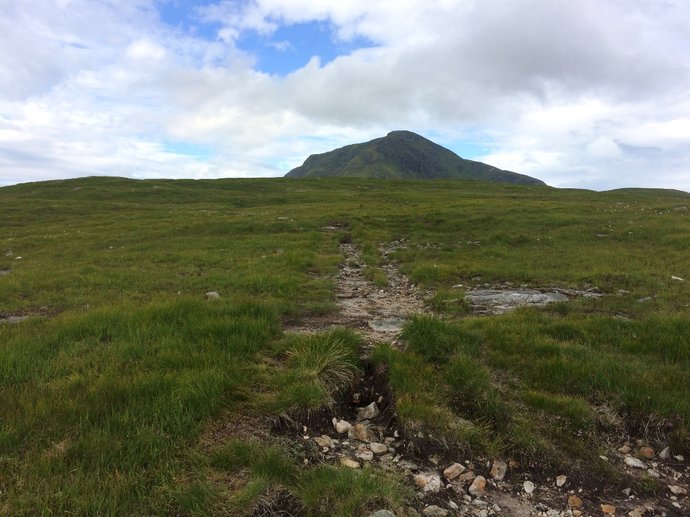 Eventually I reached the foot of Gairich itself, picking up the path again en route to make a steeper zigzagging ascent up the Munro's western flanks. There was a fine view southwards across Glen Kingie to the Corbett Sgurr Mhurlagain, with its impressive big northeastern corrie and unusual double east ridge Slightly higher up, there was an entertaining Wee Scrambly Bit up a short rock wall with good holds: actually easier than it looks from below. It wasn't that much further up to the summit plateau. The clouds had mostly cleared on the way up, and as might be expected for such an isolated Munro peak out in the Wild West, Gairich proved to have very impressive summit views.
Looking west towards Sgurr Mor, with pointy Sgurr na Ciche just visible in the distance over its right shoulder: Northwest towards Loch Quoich and distant Knoydart, with Sgurr a' Mhaoraich on the far right: The northern arm of Loch Quoich and Sgurr a' Mhaoraich again: A zoomed shot of Sgurr an Fhuarain, Sgurr Mor and distant Sgurr na Ciche. Quite a relief to realise that I'd already bagged these ones! Sgurr an Fhuarain and Sgurr Mor again, with the west end of Loch Quoich and the Knoydart peaks visible in the distance: ...And looking south again across Glen Kingie to that interesting double east ridge of Sgurr Mhurlagain:

I paused to pass the time of day with another chap who had appeared up while I was taking the photos, then had a bite of lunch before heading back down again the way I'd come.
A great wee outing, and thankfully not the complete snorkel-and-flippers job that I'd feared

Re: Gairich, and with dry feet!

This sure is a great hill for superb views.

My pic of the 3 Corbetts is almost identical to yours - a really wonderful place.