Yesterday we climbed Beinn Dearg in pretty rotten weather and found a nice sheltered camping place at the side of Loch Prille just where the burn flows into the loch. The rain had stopped about 1am and although there was noticeably less water in the many waterfalls around us, there was still a lot!
The original plan had been to climb Am Faochagach from here, to return to the outflow of Loch Prille, ford the river at this point and go up the eastern ridge of Cona' Mheall and onward to Ceapreachain, Eididh nan Clach Geala and onward towards Seana Braigh.
But there had been a lot of rain and the burns were very full. Also the cloud was down. The wind seemed to have dropped. We decided to find a weather forecast as soon as we could and make our final decision after climbing Am Faochagach.

The first task was to cross the burn - there was a lot of water in it but it is relatively flat and broad where it flows into the loch so we managed to cross here. Rudolph got wet feet, but that's because he had a big hole in his boot (which was put in the bin when we got home!) After the first section which was a bit rough across the moraines, we came up onto the moor where it was lovely going underfoot on springy short turf. We soon reached Meallan Ban and thence to the summit of Am Faochagach. Sadly by the time we got to the top, the summit was in cloud having been clear when we had set off. Never mind, there was phone signal and we got an up to date weather forecast, which indicated that the weather was going to improve. Looking across the burn to our tent with Meallan Ban in the background, Am Faochagach behind not visible Looking back to the burn flowing into Loch Prille, cloud come down a bit. looking for a signal on the top

We decided perhaps that it would NOT be a good idea to cross the outflow of Loch Prille with this amount of water - if we slipped or fell we didn't fancy going off a 100m cliff - at least if we fell crossing the inflow we would be on the flat!

We set off on a bearing from the summit - for a moment, until we made a basic error of following the fall line without checking the bearing as you can see from the gpx trace. Fortunately we realised our error soon enough and were soon back to Meallan Ban and then out of the cloud and back to our tent.
We stopped for a wee snack here, it was about 12 o'clock at this time, packed up the tent which was now dry, and set off again.
We decided not to go up the East ridge of Cona'Mheall after all. We could see from the map that it got quite steep at the top, we had seen it described as a scramble and we could see some rather nice boiler-plate slabs on the side of the hill. So we chickened out as it was all in cloud. We decided to head up the glen up by Loch Coire Tuath and thence to the 813m bealach to the west of Cona'Mheall to pick up the usual route. 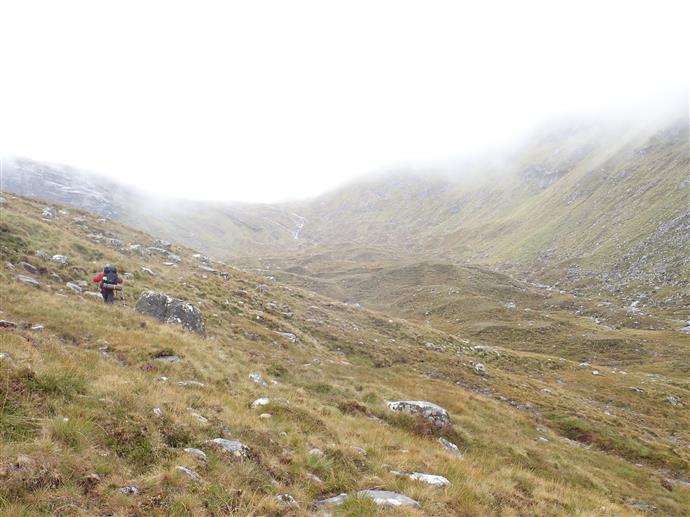 This proved to be very rough going through boulders and heather, which was extremely tiring. However as we climbed, so did the cloud, and when we came to a lovely burn with a nice flat area we stopped for proper lunch and a brew. happy mugs looking down to Loch Tuath with a view!

Now I don't know exactly why this happens but I think that it is a combination of tiredness and not being fit - I go for these long rough expeditions with very little in between - but I found myself today again unable to eat and feeling quite nauseous. I managed to get a hard boiled egg and some oatcakes inside me and after a rest felt somewhat better and ready to tackle Cona' Mheall. setting off up Cona' Mheall

As we climbed we could see someone ahead of us. We reached the edge of the cliff and suddenly there was a view over to Am Faochagach and some lovely waterfalls including a white torrent coming out of Loch Prille and we were glad we had not tried to cross there. a wee hint of coire Granda oh my! suddenly a view to Am Faochagach and its cliffsabove Coire Lair and Loch na Still zoomed to the waterfall oh my!

The man we had seen ahead of us was still on the summit - he was on his penultimate Munro and planning to Compleat on Carn Mor Dearg later in the year. We leapfrogged each other (not literally mind) all the way to Eididh nan Clach Geala. 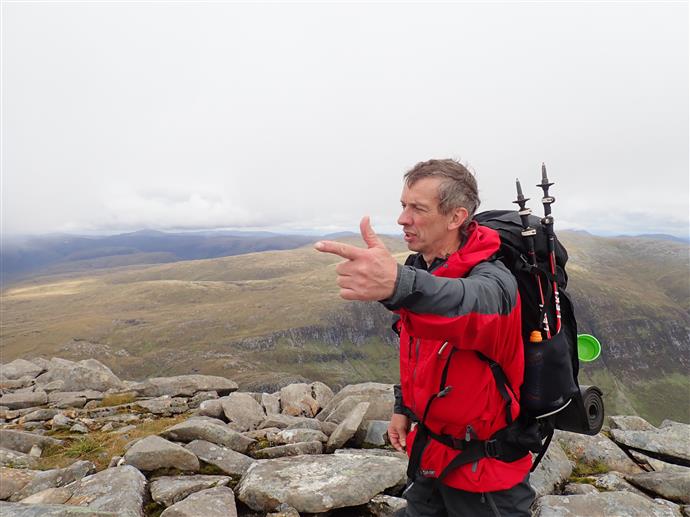 Rudolph explaining something to the man on the top of Cona' Mheall, my how your hand has grown! 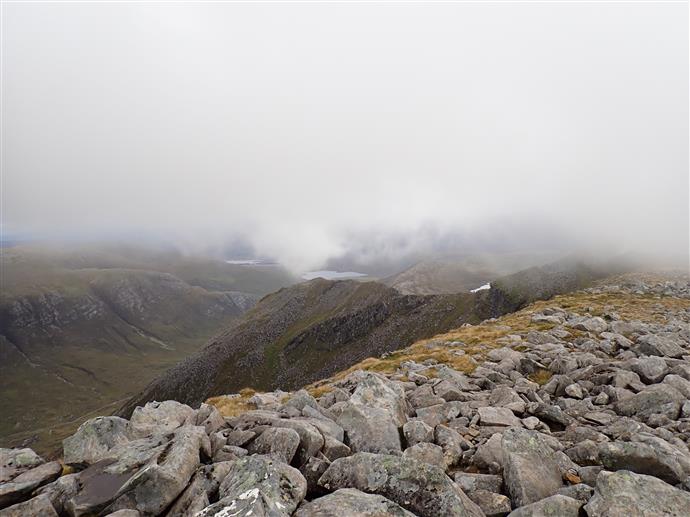 I think this counts as a cloud free munro - Loch Glascarnoch in the distance?

Back to the bealach from which the path continues around the south side of the 884 summit at the top of Coire Granda with tantalising glimpses through the cloud of lochs and cliffs, eventually coming to the end of the Famine Wall which was a welcome sight. We've been here before and again had to walk on a bearing to find the way up Meall nan Ceapraichean where at first there did not seem to be a path but we found one eventually. Famine wall, and back into the cloud NO. 3 for the day, Meall nan Ceapraichean 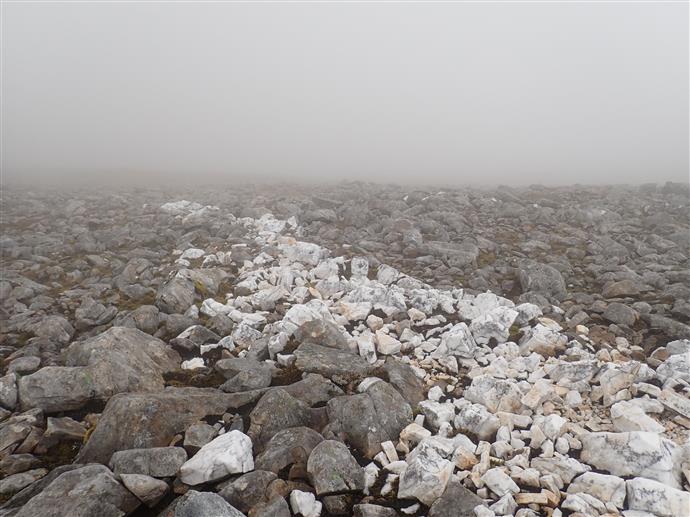 Coming off Ceapraichean was interesting. We walked on a bearing for a while to the flat area east of Ceann Garbh then set off towards the bealach again on a bearing. We came to the top of a cliff where we could go no further, so tried a bit further right and were pleased to find a path which was slippy but brought us safely down. That was a really interesting bealach with lots of lumpy rocks and lochans. Once over the bealach we were glad to be on our last climb of the day up to Eididh nan Clach Geala where we were delighted to have some views!!! fantastic. 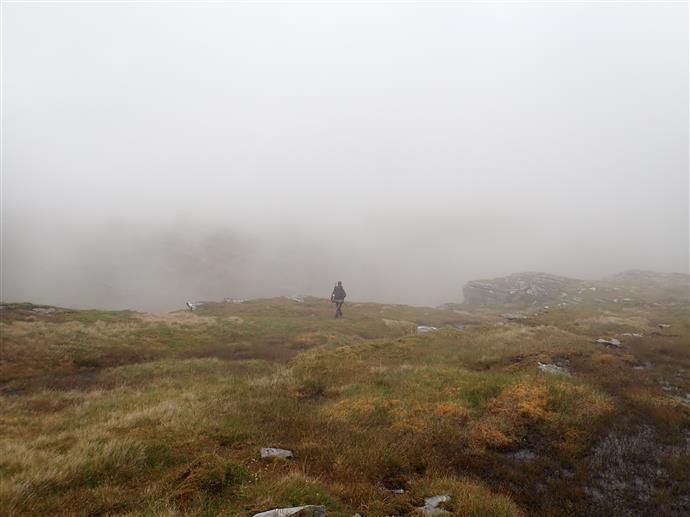 Hm, where to now? 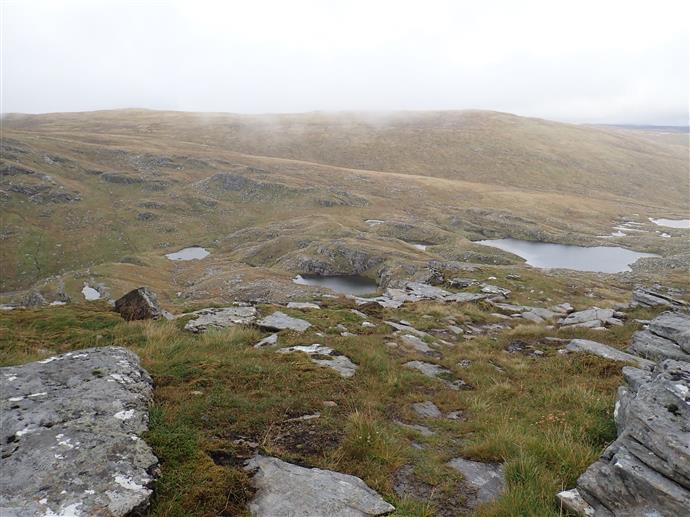 Oh good, a path showing us the way to this complicated bealach 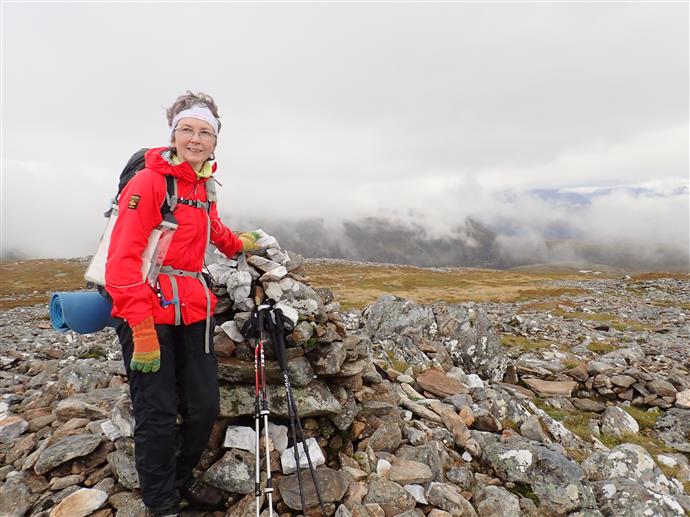 So now just to find a place to stop for the night. The forecast had told us that the wind was going to freshen overnight to a strong Southerly so we wanted to find something a bit sheltered from this direction. We also wanted to get to a good place from which to tackle Seana Braigh in the morning. This meant crossing the moor and getting to the little notch between Meall a choire Ghlais and the pt 778 just to the south east of it. 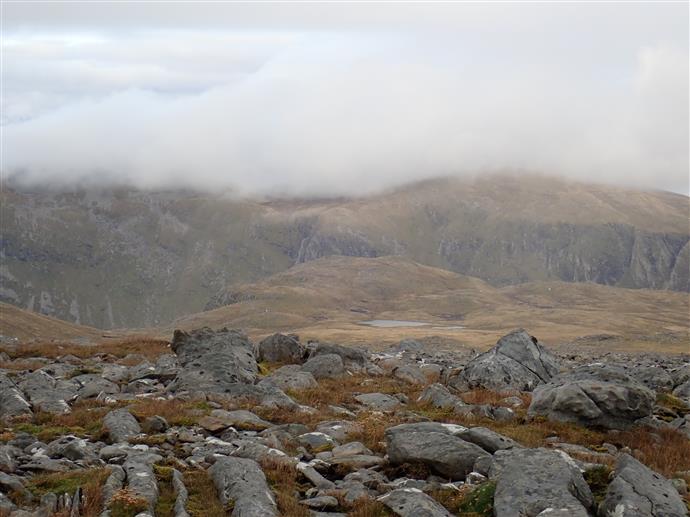 We head for that lochan, then through a little notch on the horizon just beyond. Seana Braigh tomorrow's target behind.

We found a little flat area perched on the side of the hill with a grand view over towards Seana Braigh. 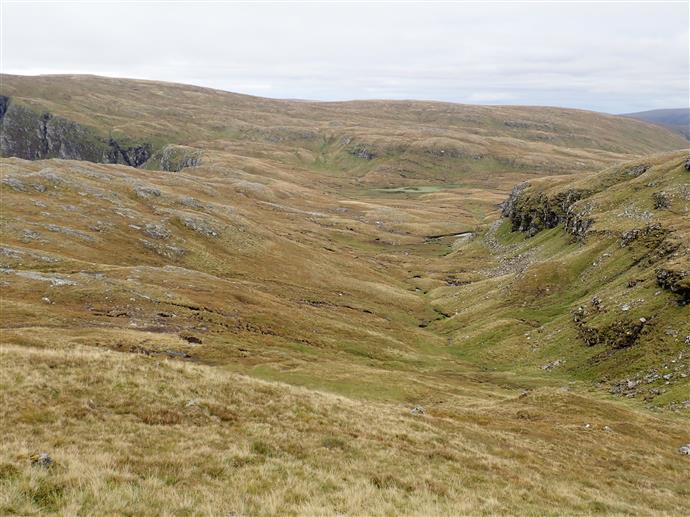 Looking down towards Loch a' Chadha Dheirg from our camping place our tent perched on its ledge. My feet on the left.

It was a lovely evening apart from the midges and after walking for 18.5km and 1300m odds of ascent, over nearly 11 hours it would not be an exaggeration to say we were tired. (knackered even maybe). We had our tea without any pudding and went to bed.


Deargs day 2.gpx Open full screen  NB: Walkhighlands is not responsible for the accuracy of gpx files in users posts

Nice to see this lot - they look pretty good. I planned several routes 4 or 5 years ago when I first started in the Highlands, but have not yet got around to doing any of them.

Glad you got some decent weather after the previous day...

BTW I meant to ask in my response to Part 1: were you wet within your waterproofs due to exertion? Both my brother and I have fully waterproof (we've tested them) and "breathable" gear, but we find when it's raining hard that we invariably get very wet anyway if we're doing anything energetic. So far I've done a fair bit of reading, but not found any detail of a way around this (which anyway, for reasons of the physics, I wouldn't expect anyway.... .... unless, as Andy Kirkpatrick - tongue in cheek - suggests, I use an umbrella

Thanks for that. I think I'd happily go back here but would want a better day next time!
We are Paramo converts and both jackets and trousers are Paramo. They do keep us dry, sometimes a bit of water gets in round rucksack straps or at wrists, but it soon goes out again. They are not waterproof if you sit down or kneel in a bog in the same way that "traditional" waterproofs are though. We carry a small piece of closed cell foam mat (just chop up a cheap sleeping mat) for situpon purposes which is warm on wet grass or rock. But if you do get a damp area from sitting down it dries up as soon as you get moving again.
You still get sweaty from exertion but I don't notice being sopping wet like I did in my previous waterproofs.
We did our ML training in Wales and we were the only ones who came home dry after some foul weather March days.
Some people complain paramo is too warm - I dont, but I do feel the cold myself. I was wearing a merino baselayer and sometimes a lightweight grid-type fleece, I have a smashing Berghaus one which I got for £14 in their outlet shop at Dalton Park (near Sunderland). the gloves are home knitted and felted in my washing machine. They stay warm when wet but take an age to dry so a bit unpleasant to put on in the morning! But I can do zips, make tea etc without taking them off. I have a big pair of overmitts if it is really horrible.