I went wild camping in Skye for 5 days for my good friend's birthday. We camped in Glenbrittle the first night and then moved to a beautiful patch next to the beach about a 10 minute drive from Broadford. We had originally planned to tackle Sgurr nan Gillean on the Friday but due to a flat tyre we were delayed and decided it would be best to wait until the following day. This proved to work in our favour as the weather was much better on the Saturday and dry all day! Some of the photos in this post were taken by my friend who is a far superior photographer to me.


We all set off to the car park much later than planned...to say we were all a bit worse for wear would be a major understatement. Hungover and sleep deprived does not even begin to describe it! All set for the off despite fragile dispositions

Nevertheless, we set off in good spirits for the long, scenic walk through the moorland. It wasn't long before we started gaining height and following the path up through craggy rocks. We were all feeling very positive...until we reached a dead end. We had reached a steep drop down into some scree which then followed a river down into a deep gorge that stretched for miles back the way we had come. We could see some hikers much higher up on the opposite side. We were all extremely dismayed and unsure of what to do. The drop down looked too sketchy for us to navigate and we would have to walk a long, long way back the way we had come to cross the gorge. It was getting late in the day and we were wondering if we might need to call it quits and return to the campsite. One of my friends, who is a fairly experienced hill walker and climber, went on ahead up the steep slopes over a large lip of rock. He managed to pick out a safer route higher up the slope and down through the scree. We all set off after him and took our time as we climbed over a huge expanse of boulders until we made it down to the river. Once here, we managed to climb the steep slope up to the path where we had seen the other hikers. Hurray! Our spirits were lifted once again and we set off on the correct path this time. Shortly before realising we were on the wrong side of the hill... Looking menacing in the distance


We soon reached the huge, steep slope of scree that made it's way up to the ridge. We saw some other walkers making their way down kitted out in hard hats. This was mildly alarming and made us all wonder if we should be wearing hats?! It was hard going up this slope and one of my friends managed to get stuck which required a rescue mission. The ground underfoot was so loose it felt like walking through quicksand at some points. We finally made it up onto the ridge and were all blown away by the views we were rewarded with down the other side of the ridge. Breathtaking doesn't even begin to do them justice. We stopped for a breather and to soak in the views. I scranned down my Dream Ring in celebration - a Highland speciality from a bakers called Harry Gows which I have missed sorely since moving to Glasgow. Pleased as punch on the ridge We then begun the scramble up to Sgurr nan Gillean. Half the group stayed behind on the ridge as did not fancy the rather perilous looking climb. We made our way up very slowly and picked a sensible route up. It was a bit scary but mostly exhilarating and fun. After a while we were almost at the summit and I had reached a large gap/drop which led onto a big stone slab further down. I had no idea how I was supposed to cross this other than leaping blindly across which did not seem wise with steep drops down each side. I had a feeling we had not taken the correct route and should be lower down and climbing up, rather than leaping from above. I sat for a while trying to figure it out but the rain appeared and I could not think of any safe way of navigating it. I did not want to turn back as we were tantalisingly close to the summit, mere metres away, but knew it would be really stupid to attempt it with my lack of experience and the potentially slippery rocks. So we scrambled and crawled back the way we came until we reached the ridge once again. We were all very proud of ourselves for getting as far as we did considering our fragile dispositions and several in the group had never climbed a munro before. What a cracker to start with! We begun the long, steep descent back down and it was a relief to reach flatter ground after all that slipping and slithering on the tiring scree.

We arrived back at the pub in Sligachan and enjoyed a big hot dinner, a pint and a ceilidh band before heading back to the campsite. It was a rollercoaster of emotions and honestly felt like a spiritual journey with so many obstacles and problems along the way. It's amazing how tiny such a powerful, ancient, unpredictable mountain can make you feel. Insignificant in comparison. I have so much respect. 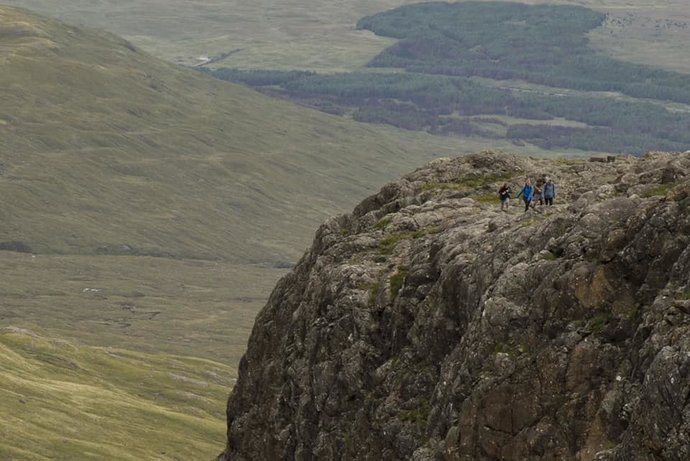 Re: Peaks and troughs on Sgurr nan Gillean

Sounds as though you had a great day out, summit or no summit. Skye's great, isn't it