This is an old story... One of my first serious climbs over two years ago. Beinn Alligin is my husband's favourite mountain and no wonder he did it countless times. I think I'm a bit jealous

For me it can only be second favourite after Ben Eighe. Back in October 2008, when I was only a beginner, any Torridon mountain would present a real challenge... Still I didn't expect to see the Brocken Spectre!
Scared or not, I had no choice but to grab my rucksack and follow Kevin up the slope...

We started the usual way, through Coire nan Laogh. The views down towards Loch Torridon and Liathach were spectacular already, and it was only the beginning... The first encounter with Beinn Alligin ), it took us quite a while to finally reach Tom na Gruagaich. Patches of snow covered the top of the ridge. For the first time I saw the beautiful panorama of Torridon in its full splendour. Wow! I was delighted and still - it wasn't all... Looking down the steep slope... Where's my vertigo?

From Tom na Gruagaich we walked along the ridge to Sgurr Mhor, stopping for a break by Eag Dubh. 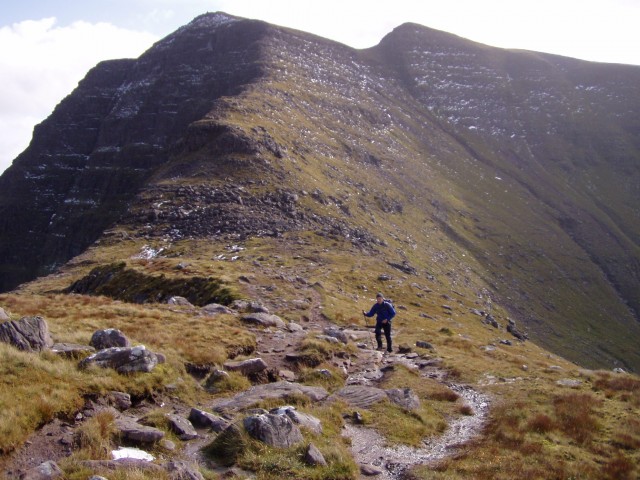 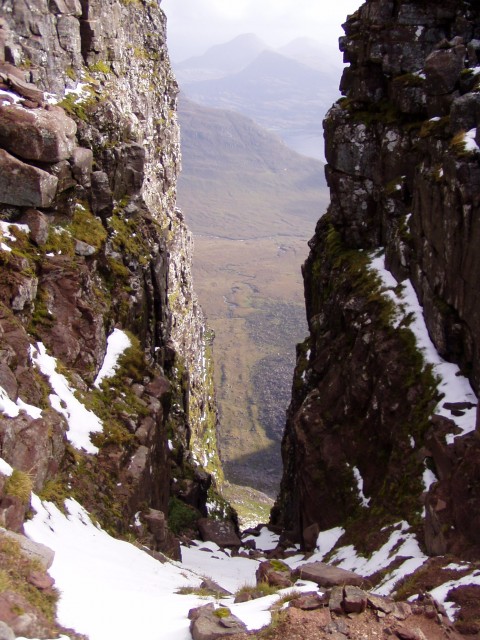 I spent some time sitting on the rock and thinking - do I have enough energy to get to the second Munro top? I was already exhausted. Good Lord, I made a promise, from now on it will be less cookies and more gym! Somehow I gathered my strength and climbed to the summit of Sgurr Mhor. The top was partially in clouds so we only caught a glimpse of Horns and Baosbheinn: The Horns looked at least unfriendly to me. Kevin scared me even more by describing the route as "quite a lot of scrambling" so I said -pass this time- and decided to walk back the way we came. We were just about to set off when suddenly... Strange apparition to the right... I had never seen Brocken Spectre before and I was stunned. We spent another 30 min or so on the top of Sgurr Mhor, admiring the colorful picture. When it filnally dispersed, we headed back to Tom na Gruagaich... The sun was setting and we were running late but I was so excited about having seen the Spectre that I hardly noticed. Watching the sunset on the slopes of Tom na Gruagaich

We ended up walking the last couple of kilometres down in almost complete darkness (thankfully it was a clear night and the moonlight helped us to see the path). Yet it was an unforgettable experience! Since that day on Beinn Alligin I climbed many hills in the Highlands, but I was never lucky enough to see the spectre again. Well, is it true that if you see it once, it means you will die in the mountains? Or is it just a silly legend?...

Great photos of your spectre

Cracking stuff - looks like you had a great day.

Users browsing this forum: The English Alpinist and 63 guests