This was my second walk up Ben Vorlich having previously summitted with my brother back in May (a headlamp adventure at 1am). The weather that night was poor with high winds and dense cloud meaning no Stuc a'Chroin scramble. On this occasion however I was on my own, in daylight, and with a short weather window; a clear'ish morning followed by fog at 11am according to the Met Office website. So I left my central belt home at 4:45am and arrived at Loch Earn at 5:55am with not a vehicle in sight

ya beauty! Boots quickly on, a quick drink and again I was heading up Ben Vorlich- this time minus the headlamp. I had broke my arm 9 weeks before in Glen Coe (snapped at the wrist) and so struggled a bit to get going. I'd done Beinn a'Bheithir 2 weeks ago just after my cast was removed, but it was really tough going after a long period of inactivity to allow the bones to knit. 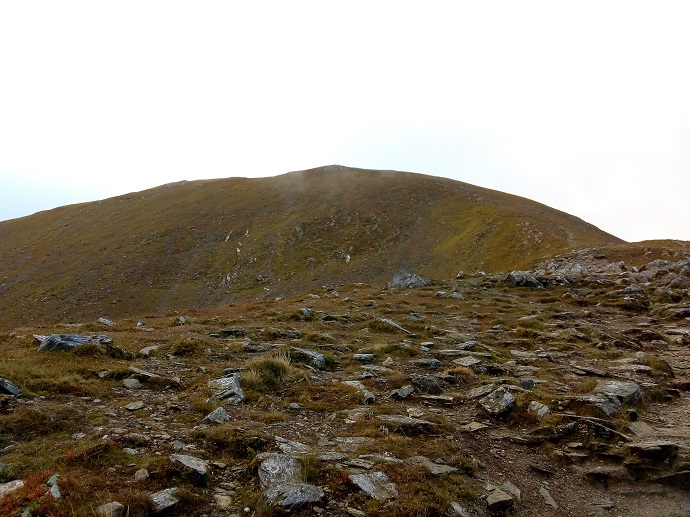 Anyways, I pushed on as daylight proper appeared and I reached the summit of Ben Vorlich at 7:30am in thick cloud and the usual high winds. My arm was beginning to ache a bit from the cold now but having read how daunting Stuc a'Chroin looked when viewed from Ben Vorlich, I thought I may as well take a wee walk towards it to hopefully catch a glimpse before calling it quits. Within a couple of minutes though the cloud had pretty much cleared and I now had a decent view of Stuc a'Chroin. . The walk over is fine- just down some boulders and then along a trail which runs next to a line of old metal fence posts. The trail eventually leads you up to the left of the boulder field at the base of the prow. From there you can take your pick- left scramble, middle scramble, or right scramble with some pathy bits. As I was recovering from a broken wing and was on my own, I decided to go right. You start with a walk up along the left edge of the boulders which leads up and to the right where you can easily find the start of the pathy bit. 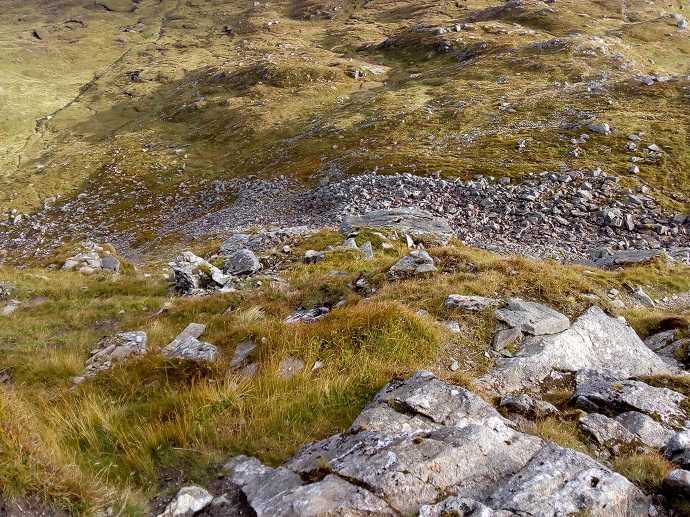 The view back down from the start of the pathy bit

But I abandoned the pathy bit immediately and headed straight up - oh the fun! It was good to gain height so easily with only a couple of minor awkward moves required to progress. I met the path twice and continued up past it, but felt reassured to know that it was in the general area. The view south from the scramble up Stuc

About two thirds up I crossed the path again onto steep grassy stuff. This began leading me up and to the right, whereas the path was cutting far left at this point. I figured I would either meet the path again or find more decent rock further up

but oh how wrong I was! I was climbing up this ever steepening grass slope which was sodden wet and very loose. I did encounter a patch of rock but it was slippy and had no obvious hand or footholds. I improvised my way over it by jamming my foot into a crack and cupping a slightly rounded part of a fairly flat surface to haul myself up, using my knee on top as it was too far for my foot to reach. This very steep grass slope continued up until I arrived at a portion of very large overhanging rocks which again were very awkward with no obvious ways over them, yikes!

I jammed my foot into a gap between them, got a hand into the gap above, then pulled myself up a bit so that I could clasp a slight protrusion in the rock with my faulty arm hand. This allowed me enough balance to bring my other hand up and over to grip the back edge of the rock which had been quite far out of reach. I was then able to walk up the overhanging rock face with my other foot and step up over the top. 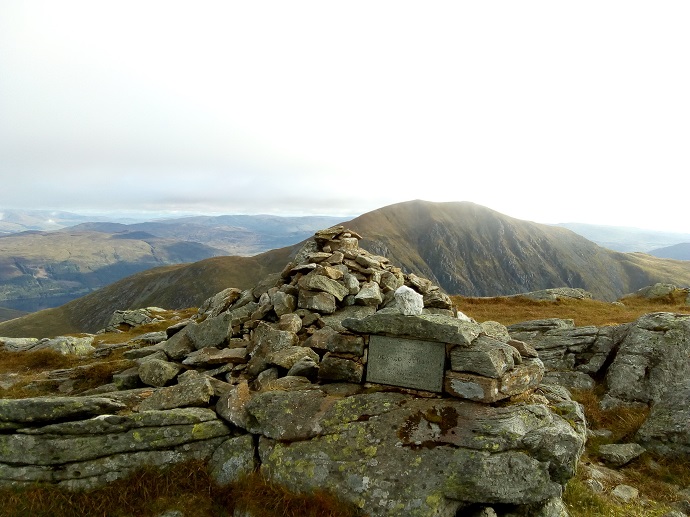 The cairn at the top of the prow It's then a relatively straight forward walk to the true summit cairn of Stuc a'Chroin about a half kilometer away. I think the true summit cairn is on the left. But if in doubt, visit both like I did

The walk back starts off well, passing a good vantage point of both the prow and Ben Vorlich. The small cairn marks the steep drop down. Nice!

You then drop down off the side of Stuc a'Chroin on a steep path, which was wet and slippery today so had to be extra careful here. Looking back up the path which leads down off Stuc a'Chroin

Once you're down this it's an absolute bog-fest until you rejoin the path at Ben Vorlich. Mission accomplished. Return to base.

On joining the path I saw my first humans of the day; a nice couple on their way to do what I had just done. We had a brief pleasant chat then continued on our ways. I encountered many more people coming up as I was going down, even a dude in jeans

. On arriving back at the road it was jam-packed with vehicles. What a difference 5 and a half hours makes

Re: Ben Vorlich and Stuc a'Chroin - It's a wee bit mental!

Those shots from the SaC plateau back across to Vorlich are very cool and very special to me!

Re: Ben Vorlich and Stuc a'Chroin - It's a wee bit mental!

Graeme D wrote:Those shots from the SaC plateau back across to Vorlich are very cool and very special to me!

Thank you Graeme. It was a great day and that is a really wonderful place you chose for your dog.