Have been rather lax keeping up with my walk reports, so time for an attempt to catch up. Retirement seems to have made life busier than ever

So, starting off with most recent, was another jaunt to the Cairngorms, with mentor (at least that's what I think he said?), Big Jesper! Well, to be truthful, wasn't all with him, for reasons which will become all too apparent.
I had stayed the night in Braemar in the wee campervan, having done a couple of hills the day before. The plan was to rendezvous with Jasper and Lawrence, at Keiloch, the next morning, but having felt niggling knee injury and being much slower than this pair, I said I would leave a bit earlier. Alas, Lawrence fell at the last hurdle, when family duties arose that night. Thought I had captured a fine photo in the frost, till I saw horse was in exact same position, on the way back out :)

So, I set off on the mountain bike at 8a.m.,on a cold morning, which must have been about freezing, judging by the frost on the windscreen. Soon passed some amazing sculpture/statues in the grounds of Invercauld House. Jaf, arrived about twenty minutes later and soon set off on the chase to catch up. We both found it a bit tricky following the correct route through the estate and into the forest. If following the WH's route description, Stage 2, where it says "again signed for Slugain," neither of us, or another chap we met, could see that sign! Impressive crags, Coire na Ciche, Beinn a'Bhuird. The Slugain to the left, A'Chioch, to the right.

Anyway, by good luck, or fine navigation skills, most likely the former, we made it through the forest and into the open space of Gleann an-Slugain, halfway across which, the bullet known as Big Jasper, shot by on his bike. It was good having my buddy alongside, knowing I had someone else to blame when my navigation went wrong. Just a pity Lawrence, wasn't there to take the blame as well Next decision was whether to take the Fairy Glen track, or higher route. We chose the higher route, which I think would be better if you are biking it. How do we think that? Because we took the lower route on the way back and came to regret it. The only downside of the higher route, was a difficult drop with the bike, down to the ruin of Slugain lodge, then back up. There may be the option of keeping to a higher track there, but we never explored it. Tors at the head of The Sneck.

We cycled on a bit to where the various paths meet near the Quoich Water, where we chose to leave the bikes. This was a good and a bad decision. Good for me, because I planned to go round in a loop and drop down from Beinn a'Bhuird. Bad for Charles, because he planned to come back via the Sneck! In retrospect, he could have cycled in, probably as far as the Glas Allt Mor/Clach a'Cleirich and had an easy cycle back out too. Anyway, we made good speed on the well formed path, marveling at the yawning corries on Beinn a'Bhuird, which gradually began to open out, as we made our way in. Spectacular! Must be amazing to see in winter, but we agreed this would not be a place to be trifled with in anything other than good conditions - for us, anyway. Garbh Coire, on the north side of the Sneck.

The walk up the the Sneck, was perhaps, a little tedious, but seeing the tors at the top, soon whetted the appetite for more. It wasn't long till we were up on the plateau, with the large tor of Leabaidh an Daimh Bhuidhe, looming into view, across a small depression. Finally, aproaching the summit. Big Jesper and the huge tor of Leabaidh an Daimh Bhuidhe 1171m, marks the true summit, which took us about 3.5 hrs. We both agreed the landscape was quite spectacular, almost like the set from a western movie, or the Arabian desert. Ok, maybe we're both daft Another walker on what we think was the lower top of the summit. The landscape reminded us of the old western, or desert movies. Quite appropriate for us two cowboys :)

Anyway, we easily climbed on to the central lump of granite, but having posed for a few summit shots, we then probably thought, this doesn't look as high as that lump, so we had to make the more awkward scramble onto the adjacent pillar to the south, just to be sure. We thought this was the summit, then decided we'd better do the other column, too, as it looked higher. 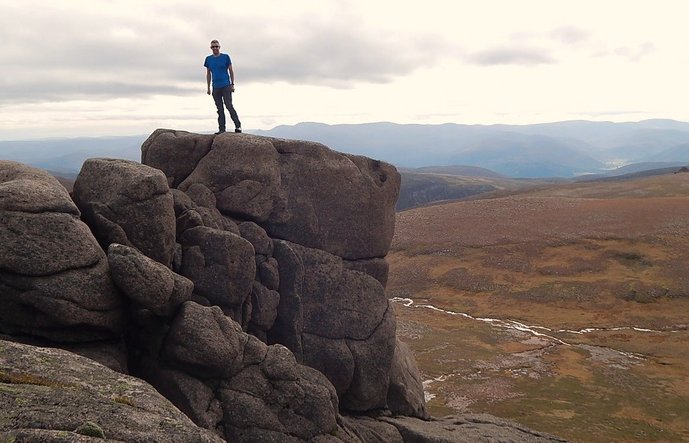 Jaf, probably on the true summit. Only room for one on top :)

We made our way back to the Sneck, mulled some grub and chewed over our options, or was that the other way round?

Charles, watching the clock, was still for returning this way and having viewed the corries, I still thought "I'll do it my way," so Jaf left his rucksack here, while mine traveled west, till we came upon the rather insignificant cairn, marking the north top and summit of Beinn a'Bhuird, at 1197m. On our way over to Beinn a'Bhuird. Coire na Clach and Coire an Dubh-Lochain.

As planned, Charles departed for the Sneck, while I struck south, aiming to keep near the corries, as the weather was still fine. I enjoyed the walk and some fine views, especially looking west to the outline of the big hills and corries in the central Cairngorms. Wow!
Made a bit of a fudge of things near Hourglass Buttress, by heading onto the south top, when a simple check, would have told me to keep SE, for Carn Fiaclach. Across to Cairn Toul and the Angel's Peak (Sgor an Lochain Uaine), peaking through :) 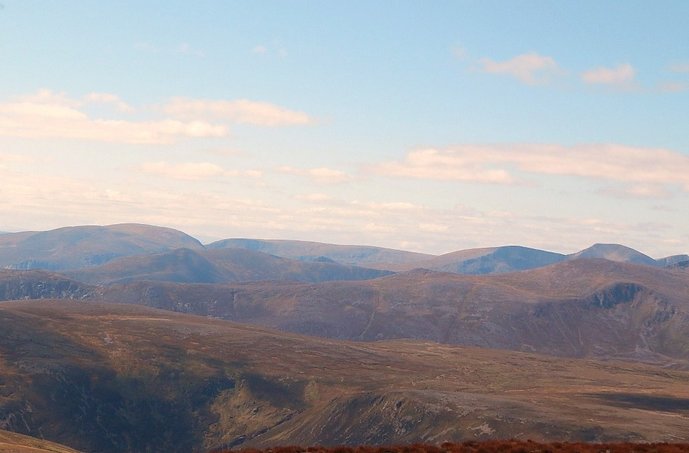 More Cairngorm hills to the SW.


I had made decent progress around the corries, aside from some attempts at selfie's which failed miserably, so was somewhat annoyed, to lose time against Big Jasper, who would no doubt be galloping back to the bikes

Nothing for it, but a bit of a jog here and there, as I made my way down Ear-choire Sneachdach, onto the track on the west of Carn Fiaclach. I am sure there were mountain bike tracks coming down this corrie, though perhaps I'm wrong? Me, on top of Bloodhound Buttress, I think :) Afraid, I couldn't capture this spectacular promontory with self timer, otherwise I might have ended at the foot of the cliff on the other side. Above A'Chioch, I think. One for the guys :)

I continued at a good lick on the winding path, gazing at the expansive hillside in front of me, talking to myself "now, where the bleep did I leave that bike," Gradually began to zone in on the likely area and to my surprise, spotted big Jasper, making headway, toward the same spot, well ahead of myself. As luck would have it, he missed the bikes and overshot, while I managed to go straight there

See! Sometimes the tortoise does beat the hare My bike somewhere on yonder slopes, but where??

Ha-ha, we both had a good chuckle at it and caught up with the bleathers, not knowing that disaster (ok, minor disaster,) lay just ahead. I think normally these things happen to me, but today it was Jaf's turn. As we dropped down toward the ruins of Slugain Lodge, I heard a large fart come from his rear wheel. Ok, it wasn't a Lawrence fart, but much worse than that. Every cyclist who isn't carrying puncture repair kit, will know what I mean - the dreaded puncture. Damn! And, only just on our way back out

Beinn a'Bhuird, left, Ben Avon, right. I think neither of us was especially looking forward to these hills, but how wrong we were. Fantastic day out!

Cursed and swore and cursed a few times, but that never helped, so alas, I left Jaf to make his way back and set off myself. When I got to the estate office, I asked permission to take my campervan in a few miles to pick up Charles and after exploring various alternative options to help, the ladies kindly gave assent to my request. Having ditched my own bike, I went in a couple of miles, if that and picked himself and bike up. Saving a wee bit more time and trouble tramping back. Having viewed these hills from afar to the west, neither of us was particularly looking forward to this long trek, but all in all, we were both taken by the size and spectacular beauty of these hills, despite the wee set back. Another crackin' day

(This was supposed to be a brief resume, which probably explains why I have fallen behind

A great day to remember, thoroughly enjoyed it. Great pics as well.

Yup, was good fun, Charles. Must remember puncture repair kit, in future. Even if we don't need it for bikes, maybe LG can use it?

That was braw, great hills these I agree, I enjoyed them much more than I expected to as well

mrssanta wrote:That was braw, great hills these I agree, I enjoyed them much more than I expected to as well

Thank you, Mrs Santa. A nice, quieter bit of the Cairngorms. Don't tell anyone