The Creag Meagaidh circuit had been the first triple Munro walk in my career, so long ago that I'm not really sure it really happened

I always wanted to come back and enjoy this route in early autumn weather, as it is situated in Scottish Natural Heritage land and there are no stalking issues. Since our last visit, the paths have been nicely upgraded and there is a new visitors hut with toilets (ha ha, no peeing in the bush!). Kevin's recovery was going well and he said he was OK for a longer walk as long as it didn't contain any scrambling or very steep slopes. The short walk up the stone shute in the window can hardly be called very steep, but we still had an option of doing only Creag Meagaidh via Coire Ardair (and returning the same way) if my chum was not able to finish the round. As it happened, he was all right to continue over Stob Poite Coire Ardair and Carn Liath as long as we didn't push it too quickly.
Our route followed the classic Megi circuit. I was tempted by the outlying tops (they look like little re-ascent

) but I didn't want to stretch it too far, 3 Munros was enough for my husband at the moment.

Track_CREAG MEAGAIDH 25-08-18.gpx Open full screen  NB: Walkhighlands is not responsible for the accuracy of gpx files in users posts
Plus it was our 11th wedding anniversary. Last year for the round decade, we wanted to do something special, but all our plans went upside down because Kevin caught shingles

I noticed that August must be his unlucky month, a few years ago he painfully injured his back and that was in August, too! At least this time, the torn muscle was almost healed so we could do our anniversary walk with big smiles

11 years after walking down the aisle, Black Panther is walking up the path 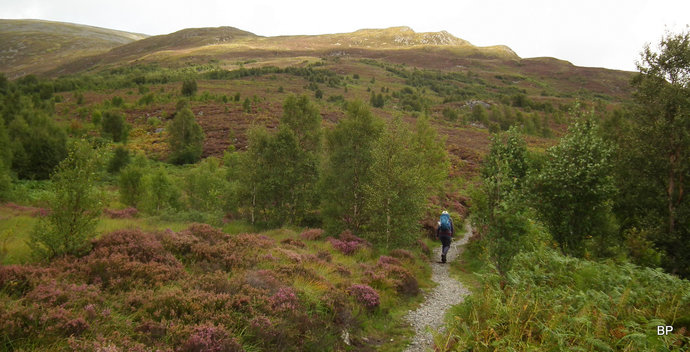 New display boards have been placed on the initial stages of this route: The path into Coire Ardair is such an easy way to gain height without even noticing the ascent! The morning was cloudy but the low clag was lifting slowly and the forecast was good for the afternoon. Yeahaaaay! Bring on a sunny day! First rays of sunshine and blue sky popping up above the cliffs of Coire Ardair: 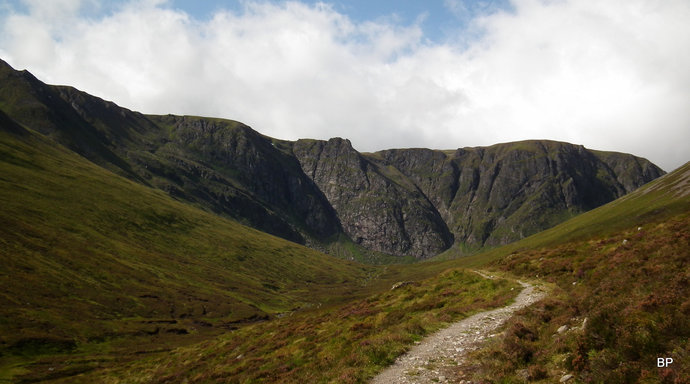 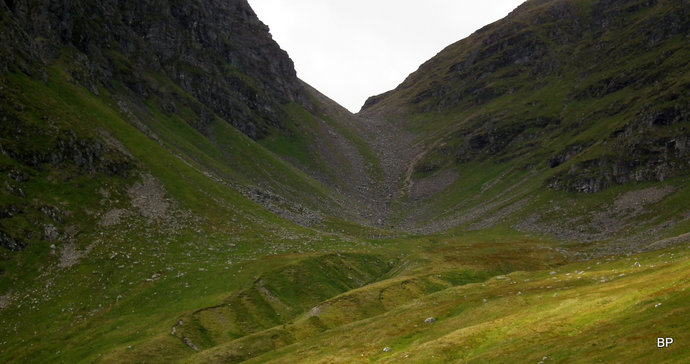 There were plenty of walkers, both in front and behind us, some overtook us but we didn't care. I saw no sense in trying to break the speed record, preferred to take it steady and make sure Kevin didn't make his injury any worse.
Of course, we took a short break by Lochan a'Choire, to take some panoramas:

...before tackling the steepest section of the climb. The Window is quite bouldery but a well worn path avoids all difficulties. It's become more eroded and loose since the last time we were here, but the route is extremely popular, especially on weekend days. 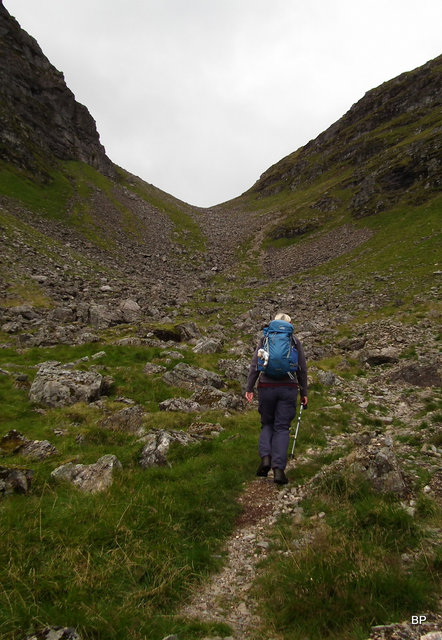 Surprisingly, Kevin overtook me up the loose scree and then he took his pleasure in photographing me from above, in the most embarrassing moments, when I struggled for balance on the eroded path 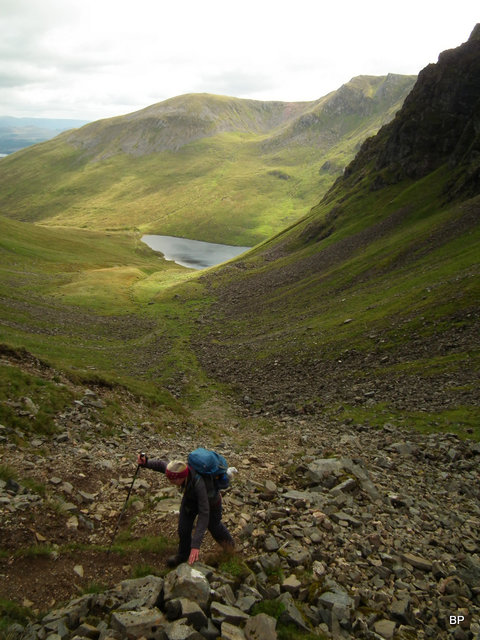 I wanted to prove to Kevin that even after 11 years of chasing him up Scottish mountains, I was still in good form, so I took off from the top of the window like... well, like a cat chasing its prey! 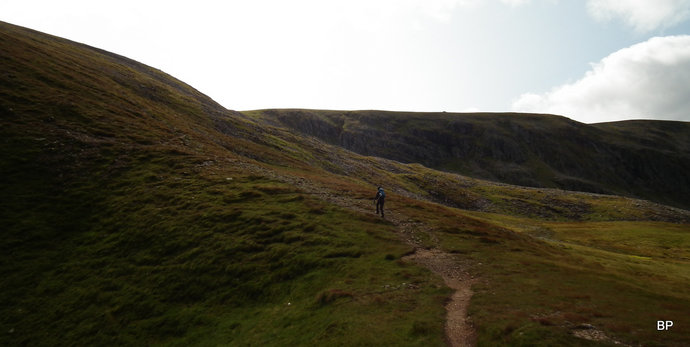 Lochan Uaine and the northern cliffs of Creag Meagaidh:

The impressive view down to the glen of Allt Coire Ardair, Loch Laggan on the horizon:

The paths up Creag Meagaidh are easy to follow. Soon we were on the main plateau and heading for the Mad Meg's Cairn:

Not long after, we reached the summit cairn of Megi itself. A group of people were just leaving when we arrived. Shortly after, another walker has arrived and we had a friendly chat about mountains and weather. Despite it being a repeat for us both, we felt like we have achieved another milestone, especially Kevin, who lasted in this marriage for the whole 11 years and didn't run for the hills

Lucy was the only one celebrating a new Munro, her 88th one: 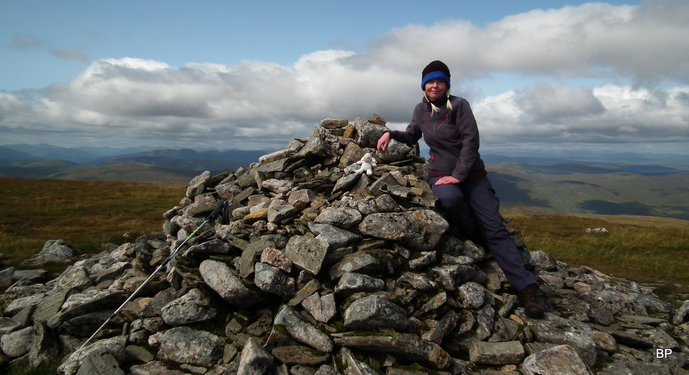 View south from the summit:

We had something to eat and drink and then I asked Kevin if he felt OK for the other two Munros? He was fine. To be honest, there is hardly any reascent between them (at least it doesn't feel like much) so it was a perfect route for Kevin to regain his confidence as well as his fitness.
Looking back at Creag Meagaidh from the slopes of Stob Poite Coire Ardair:

View down into Coire Ardair:

There are two summit cairns on Stob Poite Coire Ardair, not sure which one is higher (they look even to me) and frankly it doesn't matter as you will walk past both when doing the circular route. My snap was taken by the eastern one: 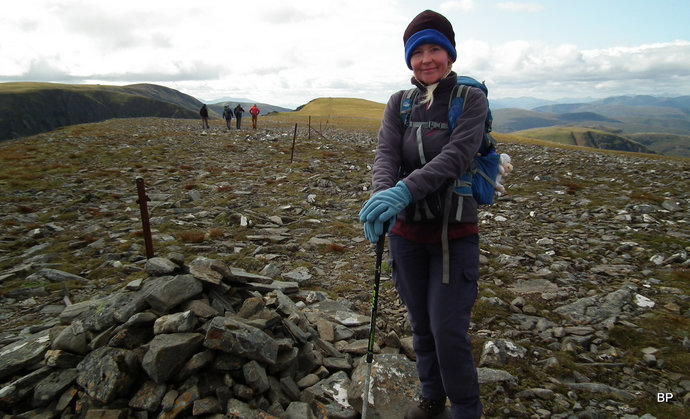 As we continued along the wide ridge connecting the second Munro with Carn Liath, the best views were definitely to the south, to the corrie below us. Kevin took the opportunity to take more panoramas:

View north-west, with Loch Lochy Munros and Benn Tee on the horizon:

The ridge continues to Carn Liath:

Lucy on Carn Liath - her 90th Munro! Soon she will be celebrating her ton, probably the first mountain lamb to do so We took a longer break on the summit of the last Munro. It was nice and warm now, so we stretched our legs by the cairn, enjoying the afternoon sun. Probably the last touch of summer...
Creag Meagaidh and Stob Poite Coire Ardair from Carn Liath:

It was a fine day after all and even the steep-ish descent didn't spoil our good mood. In wet conditions, the well-worn path from Na Cnapanan would be very slippery, but it was relatively dry so not too bad underfoot. So far so good.
On the way down, looking back into Coire Ardair: 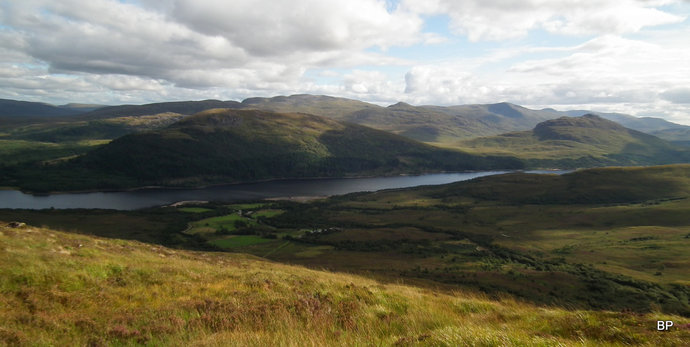 The only unpleasant bit was the final meters of descent (before returning to the main path again). It was very eroded, wet and so overgrown that it felt a little like the scenery to the Adventures of Indiana Jones and Kevin joked that next time he'd bring a machete

Overall, it was a successful walk. I'm glad Kevin is returning to form before the coming winter. Hard to believe that 11 years have passed since we started our journey together. And it's the walking side by side I always appreciated most. As mr Saint Exupéry said once, “Love does not consist in gazing at each other, but in looking outward together.“ In our case, it's looking together towards the summit of one more mountain