Trotternish ridge South to North ‘Three attempts'
The original plan was to leave the car in Portree, camp around Hartaval and catch bus back from Floodigary the next day
Early June in Portree at three in the afternoon and most people were eating ice cream while I hiked through town with a heavy rucksack, feeling very old, a little hot and probably looking rather stupid. Six hours later I was at the southern foot of the Storr completely knackered. Six hours, six miles a complete failure. Portree to Beallach Beag, just south of the Storr is pathless bog the majority uphill. It may be for the purist walking the whole ridge but it is mindlessly stamina sapping hell which I recommend is avoided. It may look flattish but it is undulating peat hags with rocky outcrops which make walking in a straight line impossible, each step is an effort as your foot has to be prised out of the ground and raised up above the long, grass/ heather/moss only for it to sink down into the vegetation again.
Camped at Beallach Beag but next morning with aching legs and defeated in rain and cloud I hitched back to Portree, the car and the comfort of the Arriba Cafe.
Second attempt was in August, I started where I left off at the south side of the Storr. Rain and low cloud again forced me to retreat from the ridge having walked the Storr, back to the car park and then drifted north in the car to the Quiraing, and with improving weather walked from the Quiraing car park to Sorin Vorin.
This left the main central (quiet) section of the ridge.
November 9th clear and sunny, forecast was good. Parked at Storr car park and took seven and half hours to Quiraing car park, where I hitched back to the main road and a cup of tea in Staffin and a lift then back to the Storr car park. Many thanks to the good people of Staffin for providing lifts when asked.
Favourite peak along the ridge is Beinn Dearg, (park by the waterfall and go direct to the top keeping right of the castle like rock, there is steep grass scrambling and billiard table lawns), and of course Beinn Edra where I always feel at home.! 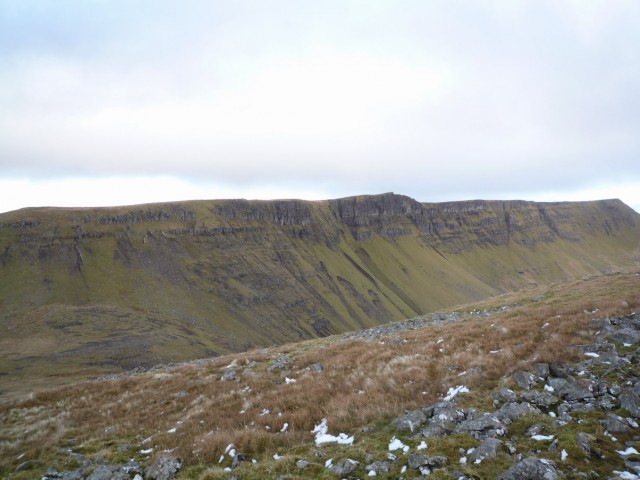 A Trotternish traverse is very high on my wishlist.
Perhaps in 2011.

Yeah, I'd like to do the traverse too - great photos of it there

You're probably right to break it up like that though, although I'd probably try to do it the same week or something but maybe break it up into a few days. I wouldn't want to carry a heavy pack along it though...

Would also love to do this

Took me a few years to fully appreciate it but there is much more to Skye than just the Black Cuillin!

I'm looking forward to everything on Skye... except the Black Cuillin (and probably also the Red)

Just completed the Trotternish ridge from North to South and can understand your frustration with the first part from Portree. I recommend starting at Flodigarry for several reasons:
i. the area around the Quiraing is so spectacular it would be a pity to abandon the walk before getting this far
ii. with a strong north wind behind me it was much easier climbing up the slopes.
iii. If you start at 9am you can enjoy a mid morning haggis roll from the man with the van in the Quiraing car park as you pass by
I took 9 hours end to end but baled out at the Storr. I found the route exhilarating but at times the lack of a path made it hard work. There are long grassy bits but there are other sections of bog, boulders and uneven moorland. And there are plenty of ups and downs so don't see this a pure ridge walk.
On the peak at Quiraing I looked down on a pair of golden eagles in their eyrie. Quite spectacular.
And one final point - in the whole 9 hours I didn't see a soul on the hills, it's quite an isolated walk with no easy safety routes down to a road. On the other hand my mobile walked almost all of the way..

We planned to do this last may. But weather was crap. So trip cancelled. But planning now doing it end of this month. Goig from north to south

Wonderful, wonderful, great pictures and wetting my appetite for my trip in September. Thanks headless