Runrig's farewell concert in Stirling gave me the chance for a second trip to Scotland this year. I was one of the lucky guys to get two tickets for the very last show on Saturday August 18th - although I almost had a bad conscience about this, given how Germans and Danes outnumber Scots at such events, which is not quite right.
To my great pleasure, and much to her credit, Mrs. Zatapathique came along, although Runrig is by far not her favourite band - she very much prefers early New Model Army and Bad Religion. We've been at two Runrig concerts before together, and at least she had to admit that they are a really good live band, so it wasn't too bad for her in the end. So before this report takes us into the hills, I'd like to add a small paragraph about Runrig. They were founded before I was born, so they have always been there as far as I can think back. The radio station I listened to as a kid played them very often, and Runrig often topped the radio station's own charts that were voted by the listeners every Sunday. Their mix of rock music and Gaelic tunes immediately appealed to me, and as someone who had always been interested in languages, the Gaelic texts fascinated me. It wasn't only the impressive and, for a small German kid, otherworldly sound of the language - just listen to Calum speaking the words in "Pòg Aon Oidhche Earraich" (One Kiss One Spring Evening), especially the verse

"An Ruis a' tuiteam sios mu'm chluasan
An Ear Mheadhain am brot cho dorch
Is thusa, uilc is a' mhuirt is a' shabaid
Na mo bheatha a h-uile oidhche"
(Russia is falling down all around me
The Middle East in a broth of darkness
And you, evil, murder, and violence
In my life every evening.)
Lyrics and translation taken from "Flower of the West - The Runrig Songbook"

(This is by the way a fine example of how Runrig have always addressed the problems of the world in their songs, and not only sung about love and landscapes. Calum was writing a love song in 1992, but when the 6 o' clock news came on during the writing, full of the usual negative events that almost all news consist of, he weaved it together to this quite paradoxical song.)

It was also that to my kid's eyes, the written words seemed to have nothing to do at all with the pronunciation. Now that I've learned a little bit of Gaelic, it all makes sense, like Beinn Mheadhoin = Ben Vane. It all comes from trying to express approx. 60 phonemes with just 18 letters... The first Runrig album I owned was "Amazing Things", followed by "The Cutter and the Clan" and then all the rest back to "Play Gaelic" and up to "Mara". I was very disappointed when Donnie left the band, as I had always wanted to see them play live, but couldn't go to one of their concerts as a kid/adolescent.
It wasn't until 2005 that I listened to their "second career half" records with Bruce Guthro for the first time. I had always avoided listening to their new material for fear I would not like it. Needless fear - I liked the new albums immediately and regretted not having listened to them earlier. I am still impressed how they managed to adapt their songwriting so well to Bruce's voice and vocal range. "Everything You See" is definitely one of their finest albums.

It was also Runrig who first awoke my interest in Scotland, mostly its landscapes and history, as evoked in so many of their songs, and at this occasion, I'd like to thank them so much for this. I'd have missed a lot in life without their music. Tapadh leibh, Runrig!

For once in my life, I wanted to see them live in Scotland. I had already missed the 40th anniversary show (too close to our wedding), so this was the last chance. The people waiting here and then running at full speed to the stage 4.5 hours (!) before the start of the concert were mostly Germans, we were told later... So typical! :-D Photo by Mrs. Zatapathique

What can I say? The concert was wonderful and sad at the same time, stirring up many memories connected with Runrig songs. I was more than happy that Donnie performed as well and mostly played Runrig songs (although his solo records aren't bad at all). In concert - if this is a copyright problem, I'll remove the photo One of the highlights - the guitar on the castle walls. Photo by Mrs. Zatapathique

The weather was fine during the concert, only a few drops of drizzle, and the forecast for the following day was actually quite good. The plan was to drive to Glen Clova from Aberfoyle, where we had our accommodation, and conquer Mayar and Driesh. When we left Aberfoyle, the skies were grey and the clouds low, but this didn't bother us too much as the forecast predicted it would clear up during the late morning / early afternoon. At our arrival at Glendoll parking, still the same picture, no mountains to be seen. 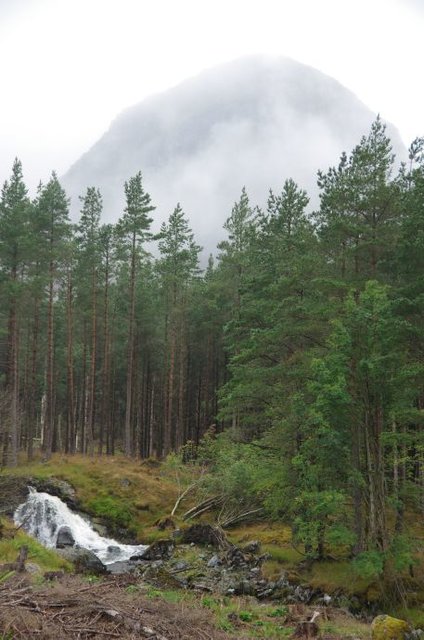 We followed the excellent track up to Corrie Fee, a kind of nature discovery path with some information about wildlife and geology. Corrie Fee was praised as one of the great natural wonders of Scotland. It certainly attracted a great number of visitors of the Nematocera family swarming around us as soon as we left the forest. It was almost impossible to hold the camera still for a photo for fear the hands would be covered in midges within seconds, so we hurried to get moving again. The clouds were very low, but the Corrie was still very impressive. Gloomy, but beautiful none the less

We continued along the beautiful path across the Corrie, following a line of drumlin-like mounds of probably glacial origin. At the far end of the Corrie, the path began to rise, and we slowly entered the clouds. We had a few words with a couple who had passed us and whom we had passed several times along the path. They decided to turn back and not go up to the plateau. Wise move. Looking back over the mounds The head of the Corrie Looking back down, wise people going back. We went on... 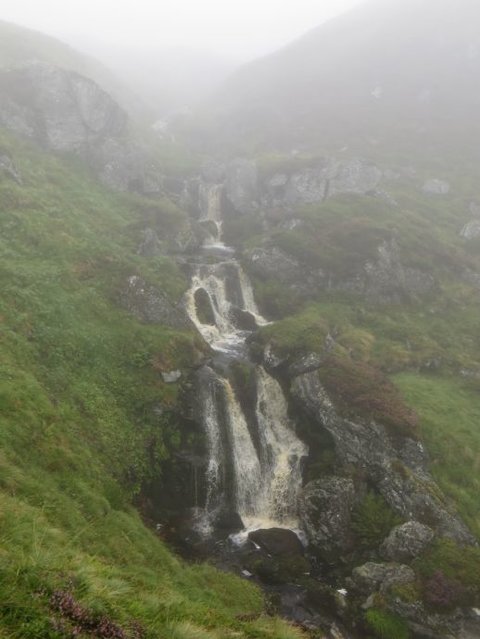 The waterfall. Photo by Mrs. Zatapathique

We went on, and the humidity slowly started turning into drizzle, then rain. The transition was almost not noticeable, until I saw little waterfalls coming down from my Aussie hat each time I looked to the ground. Visibility was practically zero, but the clear path led us to the summit of Mayar without problems. The skies now wept abundantly, an appropriate behaviour for the day following Runrig's career end. We didn't linger long on the summit and set off to the East to reach Driesh. When the ground levelled, we met a couple from Dundee who had been deceived by the forecast as well ("It couldn't have been more wrong"). They knew their way blindly, as these were their "backyard hills". Still, they had missed the branch-off to Driesh, but didn't mind much given the weather. We had to rely on map and compass and found the branch-off easily. The ascent to the summit of Driesh was short - luckily. The drizzle did not seem strong, but it sure carried down a lot of water from the sky. When I put down my backpack in the summit shelter and bent down, a big waterfall came gushing down my shoulders. Possibly the water had accumulated in the hood of my blue raincoat. Everything was very wet now. After I had performed my secret summit ritual (shouldn't forget to allude to it here and there), we had a quick banana and hurried to get down again. When we had reached the path along the Shank of Drumfollow, the visibility got better and the rain less (or so it felt). "Didn't it just get a little brighter?"

Along the path, we saw some tools including heavy hammers, possibly for path work. The view was back again, at least to the other side of the glen. Back at the parking, we were glad to have shelter from the rain in the car. Mrs. Zatapathique was quite happy with the walk despite the weather, having conquered her second and third Munro - even though she had "Scotland's favourite view" on all three of them... But she would be lucky the following day on Mount Keen.

The deviation from the track in the beginning of the GPS route must have been due to bad GPS reception. We definitely stayed on the track...

2018-08-19 Mayar, Driesh.gpx Open full screen  NB: Walkhighlands is not responsible for the accuracy of gpx files in users posts

Re: Weeping skies after Runrig's farewell

It’s funny, my wife and I always loved runrig and saw them live every few years, from their early days in portree hall. We didn’t manage to get tickets for stirling and ended up travelling to Berlin for the last time we saw them. We felt as though spandau castle was full of Scottish people that night!

Re: Weeping skies after Runrig's farewell

Orosay wrote:It’s funny, my wife and I always loved runrig and saw them live every few years, from their early days in portree hall. We didn’t manage to get tickets for stirling and ended up travelling to Berlin for the last time we saw them. We felt as though spandau castle was full of Scottish people that night!

Funny indeed - like reversed role. Stirling was full of Germans and Danes...

Their Bluray and CD set of The Last Dance is scheduled to be released on August 16th, by the way.