During a really hectic week you would have thought we would want a chill out Sunday, but after a restful Sunday the week before, we decided the boots needed an airing, and what better way than with the possibility of a wee bit of snow!

Munros were chosen and as I’m trying to bag 10 by the end of the year, the possibility of the 3 at The Cairnwell looked promising (which is not bad going, as Jockstar only started getting me into the Munro bug when I reached my first one on the 8th Oct 2010!)

Still shattered from the events of the day before, when it was off to Murrayfield to see Scotland play an eventful game against South Africa (resulting in a win for Scotland, great game). It was then a quick dive across to the west for a fantastic Italian meal in Glasgow (never had a seafood dish like it, just absolutely wonderful food and loads of it, leaving me feeling totally full up to the brim) Then to really top the day of a concert with Jools Holland. What a totally magic day

. So we had decided to set the alarm for 6am, but needless to say, did not manage to surface until 7am after the fantastic events of the day before, those couple of drinks when we got home last night did not seem like a god idea now!
Breakfast was hard going on the Sunday morning, as I was still full from the fantastic meal the night before, but needed fuel for the day ahead. So a convincing Bri talked me round to a healthy breakfast (which I was glad I had later today). Lunch made up and on the road by about 7:45am. 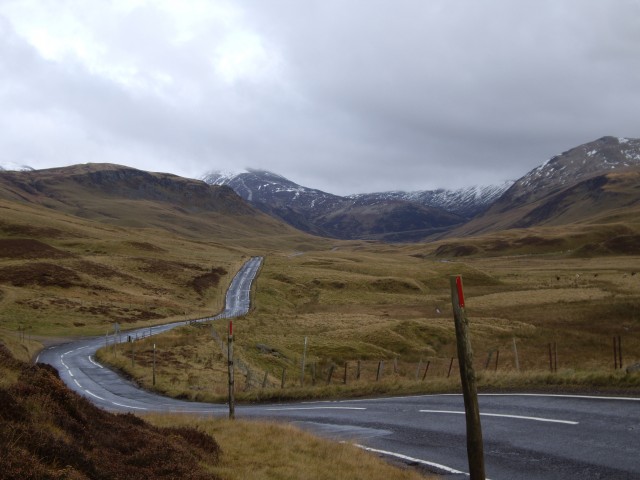 View of the road to Glenshee

. There were a few empty cars in the car park, but not a soul in sight. I was glad we had seen the mountain rescue team who were on what looked like an exercise just before the car park, really hoped we would not have to meet them in person later on!!! 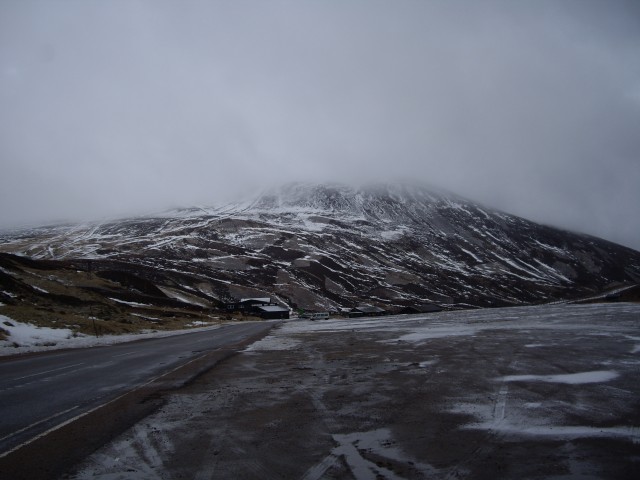 Glenshee car park and view of what was to come!

Kitted up and off we went, couple of slips on the ice before we even got to the café, as this was our first time in real snow, just a bit worrying! Anyway Jockstar had worked out the route and map in hand we set off for Carn Aosda. 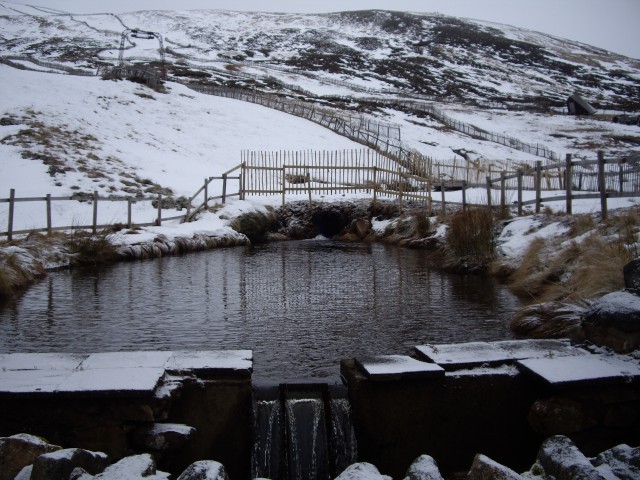 Stream by the Cafe at the start 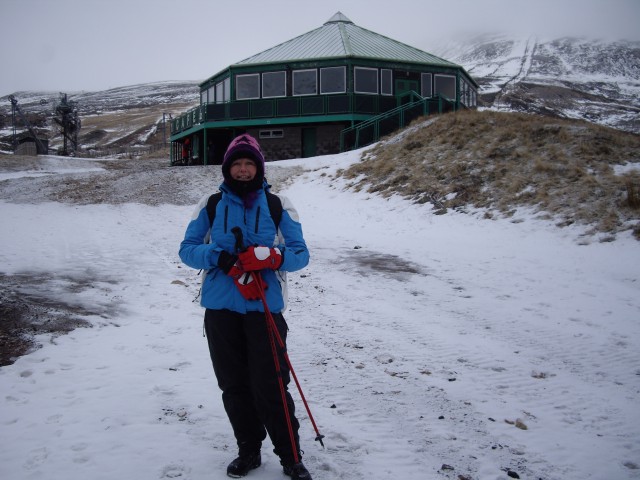 Suhowfar front of the Cafe at the start of the walk 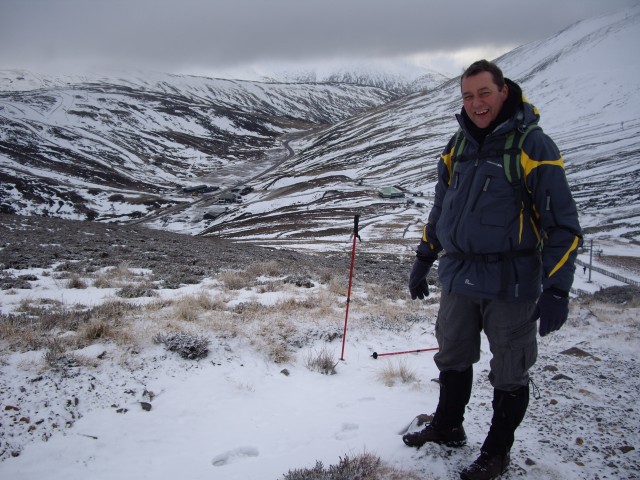 We met a couple on the way up who were blowing of the cobwebs after their group meet meal the night before, the let us know that once at the top we would be at our first Munro of the day within 10 mins. Phew! What a sigh of relief from me, as my legs were still warming up. 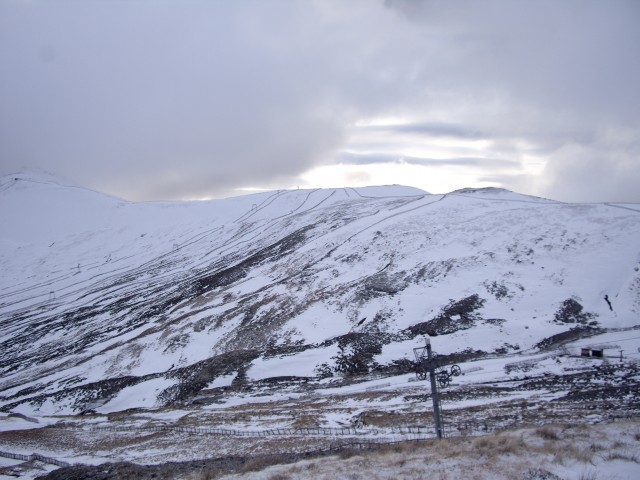 Carn Aosda in the distance 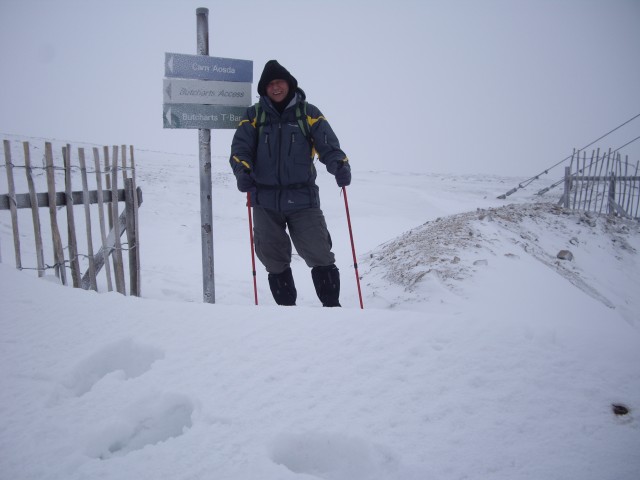 Jockstar checking this is the way!! 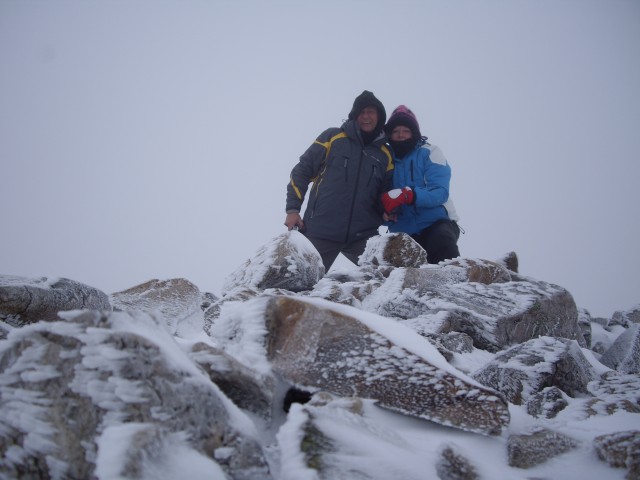 Carn Aosda 1st Munro of the day in the bag!

After a few pics at the cairn, it was back down the same route with blowing winds. Jockstar had worked out the next route to our next one that would be Carn Gheoidh, so through the wind and snow I followed on. The clouds cleared enough at times enough for some wonderful photo opportunities including the totally frozen Loch Vrotachan. 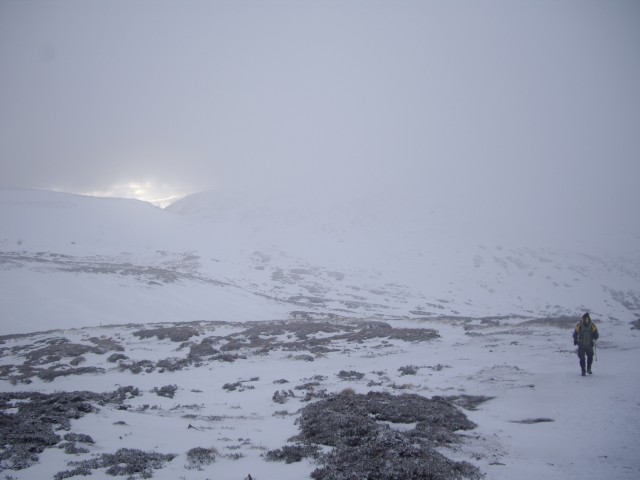 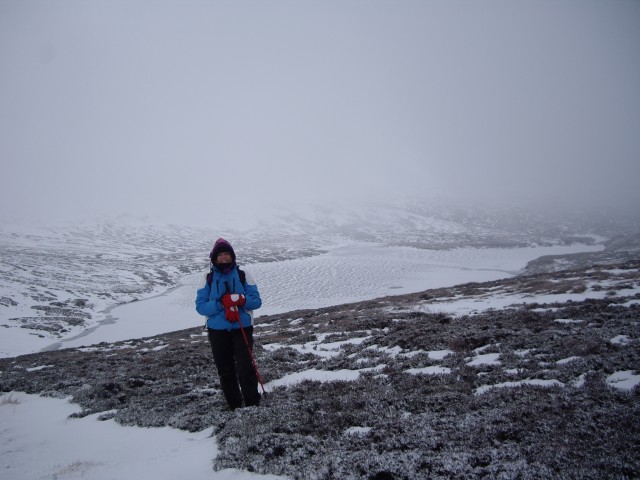 Following directions from WH route we took the left path. Once on it we spent a couple of moments watching a few white mountain Hares frolicking in the snow, this was amazing how big they were and how quick they ran across the snow, wish I had their energy! Unfortunately they were too quick for any photo opportunities

It was then the snow deepened, needless to say a few of falls by myself, as it was over my knees. Lucky for Jockstar he has a bit of extra height on his side. That said though it did not stop him taking a couple of falls also shortly after I had. At least no damage done to either of us and thank god for waterproofs! 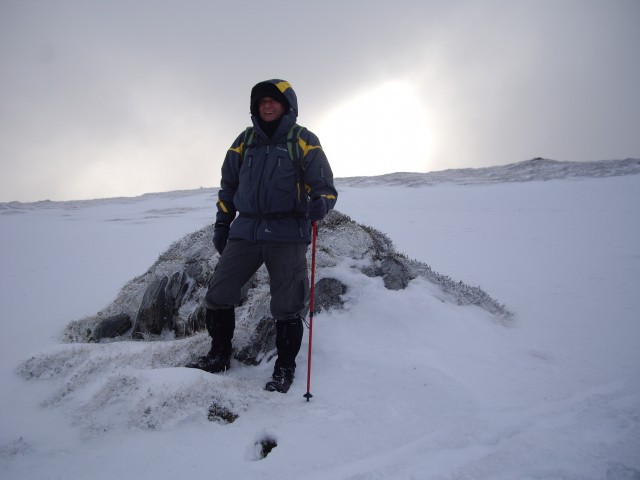 If only this was the second Munro Suhowfar says... 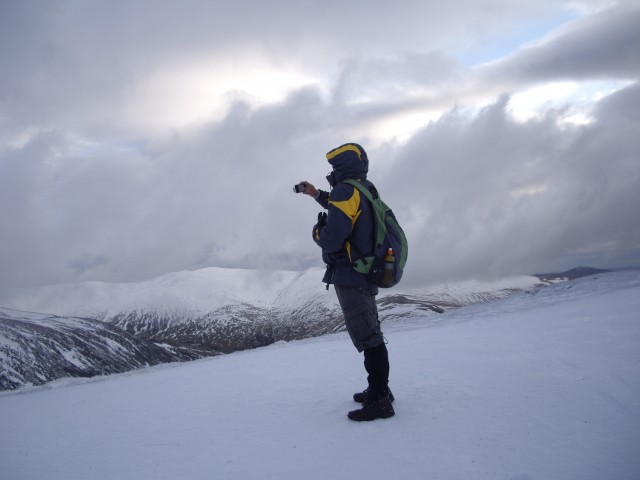 I think No 2 Munro is over there somewhere Jockstar says....

The cloud kept coming in, but luckily Jockstar knew where to go and although he had not been here before, his good map reading and instinct kicked in with him and commonsense prevailed to lead us up to our second Munro that was Carn Gheoidh. That was when the wind started really howling round us. So after a few quick photos, it was off again back down the same route in the wind and snow. 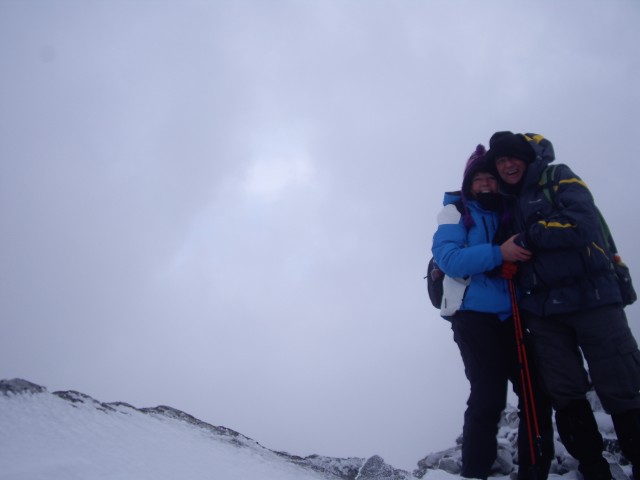 Finally at Carn Gheoidh, thank god for camera timers as not a soul in sight!!

As we neared the ridge near the ski lift, it was time to make the choice, back down or complete as we had come to do the third Munro (The Cairnwell). While standing against the snowdrift against the ski lift fence, we decided to re fuel and rolls and sugar fixes which were quickly eaten. It was then decide, there was no real choice!

We had come to do the three, weather was not bad by now and the light was still good, with more than enough time to complete our third one of the day, so up we went…… 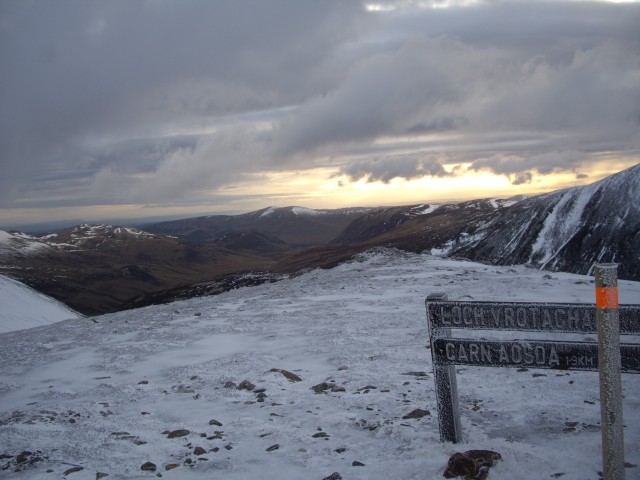 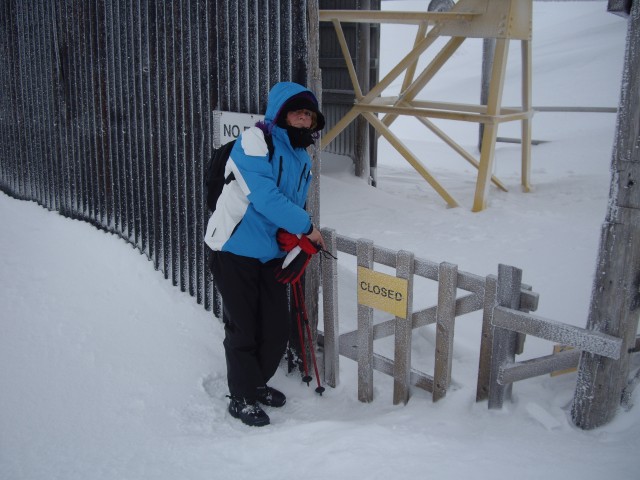 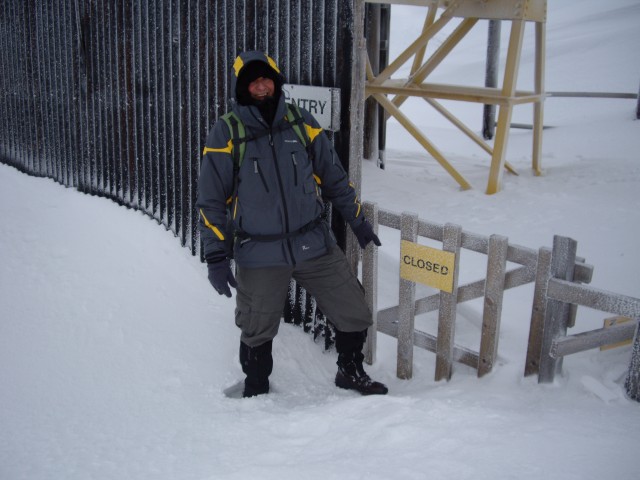 Nope Jockstar they will open it up for us, only one way down & that involves snow & a fence!!

Well the third Munro (The Cairnwell) was reached….I could not believe the previous write-ups I had read were bang on! Concrete jungle, even with barbed wire!! But still the views cleared again so few photos and the then the decent awaited us. 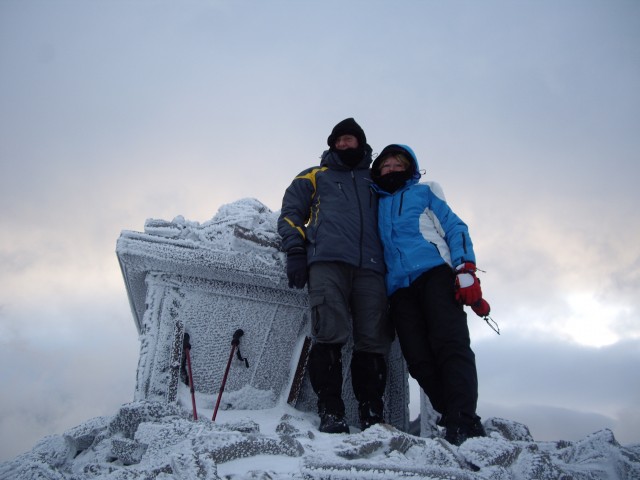 Number 3 done, can we go home now.. Red wine to celebrate is waiting!! 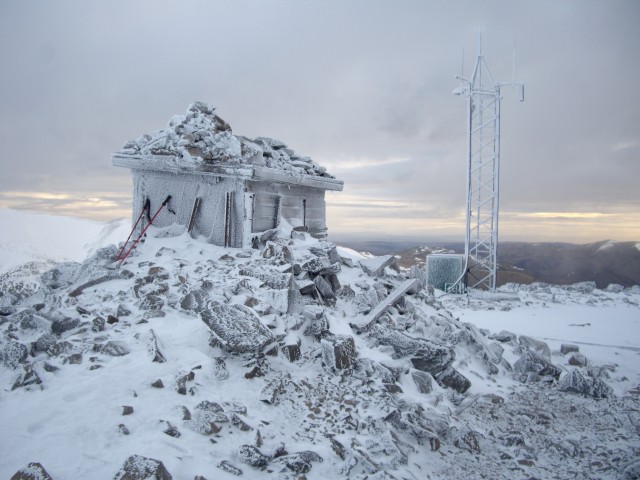 Not a bonny Munro, but enjoyed bagging the 3 of them (The Cairnwell)

The way down was fairly steep and thanks to Jockstar for digging in his heels to make steps for me to step into down to complete the decent safely, with my by now aching legs. 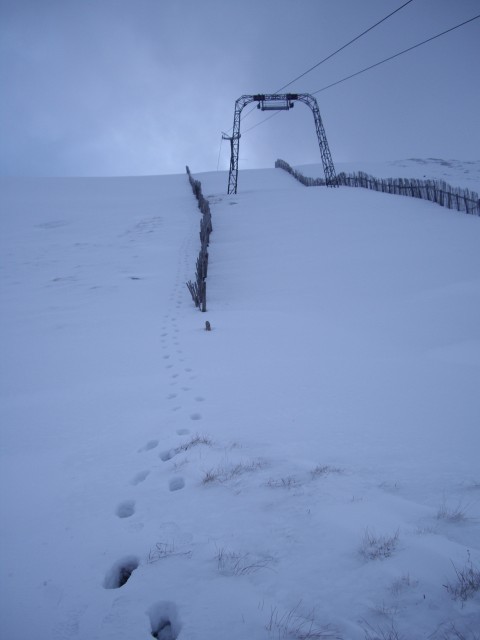 Thanks Bri (Jockstar) for my stairway to red vino that's waiting for us, Mrs Jockstar (AKA suhowfar)

The car and it’s seats were a welcoming sight. But what an achievement by us both, I had never done 3 Munros in one walk. We had both not experienced a walk in snow like this before (thanks to Bri for leading the way safely). And I had bagged my 9th Munro. Some are really hard going, but loving each one!!!

And on a final note for those of you that did not get to see cause you were up the hills...... 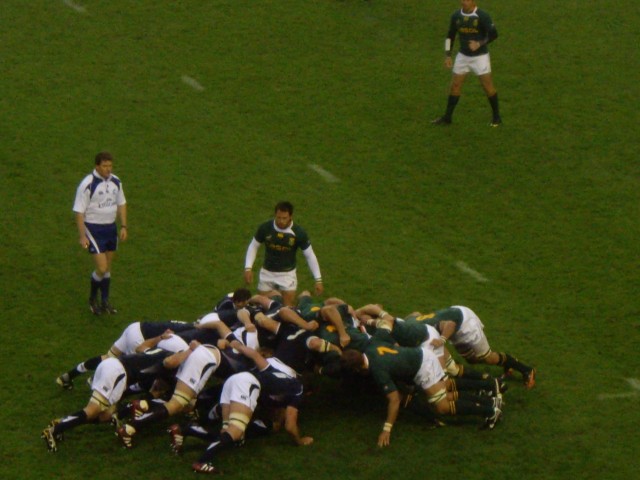 and The Jools Holland concert 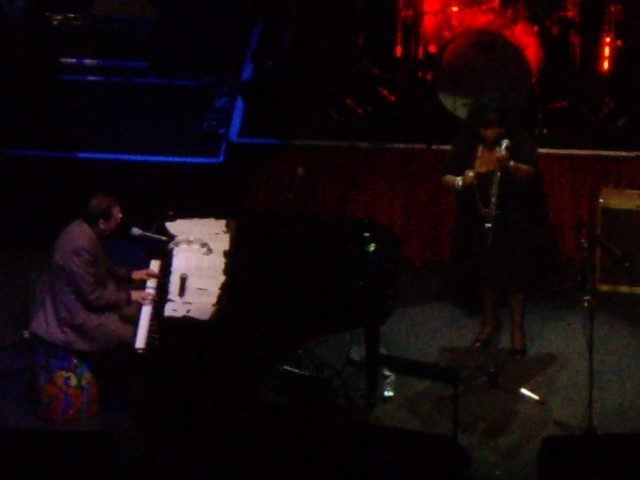 Come on Sue wheres all your pictures

Sorry GLW, not as quick on the up take as Jockstar with my reports yet

, but hope you enjoy this one..

Interesting how we can both do a report and make them both different but telling the same story. I think you have the edge with yours due to the photos telling a better story - but my landscapes are better!! haha !

I was just thinking the very same....

A brilliant report and great photos Su, I bet you get more than your 10 this year

Not sure about me having the edge on this report Jockstar!

I think the stunning views on your photos in your report on this walk are a lot more dramatic and really show both the hills and the sky in all their glory, just as we encountered them on the day

Merry-walker thanks for the feedback. I think you may well be right, snow permitting we are off out up the hills to bag a few more this weekend. So hopefully mission of number 10 Munro, plus a couple more, will be accomplished this weekend