I had meant to go over to Islay on the Friday and Saturday of my first week in Tarbert, but the weather forecast wasn't playing nicely. By Saturday the forecast was for light rain, which I decided was good enough, and set out for Cowal - last year I walked the Cowal Way as far as the junction at the start of Glendaruel, where the Portavadie buses turn off for Dunoon or Rothesay, so that was where I had to get back to to pick it up and walk through to Glenbranter and an Inveraray bus.

The ferry was running late, as it had been all the day before (I don't know why it couldn't catch up with itself overnight), but the bus waited for it - one advantage of Saturday was that a bus ran an hour earlier, so it was only about 9 when I started walking from the junction. From the main road I turned back down to the Telford bridge at the start of the Otter Ferry road, as that was the last point I knew I'd definitely reached the year before. The glen itself stretches up between low hills, and the route takes you off the main road again almost straight away to pass through the village. The hotel still has its signs - and its windows - and looks open until you come to the door. I'm a bit surprised it couldn't stay open - the Cowal way can't be all that busy but could presumably be made busier, and there are a couple of B+Bs further up the glen, too far to reach in a day's walk from Portavadie, and it's only about a mile from the main road, as well as having at least some local trade. There's a little local attraction to tempt people from the main road, too - carved stones in the graveyard at Kilmodan church, now under cover in a little building. There are some vivid images on them - apart from the monk and animals in the picture, I really liked a man who seemed to be about to do the highland fling! The church is in a highland style, broader than it is long, and the bell rope had been left hanging down very temptingly... Inside is a monument to the Scottish Enlightenment mathematician Colin Maclaurin, who was born nearby.

Going through the village takes you over another old bridge onto the 'back road' through the glen - not that the main road is very busy, but this one is even quieter, and the Cowal Way uses it for its full length. 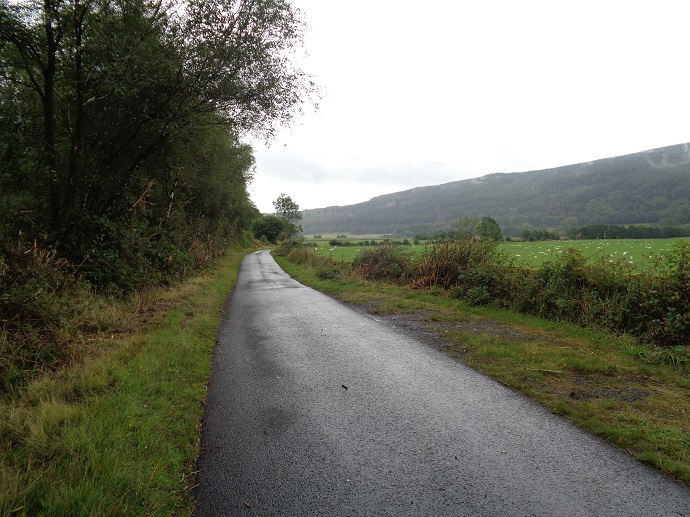 The main landmark of the glen is a fancy arch which doesn't now seem to be the entrance to anything, although there is a little cluster of estate buildings after it, some of them now used as holiday lets. 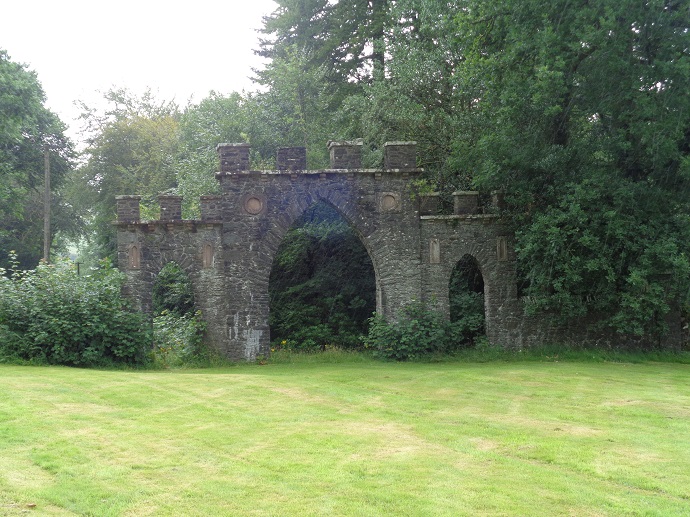 A text from my sister informed me that Tarbert had rain coming in sideways, but I seemed to have left the bad weather to the south of me when I got on the bus at Portavadie - I could see it passing over when I looked back down the glen, but it was generally moving across the hills rather than towards me. Further on the road looked even more unused, with grass growing down the middle of it. 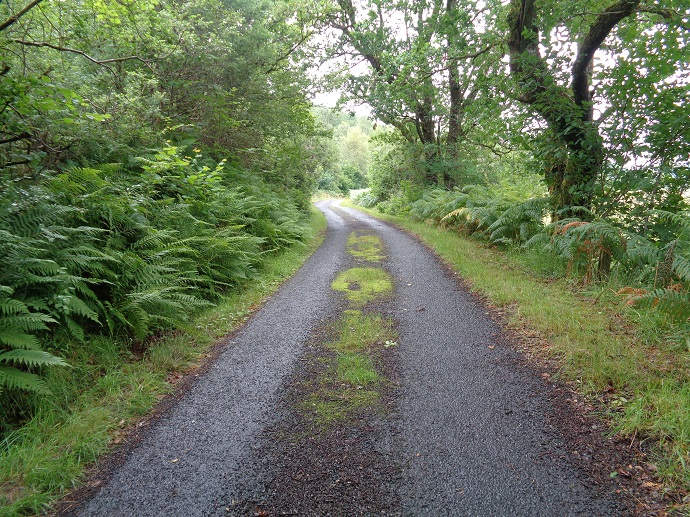 Grass in the road

Where I met the main road I made a short detour up to the entrance of Dunans Castle, which has another Telford bridge - impressively tall for its size, like a Dean Bridge in miniature, but impossible to photograph for the trees clustering around it!

The edge of the rain had caught up with me by now, and for a little while down to the farm at Garvie it was even pretty heavy, but it eased again as I began to climb the track across the hillside. There was cloud sitting solidly on the tops of the low hills ahead of me, but as I got further up it was easier to see that I wasn't going that way, and that the track swung round to the left below it. By the sharp bend in the track in was dry, and as it was just on 1pm I sat down to eat my lunch, in case I didn't get a chance later on. Cloud on the hills

A gate a little bit further on brought me into the forest which would keep me for the rest of the day - great swathes of Cowal are taken up with forestry plantations, only under slightly different names, so that this was the Glendaruel forest instead of the Glenbranter forest. Gate into the forest

It's not nearly as claustrophobic as it sounds, however - there are a lot of open spaces up here, some recently cleared, but some looking like they have never been planted. 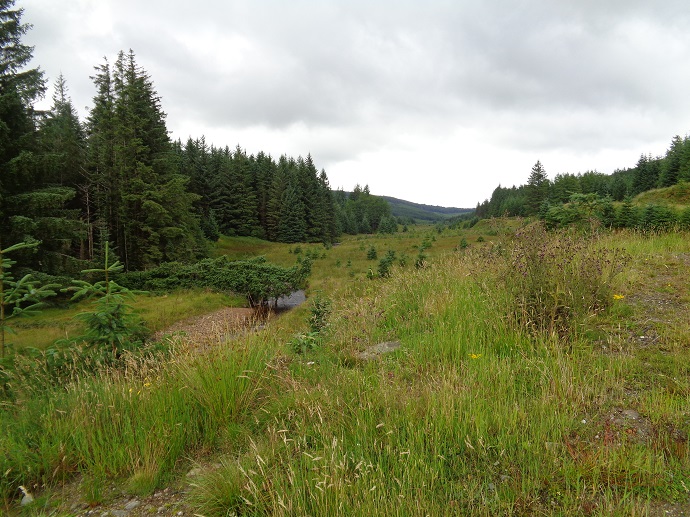 The only real landmark was the ruined sheepfank at Tom a' Chromain, left over from when this must have all been more open ground. 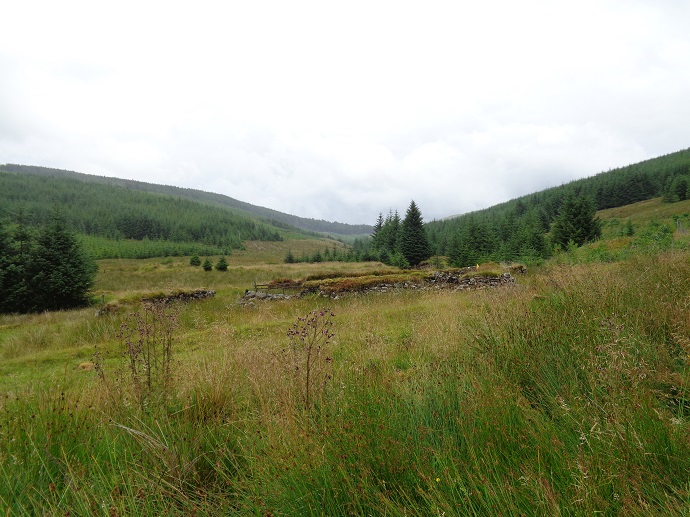 Fank at Tom a' Chromain

But it was all pleasant enough walking, and for a while I even had blue skies overhead - although this was followed by another short fit of rain, just to show that it couldn't be counted on! 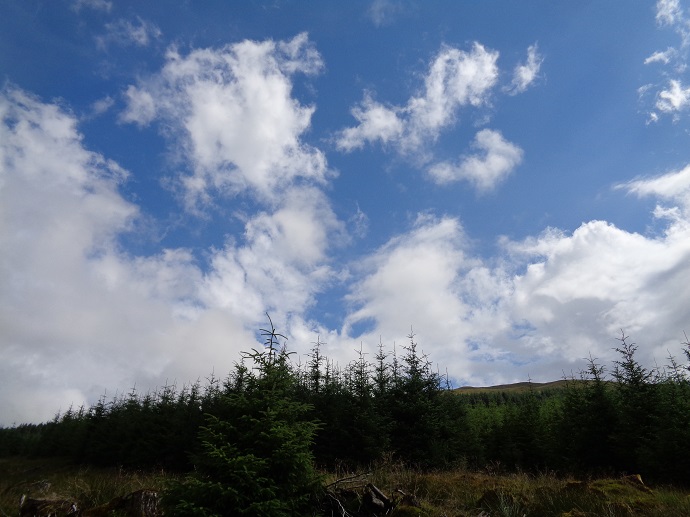 This northern section had become much more of a forest road, running through fully grown trees, although it did open out again. The scenery was slowly changing as I headed north, less the smoother curves of the south, and into something a bit more rugged. Looking back to Creag Tharsuinn

It took me a while to be sure that I was going downhill again, because it was all fairly flat for a long time, and there was a stream running parallel to the path just the same, only the other way round - but before very long the track began to descend much more definitely, and I had real hills in front of me now, starting to resemble the cluster around Arrochar and Glen Croe. 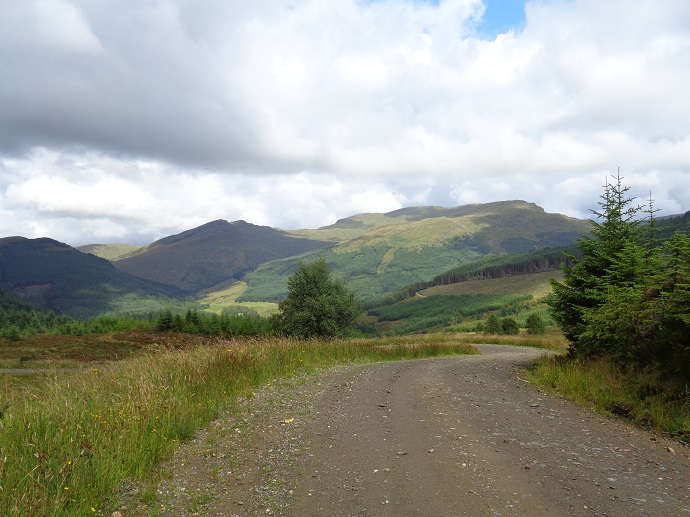 The route as waymarked on the ground doesn't quite follow the route as marked on the map, turning off the current forest road onto a older track filled with what seemed to be grey ghosts of trees, growing in gloom and covered with hanging moss. Further down again it turns off onto a tiny path which drops down to finish high above a burn, which would be crossed on a wooden bridge to a waterfall on the other side, except that it was all closed off with diversion signs. Instead a path kept above the near side of the burn, to come down some steps which were also being repaired, and out onto a good track again. It still seems a long way out after that, past a little cluster of houses and a farm entrance into more open fields, and eventually out to the visitor centre, where all the information was locked up, but at least the toilets were open! I'd got over quicker than I thought I might, and had nearly two hours to wait for the bus, so that I didn't really know what to do with myself - I was quite hungry, and I had plenty of time to walk into Strachur, but if I did that and found the shop shut I might be worse off than I was at Glenbranter with a nice shelter to sit in, and I had walked about 16 miles already. So in the end I just sat down to wait - I had a book and some knitting, and I sat out at the picnic table when the sun shone, and on the bench under the little shelter at the end of the visitor centre when it rained. 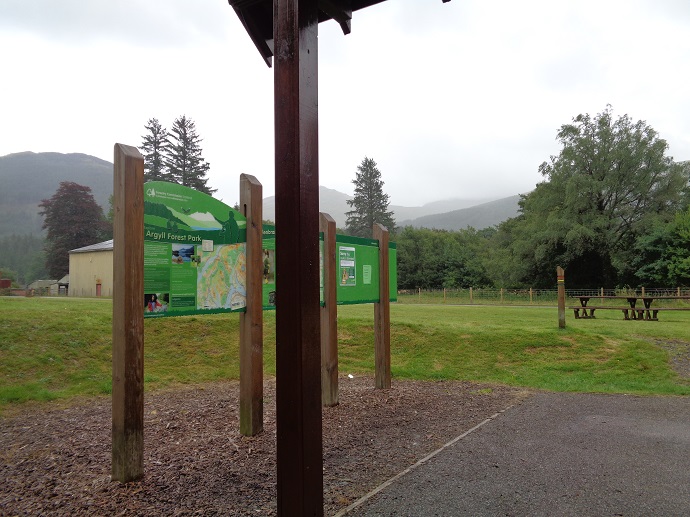 I did have a wander down through Glenbranter village, which is a very unusual one for its setting - obviously built all in one piece to a plan, and obviously built by the Forestry Commission, as it's all made out of wood. When the bus came along it was almost full, but nearly everyone got off at the hall in Strachur to go to what seemed to be a wedding reception, leaving me and a couple of other people to travel a very winding route towards Inveraray, through various places I'd never been before before coming back onto the A83, and getting a very good view of Dunderave Castle on the other side of the loch.

In Inveraray I headed straight to the chip shop, but had to wait much longer than I'd hoped - it might have been because I was so hungry that I got myself into a muddle, thinking I'd missed the bus because the Oban bus, which ran later, had been and gone, even though I really knew that I'd been there at the right time. Fortunately when the bus did come along it stopped for me down along the shore road where I'd wandered off to, although it isn't really meant to - the driver couldn't understand how I thought I'd missed him, but it wasn't until I got back that I worked out that the Campbeltown bus had gone back to being 15 minutes later, and the Oban bus 15 minutes earlier, since the last time I'd been down, which must have been the day before the summer timetable started!

Re: Cowal Way: Glendaruel to Glenbranter