"Oooohhhh......" she mumbled ominously, after I had removed the band-aid on her request. I am at the medical centre in Lochcarron, almost a week after a simple blister popped ( https://www.walkhighlands.co.uk/Forum/viewtopic.php?f=9&t=84278 ) and two days after the by now swollen and infected foot slowed down my pace into a stagger ( https://www.walkhighlands.co.uk/Forum/viewtopic.php?f=9&t=84397 ).
A few minutes later I'm outside, with two weeks worth of 500 mg penicillin 4 times a day. It's about 3 in the afternoon, and I reckon I can make it to the Coire Fionnaraich bothy in time to have dinner before dark, even when in pain. At least I'm on proper treatment now, instead of on Hadex, the latter of which seems to have done more harm than good.
The plan is as follows: make it to the bothy, take the medication like a good boy, sleep at the bothy, foot and weather depending make it to Bealach a Choire Gharbh, and decide there wether I can climb both Maol Chean Dearg and An Ruadh-stac, or only the latter (as it is the most appealing in my view). So from the bealach it would be An Ruadh-stac first, then the decision.
I any case, this would probably be my last walk this holiday, and as I awoke the next morning it was clear the weather was going to be fantastic. I'd been alone in the bothy, and after breakfast, I left anything too bulky or heavy, and set off. Having had An Ruadh-stac on my wishlist for a while and having had my share of adversities this holiday, and knowing this would be my last proper day out, before returning to the Netherlands, I cannot tell you how emotional I got when first reaching the forementioned bealach and seeing An Ruadh-stac in glorious sunshine, not a living soul around. The day was already perfect.
The scramble towards the summit is easy but enjoyable, the views were great, and although I saw many a shower passing by, it remained dry wherever I was. On the summit it was quite cold, with a strong wind, but yet I spent an hour or two gazing in every direction and feeling very much alive and deeply both melancholic and happy.
The way down was torture, both because of my foot and knee, a problem that came as a ghost from the past.
Back in the bothy I was soon joined by a French speaking Belgian woman, a German man, an English man and a Scottish man. We spent an entertaining and interesting evening discussing outdoorgear, politics, generation gaps, whiskey, schoolsystems and what more. I was the first to go to bed, but certainly not because of lack of interest.
I was tired but very, very satisfied.
Here's the pics: 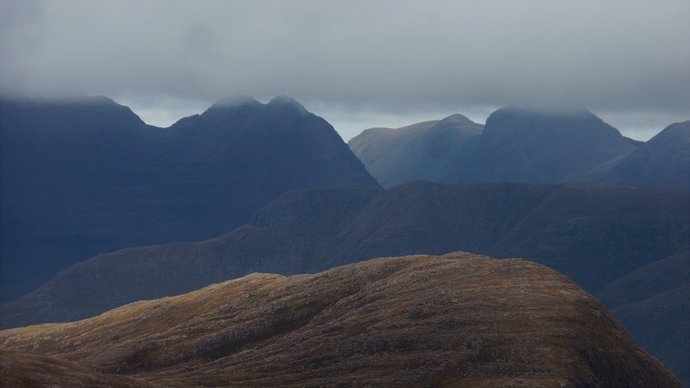 Bye and see you soon.

Stunning hills. I hope to be up among these early next year, once I've recovered from an op.

With Dutch directness: I hope your op isn't anything too serious?

jacob wrote:With Dutch directness: I hope your op isn't anything too serious?

The op was a rotator cuff fix (shoulder) - a very big tear in the ligament caused by slipping on ice (reported on below).

The hassle is that it takes at least a year to fully recover to the extent that one can fully load it again (eg when scrambling). The good thing is that I had the same op on the other shoulder a couple of years ago, done by the same surgeon, and it recovered perfectly.

PS I meant to say in my previous post how brilliantly brooding your pics of the hills are - wonderful.

Perhaps we'll meet on a hill some time...

That sounds awfully painful. Is plain and simple walking with a light rucksack out of the question as well?

I had to look up brooding, but if the dictionary is correct: I love brooding skies. That's part of why I love Scotland. They go well with the rough and deserted (at first glance) landscape.

I'd very much appreciate meeting you on the hills one day. Who knows.

It a great little bothy that. We did the same one winter a few years back, An Ruadh-stac is definitely the superior hill of the two, good choice. The landscape between the two, with its lochans and rock, rock everywhere, is remarkable.

It's one of the best Corbetts north of Inverness IMHO. We might get tempted to visit this area again!

Hopefully the walk to the bothy is not too spoiled by hydro works. Last time we went to that glen (two years ago I think), there was a lot of digging going on. The tracks were supposed to be completely removed after completion of the works, but having seen what had been done in Glen Affric, I'm afraid to ask

Enjoyable read...landscape & weather as ever, takes my breath away,

Thanks Mal, BP and Onsen.

@Mal: it is a great bothy, and as a matter of fact, during the evening the issue of bothies came up as well, with the German guy stating that a system like this would be impossible in Germany. Mainly because it would soon become the victim of graffiti, vandalising and arson. I thought about it and I think the same goes for the Netherlands.
This issue is ofcourse being discussed right now in "general discussion", concerning the Corrour bothy, but still that seems like an incident rather than rule. So for that alone hats of to Scotland. And Wales and (am I allowed to say this here?) England.

@BlackPanther: I am afraid I've got some bad news for you. The road towards the bridge is still a big, gravel road. Once over the bridge though, you'll have left all scars behind.

. Loads of good routes around here! They aren't really that local of course, but I've probably walked in this area more than any other.

I envy you Malky.
And I mean that bloody seriously.