I might have been less active on WH recently, but don't be fooled by this temporary silence - the meowing one is still lurking around

Autumn has arrived with fifty shades of yellow, orange and red. It's usually the most photogenic season (unless weather is c***p) and we love to be out and about with our cameras, catching the beauty of the landscape, enjoying walks in the woods, by the sea and of course venturing up mountains. I have a few stories to share from colourful September days

Our autumn wanders started with Ben Hope. Sunday the 2nd. Kevin was still a bit careful after his injury (though it was mostly healed by then, but better not to tempt the fate), so no big adventures in mind, but a half day stroll up a nice Munro? Why not.
Weather was not fully cooperative. Forecast was nasty everywhere but the very far north, so it was logical to pick something in Caithness/Sutherland area (ahhh my inner mr Spock would be proud! Logic always comes first!). The choice was between Klibreck and Hope, we decided on the latter as the former is a good hill for winter so it can wait till snowfall. We had already climbed both mountains so it would be a repeat regardless.
Our route was the usual way up Ben Hope from Strathmore. Initially, we considered visiting the outlying tops (Sail Romascaig for the views down to An Gorm Choire), but it was so windy that we struggled to walk on higher ground and my inner mr Spock suggested we should use logic and stick to the main path

Track_BEN HOPE 02-09-18.gpx Open full screen  NB: Walkhighlands is not responsible for the accuracy of gpx files in users posts
The car park was busy with people and vehicles, we were neither the fastest nor the slowest. But this mountain is always popular. The previous time we climbed it it was in April 2010 and it was busy, too.
I think the path along the waterfalls has become much more eroded in the last 8 years but considering the number of walkers heading up and down, it's hardly surprising.
When we left Beauly, it was a gloomy morning, but soon we drove out into the sunshine. The far north of Scotland escaped the nasty weather front. The only problem was wind, probably 25-30mph with gusts up to 40. It felt a bit odd combined with the bright blue sky...

We booted up and started up the path, with lovely views behind us from the very start.
Strathmore River: 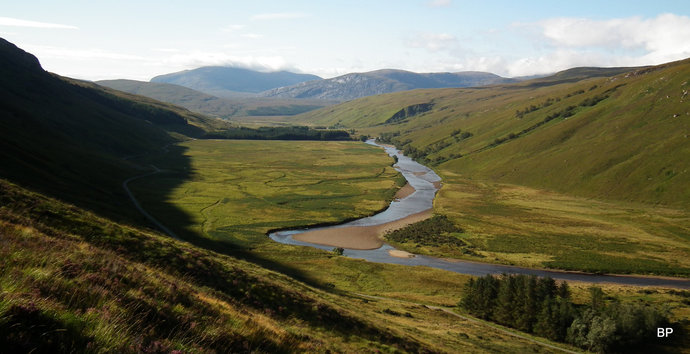 On the eroded path:

Not much to say about the climb itself. It's a steady push up the path, a bit wet here and there, but mostly stony and eroded. Walking was OK as long as we were in the lee of the steep slope, but once on the higher ground, the wind started to annoy us. I used it as an excuse to stop for a few minutes and take some snaps of the surrounding area.
Foinaven emerging on the horizon to the west:

South to the hills around Loch Shin:

Even better view from higher up: Ben Klibreck on the horizon to the south-east and the outlying tops of Ben Hope:

Black Panther keeping a safe distance from the edge of the cliff:

Near the summit, it felt more like swimming than walking

but surprisingly, the wind didn't have a chilly edge. I almost lost my had a few times...

...but the views were worth the effort. Ben Hope, when done on a clear day, is a wonderful viewpoint in all directions. Shame about the wind as it prevented us from taking decent panoramic photos (no way we could keep the camera steady for long enough) but it was a small price to pay for the pleasure of re-visiting the most northern of all Munros.
We hid ourselves in the shelter and grabbed our flask with hot tea! The summit area was busy with walkers, we chatted to some of them, the usual conversation about how many mountains we climbed and what was next to come

When you come to Ben Hope for the first time, you will definitely be mesmerized by how vast this area is, and how scarcely populated. Miles and miles of empty landscape...

...and it was a weird feeling, when we counted the surrounding hills and realized that we have climbed most of them (a few Subs and one pair of Grahams left). One of the most interesting ridges in the far north is Ben Loyal - seen from Ben Hope, it shows its best features: Ben Klibreck and the lower tops:

View west, with Foinaven in the middle of the photo:

Zoom to Foinaven. One to repeat next summer

Hard to believe it's been 8 years since our previous visit, but of course, what is 8 years in the life of a mountain? Hardly a few seconds!
Waterfalls on the way down: We returned the way we came, giving up any ideas for exploring the outer tops. Maybe next time, when it is not so windy. Kevin was doing well and it seems that his injury does not hamper him any more and we can now look forward to more autumn explorations. Hope restored!
..................
My next story will be about another re-visit to the far north, this time involving them bones

This has reminded me I must return to Ben Hope on a clear day. I had absolutely no views when I was up before, completely missed this.

Ben Hope has some outstanding views, you really know you're on one of the most northerly hills on the mainland, nothing much between you and the north pole!

If you go back, the north ridge is a nice alternative way up too, with a little scrambling.

Trying to work out when I did it, but decided its best not to know just how many decades ago it was! Guessing 25 years...

Mal Grey wrote:If you go back, the north ridge is a nice alternative way up too, with a little scrambling.

I really fancy this approach - got my eye on it!

Mal Grey wrote:If you go back, the north ridge is a nice alternative way up too, with a little scrambling.

I really fancy this approach - got my eye on it!

It looks flipping scary, as the "nose" would be extremely exposed and difficult. However, there's an easy enough little scrambly path on the east side a few yards away. Not that obvious if descending this way though, as we found out!

Mal Grey wrote:
It looks flipping scary, as the "nose" would be extremely exposed and difficult. However, there's an easy enough little scrambly path on the east side a few yards away. Not that obvious if descending this way though, as we found out!

Thanks - good to know!

Mal Grey wrote:he north ridge is a nice alternative way up too, with a little scrambling

I was wondering about the northern route since I saw Muriel Gray do it in the Munro Show:
https://www.youtube.com/watch?v=RAjckLPnIpE

(sorry, tried to embed the video straight from YT but for some reason it bounces back with "error occurred" message)

So definitely something to look forward in the following years. Especially that we have next to nothing left unclimbed in the far north