The day was an autumnal Saturday, the place Llanberis pass car park, where the parking places are rarer than unicorn ****, the time O my god its an early 5am. The weather, I think the most descriptive word would be claggy, clouds are about 800m, drizzle, blustery wind, but the weather gods (MWIS) states we should have a short clear spell early morning, so here's hoping.
The target, one on my bucket list for more than a decade, Crib Goch. I have forgotten the number of times I have reached that holy path junction on the Pyg Track, looked up and the pyramid of hell has looked down on me, taunting me, but the conditions have never been right. The one time it was perfect was back on a 3 peaks challenge in 2016, and I had to pass it by.
This time, a total of 4 of us in the group, starting early we saw the sunrise illuminate the cloud base, bathed in a sea of gold, beautiful. Not too much trouble up to that notorious path junction. Looked up, she looked angry. This time, I thought, lets have a go, at least get some experience on the scramble up.
Just over an hour of route finding, slippery, greasy rock, cuts and scrapes, cramps, expletives from above and below.. don't we just love this stuff! Nearing the top, the rock formations were like natural steps, then running out of something to climb, we caught our first glimpse. The quartz band transecting the ridge. I left my buddies behind and took a look from the gently inclining rock plateau before the main traverse. I could hear CG beckoning me on, go on do it! I looked back at the guys then weighed up the risks, the mythical weather window had not arrived, the cloud was being whipped over the ridge, the rock was slippery, the visibility poor. I walked back to the group, thinking about the number of incidents which had occurred before, the helicopters buzzing the ridge, today was not the day, there was a sense of relief amongst the guys. She has been there for millions of years, she will be here next year. We reversed the route, quite challenging down-climbing, good practice for all. Met up with a number of groups making their ascent, quite a few experienced guys, some less so, asked our opinion, I told them my thought process and our decision. They could come to their own conclusion when looking down the barrel.
Time for some drone footage as the rain eased further down. We re-joined the Pyg Track and made the well trodden ascent up to Snowdon. Sausage roll and a hot drink in the absolutely rammed cafe then we made a short descent to the Watkins path. I thought about the tragedy which befell the scout group attempting to join up with the Watkins path by going directly east from the summit, off track in 1999. How important it is to have basic navigation skills, taking a bearing from the summit in cloud and keeping your group together. I love taking my daughter into the hills, and luckily she puts up with me and wants to do more and more, I am the lucky one!
Anyway, we are all enjoying our mountain day, the drizzle does not dampen spirits, a clear mind, just focus on the path ahead and the friendly banter. Now the scramble up to Y Lliwedd, done it before, first time for the guys, never gets tedious lots of ways to ascend, great scrambley sections, vertiginous drops on the North face. Photos on the summit, everyone pleased with themselves, still some hot tea left in the flask and downed the remaining snowdon summit flapjack.
Started our descent down to the miners track, more drone footage of our entire route, the dark foreboding Cwn Dyli, Crib Goch still shrouded in cloud, the odd break revealing people tottering along the dark teeth. No regrets on our part we made the right decision. Back to the car, all satisfied with another long day out on the hills, back to normality soon, but not just yet, the pub in Betws-y-coed is where we are bound, a time to talk and laugh and of course plan the next, the Lakes? Peaks? Highlands? back to Snowdonia? The hills of the UK, nothing better.. 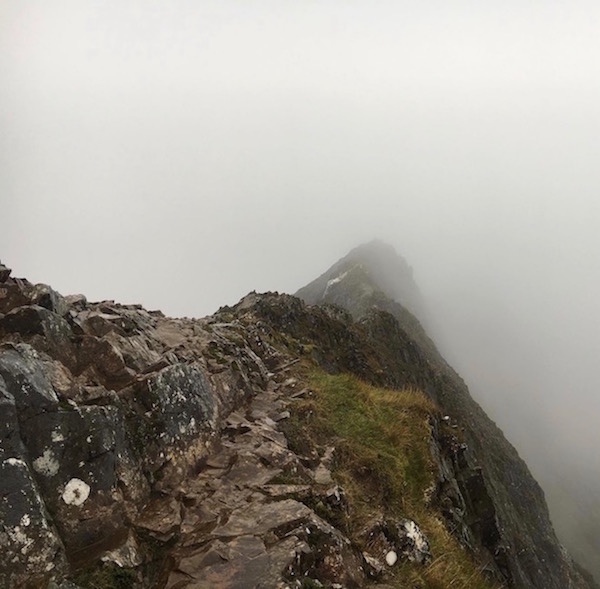 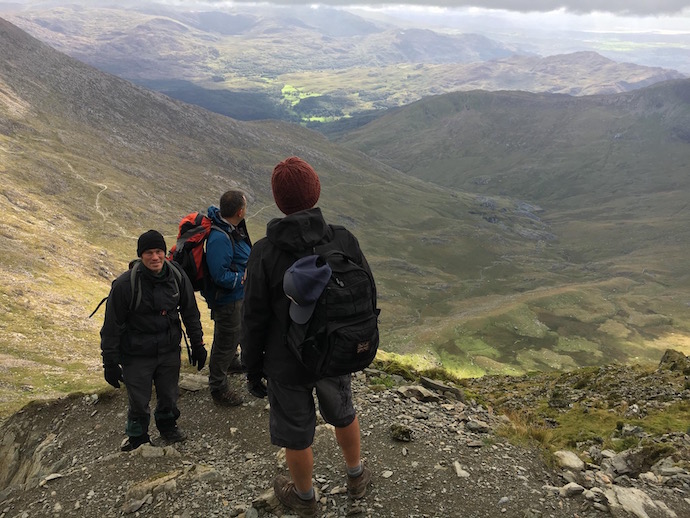 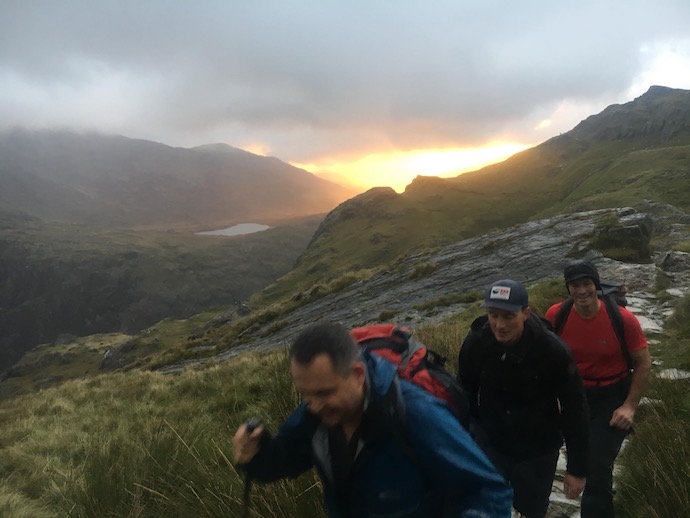 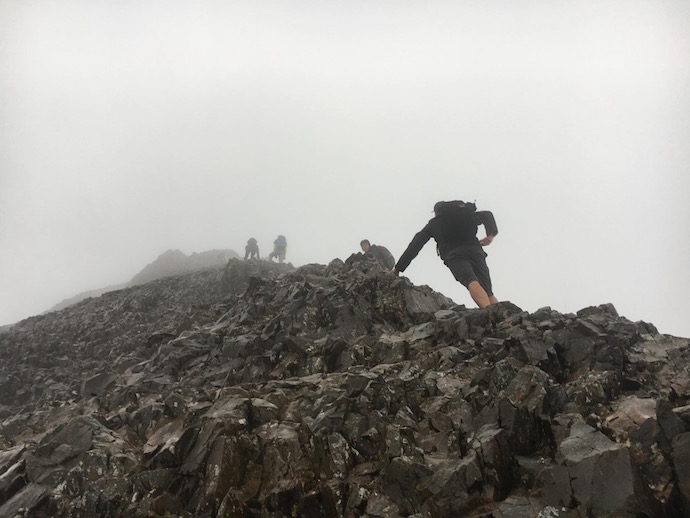 Very well described decision process, and the correct decision is the one that's right for you at the time. So good stuff, too many doubts at the start isn't a great way to proceed - save the doubts for when you're halfway along!

Besides, the ridge and views from it are so fine that decent visibility is worth having too.

Hope you are able to get back and do it soon, it certainly is worth waiting for!

Well, hope you get it next time. Wales is too wet for its own good sometimes. This time was most probably not it. Some nice photos nonetheless.

Helicopters don't half concentrate the mind. We met an instructor who stepped out of one on an adjacent hill. They train round there, constantly. 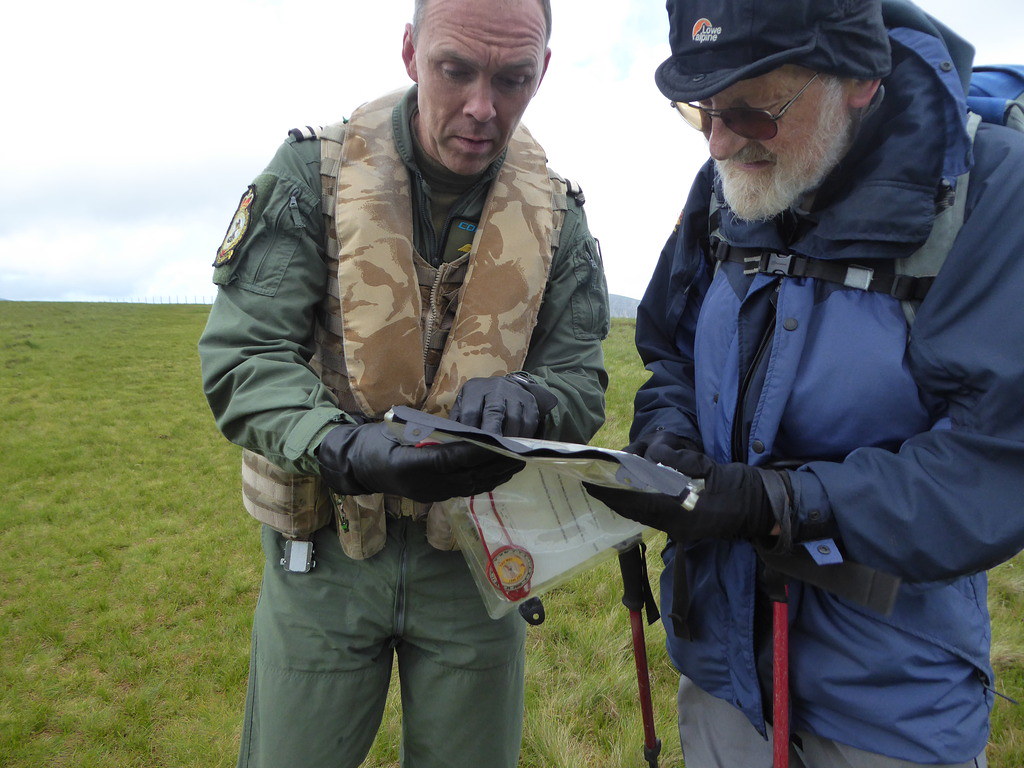 We should probably NOT have done Grib Goch when we did it with an ex colleague of husband. His wife kept saying "Darling, the doctor said....." and he kept saying "Pooh to the doctor." So we did it on a perfect day. The next day we discovered what the doctor had said, namely he needed a triple heart bypass. We were furious.

Excellent description. Its never the wrong decision to turn around and amend your plans, and you still had a great day by the sounds of it.

Definitely the right decision. Crib Goch is amazing on a calm, clear day. But if conditions aren't perfect, then always best to go for the other routes.

I've seen the "Crib Goch helicopter" lifting people to safety so many times...