The final day of my Highlands tour of 2011 saw me struggle out of bed at the Loch Ossian Youth Hostel and attempt a simple breakfast of croissant(s). Friday had been quite a brutal day, with the long walk in to Creag Ghuanach followed by a "sporting ascent" that could easily have been my very last ascent.

The owner-who-might-actually-have-been-a-guest greeted me. He still seemed rather confused that I had travelled all this way just to climb a Graham, but I explained that my original plan was to traverse Leum Uilleim, Beinn na Clochie and Glas Bheinn before heading down to Kinlochleven. We agreed that with the deer stalking in full swing, the only correct procedure would be to stick to the main ridges on Leum Uilleim. Activate Plan B. 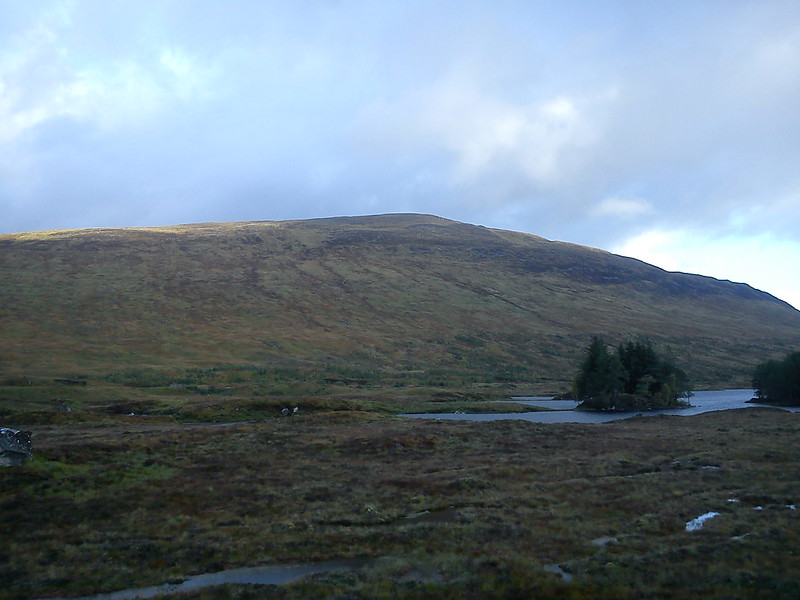 Were it not for Corrour Station, Beinn na Lap would be one of the most inaccessible Munros, but instead it is one of the most straightforward. This was exactly what I needed after yesterday (not to mention the Brodick-Lochranza walk on Monday). 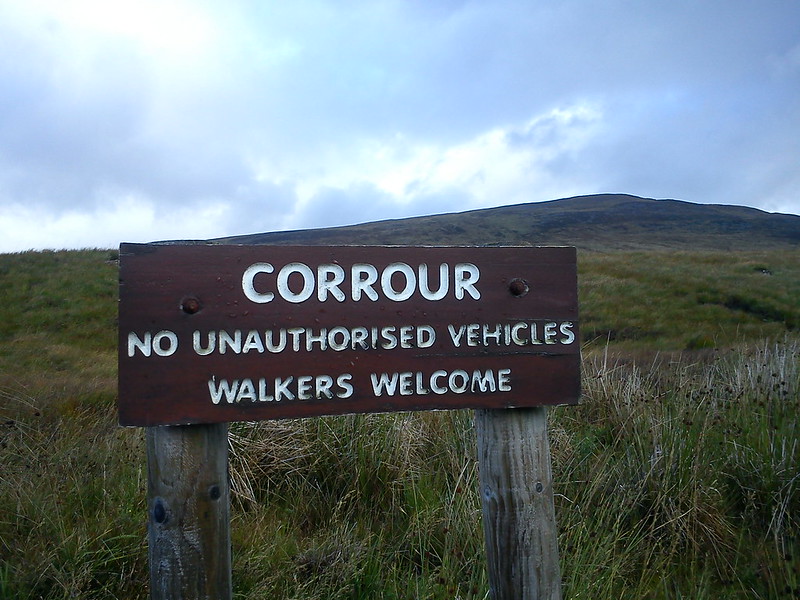 I headed down the track towards the station then turned right onto the Road To The Isles. At a T-junction I headed off the tracks, straight ahead where a boggy path started to lead up to the hill. When I say boggy, I mean very, very, very boggy...... 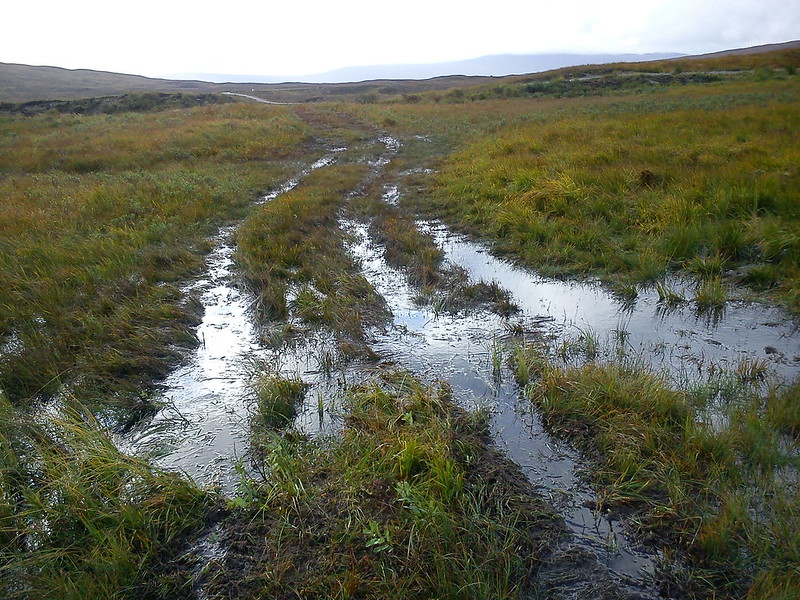 The 'puddle' was in fact an enormous swamp. I was now submerged in knee-high mud, similar to the Vicar of Dibley situation. I emerged slowly but surely, relieved that no-one had seen my faux pas. 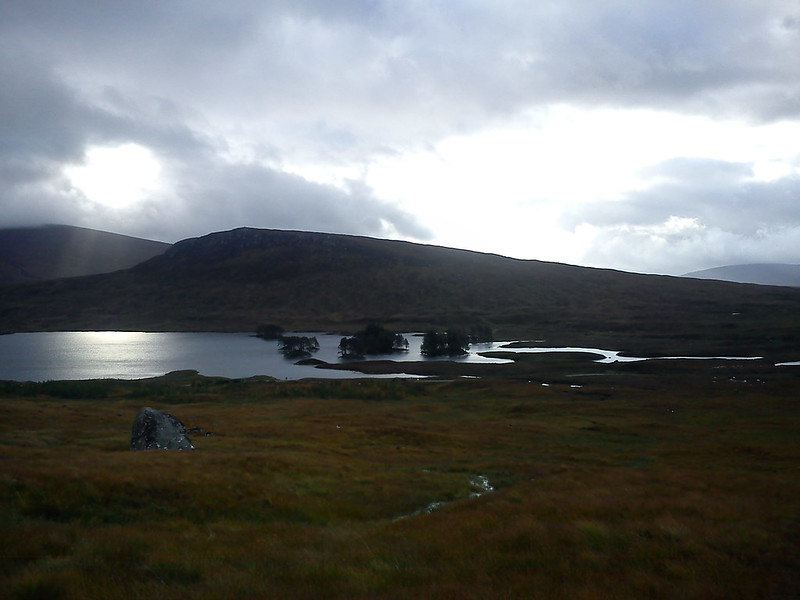 Had the path not improved from the quagmire that lay at the first hurdle, I may have had to turn back. Thankfully, the hidden swamp was a one-off, and the path led up onto the ridge towards the summit of Beinn na Lap. 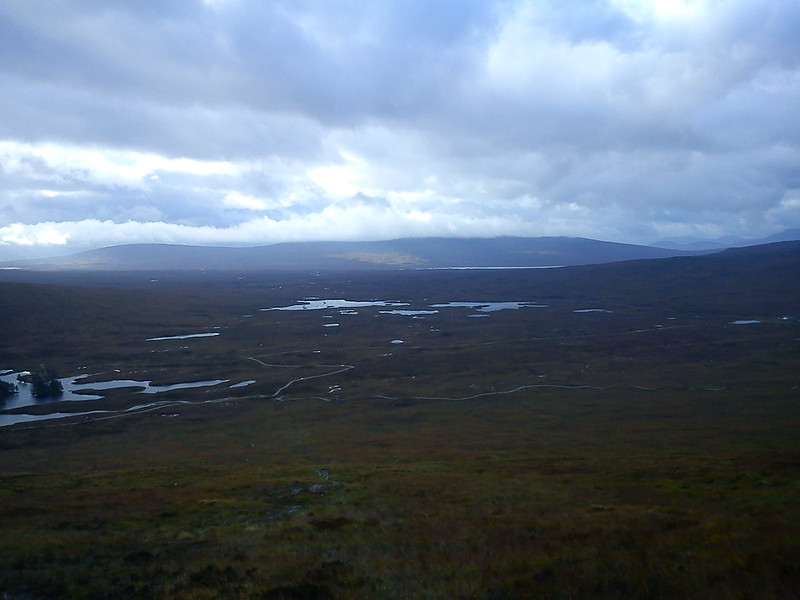 Road To The Isles with Rannoch Moor looming to the South 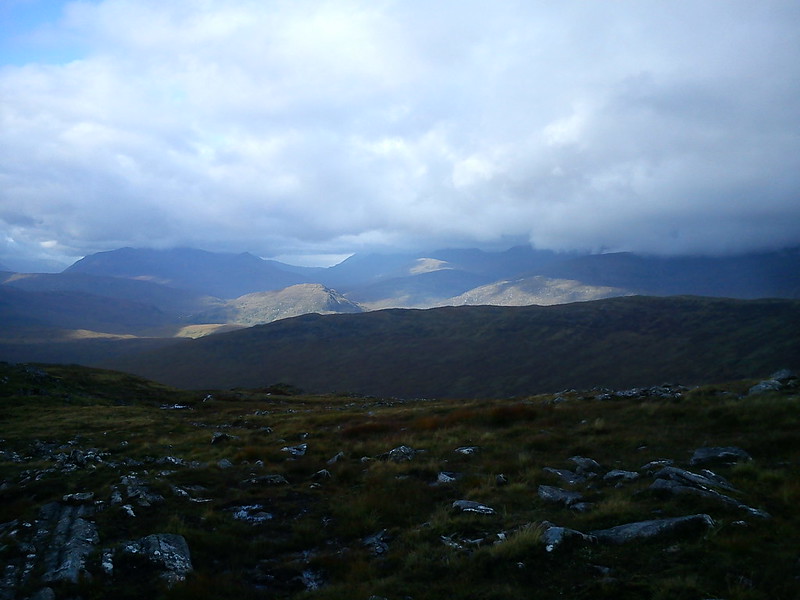 Creag Ghuanach appeared over to the West, bathed in sunshine. Unlike yesterday...... 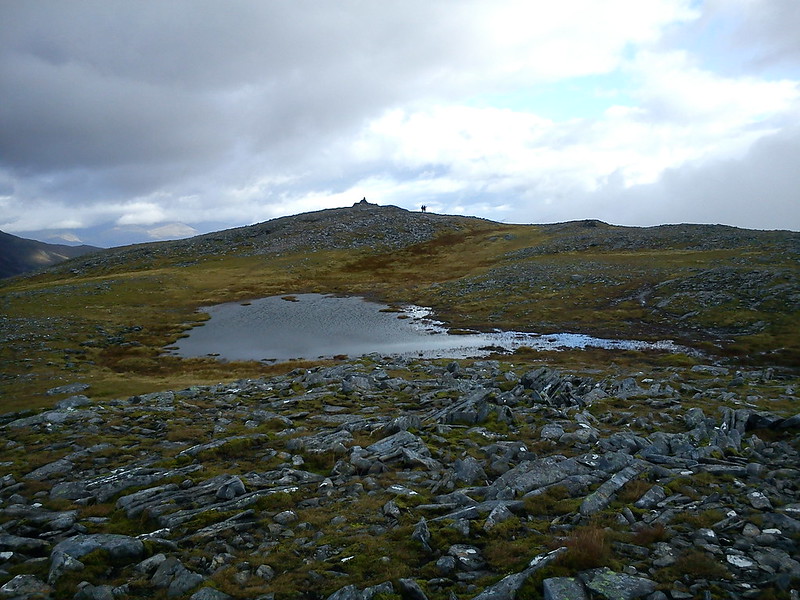 The summit cairn appeared behind the lochan, surrounded a group of walkers who appeared to have side-stepped the Vicar of Dibley quagmire. 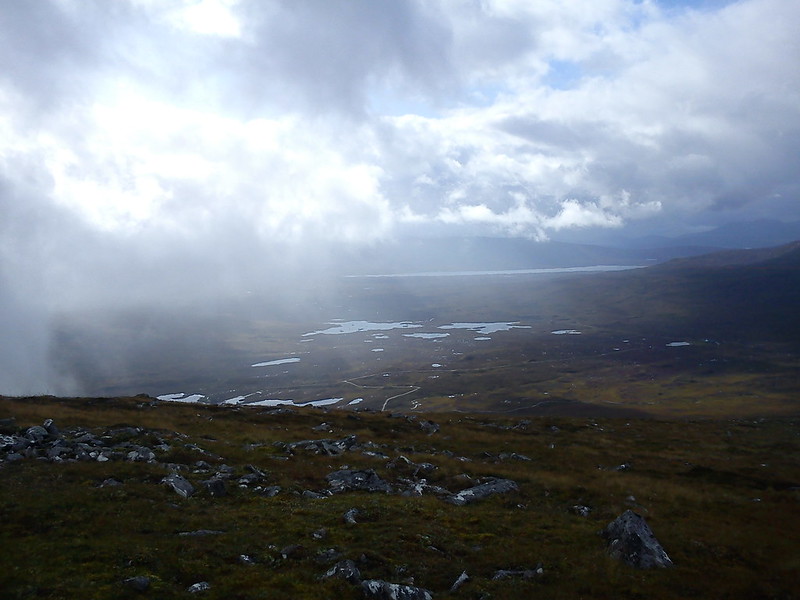 Just after reaching the summit, cloud enveloped the hill. It quickly cleared though, to leave cracking views towards the week's final objective, Leum Uilleim. 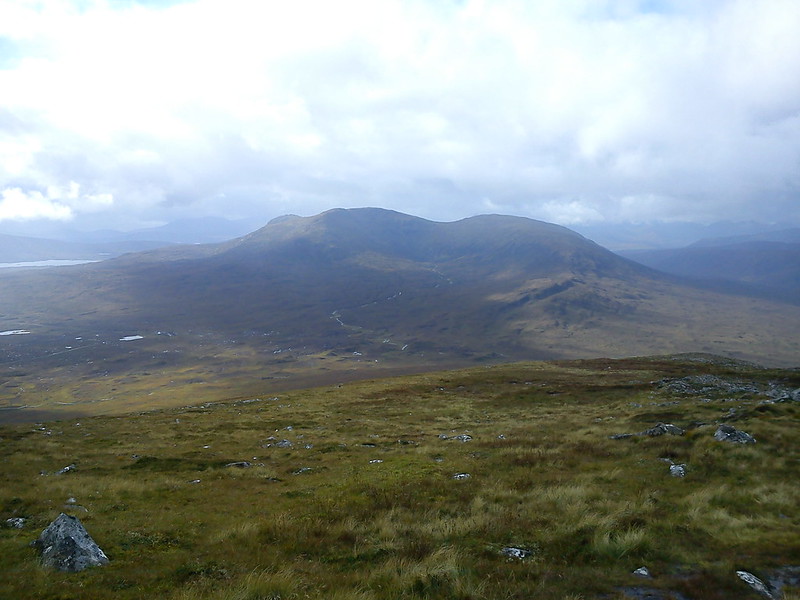 Soon afterwards (and after deftly avoiding the quagmire!), I was back on the track towards Corrour Station, where a unique experience awaited me: a hot lunch mid-hillwalk! 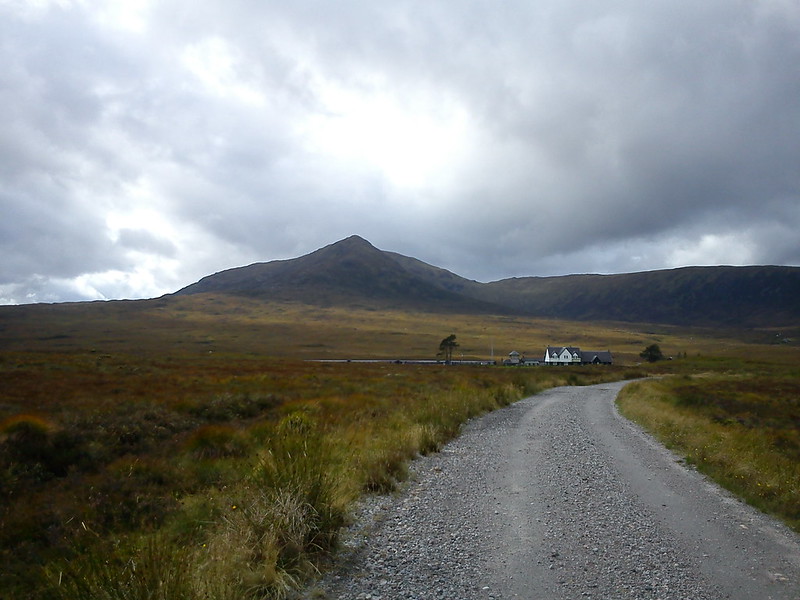 It was a well-received lunch, and surprisingly cheap given that there is literally no competition for about 15 miles in all directions. Afterwards I headed across the railway and through the gate towards 'The Trainspotting Hill', Leum Uilleim. 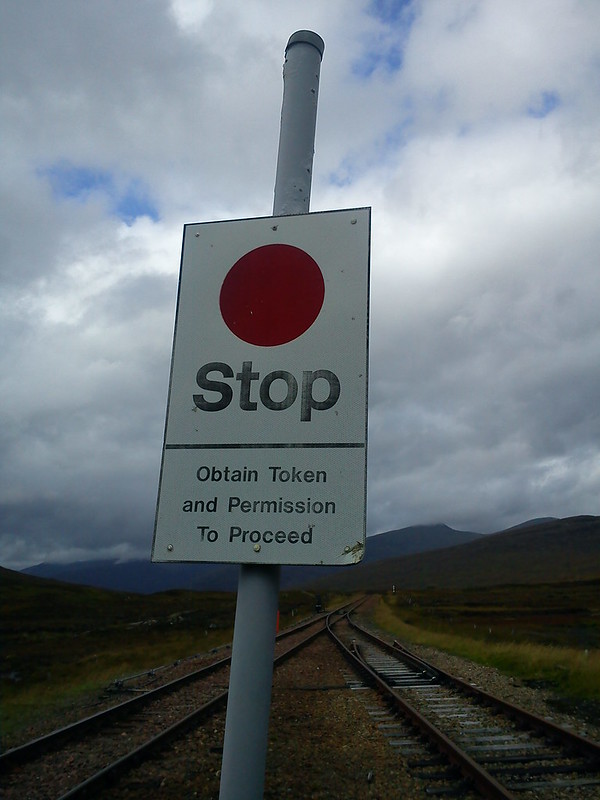 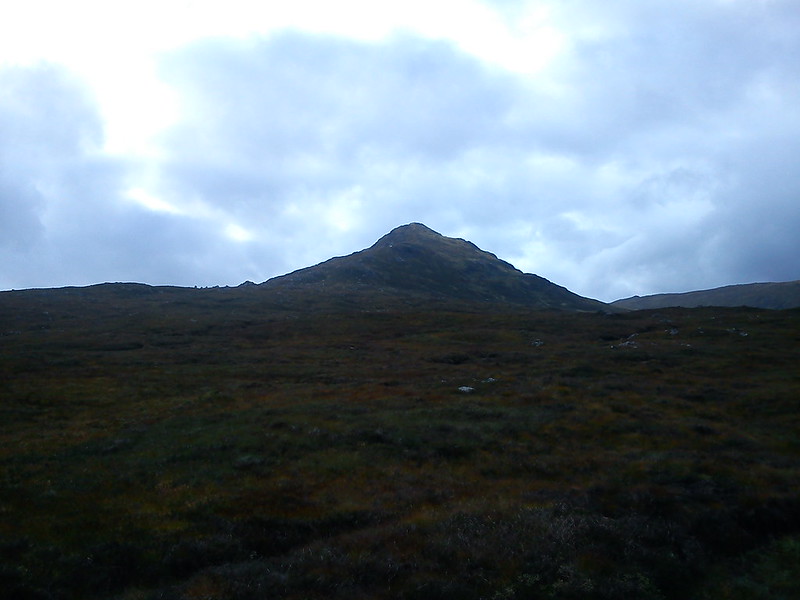 The Eastern ridge of Leum Uilleim looked steep from this angle, but with Corrour Station providing a 400m head-start, it didn't feel too daunting. 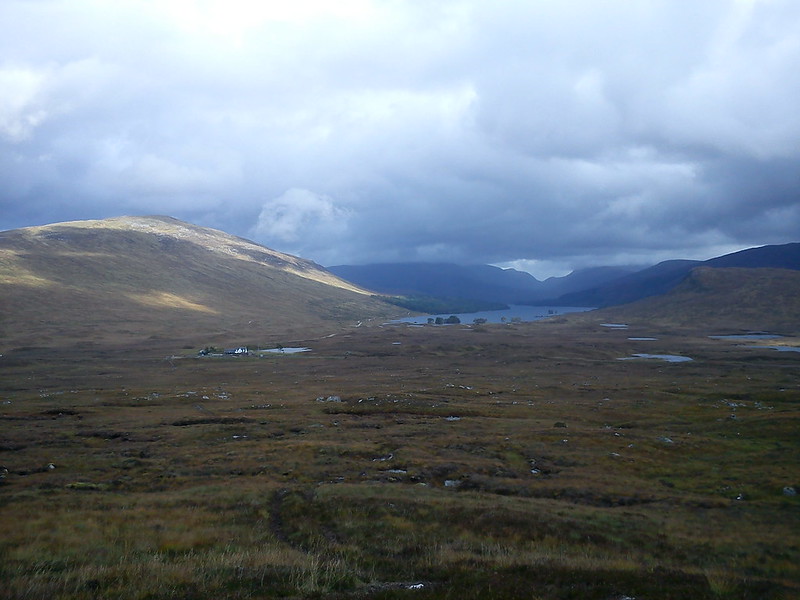 It ended up being a very enjoyable route. My legs were absolutely aching by today, but I seem to remember some very mild scrambling (?) which helped take some pressure off in that respect. 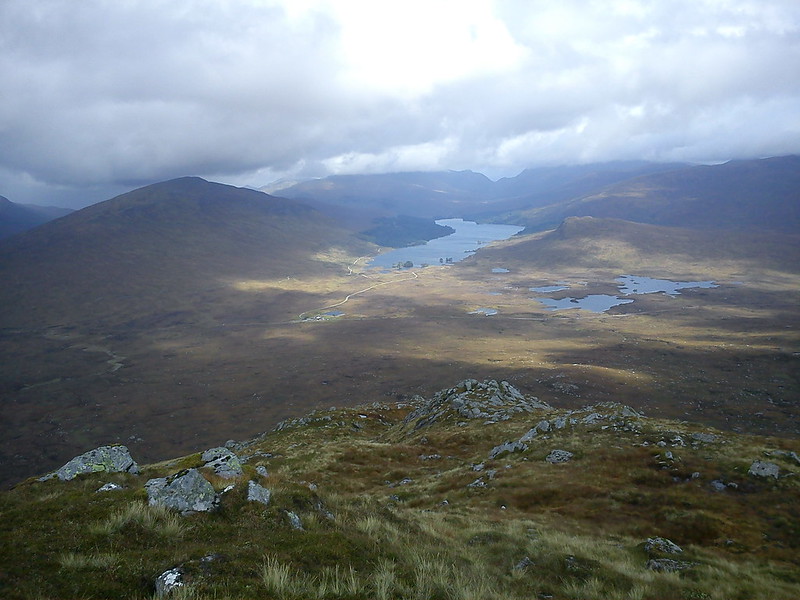 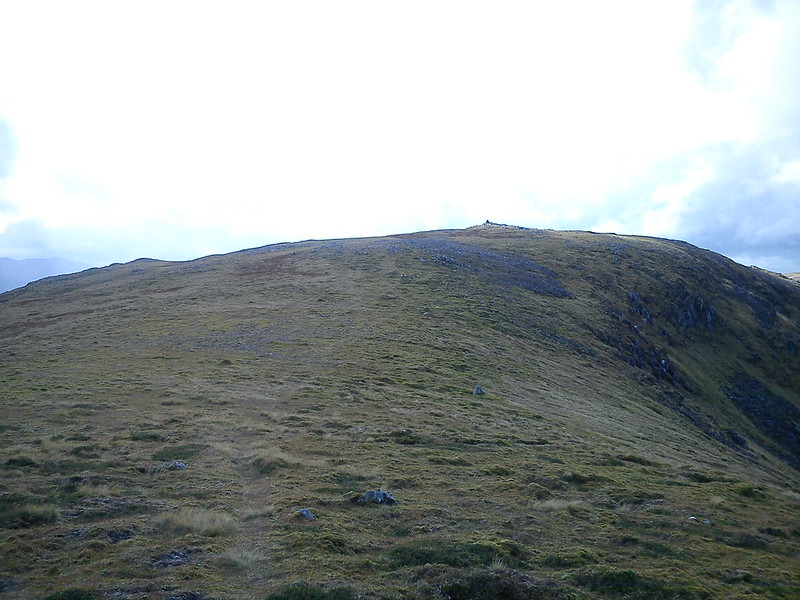 The rocky ridge gave way to a gentle final climb towards the summit. 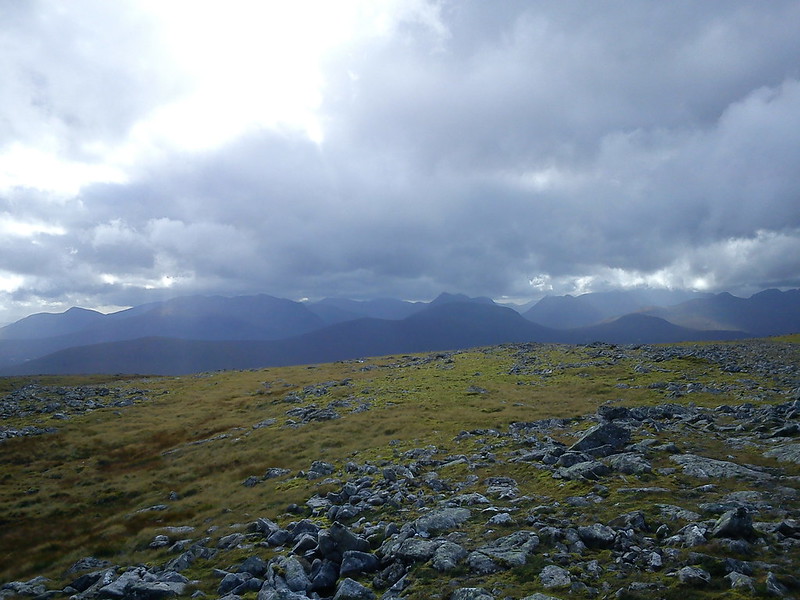 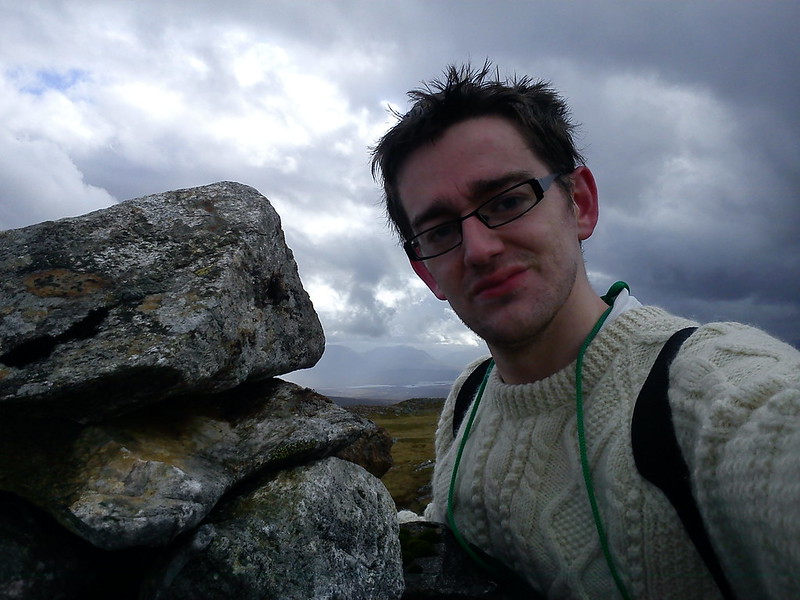 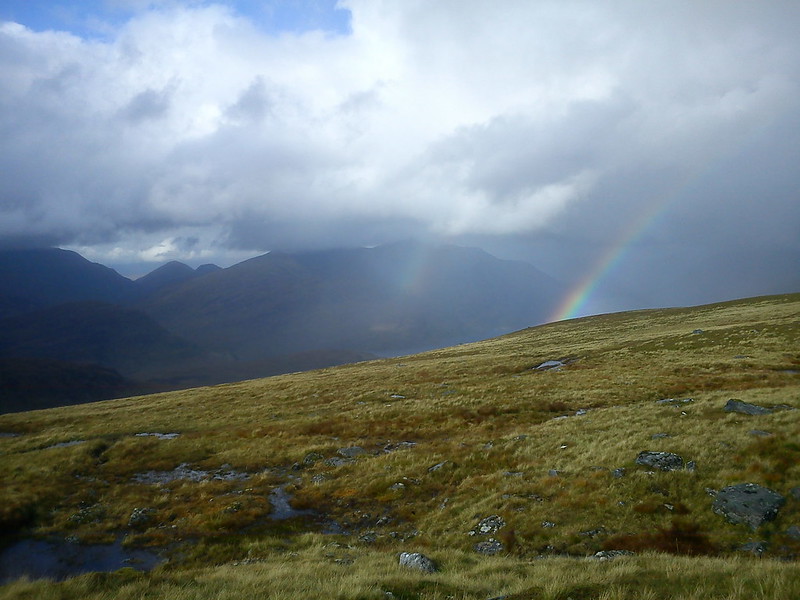 A faint double-rainbow appeared behind the hills as I reached the final summit of the week.

With some time left before the evening train back to Glasgow, I dropped down to the North and picked up the track that leads over Tom an Eoin and An Diollaid towards Corrour. The rain held off and the views for this final descent were tremendous. An amazing way to end the week. 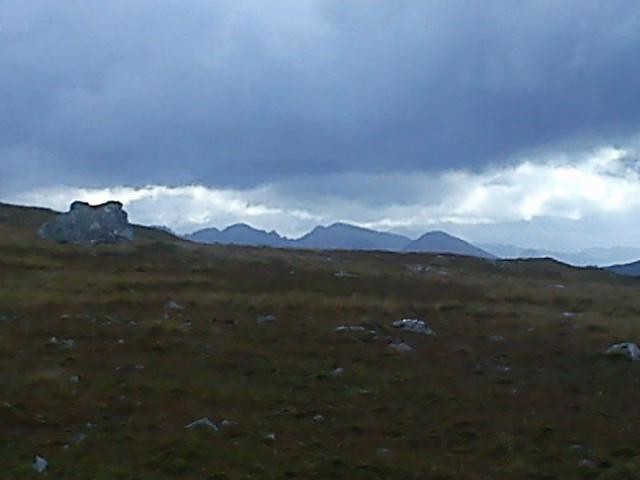 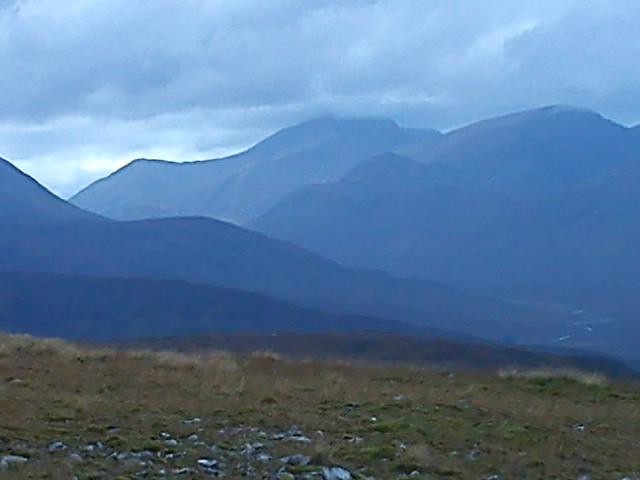 'The Ben' still shrouded in cloud 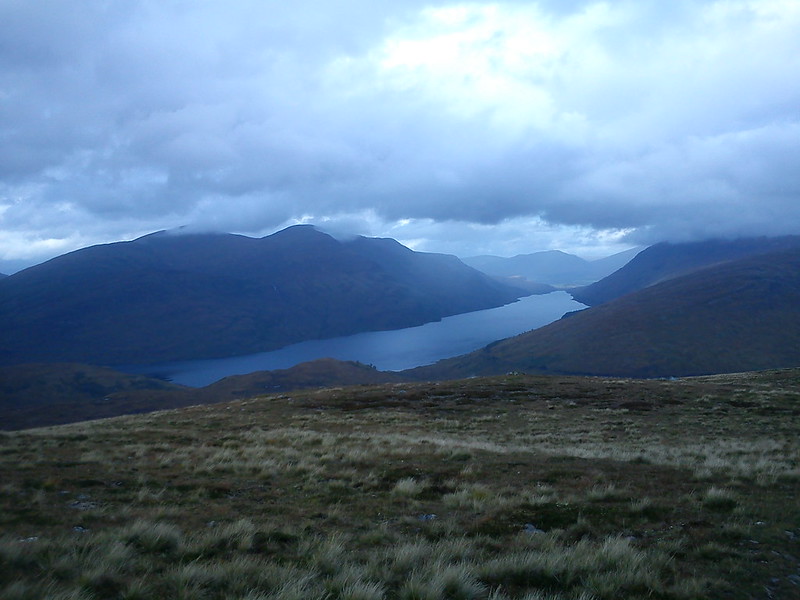 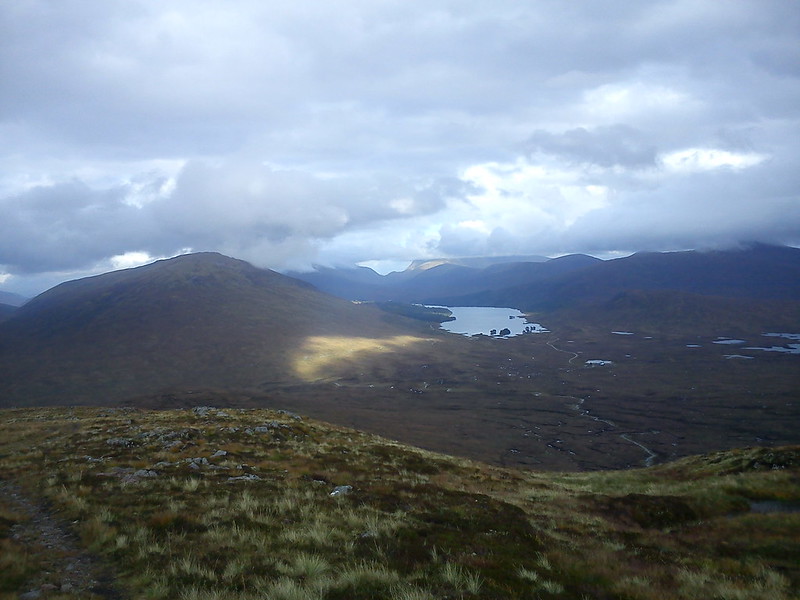 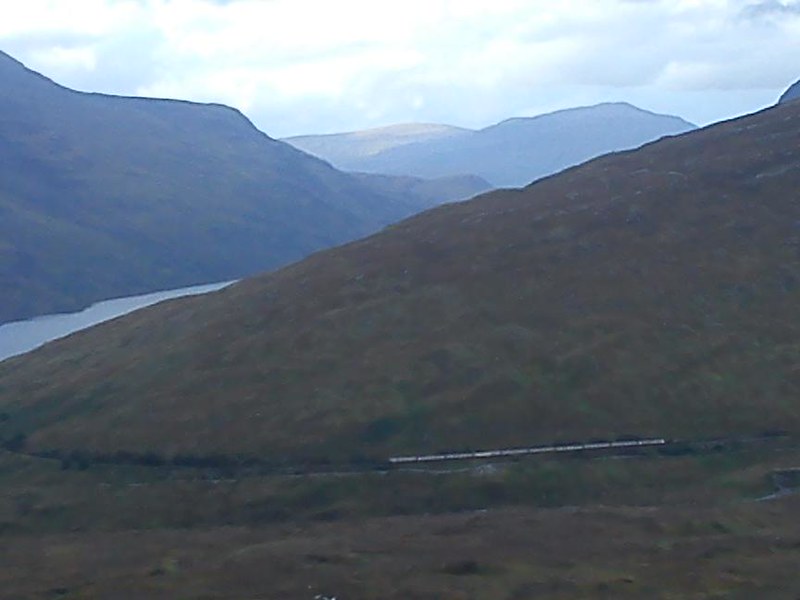 A freight train slowly climbed the hill from Tulloch towards Corrour 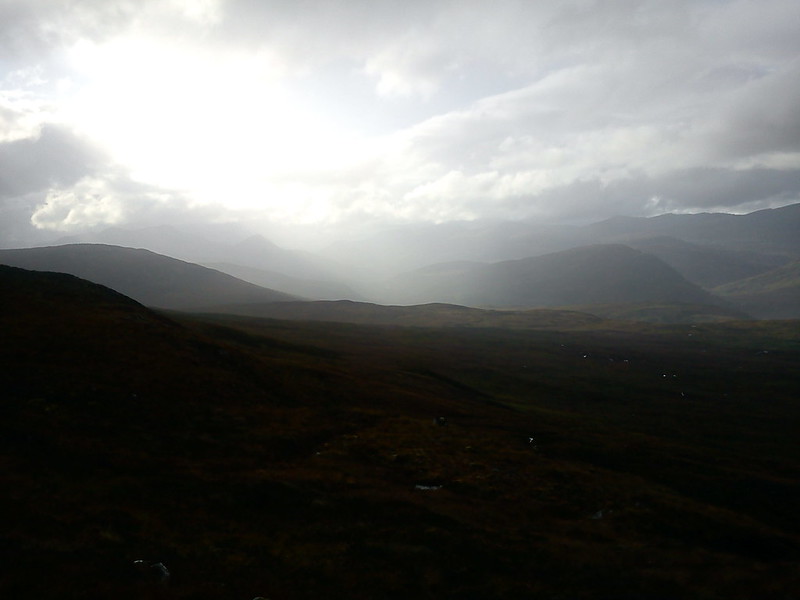 A blast of sunshine in front of Creag Ghuanach 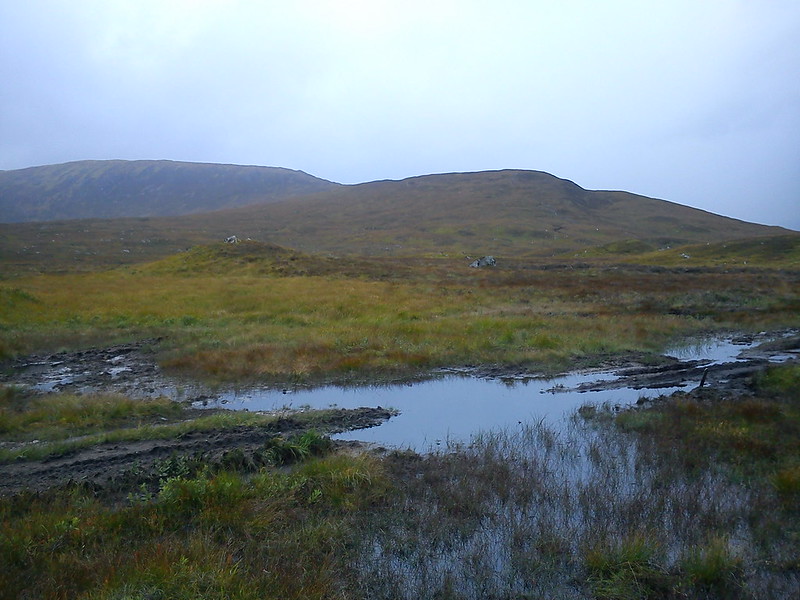 No way I'm going near that. Not after this morning... 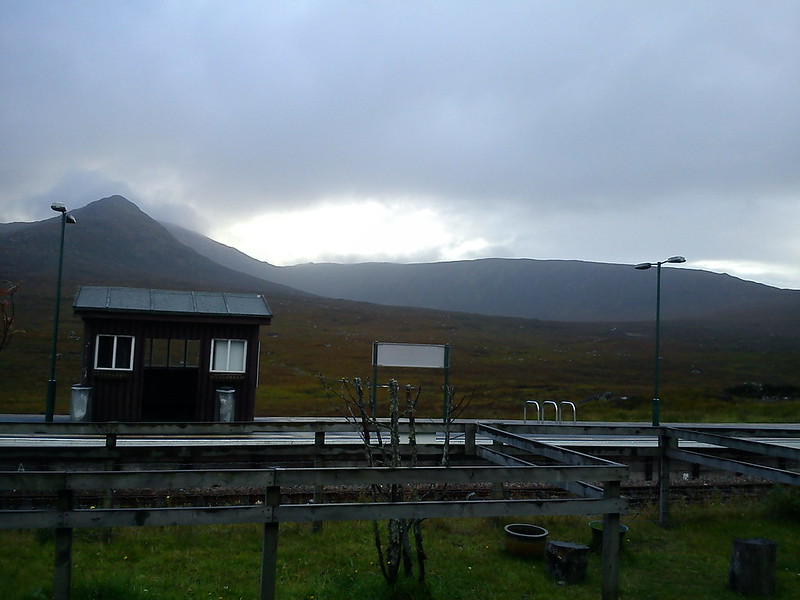 Just after boarding the train, the most incredible rainbow revealed itself behind Meall na Lice. It was quite a sight, and again made me feel so lucky to be living in a country with this much natural beauty. 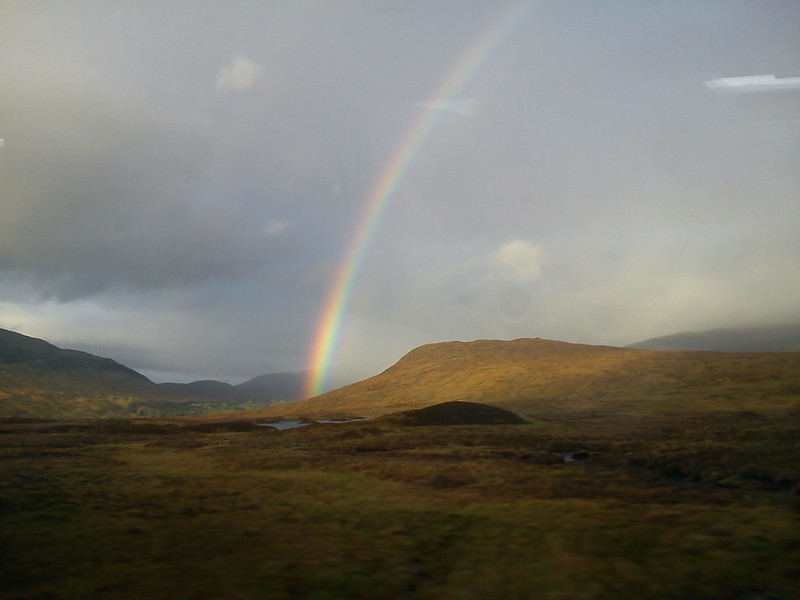 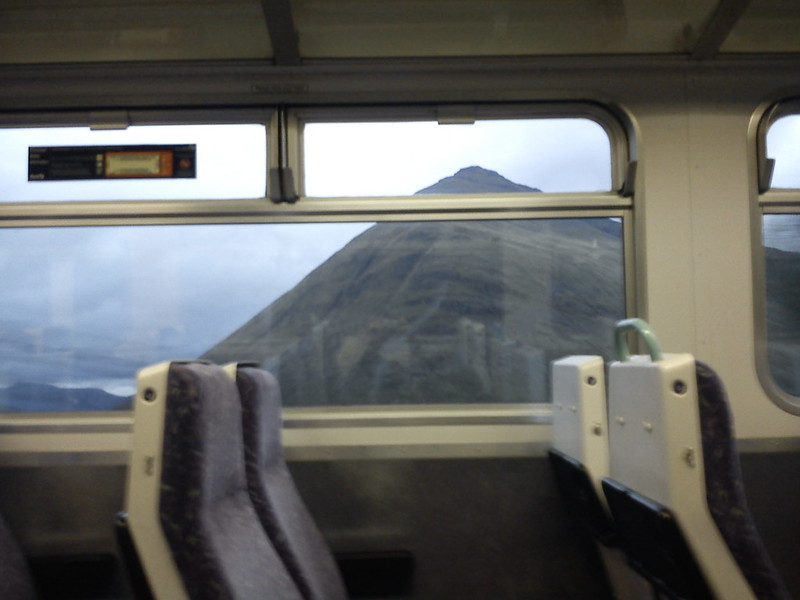 The train passed Beinn Dorain then wound along the Northern (and bonnie) banks of Loch Lomond. As I passed Cruach Tairbeirt I thought back to Wednesday, when I had the wettest day of my life trying to find a Marilyn summit. I also thought back to the previous day, when I unintentionally found myself clambering up a rock face in the middle of nowhere near Loch Treig. At the same time I remembered Monday's 19-mile walk over the Arran Corbetts, and how tricky that could have been if the rain hadn't lifted. If anything the simplest of the lot (aside from the quagmire) was probably Beinn na Lap, the only Munro of the week!

SInce then I have gradually started to focus more on Munros, but it just goes to show that Scotland doesn't begin or end at 914.4m. There's a whole country out there with magical memories in store. As I headed to bed that night (and started an endess chain of dreams about sinking into swamps), I just hoped that I get the chance to experience more days and weeks like this one... 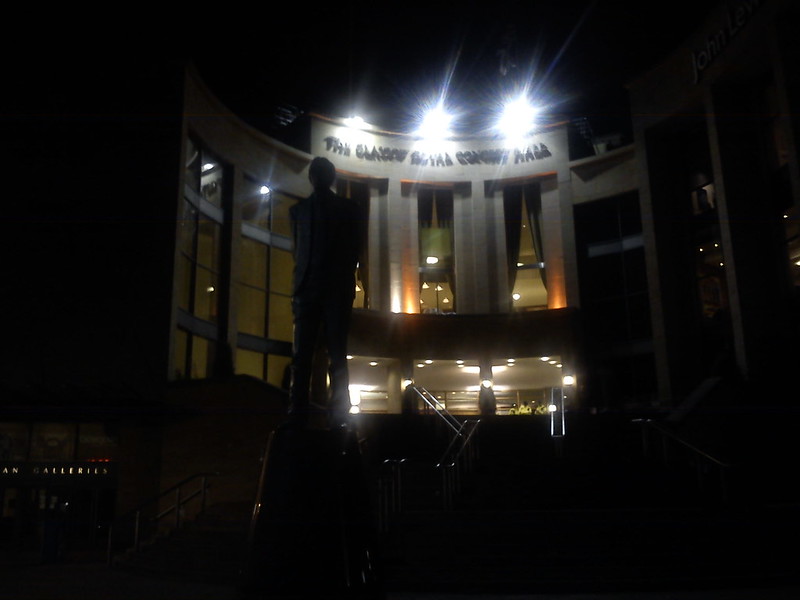 I - Cir Mhor & Caisteal Abhail - The Castles, The Comb and The Frog
https://www.walkhighlands.co.uk/Forum/viewtopic.php?f=9&t=18071