44 people think this report is great. Register or Login free to be able to rate and comment on reports (as well as access 1:25000 mapping).


On 6 October 2018 I completed a task I set myself three years ago, climb one mountain 100 times. Being a sensible chap (although this point is debatable – what sensible person climbs the same mountain 100 times), I picked a small one, Ben A’an in The Trossachs. Last year I had set myself the objective of climbing Ben A’an my age but had to give up at 51 after an accident on the mountain (see later). 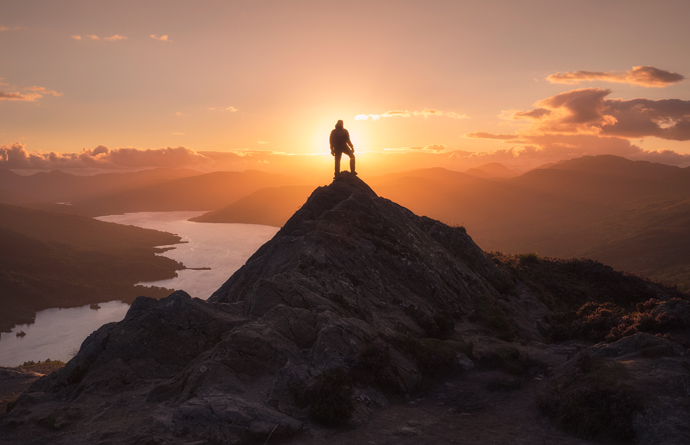 Why Ben A’an? Well its close, only 15 minutes drive away, and it’s not particularly high. It takes a fit person about 60 minutes to get to the top. It’s also one of the best viewpoints in Scotland with almost 360 degree views, west to the mountains of the Arrochar Alps and Ben Lomond, north to Ben More and the Cruach Ardrain, west to Ben Ledi, Stirling and Edinburgh in the far distance, south to Ben Venue (the mountain of the goblins) with Loch Katrine spread out below. At 10:30am every morning you can watch the steamship Sir Walter Scott departing Katrine Pier down below and cruising on the loch, with the ripples of its wake creating fascinating patterns. For a landscape photographer – what’s not to like? 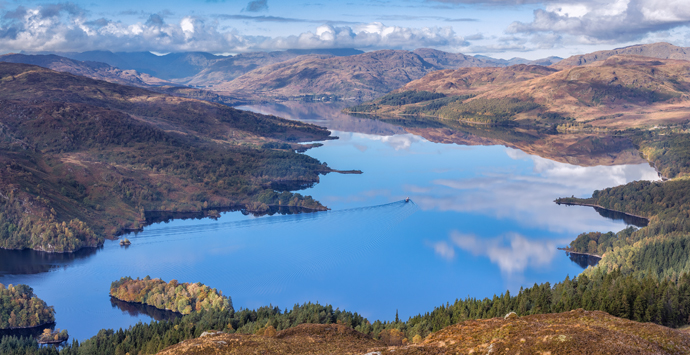 But, and there is always a but, anyone who had climbed Ben A’an will tell you it’s incredibly steep in places. It always amuses me when I read several Facebook and other social media posts by those who say it’s easy. Mountains, even small ones, are never easy. Each is a challenge for someone.

The struggle to climb Ben A’an begins as you step out of your car and are immediately faced with a steep lung bursting climb. There is no ‘ease yourself into it gradually’ like many of the Glencoe Munros or even Ben Nevis. You will likely be puffing after 200 metres unless you are very fit. 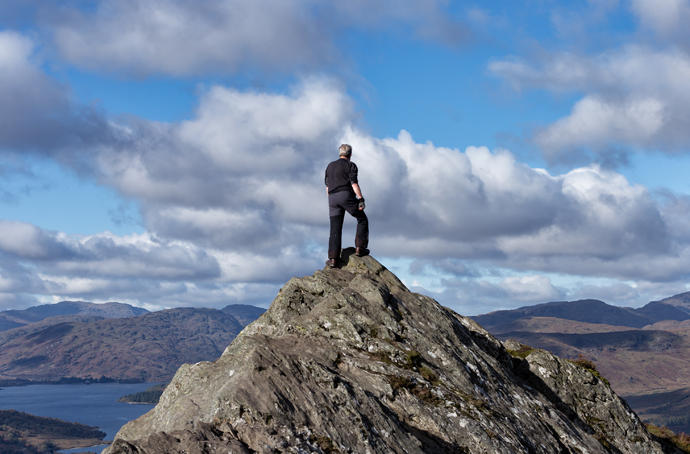 Ben A’an is known as the ‘mountain in miniature’. In total I have climbed 45,400 metres of it, nearly 150,000 feet. If Mount Everest is 8848 metres, then by climbing Ben A’an 100 times I’ve climbed over 5 times the height of Everest on this small hill. I would love to climb Everest, but at my age that dream seems out of reach. 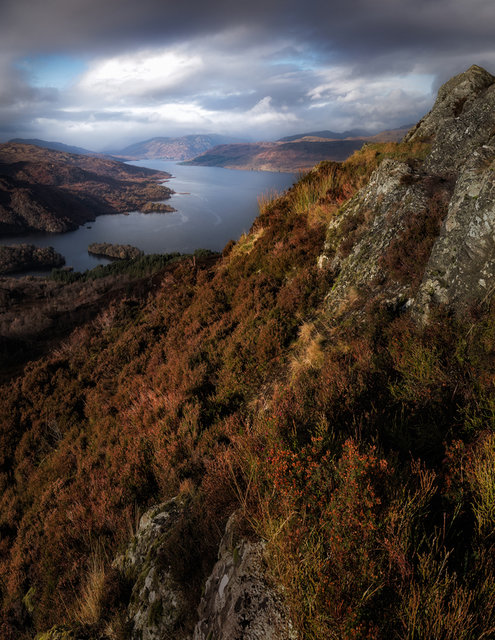 I have climbed Ben A’an in 38 minutes and arrived (collapsed) at the top in a sweating mess or taken a leisurely two hours to climb it while guiding my wife and her girlfriends on their first hill climb. I once met a young guy who ran up and down the mountain twice in the time I took to climb up and down once. I seriously gave thought to tripping him up as he ran down the steep rocks for the second time. But he was a really nice guy who stopped to swap stories. I hated him (kidding). 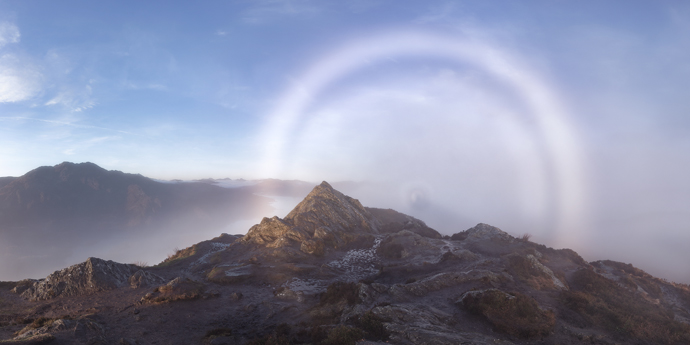 I’ve taken my brother’s six year old grandson up (kids seem to have springs in their legs). I’ve wild camped on top in a winter storm where the tent got covered in snow or watched spectacular sunrises and sunsets from the summit. I’ve been soaked to the skin in driving rain and been sunburned in 30 degree temperatures. I’ve seen a perfect ‘fog bow’ wreath the summit as sunrise struck the mountain top in mid-winter with my Brocken Spectre (mountain spectre) projected into the middle. I’ve watched eagles and ospreys swoop round the mountain top. Each experience was unique and different, some bad, most good, many excellent. One of my photos from the summit even reached the finals of Mountain Photo of the Year. It didn’t win - but to be honest there were better photos (I didn’t even vote for my own photo). 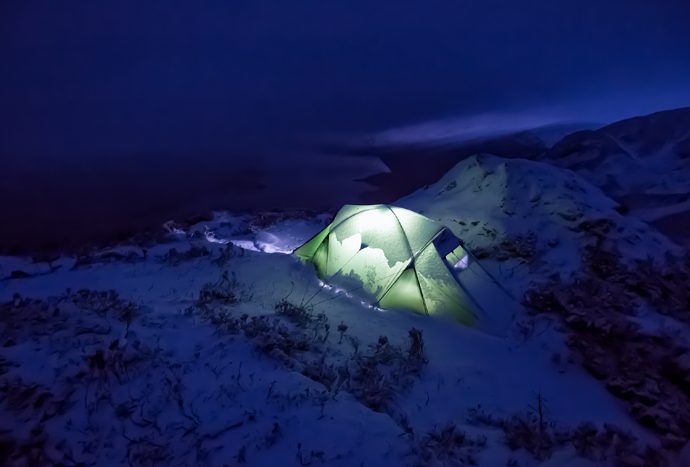 I’ve met hundreds, even thousands, of people on the mountain, all very friendly, always willing to say hello, many to exchange stories and (usually) complain about how steep the climb was. I’ve met a 50-member choir all the way from Holland who sang hymns on the top, 200 members of a Mosque from Glasgow on a charity climb, including women in full Burqa (it’s a great solution for the problem of the Scottish midge when you think of it – and you are now definitely thinking about it). Saw a family trying to push a pram up the near vertical rock steps (strange) and a guy climbing it in stiletto heels for a bet (weird – they didn’t match the rest of his outfit – white stilettos with camouflage trousers, for goodness sake, some people have no taste or coordination). All stories to be filed away and recounted with pleasure and occasional amusement. 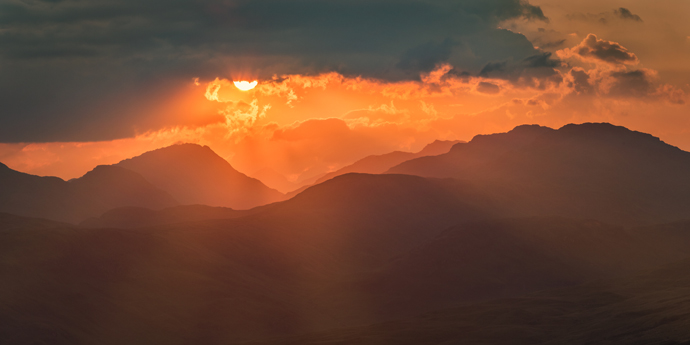 Sunset over the Arrochar Alps

I fell 100 feet down the mountain, with my knee which should bend backwards bending forwards, rupturing my medial and cruciate ligaments along with various other cracked and damaged bits and bobs. My own stupid fault, I was paying attention to getting the photograph and not where I was standing. I patched myself up and managed to limp off. The upside was I protected my camera equipment which survived undamaged – always look on the bright side. In July this year, one week after knee surgery I climbed it for the 97th time. For me Ben A’an is not a ‘glass half full’, it’s a glass overflowing.

I climb mountains for photography not to ‘collect them’ or tick them off a list. I have enormous respect and admiration for Munro Baggers, those dedicated and hardy people who climb the mountains in Scotland over 3000 feet, all 282 of them, but it’s not my thing. Some mountains I’ve climbed several times, some dozens, but always for photography. I’ve climbed several hundred Munros and Corbetts, but frequently the same ones. About 80 of my Munros are on Buachaille Etive Mor and Buachaille Etive Beag alone, always looking for that exceptional photo which stands out from all others.

Scotland’s finest mountain (IMHO – why can’t youngsters simply say ‘in my humble opinion’ – bloomin text message generation) is Suilven in Assynt, but it’s not a Munro or even a Corbett and relatively few people climb it due to its remoteness. I’ve climbed and wild camped on top and witnessed the morning mists flowing around and over Meall Meadhonach as the first light of the sun back lights the peak, a superb experience. Sgurr na Stri on the Isle of Skye is Britain’s finest view point. But to obtain that view you need to be on top of the mountain as the dawn sun lights up the Cuillin ridge, which means carrying 25 kg of camping and photography gear over 4 hours to a very remote location.

I frequently climb mountains in the dark, even in mid-winter. I need to be ‘up top’ half an hour before sunrise to capture that special light which happens just before and after dawn. I’ve never met anyone in the morning on the way down when I’m on my way up, it’s always me coming down when others are going up. They probably think I’m mad: they may be right. What sensible person climbs the same hill 100 times?

Cracking pics there and a very enjoyable read.

Good stuff , i've been up twice this year ..might even go for a third once the snow arrives

"..........rupturing my medial and cruciate ligaments along with various other cracked and damaged bits and bobs......" Ouch!

I think your photos give the answer to that! Absolutely superb, for me not only capturing the sublime views, but the very atmosphere of the different seasons, weather and time of day (or night). One of the best reports I've ever seen.

Since moving to Shropshire 3 years ago, my wife and I have climbed local Corndon Hill 60 times, 42 of these visits being on consecutive days last year in the school summer break. Why? And it is only a modest 513m.

Well, whilst not having the stature and views of Ben A'an, it does have 360 degree sight of hills and mountains in Shropshire, Wales and beyond, my favourites being the sometimes snow-capped whale shape of Cadair Idris seemingly floating 60km in the distance, and the Arans ridge. And of course the weather and light conditions, different on each visit. We have experienced deep snow, frost and rime ice, cloud inversions and a brocken spectre along with spectacular sunsets, clag, rain, absolute stillness and howling wind.

It has been uplifting and humbling to have been part of all of these things from the same place many times and I recommend it. So, sensible? Very much so.

Ouch, to the injury, but well done on the 100 ascents.

A brilliant selection of photos and very entertaining read, except for the injury that sounded brutal!

Well done on a top achievement, getting up any hill 100 times no matter the time of day or weather takes motiviation and despite a lack of height Ben A'an is indeed a steep one and worthy of someone showing it such dedication.

Of course it does help when you have one of the best views in all of Scotland to enjoy for such a short vertical climb!

Some stunning photos of what looks like a great hill.

Yes, you can keep it, as long as you let others walk it.

You have put my 19 climbs of Carn an t-Sagairt Mor well and truly in the shade.

A really entertaining read, and some great pics. As someone has already said, you answer nicely by the report any question of why one should ascend a hill 100 times!

Nearest place from my home, at least 300m high, is the Eiffel Tower

This is why I envy all of you who live in Scotland! Just take an hour or so to climb a mountain whenever you fancy.

Wonderful. Yes, you do get to keep it, in your mind's eye for ever more.

"Mountains, even small ones, are never easy. Each is a challenge for someone."

Beautiful photography. And what an amazing challenge.

Great walk report...the perfect hill for 100 different potential outcomes and camera shots. If it was mine...I'd let you keep it...! BUT its ours...so you have it already!! Keep going on and on and on and.....!

Great Hill and report. I have a similar sized local hill - The Girron above St. Fillans. It is equally steep i think, and if I do it in an hour I am well pleased. Trouble is I've never counted my ascents - above 50 I guess - so well behind you . And it doesn't have quite as good views - though they're not bad

Top
44 people think this report is great. Register or Login free to be able to rate and comment on reports (as well as access 1:25000 mapping).