Wednesday seemed like the best day of the week weather-wise, and with no snow on the tops yet I headed for Sgor Gaoith. I found it a really nice and short hill walk, which I would love to do again, hopefully with better visibility on the top!

I was first into the car park by about 10 seconds (a win is a win!) though my competitor spent much less time faffing and was off on foot before me by a few minutes. I set off just before 09:00. The first part of the walk meanders through some lovely old pine woods; not particularly grand pines, but sitting well within the landscape. As the woods began to recede the view of the hills opened up and it was clear that the tops were not enjoying the same sunshine as the woods, and that at some point I was going to need to put more layers on.

The path is well maintained and easy to follow, climbing and traversing gradually and crossing a couple of small burns on the way. I stopped for a rest and to layer up upon crossing Allt a'chrom-alltain, though would soon have to add yet more layers as the wind really picked up before getting into the low cloud.

Visibility was poor in the cloud and I must have missed my exit though the path was still easily discernible - I was aware that I hadn't heard any "pings" from my old Garmin and when I checked to see if I was still on track I found I was almost 1km South of where I should have been, heading more for Carn Ban Mor than Sgor Gaoith.

I navigated back North with my trusty compass to get back on track and was at the ridge in short order. I was hoping to enjoy the views of Loch Eanaich and Braeriach but there wasn't much visibility at the top, though the wind had died down nicely. I was enjoying the ridge walk and decided to make the small jaunt along to Sgoran dubh mor as well, before starting back down the hill (or so I thought).

As I was trying to descend I kept finding myself off-track until i realised that the track I had loaded in actually took in another couple of summits before making the descent (I really should have looked in more detail at the route rather than just load it into the GPS and jump in the car!). So I headed for Meall Buidhe and onto Geal-Charn and as the cloud started to clear I was blessed with some lovely views back down into Glen Feshie.

There was no path down from Geal-Charn and I made good use of my walking poles to control a reasonably steep and slippery descent through heather and moss.This would be punishing on the knees if attempted without poles so be warned!

On re-joining the path at Allt Coire na Cloiche it was then a short and easy-going stroll back through the woods to the car park. 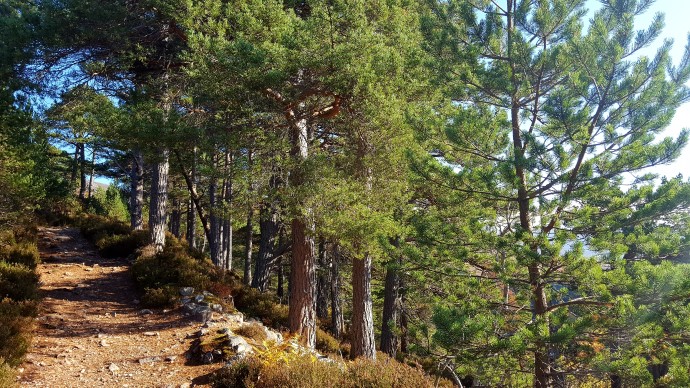 Strolling through the woods That's more like it! Why couldn't it have been this clear from the top?! 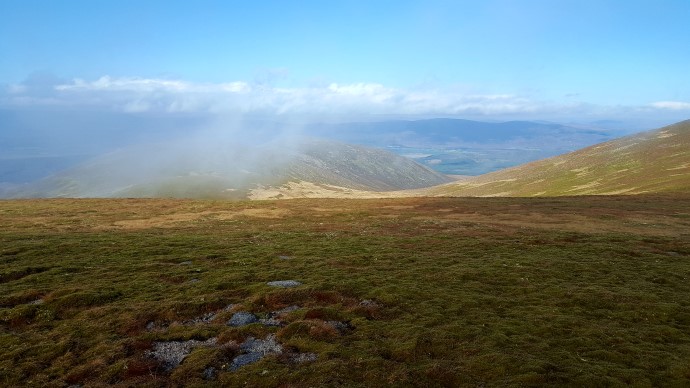 Views starting to clear on the descent Not much to see from the top unfortunately Looking back down toward Glen Feshie Some young pines making a recovery

A shame the visibility was so poor given the views are fantastic and how good the weather was for you on the way up and down. I do keep meaning to head back to glen Feshie and was looking across to it from the Monadhliath mountains just recently.

Not the easiest of hills to make a circular route out of though. I went up càrn bàn beag then càrn bàn mòr then came off the east side of geal-charn and round the gentler slopes of it. I should have done as you did and went down the southern side.

Lovely walk ,shame you missed out on the great views.Where you following the WH route as it cuts off the path and heads directly uphill shortening the walk by 1/2 mile rather than following the path up on to the plateau towards Carn ban mor.
Confused me for a minute but I preferred sticking to the path as the gradient was easier.

It's such a nice walk, shame about the summit but at least half way up there was a view. I was very lucky to have stunning weather when I went. At the time, I reversed the WH route, working hard to get up Geal Charn but finding the descent from the plateau (which normally is the ascent) quite agreeable. But with the wet conditions you had, I probably would have slid right back down Geal Charn to start with

A much preferable way to the higher ground than the tedious path up and down from Achlean. An oft visited top for me well that and the wee Greag Ghiuthsachan.....it just sits up across Badenoch from where I stay. Much preferable to have a round trip if this is possible....I often cut short the way up by leaving the upgraded path and follow the allt a'Chroin-alltain directly to Sgor Gaoith. There is still the remains of the old path up to the high ground at.1012....I guess a way to reach the wee building at Fuaran Diotach?
I think that I am right in saying that Sgoran dubh Mor was in the old times considered to be the Munro rather than SG.

gaffr wrote:A much preferable way to the higher ground than the tedious path up and down from Achlean. An oft visited top for me well that and the wee Greag Ghiuthsachan.....

We went up Glen Einich and up Rosses path to Am Phocaid (the pocket). surely one of the best ways up this hill - the climb out of the pocket (on the L) was quite steep