2018-10-22 High Tove.gpx Open full screen  NB: Walkhighlands is not responsible for the accuracy of gpx files in users posts

After taking it very easy yesterday we wanted something a bit meatier today - though not TOO meaty as we are still a bit out of condition. As the forecast suggested it would be the best day of the visit it seemed a good day to tick off some of the fells that would be miserable in wet weather. Tee plan was to climb High Tove, then see how we felt about adding any of its neighbours. 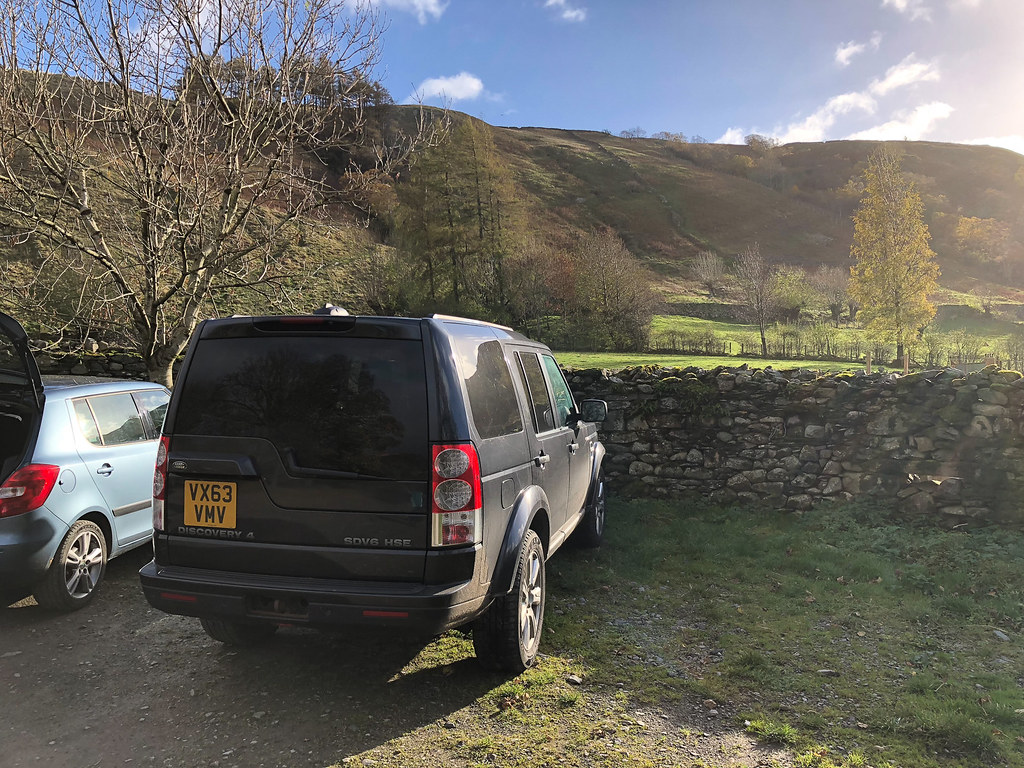 We made an earlyish (for us) start to make sure that there was no issue parking at Watendlath - we needn't have worried as the carpark was virtually empty when we arrived. 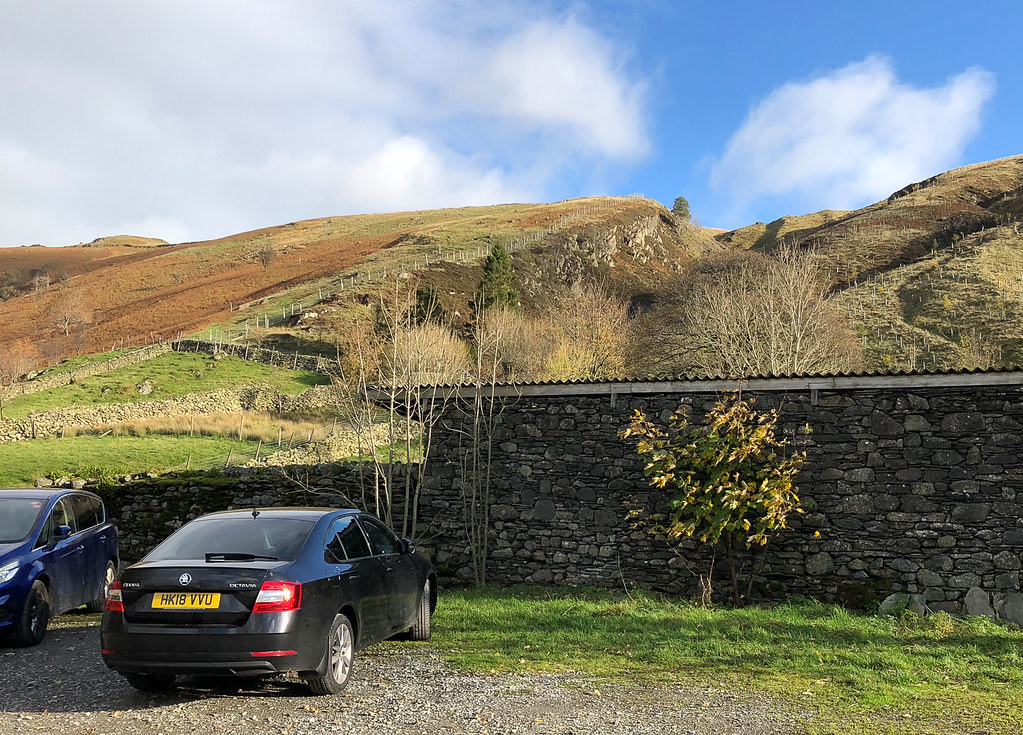 The path from Watendlath to High Tove breaks neatly into two portions - a paved zigzag up the side of the valley, that you can see from the car-park, followed by a gentle if squelchy trudge over the moor, making a beeline for the summit. Little chance of getting lost. 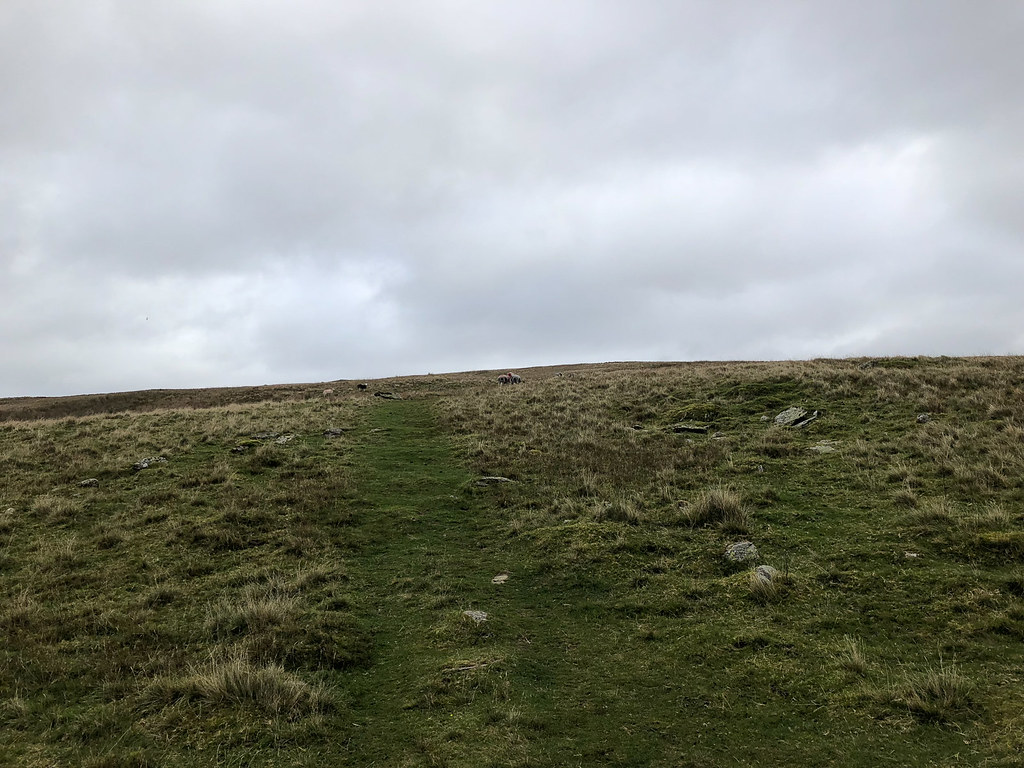 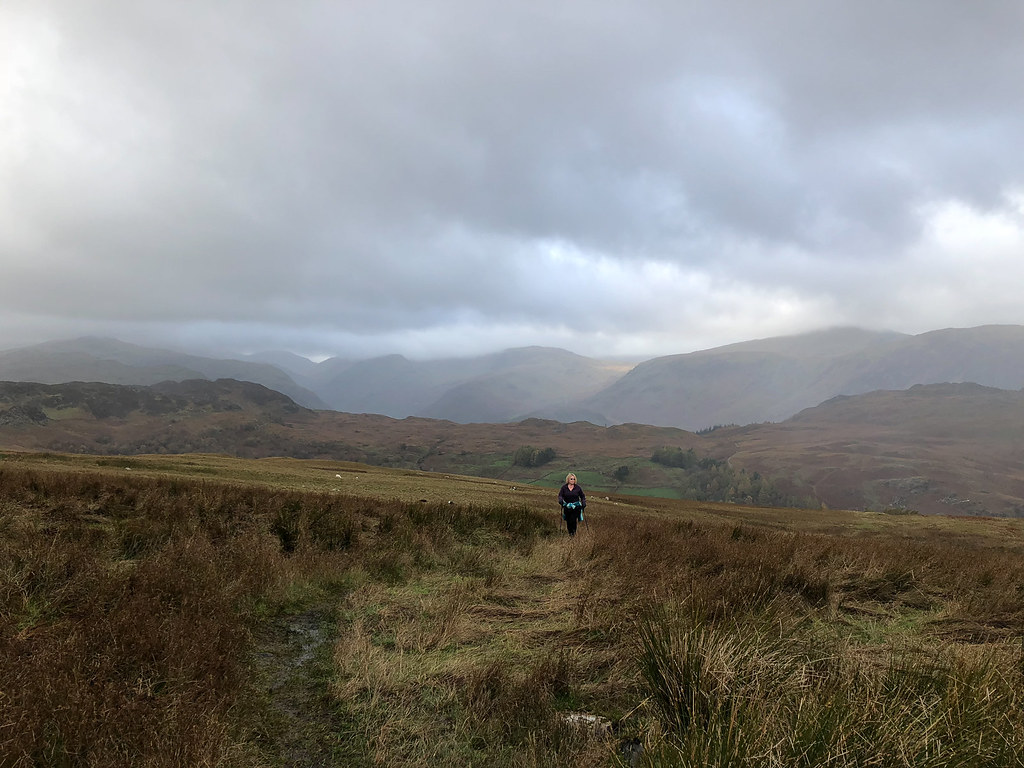 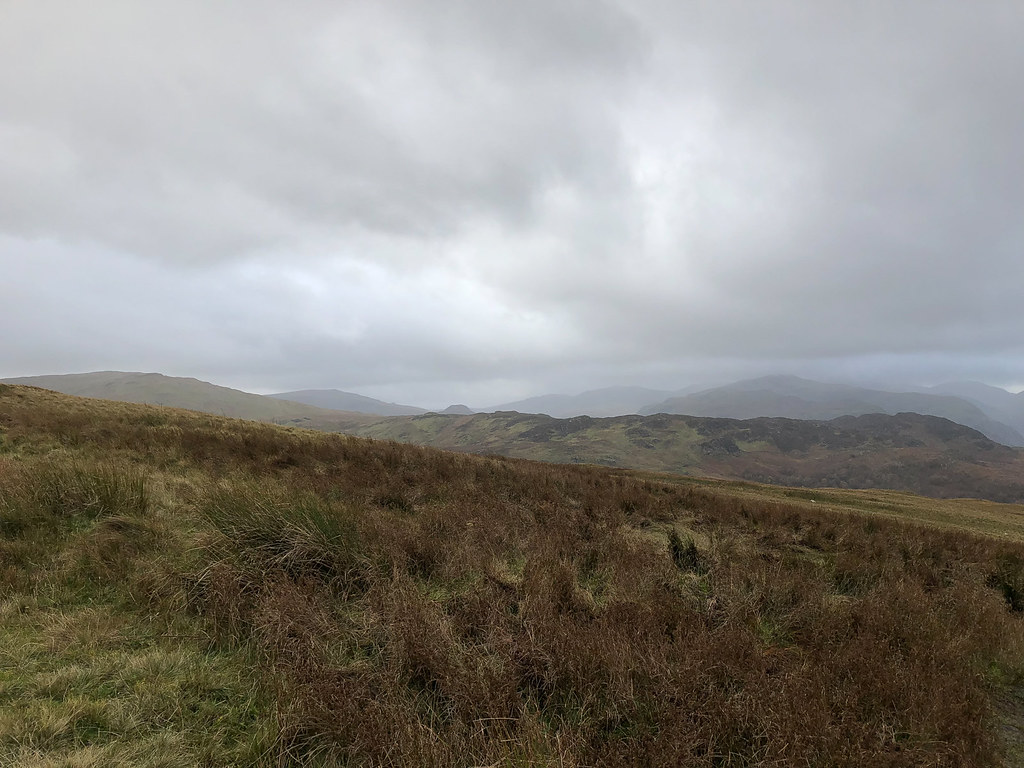 The summit of High Tove was soon reached - somewhat of an anticlimax as it needed so little effort. From here we decided to go to Armboth Fell. This is contrary to Wainwight's advice, who suggests anyone taking the ridge route to Armboth Fell from High Tove is mad. But then again, that seems to be his opinion of anyone going up Armboth Fell by any other route too, and it has to be done sometime. This seemed like the best way to get it out of the way. We followed his advice to go via the ridge path in order to avoid the bog directly between the summits - however we didn't find any path heading from the ridge towards Armboth Fell so had to just make our own way through the heather.

I actually quite liked the twin summits of Armboth Fell. Nowhere near as dull as Wainwright made out, nor had the walk here been anywhere near as wet. 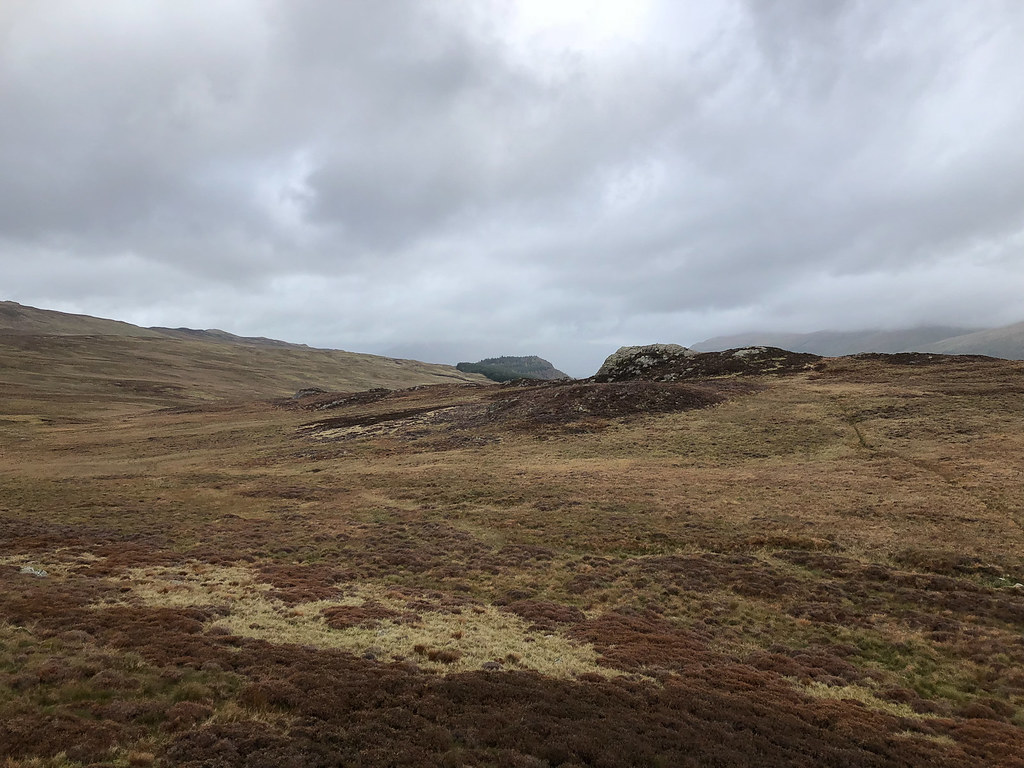 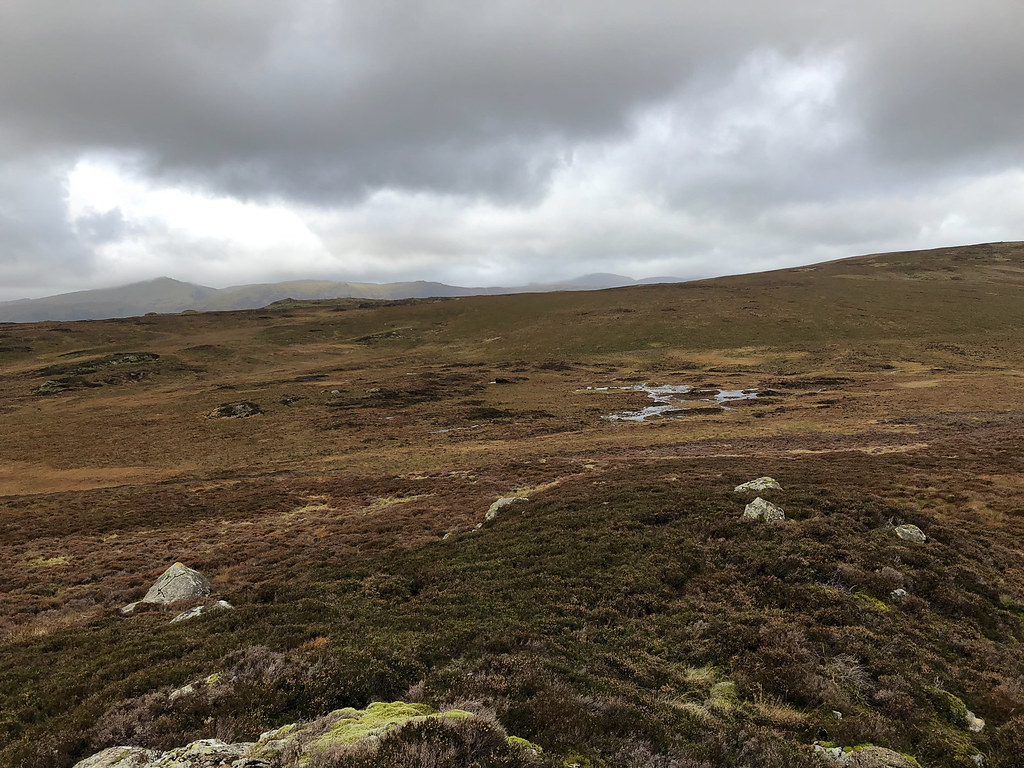 From the main (southern) top of Armboth Fell we could see a clear path heading straight back to High Tove summit, and no sign of the bog that Wainwright claimed made such a route impossible, so we decided to take that on the return leg. It was a very much easier and shorter path than the one by which we had arrived.

We paused at High Tove for lunch, then headed on towards High Seat, following the line of the fence. A major detaour was required to avoid a bog in the middle of the peat hags around the halfway point. 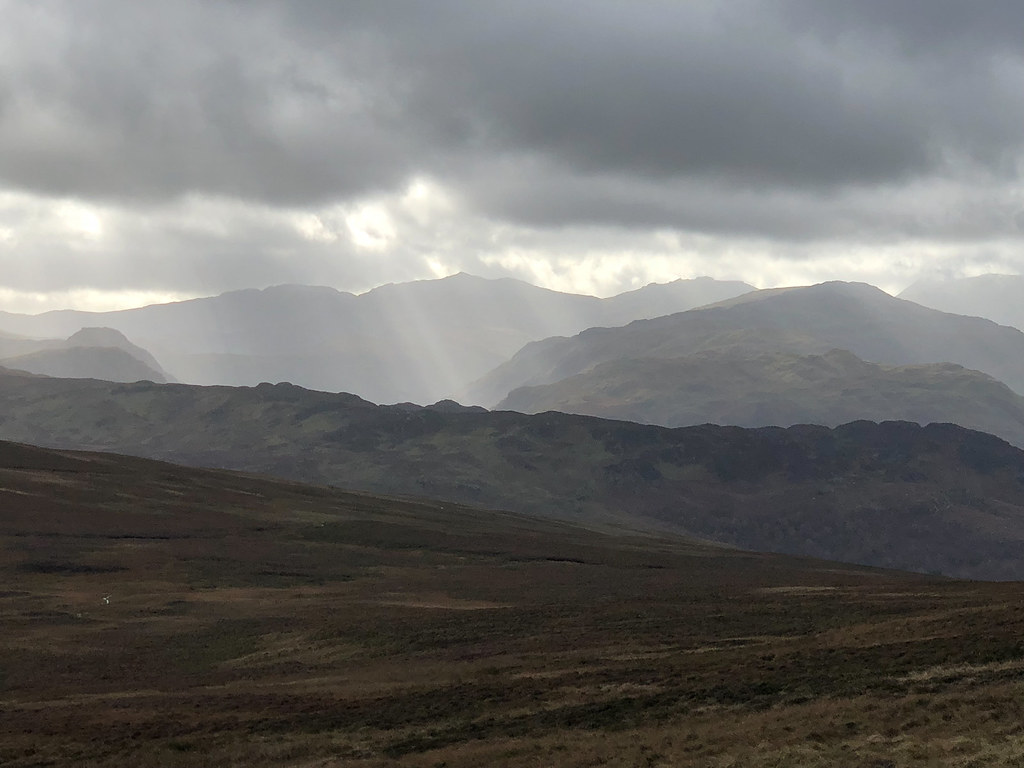 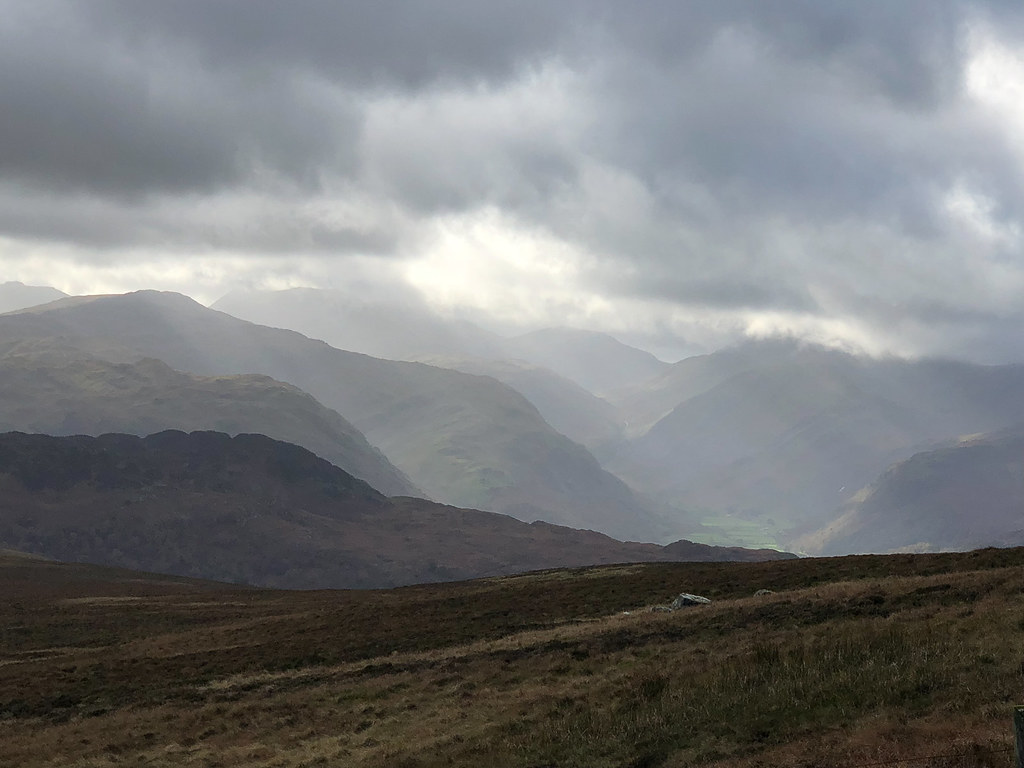 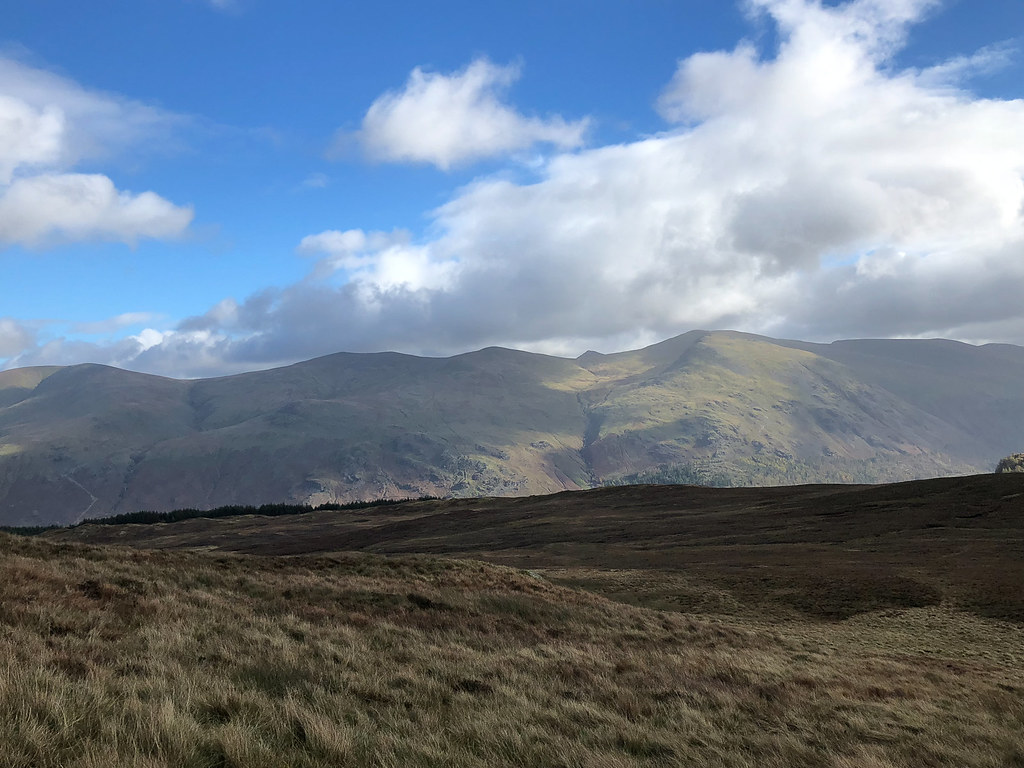 Just after the bog there was a short climb to the summit, and the clouds were starting to lift and offer better views. 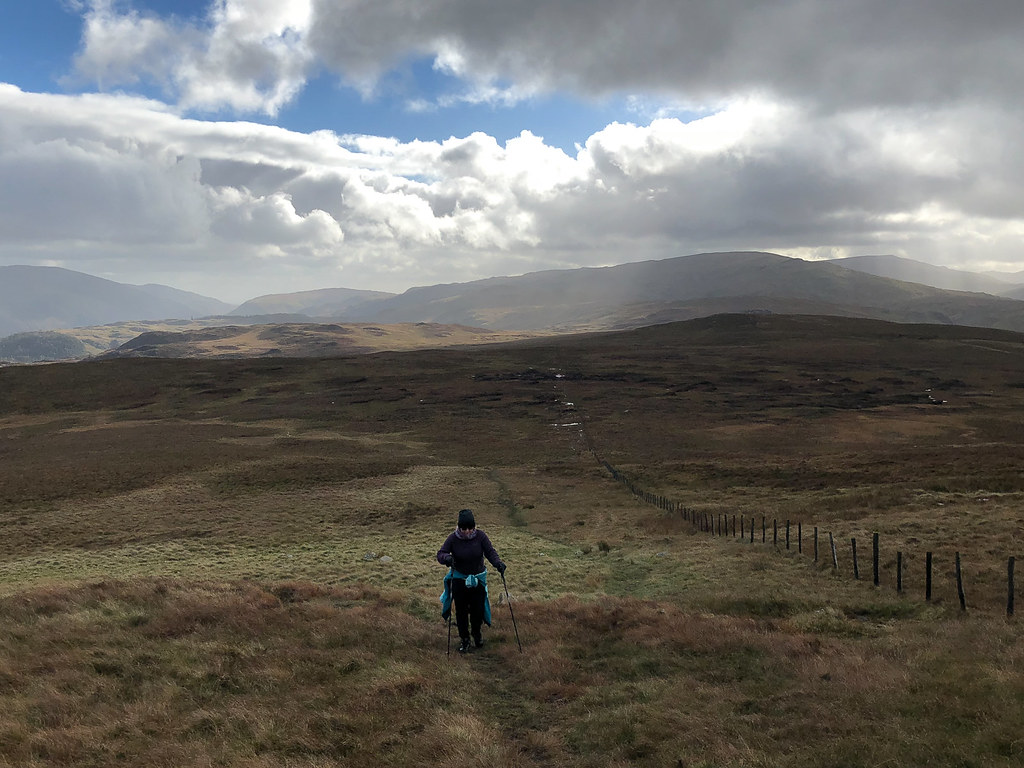 The view from the summit was extensive in all directions, even if some of the higher peaks were still in cloud. 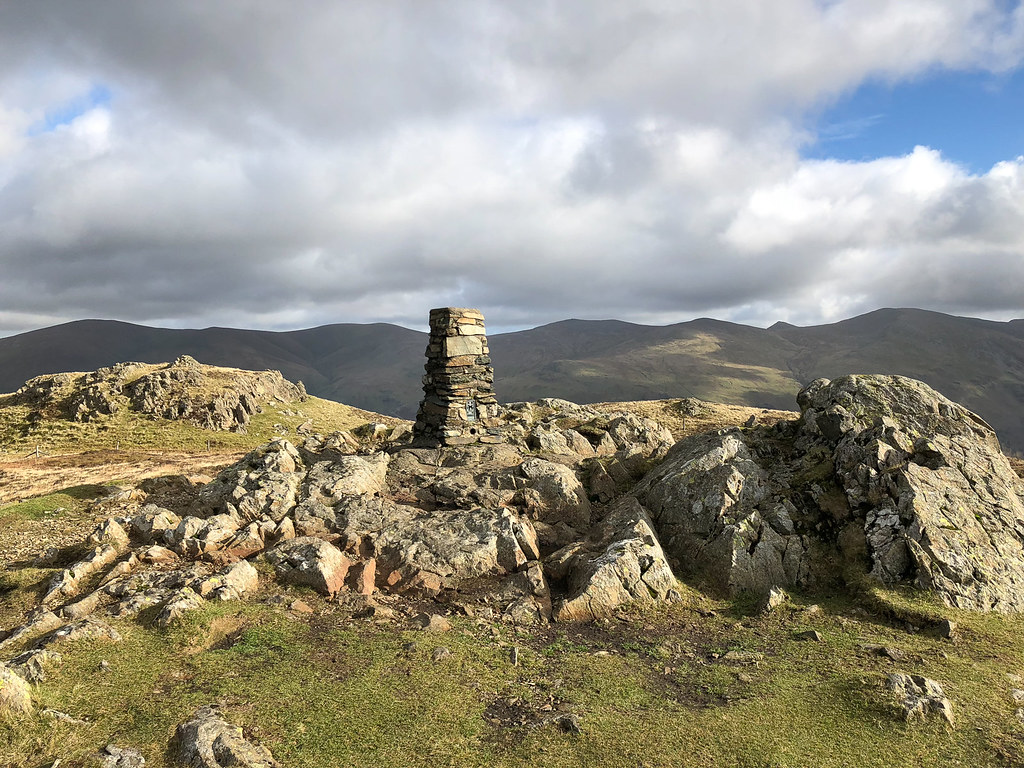 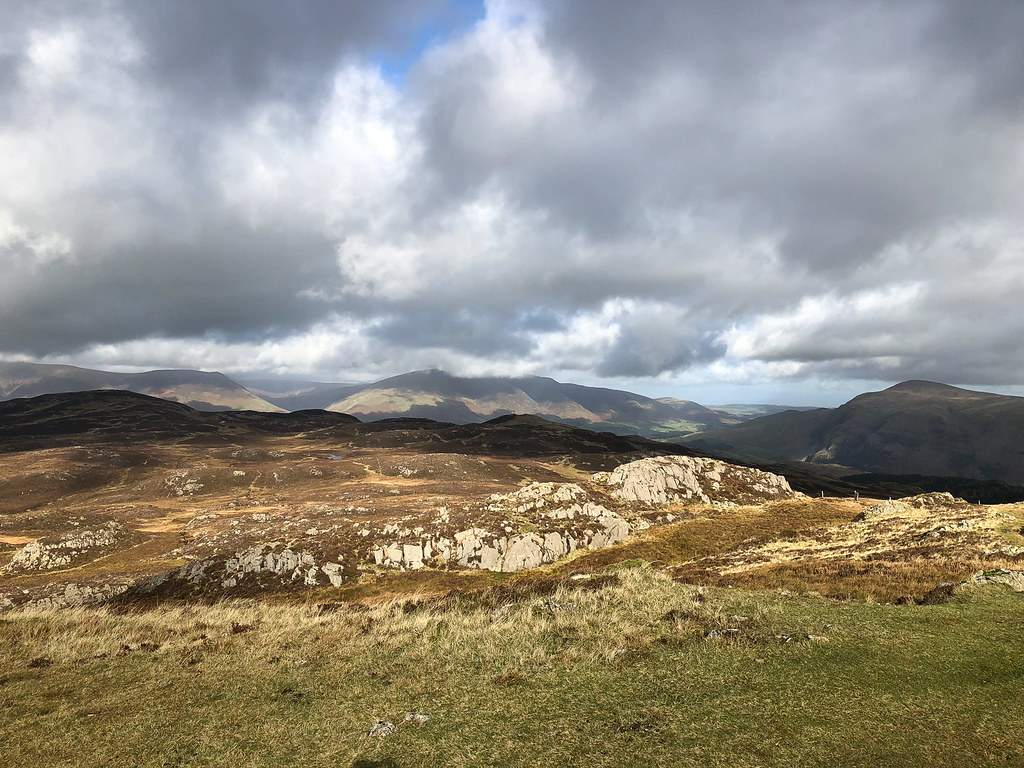 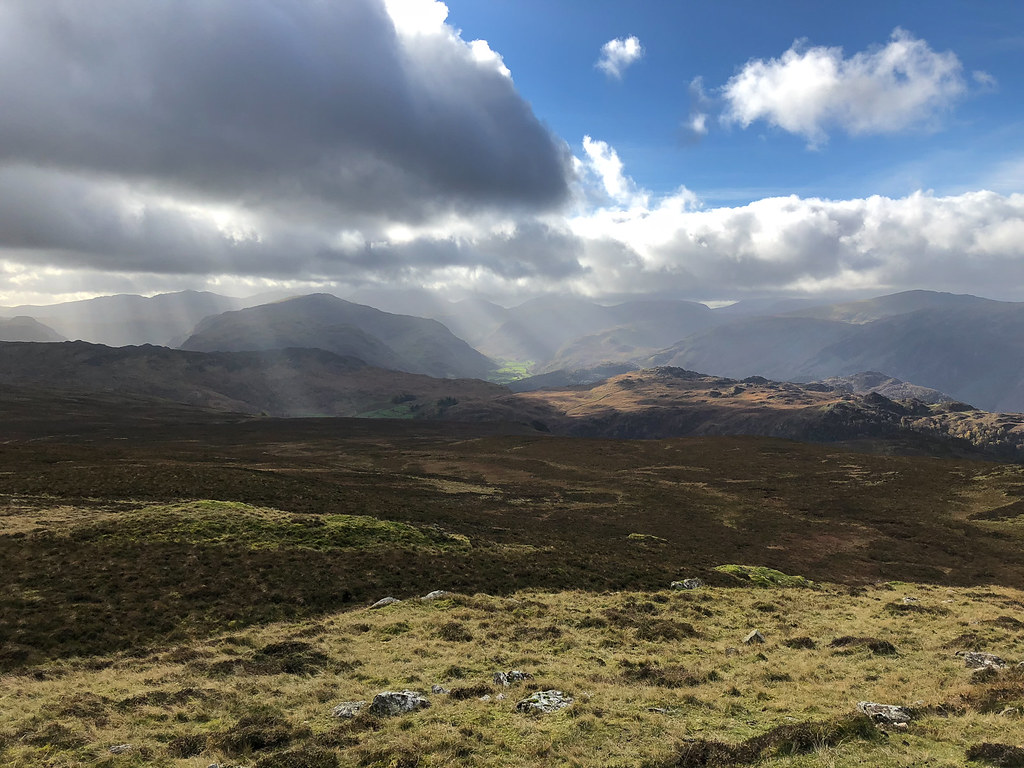 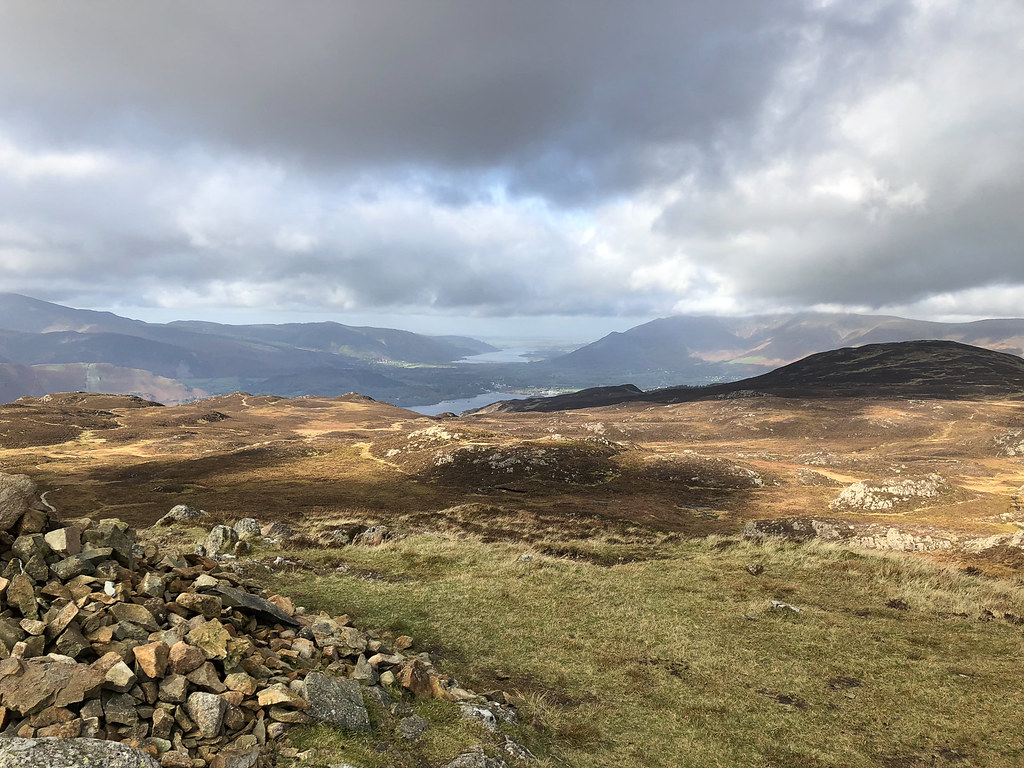 The sun even came out for a few seconds. 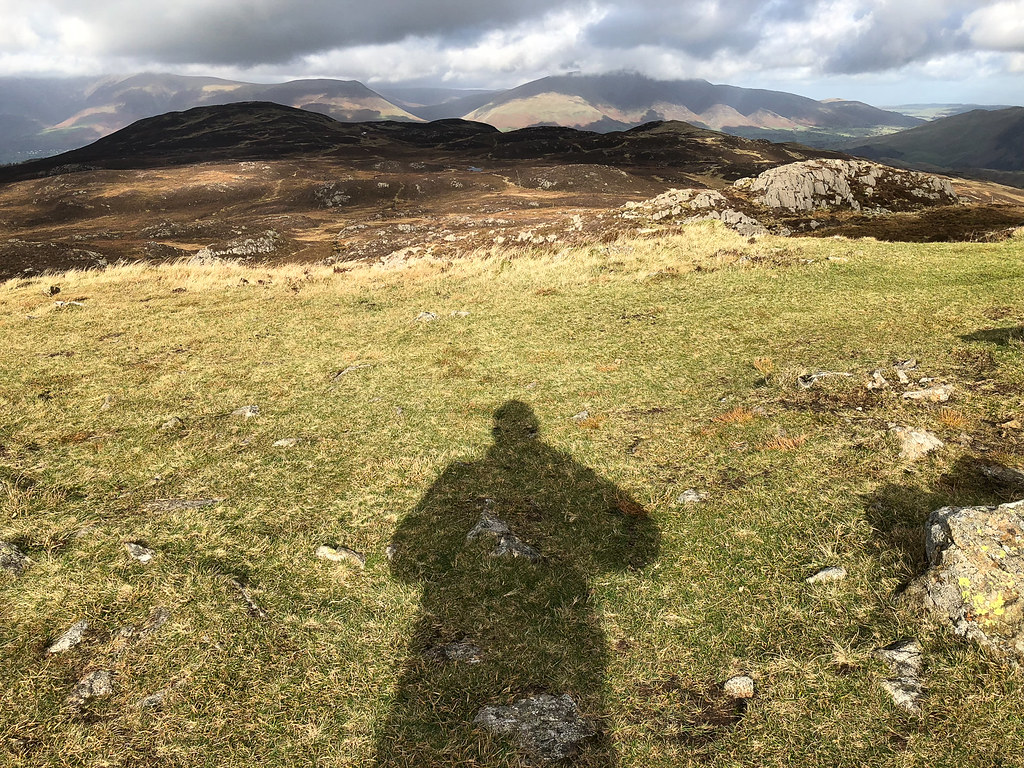 Self portrait with Blencathra

We didn't fancy going back through the bog to descend via a third visit to High Tove summit, so instead we tried to locate the alternative path up High Seat from Watendlath as described by Wainwright. Again there was no sign of the path on the ground - perhaps we were looking in the wrong place as we didn't see many of the landmarks he described either - but ti didn't really matter as it was easy enough going through the heather. There was one slightly tricky encounter with a barbed-wire fence, but we were soon back in Watendlath, just in time for a hot chocolate at the teashop before it closed. 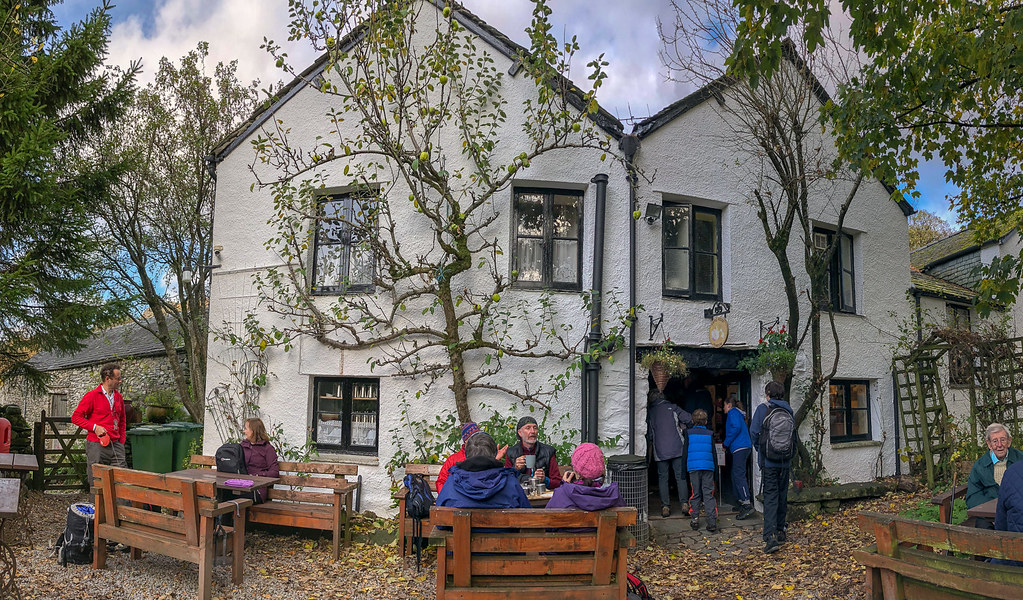