Beinn Ghobhlach and the thin line between orange and grey

Beinn Ghobhlach and the thin line between orange and grey


Saturday. Third and final day of our stay in Ullapool and the weather had deteriorated from being lovely on the Wednesday when we had travelled up, to reasonable on the Thursday when we did Stac Pollaidh, to variable on the Friday when I had done Beinn Eilideach to downright pants today when I had planned to do Beinn Ghobhlach.

I say pants, but there was the merest glimmer of lighter looking skies above Ullapool and the Scoraig Peninsula across Loch Broom from our accommodation. Debbie was quite receptive to the idea of driving me round to Badrallach on the west side of the peninsula and leaving me there for a few hours while she went off exploring low level. I must say the thought of just heading into Ullapool and going on a pub crawl sounded more appealing than tackling Beinn Ghobhlach in such skanky conditions but my desire to hit 60 Grahams before heading back south tomorrow must have gotten the better of me because the next thing I knew I was in the passenger seat heading towards Braemore Junction and the turn off for the Destitution Road.

Maybe it was just the cold, damp, grey conditions but the drive along the Scoraig Peninsula up to the high point of the single track road and then down to Badrallach felt like a drive into a desolate, god-forsaken wasteland. The road (let's be positive and call it that!) was awash in places with livestock sh*t and peppered with potholes. At one point a group of angry looking cows barred the road and engaged us in a stare-off competition. When they refused to move, I got out the car to try to gently encourage them on their way and one of them proceeded to mount another one right in front of me!

Get a room and get off the bloody highway!

Eventually they decided that I meant business and dispersed into the greyness allowing us to proceed to the parking area at the end of the road and the start of the path to Scoraig. Most of the population of Badrallach

Debbie accompanied me a short distance along the path before I took to the hillside and she returned to the car, planning to head round to Dundonnell and the Ardessie Falls to do a bit of snooping with her camera. There is not a great deal to say about the walk after that. It was damp, it was grey, bits of it were autumnal orange. It was fairly short and sharp and I certainly didn't experience the Forked Mountain or her views in anything close to their prime, but it got me out and got the Graham count up to 60. I think I may revisit one day when I am back up here with a half day to spare and the conditions are more pleasant. Back down over the lochs towards Sail Mhor From higher up - Little Loch Broom coming back into view The business end of the Scoraig Peninsula Magnificent views from the summit Summit to sea, or not as the case may be! I decided to spice things up a bit on the descent by grabbing the Sub2K of Cnoc a'Bhaid-rallaich. Maybe the sun would be shining and summer would still be in full swing there!!!! Loch a'Bhealaich and the Subbie My very own private beach! Towards Ullapool and Coigach from the summit Re: Beinn Ghobhlach and the thin line between orange and gre

You've not really sold that walk to me in all honesty

Re: Beinn Ghobhlach and the thin line between orange and gre

Nice one despite dull weather. I think this hill doesn't need any selling

There used to be a wooden cross on the summit, i wonder what happened to it... Maybe somebody took it as a souvenir? 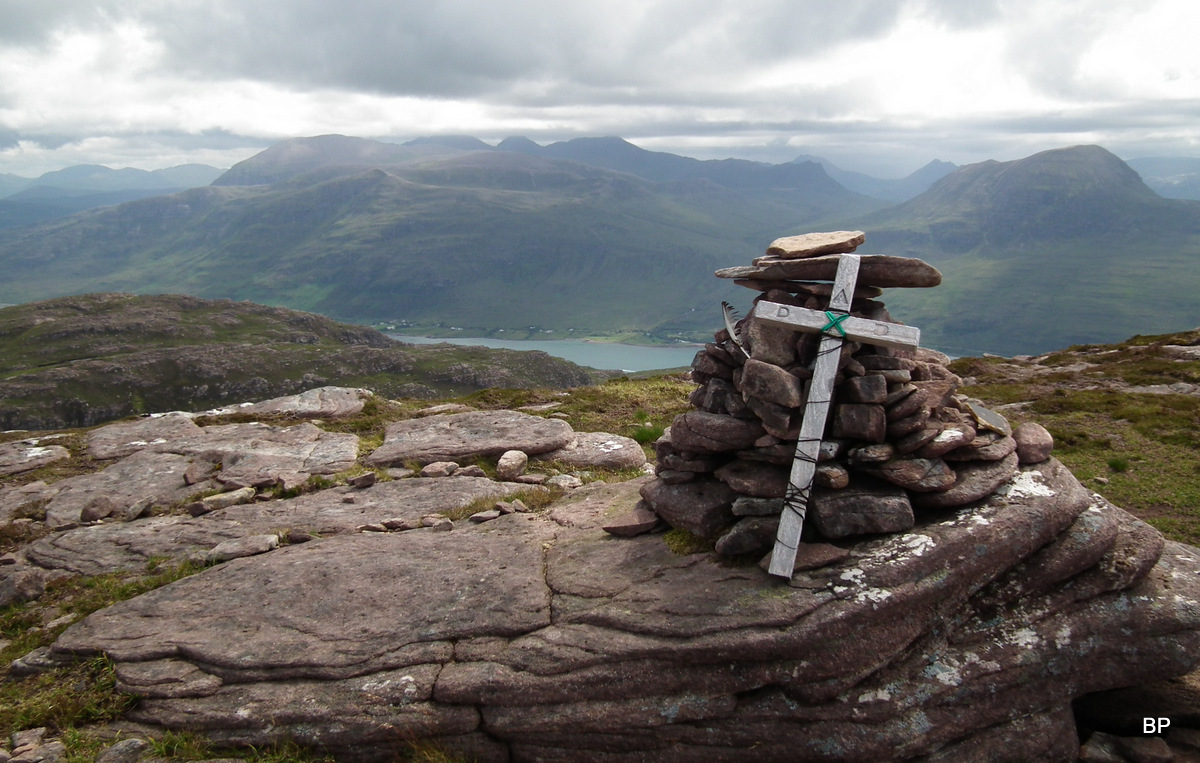