2018-10-25 Eagle Crag.gpx Open full screen  NB: Walkhighlands is not responsible for the accuracy of gpx files in users posts

Two fells left to complete the Central Fells - and they are right next door to each other. Not the ideal day for them, perhaps - there was a good chance the summits would be in cloud, but the opportunity to finish the book was too good to pass up.

We set off fairly early to make sure that there would be parking available at Stonethwaite. Plenty of room next to the post box. 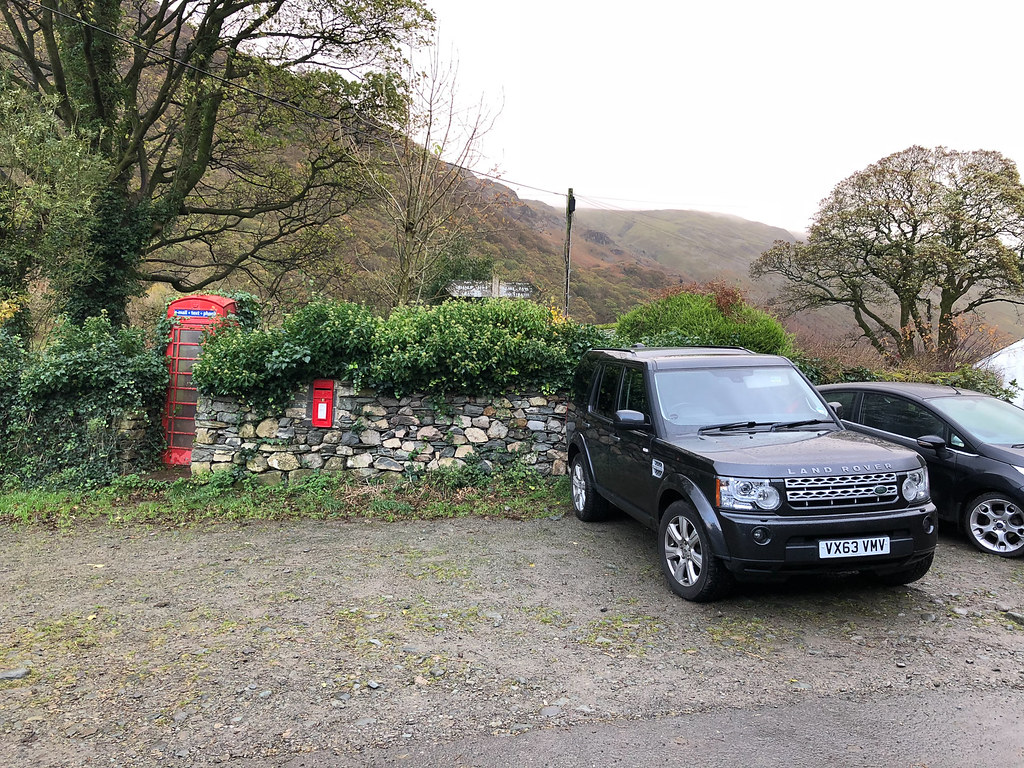 Then over the river to set off on the Greenup Edge path. 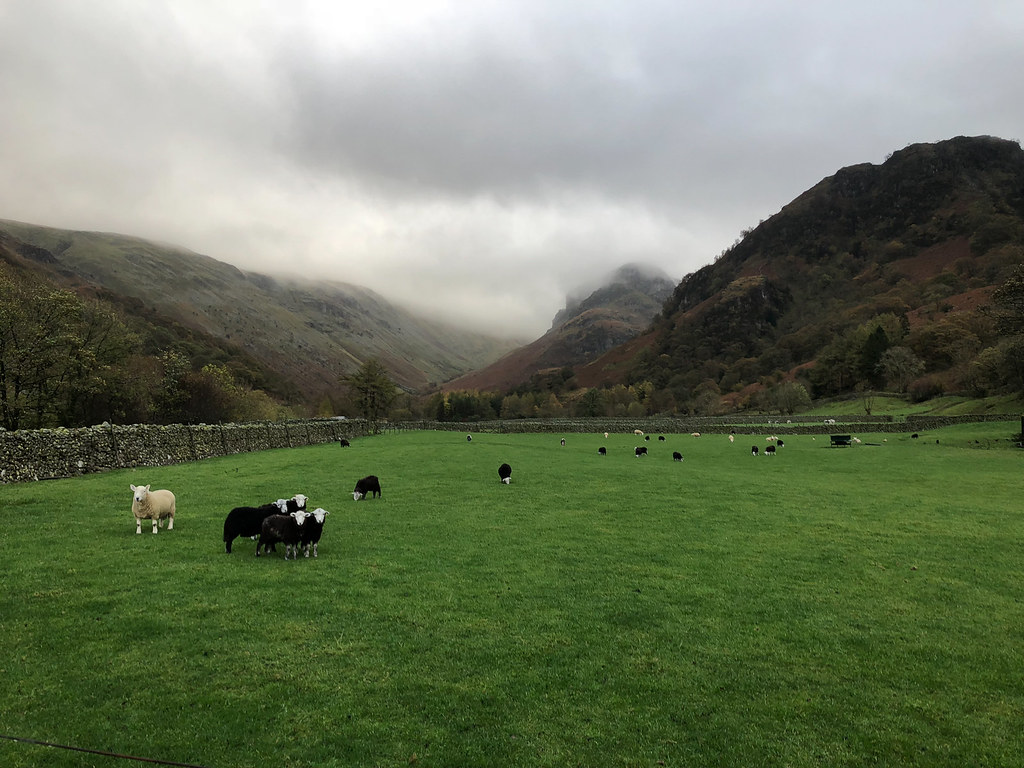 I always like it when you can see your destination clearly right from the start of the walk. 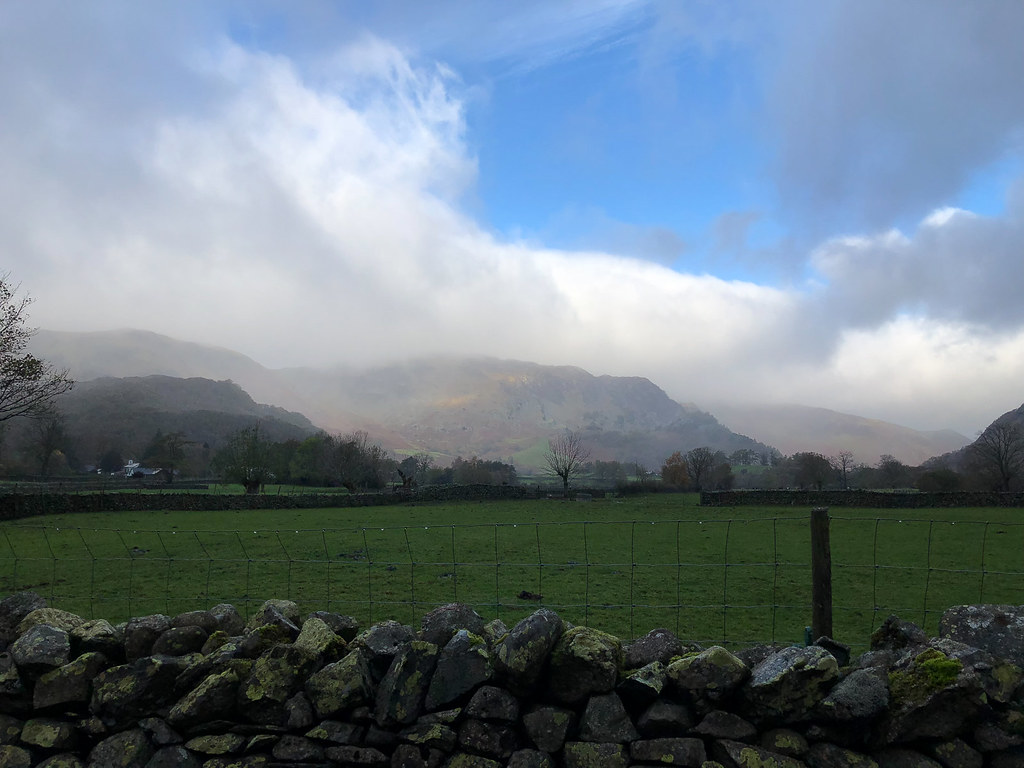 They get sunshine, why don't we?

The day was showing some signs of brightening - at least for the lucky folk on the other side of the valley. 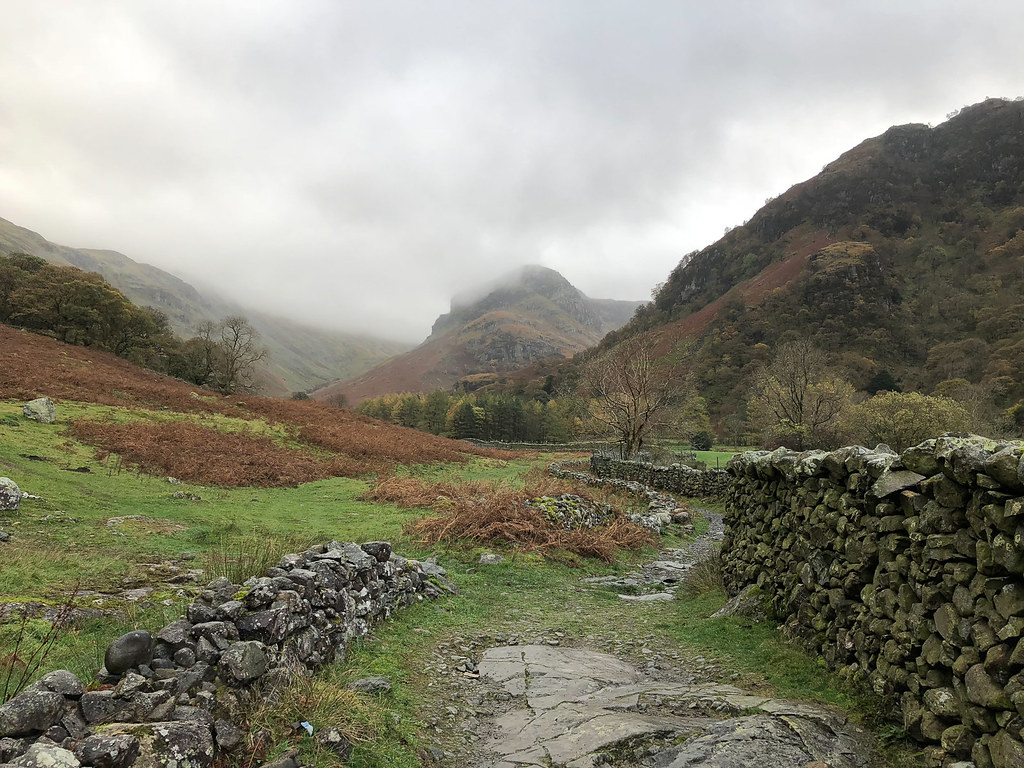 As we carried on up the Greenup Edge path, Eagle Crag came even more clearly into view. 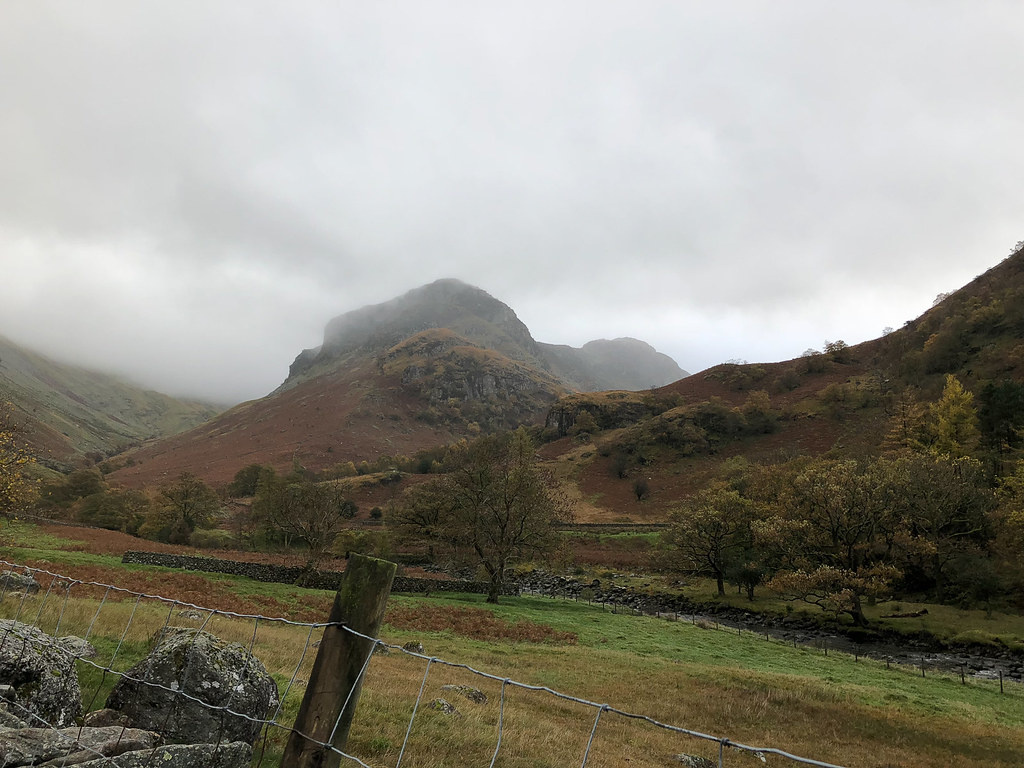 And we could soon see Sergeant's Crag - the day's other target - behind it. 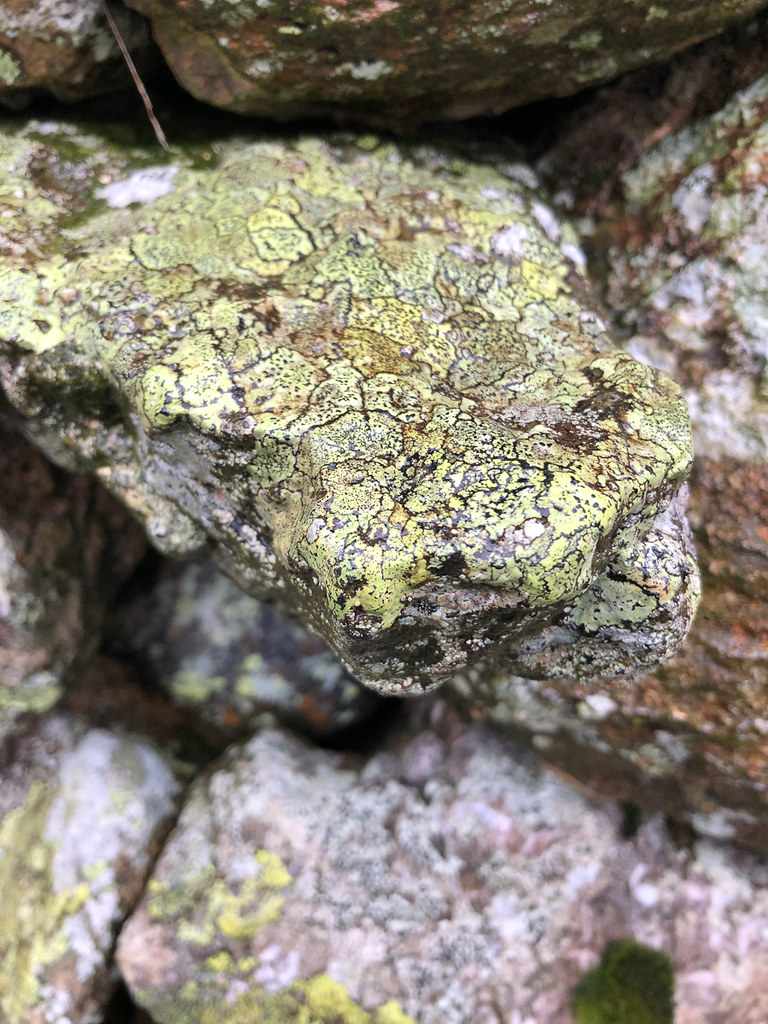 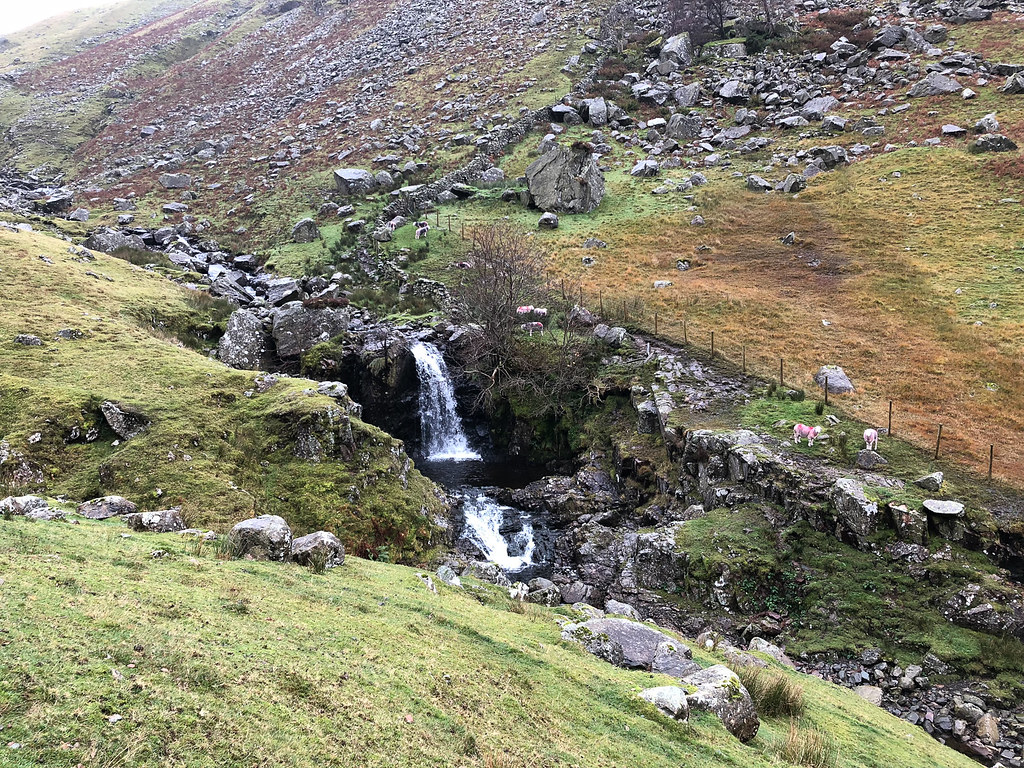 We opted for Wainwright's "option B" for ascent - approaching from the back - rather than "option A" straight up the front, as I'm not too good with climbing exposed crags. The path up beside Greenup Gill was very good and clear, but after we departed the path at the sheepfold on the island, there were no paths to be found. We followed the ridgeline and then the wall to get to the summit. 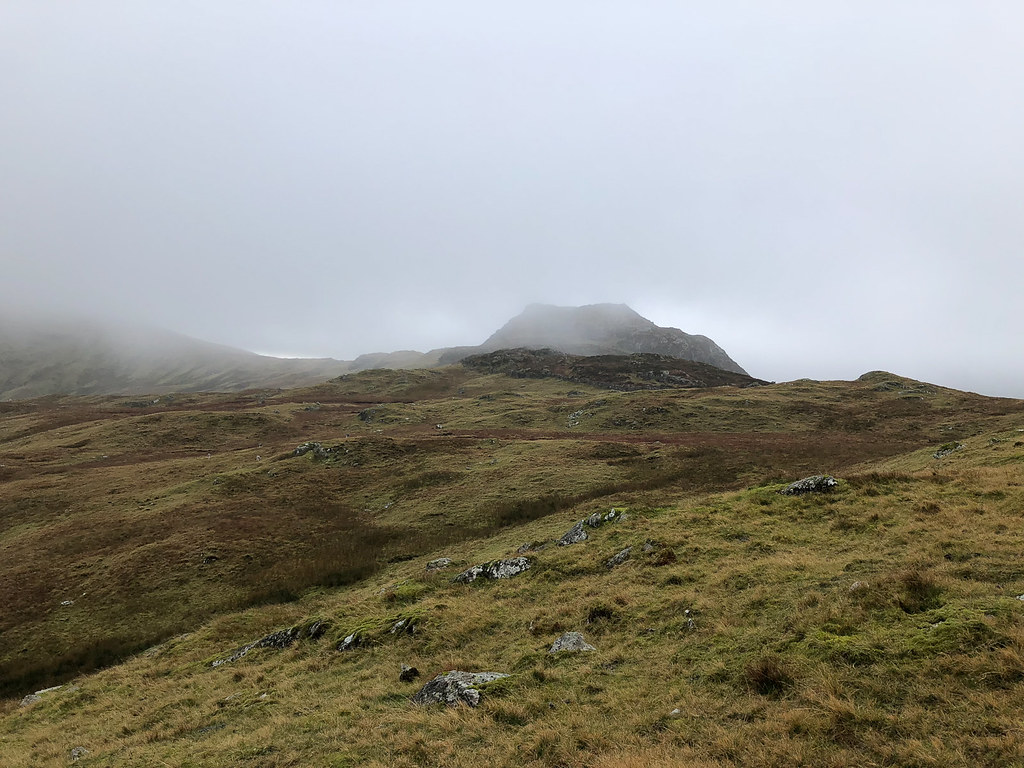 Approaching Eagle Crag from the rear

There was a slightly tricky moment climbing over the wall near the summit - Wainwright had promised a stile but there was none, and worse, there was wire netting above the wall all the way along. But there was room to squeeze behind the wire then lean into it to climb the wall. 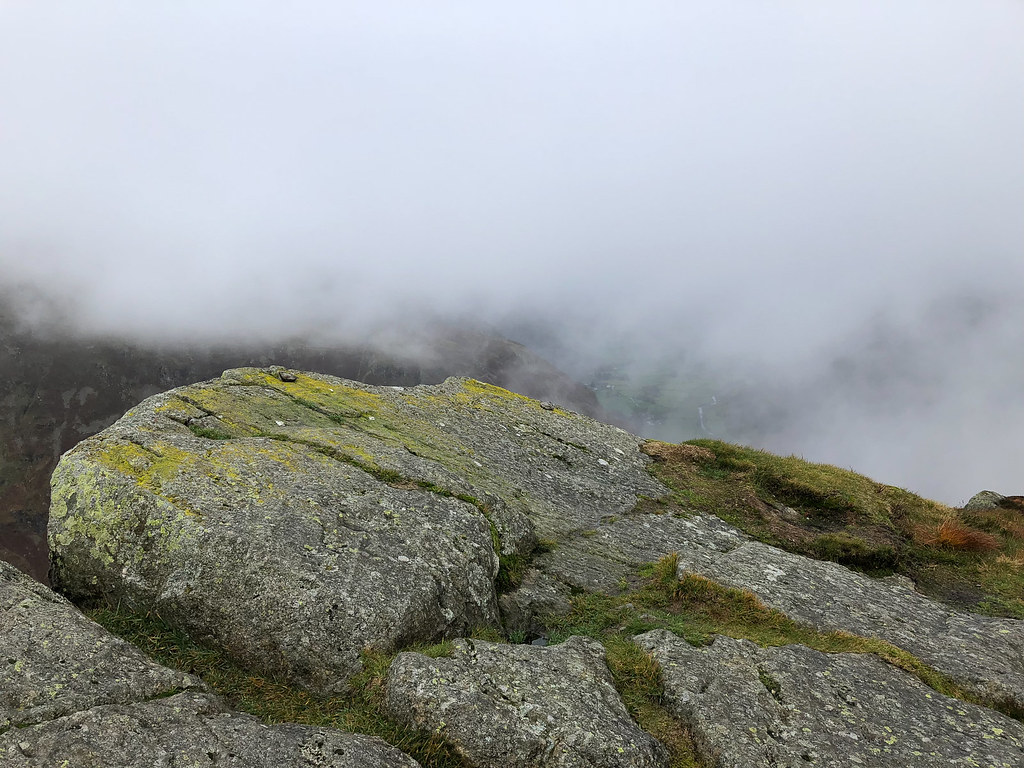 After the wall, the summit was quickly reached. 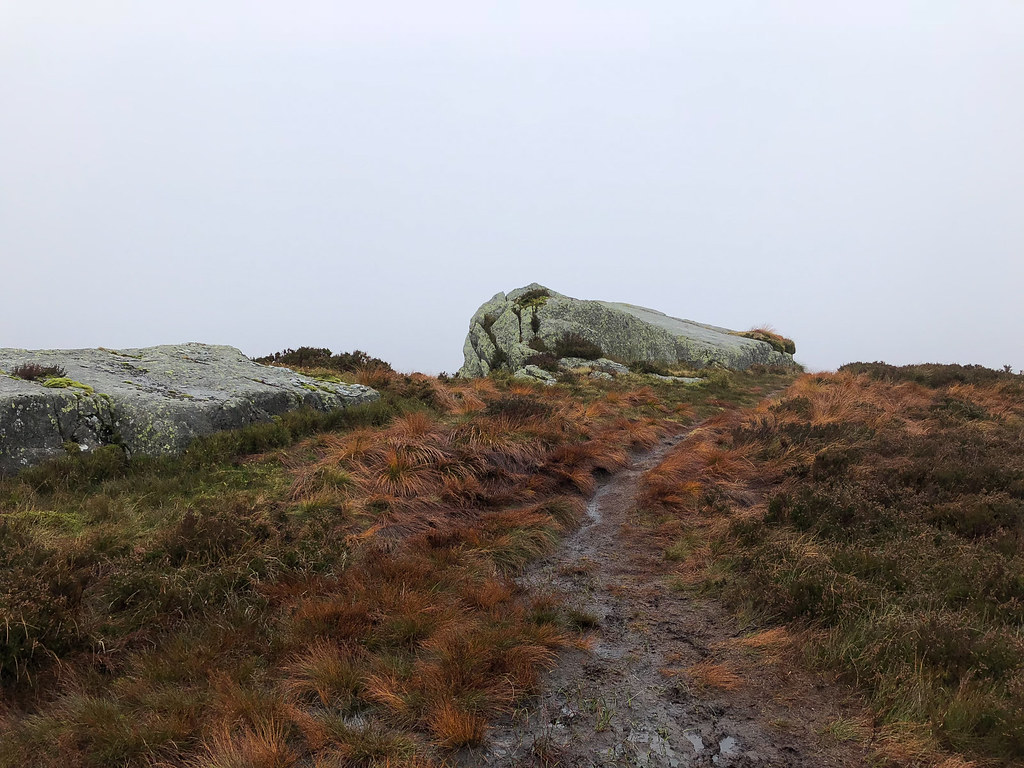 For much of the ascent the summit had been in the cloud, but it cleared just in time for us. After lunch at the top of Eagle Crag, we set off towards Sergeant's Crag. 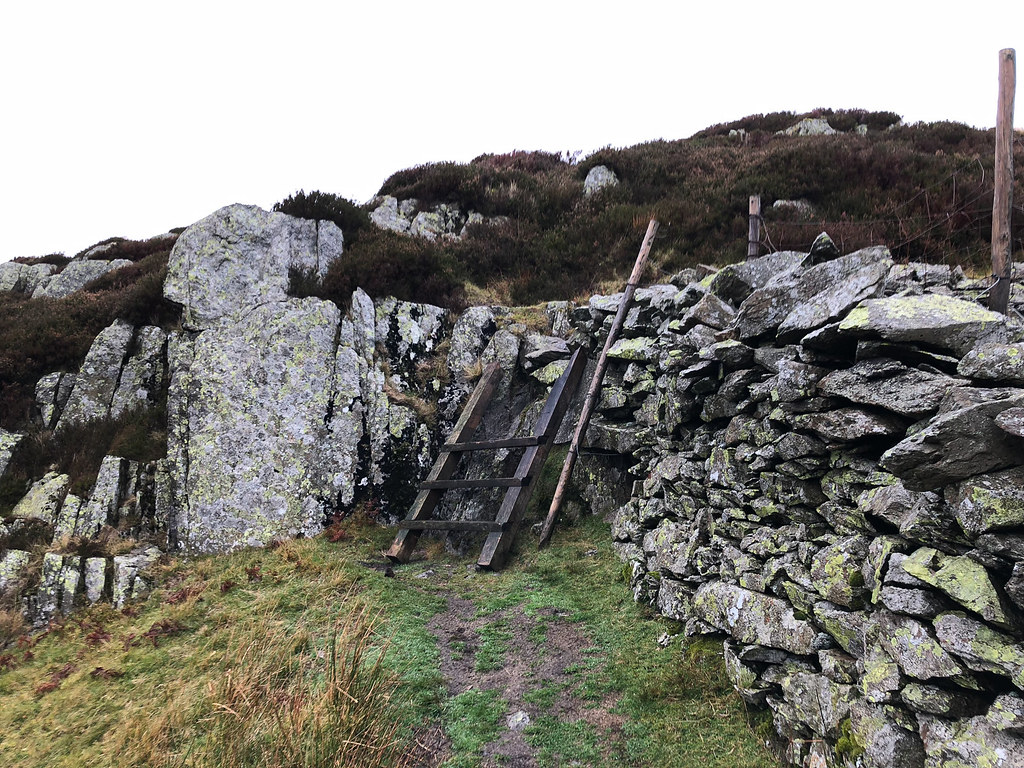 There were steps provided to get down at the corner of the wall, but honestly it would have been better if there had not been - they were so rickety and slippery (and not attached to anything) that it was safer to pretend they weren't there and just use the natural footholds in the rock behind them. 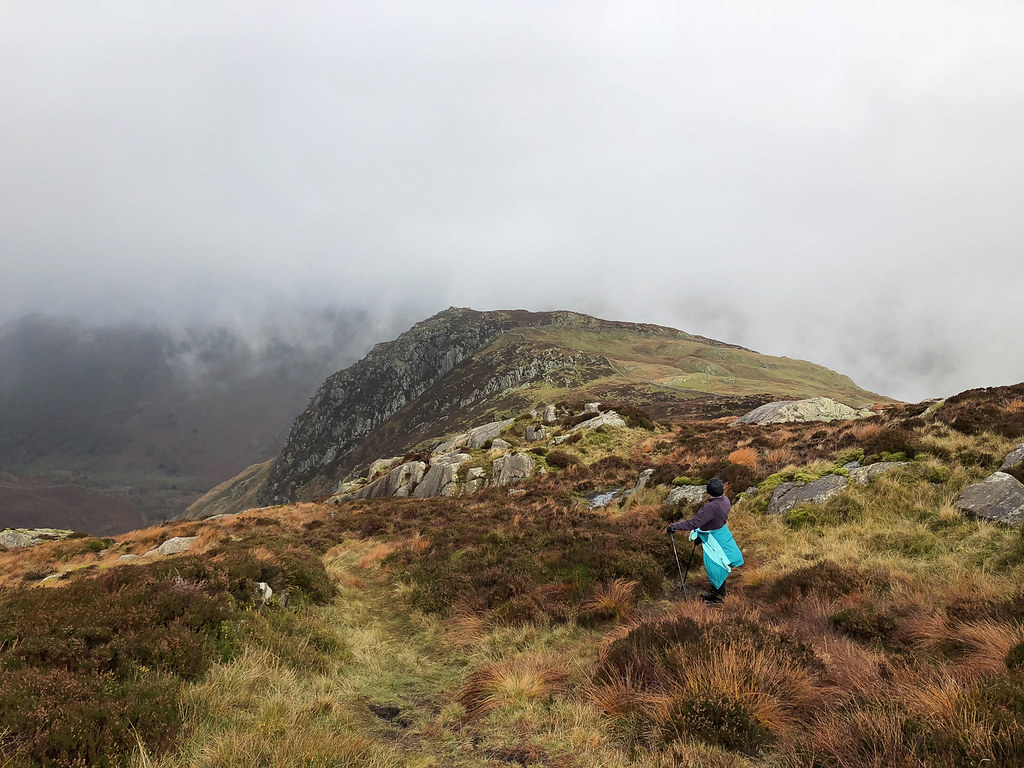 Looking back at Eagle Crag

It was nice to be on a clear path again for the short walk to Sergeant's Crag. 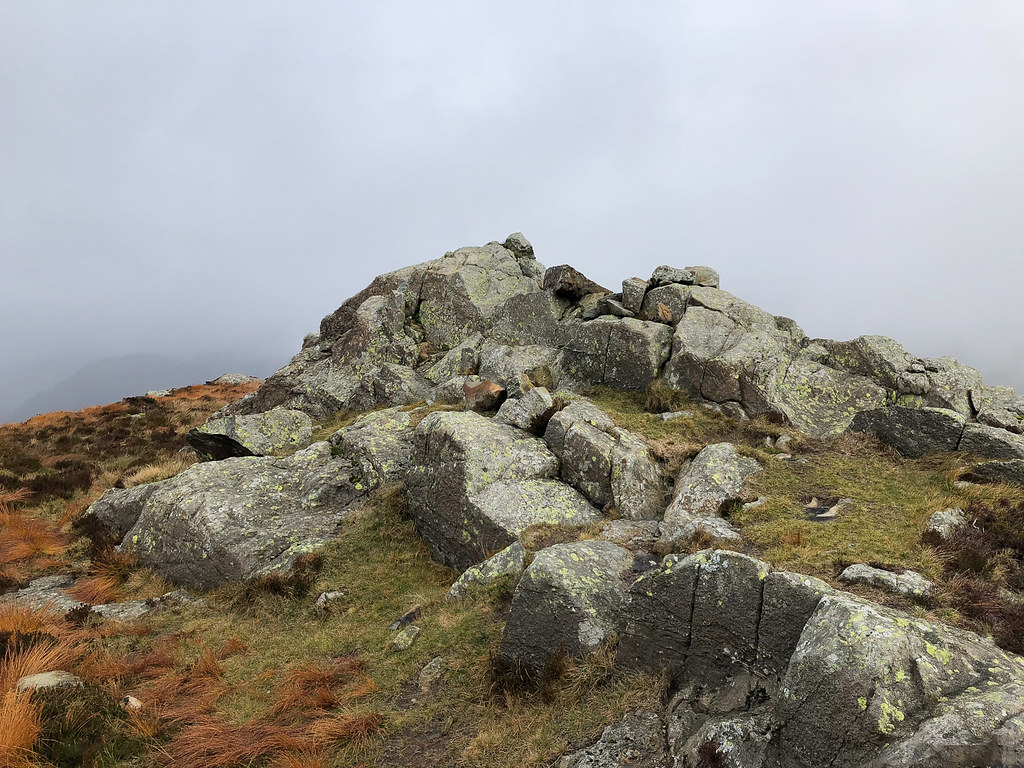 And soon we were there - my 180th Wainwright summit and the final one in the Central Fells book. 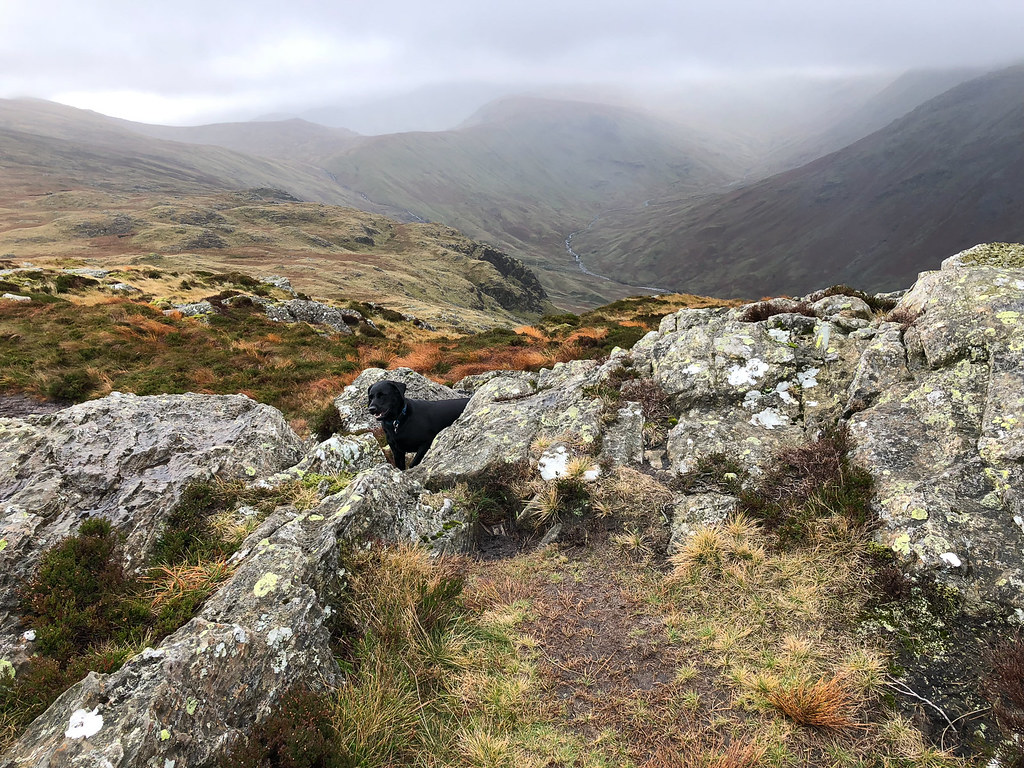 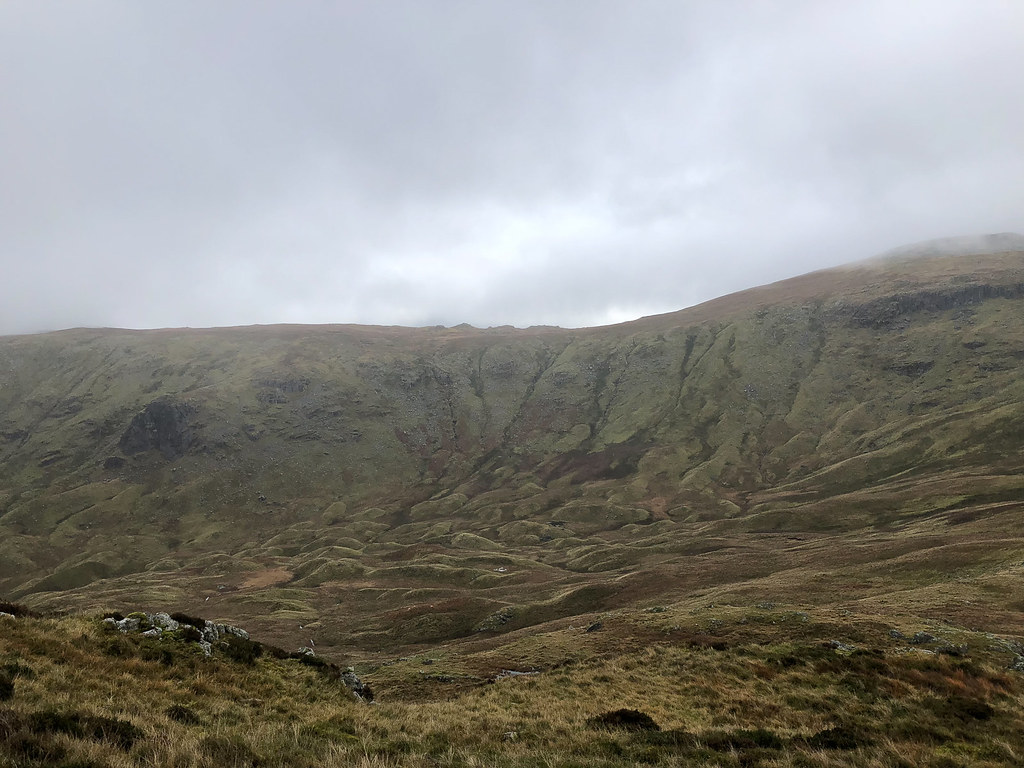 We planned to descend from Sergeant's Crag to the valley at Langstrath as described in Wainwright - at first there was a good path leading down from the summit towards the ridge. 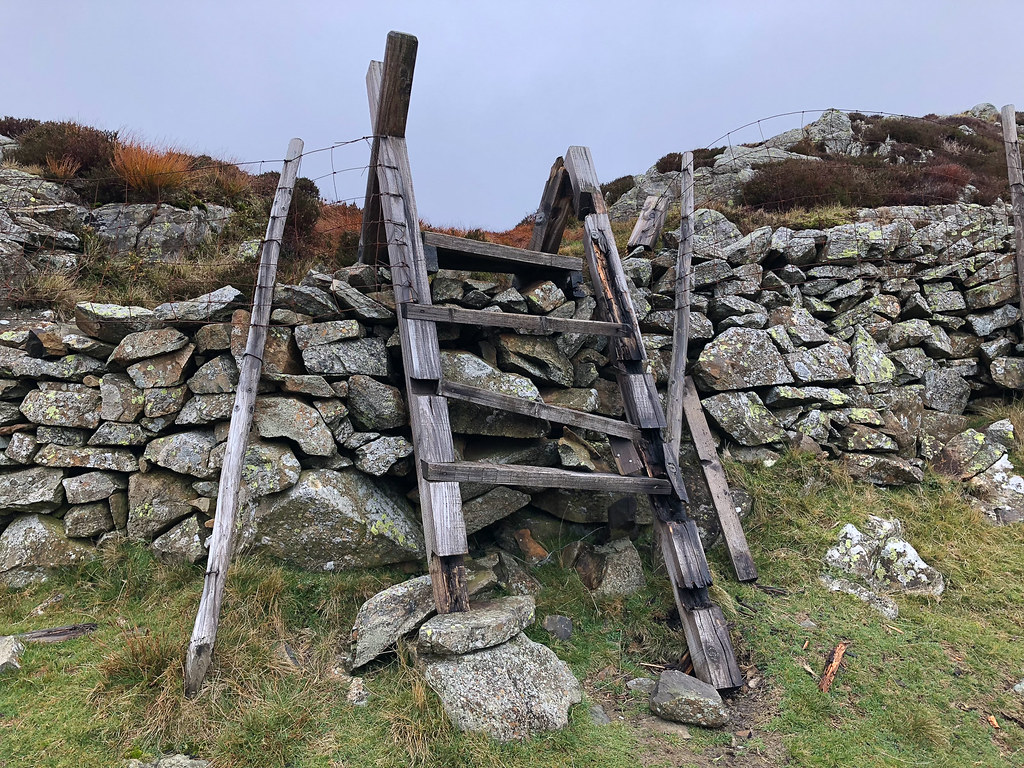 What is it about the steps up here? They all seem to have fallen apart.

The path seemed to be heading more for High raise rather than the direction we wanted - and anyway it soon petered out completely - leaving us navigating by waypoints/GPS again. The aim was to get past the top of Brown Crag then descend diagonally, hopefully locating the path described in Wainwright. But we never did find the path, and ended up coming straight down the side of the ridge just aiming for the footbridge. Not a fun descent. 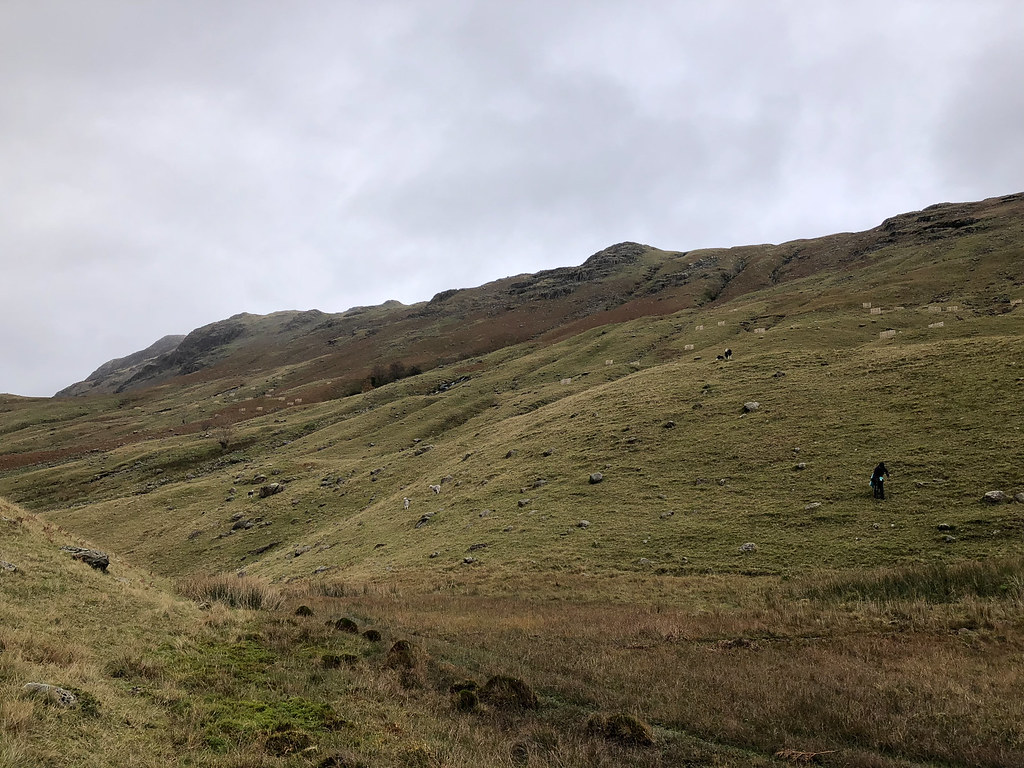 Descending from the ridge

The footbridge is perched across a fairly impressive chasm and above a waterfall - thankfully it seemed to be better constructed than the steps we had used earlier! 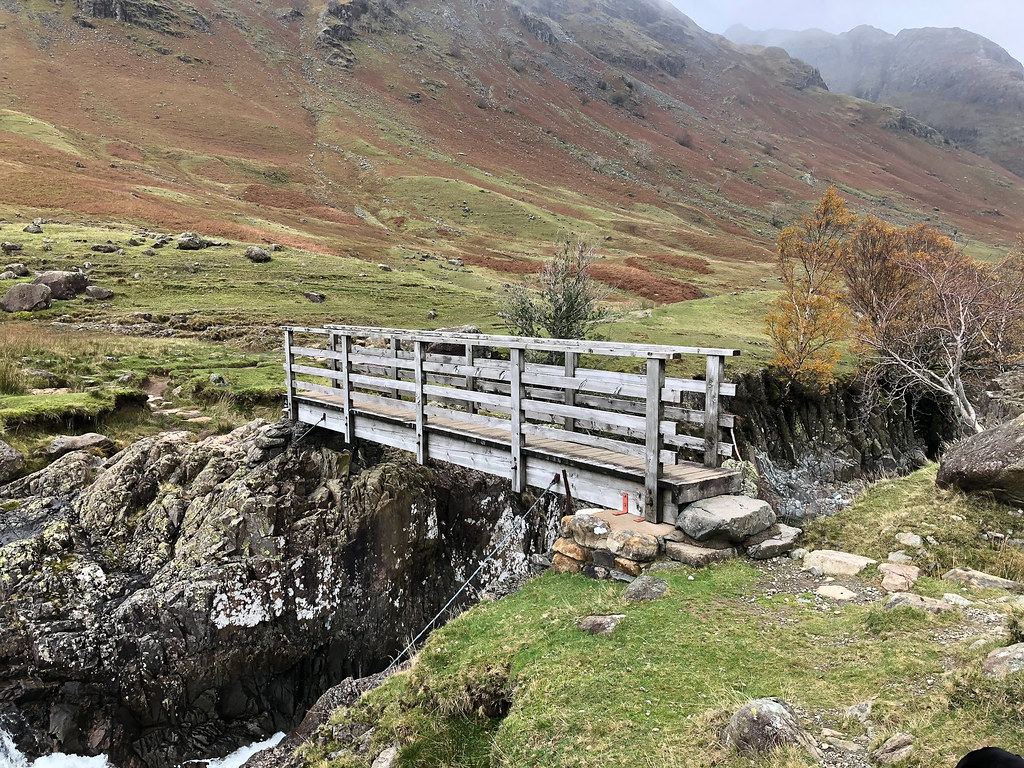 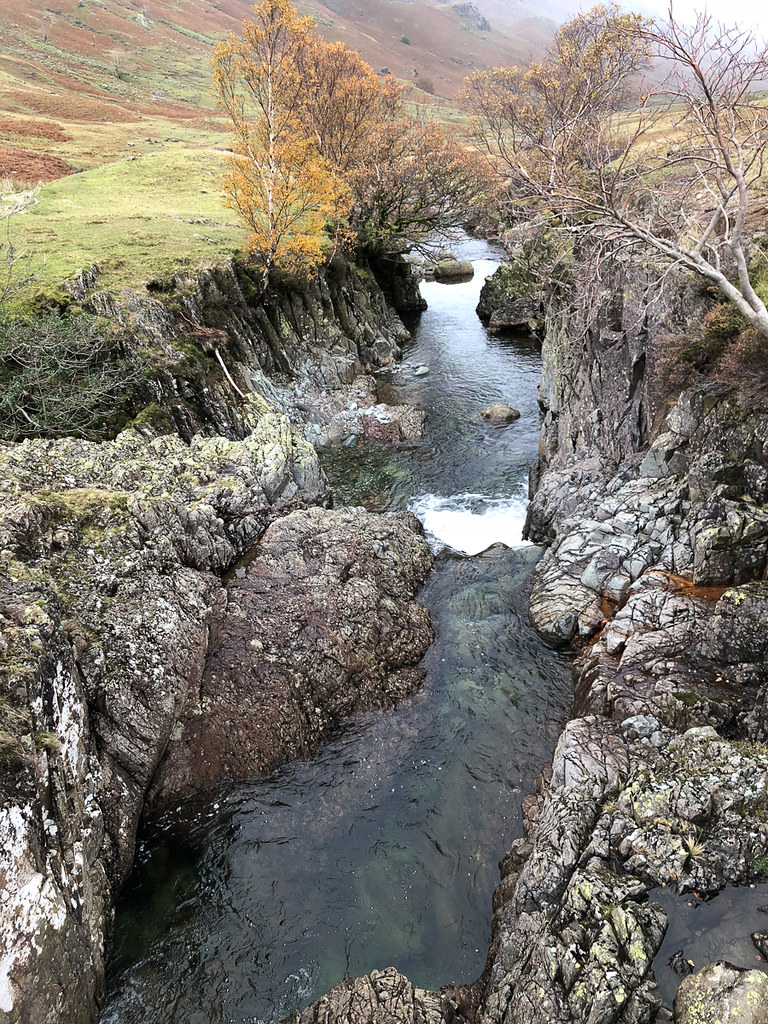 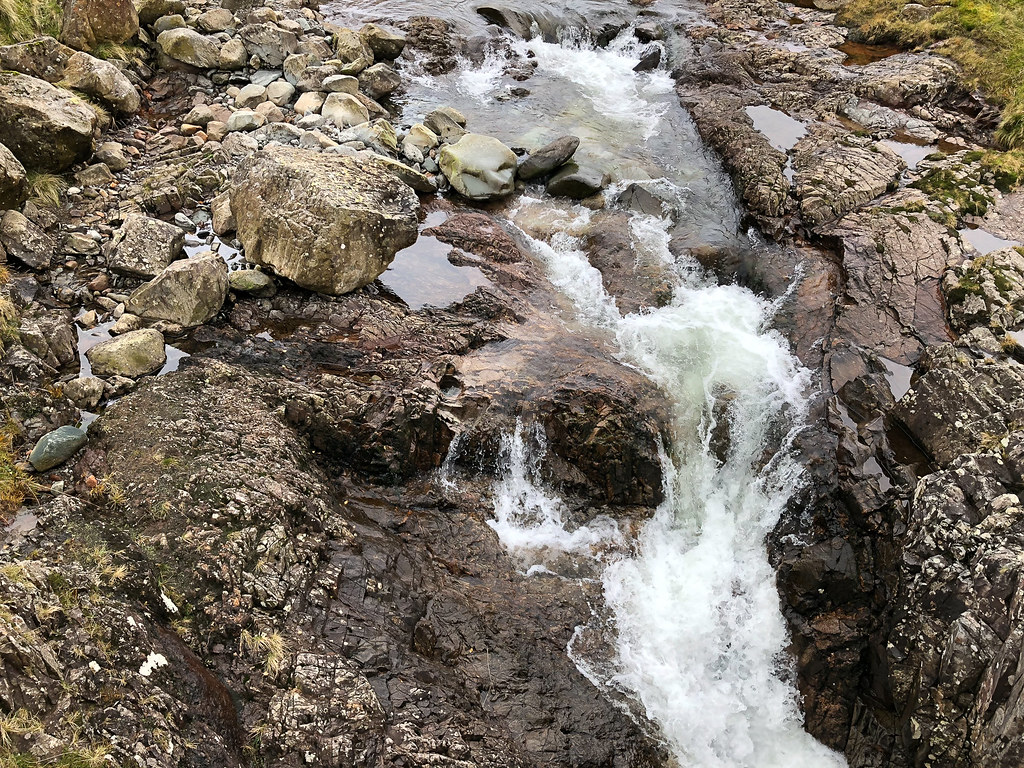 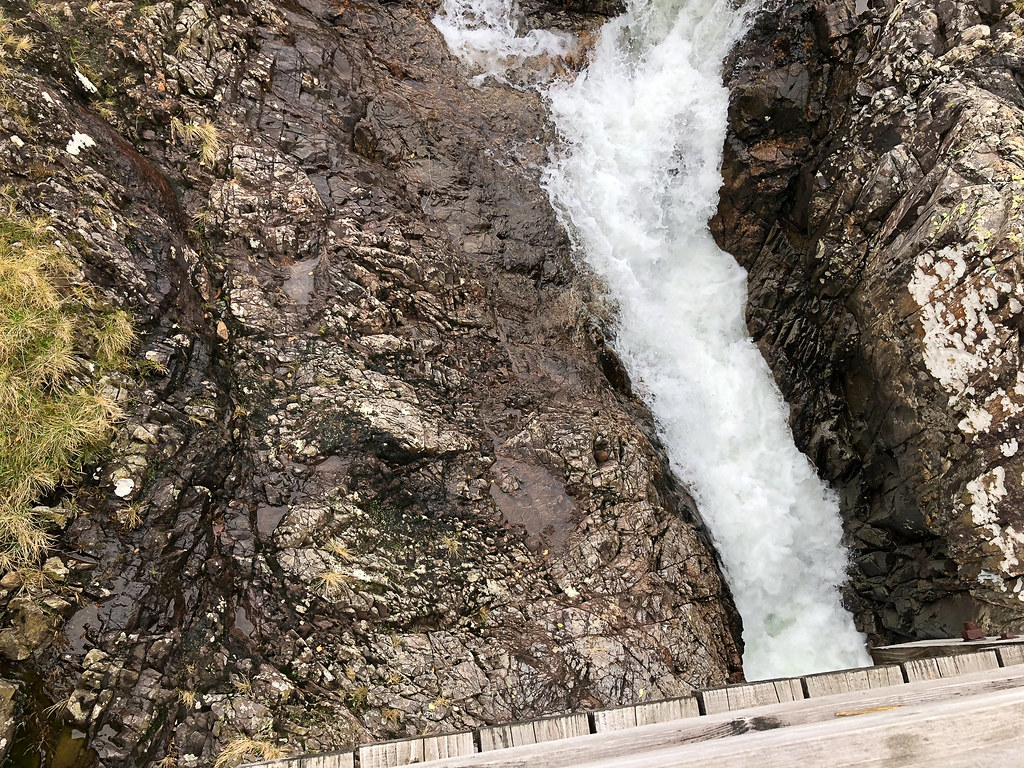 From the footbridge it was quite a trek back to the car - but at least the path was clear. We had had enough of disappearing paths over the last couple of days. 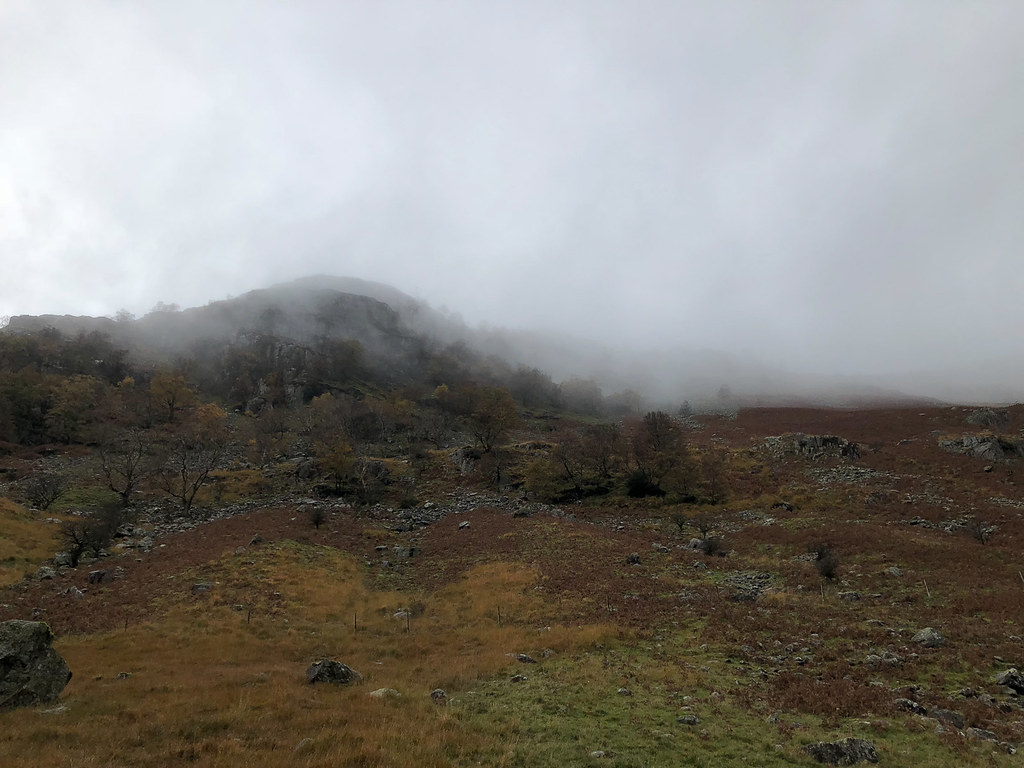 And so ends another week in the lakes, and my first completed Wainwright book. 6 more books to finish off - 34 fells in total - still on target to complete before my 60th birthday.

I'm glad someone else had problems with that wall/wire combination, we had begun to think we had gone astray 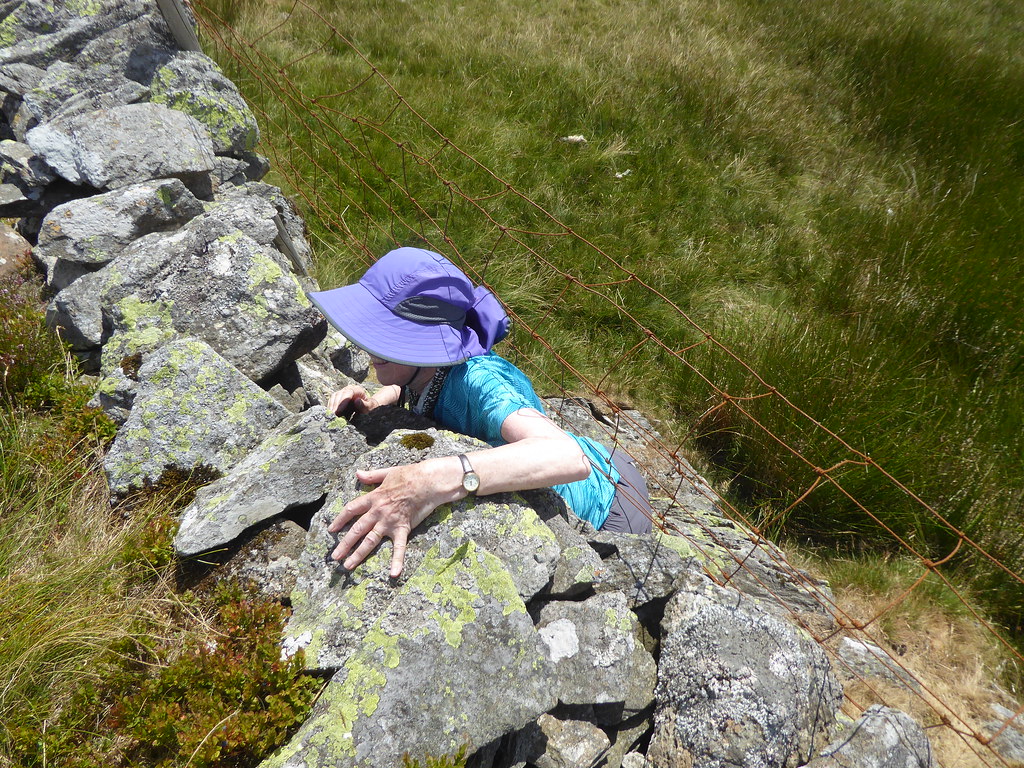 and a fine couple of crags they are

Good walk and great views, just a shame about the clag spoiling them somewhat

You did well to avoid the direttissima ascent of Eagle crag. I climbed these two after High Raise then descended down the end of the ridge without really thinking. It's probably a grade 1 scramble on the way up, but descending with a backpack was a bit dicey. Route shown: 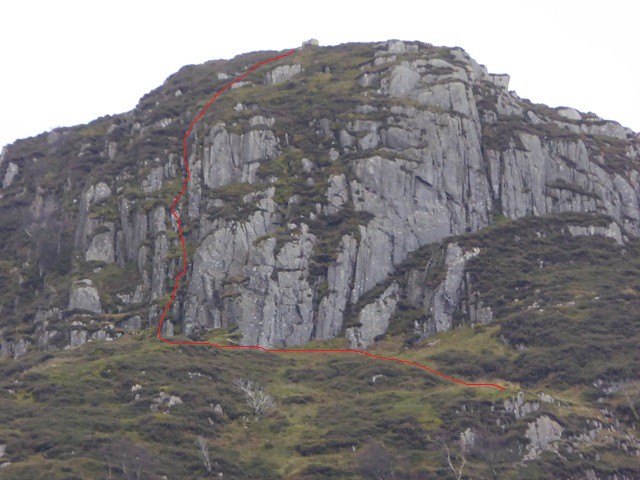 The direct route isn't as direct as all that - it's a while since I was there, but apart from the tiny gully that takes you from the original slope round to the little terraces on the Langstrath side I only remember one actually scrambly bit, although when I was there it was just where the wind was howling round out of Langstrath and I retreated and slithered up slightly rougher ground in a sheltered corner! There's a good description at http://www.wainwrightroutes.co.uk/eaglecrag_r1.htm