Having finally got a good weather forecast we could both take advantage of, we hit the road at 3 o'clock and headed for Kinlochleven to walk 4 of the Mamore range.

our_route.gpx Open full screen  NB: Walkhighlands is not responsible for the accuracy of gpx files in users posts
Booted and suited, we left the car at 8.30 and took the muddy trail through the trees and followed the path over Am Cumhann, to take the path around Sgurr Eilde Beag. The Pap of Glencoe over Kinlochleven.

It's easy going up to the lochan between the Eilde's, and when we got there, a fantastic sight greeted us. 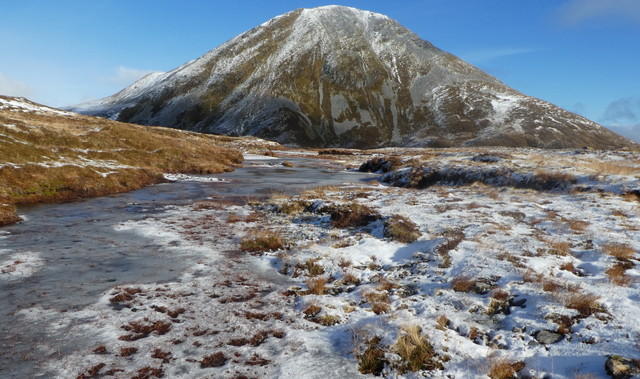 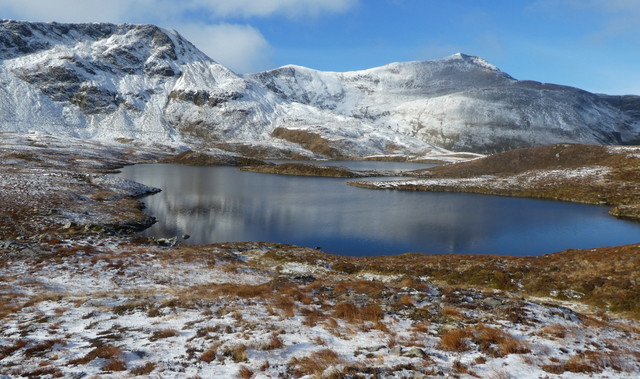 After a quick snack stop, we headed up Sgurr Eilde Mor. After just over 3 hours, we were at the summit. 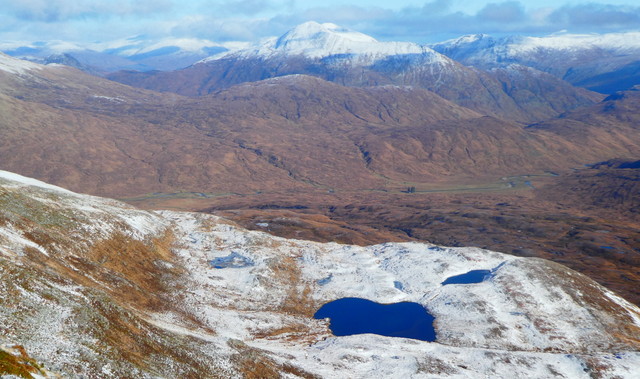 Treig Munro's from the Ascent. We left the summit and headed down the icy scree run, making for the "shelf" path for Binnein Beag. Down to the Lochan.

The well defined path made this a lot easier than it might have been, and we were soon at the lochan between the Binneins. With the icy scree, Binnein Beag took us a bit longer than anticipated, more being careful on the descent. Looking at Binnein Mor, it appeared quite daunting, with no obvious route up, but we watched a solo walker head up the right hand side of Achlais a' Bhinnein Mhoir so decided that was our way too. However, once at the lochans, we decided the left hand, up the scree and grass looked better, so donned our Pogu spikes ( crampons in the car Aonach Beag from the lochans.

This route turned out to be quite treacherous and we were more than happy to have the spikes on. We emerged on to the ridge, @ 60m from the summit, so that was a bonus Looking down our ascent route.

The effort was worth it though, as the vista that greeted us was truly amazing. Clear views all around and we spent ages trying to identify all the mountains around us, even making out Cairn Toul which, as the crow flies, is about 80km away The top of the Mamores. The sun was rapidly falling, so we, unfortunately, had to leave and head for the final Munro of Na Gruagaichean. We had planned to do both summits, but light was definitely against us. After leaving the summit, we headed quickly down Leachd na h-Aire, before heading down to the road we could make out. By the time we got to the road, it was pitch black, the only saving grace was the beautiful night sky, with the Milky Way really prominent. Followed the Mamore Lodge road down to the B863, using the torches on our phones for help

Eventually got back to the car after a truly wonderful day out. ( 5 hr drive home is a pain though

Hi mamoset. Big walk that, especially with a dusting of snow - nice one. Perfect weather and cracking photos

WHAT a day to have for these wonderful hills. That white dusting is just the ultimate.

dav2930 wrote:Hi mamoset. Big walk that, especially with a dusting of snow - nice one. Perfect weather and cracking photos

Thanks dav, was a grand day.

Cheers rh, days like this certainly do make the effort worth it, it's the recovery that gets you later

Alteknacker wrote:WHAT a day to have for these wonderful hills. That white dusting is just the ultimate.

Superb a belter of a day we done this in summer the views are epic, although the decent from Leachd na h-Aire near had us greeting after a long hot day.

Absolutely fantastic pictures. Wonderful day, by the sounds of it.

ScotFinn65 wrote:Absolutely fantastic pictures. Wonderful day, by the sounds of it.

Thanks Scot, was a great day alright!!!