I failed to summit Ben More in 2013 due to a bad cocktail of recklesness, wild weather, and being ill-prepared. This time, Ben More (and Stob Binnein) were kinder and gentler. I am a wee bit older and maybe, just maybe a nano wiser.

Until... I got lost in the first 10 minutes of the hike as I struggled to find the start from Ben More Farm. I approached BMF from my base camp of Ben More Lodge so I was on the opposite way of the car park. If coming from Crianlarich by foot, find the lay-by parking and the little sign that says Ben More. Do not walk onto someone's back garden (in particular, the garden of the house below) where it says Ben More Farm (this advice is more for me than the reader) 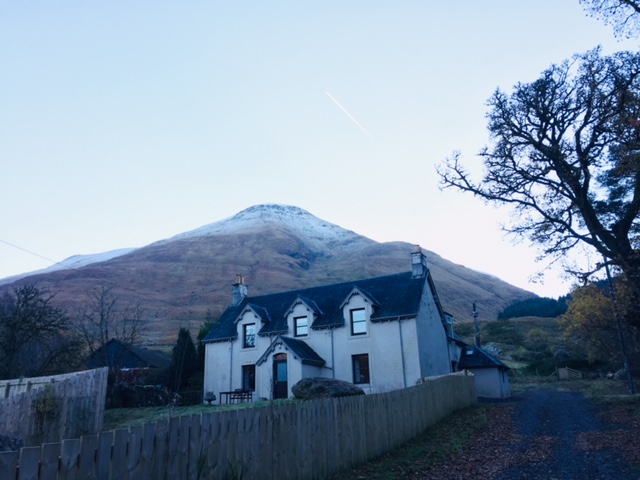 Instead walk a bit further to the lay-by car park.

Anyway, after a few acrobatic moves over a few gates and whilst trying not to feel silly or sheepish (pun ashamedly intended), I manage to find the zigzag track to Ben More sans Farm:- 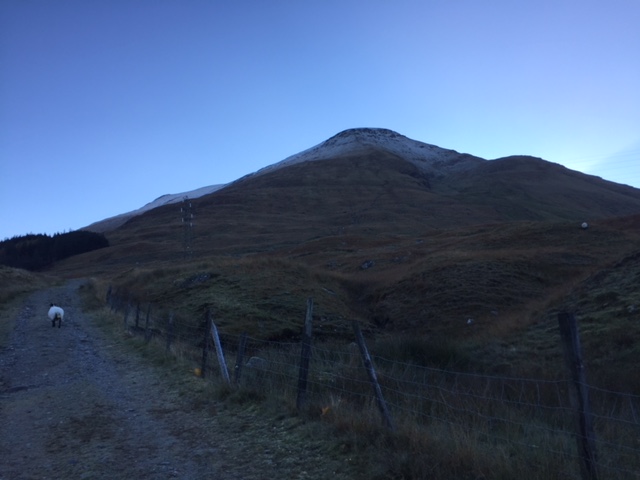 Then I entered the gate as I wished my glutes all the best: 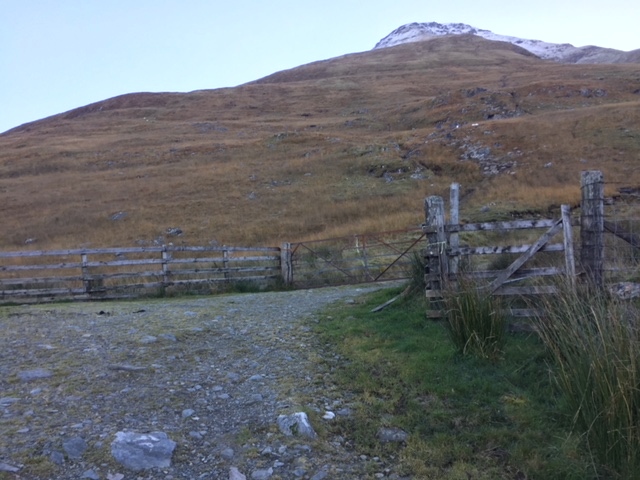 A few yards from the gate, I found the big rock on my left with an obvious path towards the unrelenting looking slope If you wish to see how far this path is from the gate, here's a photo (with a cameo of Ben More's shadow): 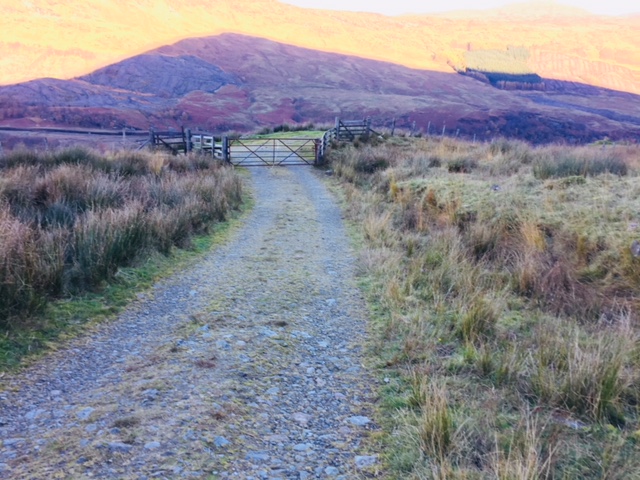 From herein, it felt like a marathon gym class of leg bums and tums with an upgraded view, and relentless ascent of unfinished paths, bogs, and grassy slope. It was an icy morning and I kept slipping during the first half. It got better as I inched towards the summit. 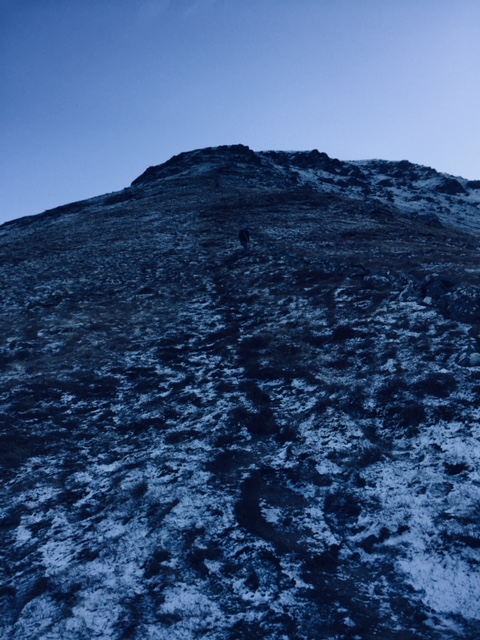 I am not a technical hill walker so I shan't and cannot give exact or erudite topographical narration of the summit approach. I remembered two false summits, and a need to stop by for M&Ms and to enjoy the view. 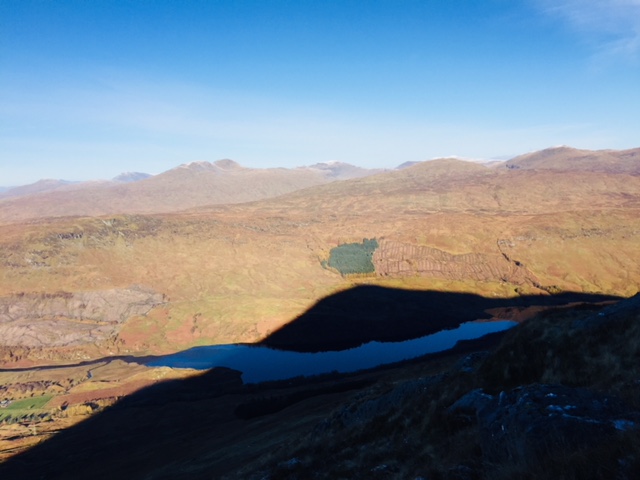 And then the summit Trig and the summit view. It was sublime, hypnotic, and absolutely magnificent. 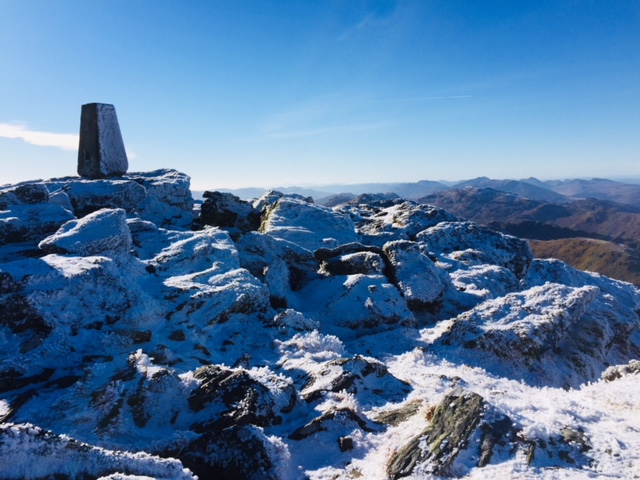 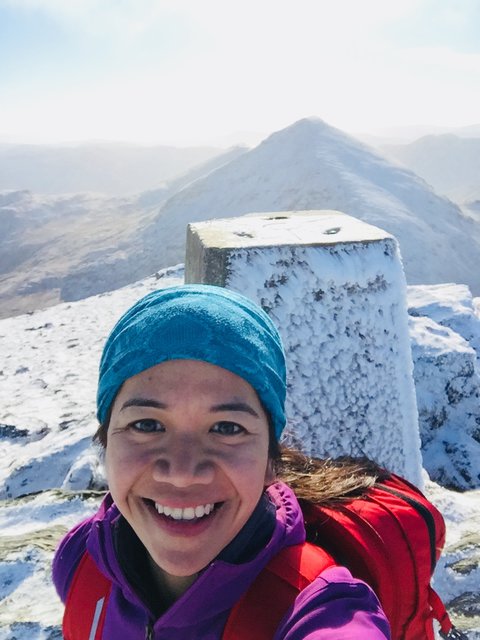 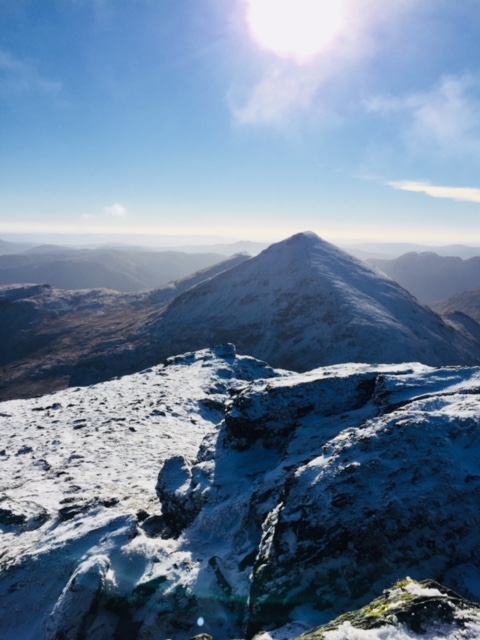 I stopped briefly for refreshments, half of my cheese sandwich, and more M&Ms. Then off I went in search of Ben More's twin. I descended towards the bealach between the two munros 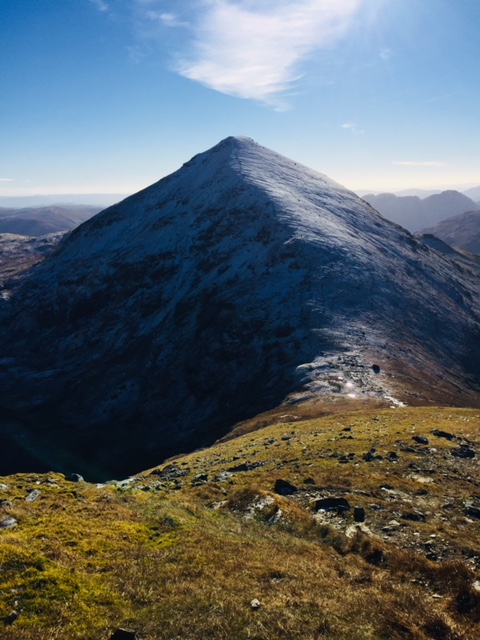 And then the ascent again begins although it wasn't as punishing as the Ben More incline. The weather was great that day and the view from Stob Binnein summit looked very much like an impressionist painting. 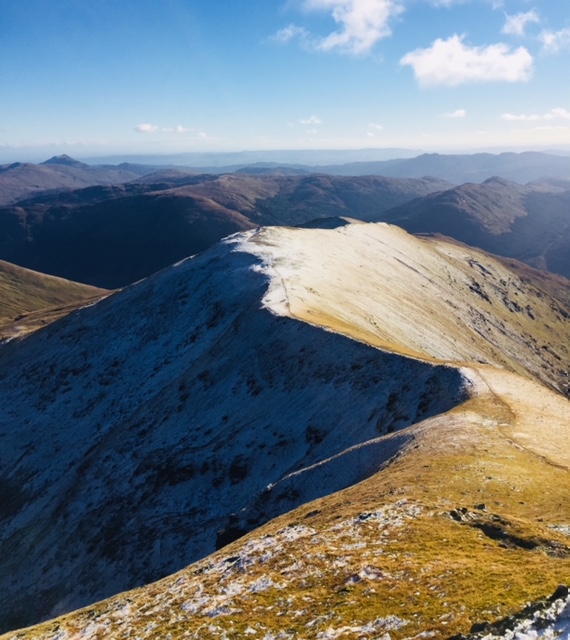 After a few more M&Ms, an energy bar, and a coffee break, I descended back to the bealach and tried to find an obvious path. It was frankly like a where's waldo game until I followed a couple who had discovered a much clearer route down.

It was a tiring but supremely satisfying day of hill walking . There really is something detoxifying about hills and mountains. I felt as if the collective grime of my adulting soul has been cleansed and scoured by 7.5 hours of waltzing with Scottish terrain.

As I walk back to Ben More Lodge, I stopped by Loch Dochart which I believe was looking mighty fine that day. I munched a couple of M&Ms again as I agreed with Mr. Burns: "my heart is really in the highlands". 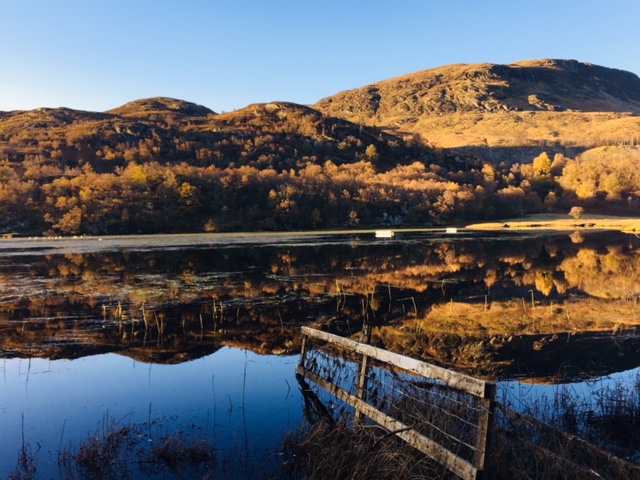 I especially like the "impressionist painting" view from Stob Binnean.

"It was a tiring but supremely satisfying day of hill walking . There really is something detoxifying about hills and mountains. I felt as if the collective grime of my adulting soul has been cleansed and scoured by 7.5 hours of waltzing with Scottish terrain."

Perfectly put - and the supreme satisfaction really comes on perfect days like that.

Isn't that a testing grind up to the summit of Ben More? Sadly on that occasion I didn't see the view from the clag-bound summit!

I found Ben More an unrelenting grind - so steep. I came down off the back which meant several bum slides too. The top was great and across to Stob Binnein was fantastic - the journey up and down I didn't enjoy so much.

Looking a bit different from when I was up a few weeks ago! Love the photo of SB's south ridge.

Thank you dogplodder! I was lucky with the weather

Thank you razzah! I agree - it was quite challenging but well worth the view!

Thank you alteknacker! It was very testing at times though I really did feel detoxified (metaphorical grime fell off as it was pulled by gravity in that relentless climb!). Nonetheless, it was well worth the Monet-esque view from Stob Binnein

I have stayed so often at Crianlarich but every time, I give these two hills a miss, due to their daunting steepness. However I will have to give them a go next time!