For once, the fact that I ended up in a completely different place from the one I set out for was not my fault - I was at Haymarket to catch the 8:04 train to Glasgow and the 9:15 bus to the Rest and Be Thankful, only for the train to be cancelled, and since that didn't really leave me time to get into the west with the earlier night, I decided to head along to Waverley to catch the first Galashiels train instead.

I had been hoping that the weather would hold out long enough for me to get in one last Munro, but with another wild and windy Saturday and snow on the higher hills I had looked back to the Borders, it being a tradition of at least two years now that I head there the day the clocks change to stock up on light - before being distracted again by a perfect forecast for the west and the lure of a quick Corbett.

Reverting to plan B meant demotion again to a Graham, but that was fairly incidental - I was Donald bagging if anything, and not really doing that.

At Gala I only had a few minutes to wait for a bus to Innerleithen, where I had to find the bridge and then walk up a road beside it, past some churches and a fancy hall to cross an old bridge into woodland paths. 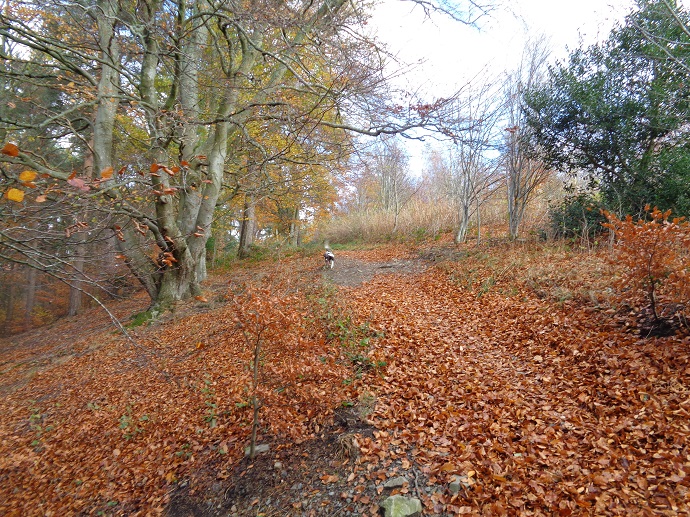 (The Unexpected Spaniel turned up in between me thinking about taking the photo and actually pressing the button - I like the way the dog is fairly clear but the tail is just a blur of wag!)

Beyond the first trees the path led along the side of the ridge, with a very steep wooded hill ahead, and a nice bare looking hill on the other of the valley. 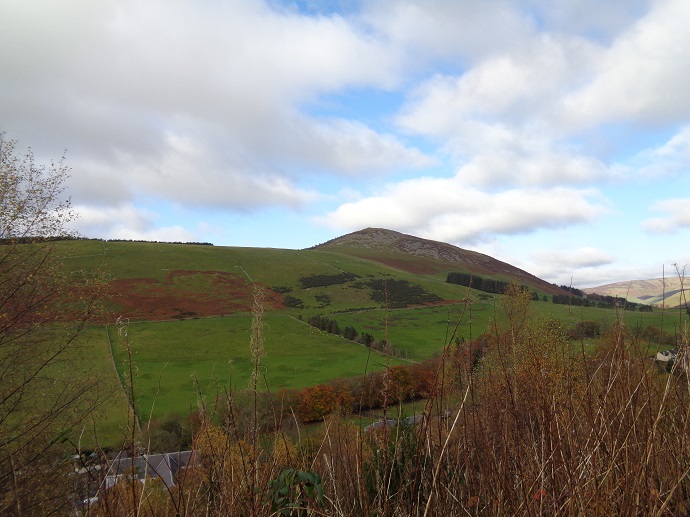 According to the instructions I was to take a path marked in red up to the little hillfort, but when I came to the junction the only marker was blue, so I went on too far at first, until I decided I was definitely going the wrong way and retraced my steps. 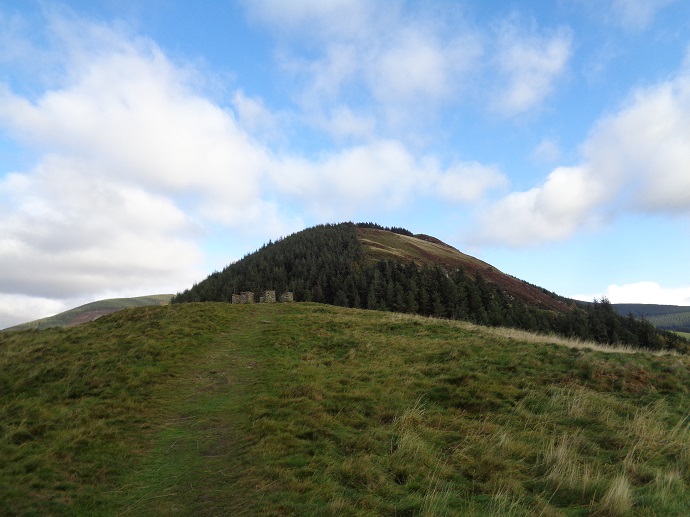 The hillfort was a lovely little viewpoint, as they usually are, looking down three valleys and with carved slabs depicting scenes from local history. 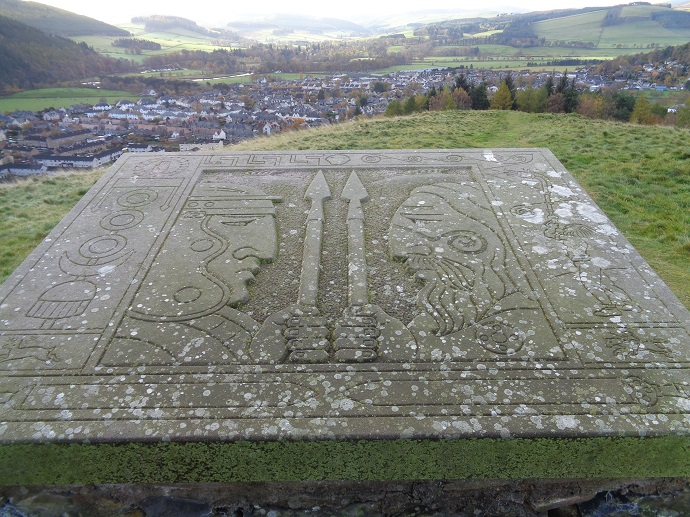 The descent down to the dip was pretty steep, but the climb on the other side was much easier than it had looked from a distance, slanting across the slope and going on through conifers with the saving grace of occasional larches to make them look autumnal. 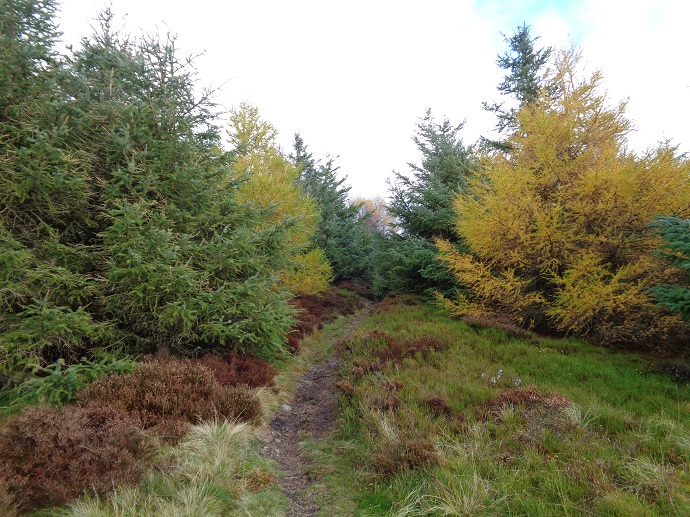 The path crossed a bit forestry track and headed on into more trees, before leaving them for open ground just dusted with the remains of snow - I knew that it had been snowing in the north, but was surprised to see it at this level down here. 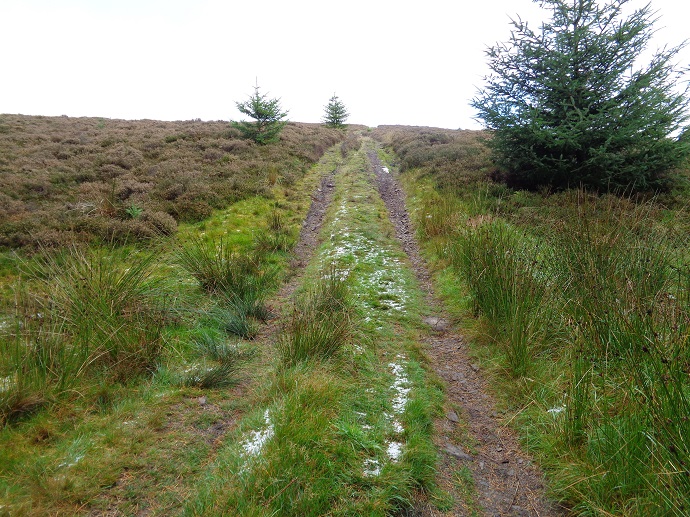 As I came over the next rise I joined mountain bike world - they obviously had another way up, somewhere behind me to the left, but once up there were little clusters of them all over the place. 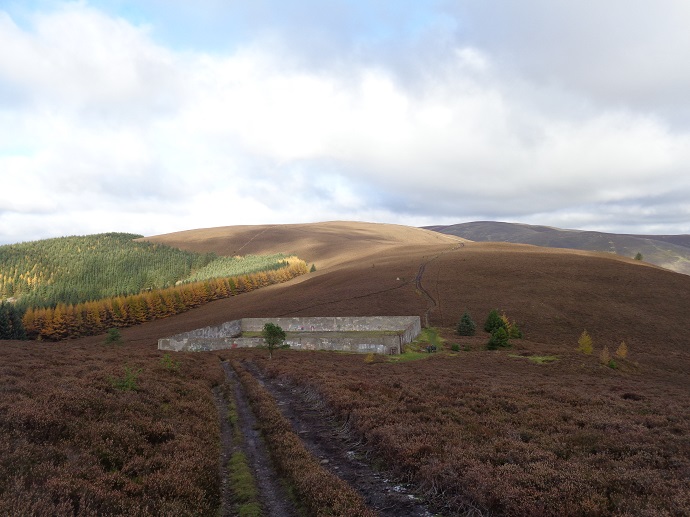 Views along the ridge

There are the remains here of a little reservoir, obviously completely artificial, and breached quite thoroughly - hopefully deliberately. 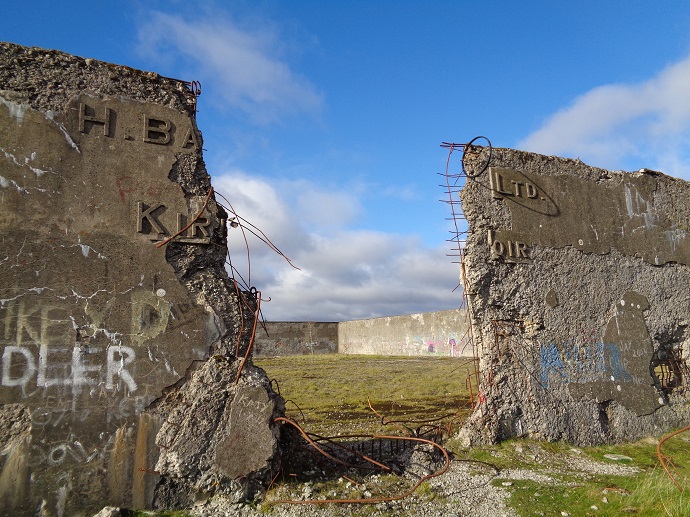 Beyond that was a slow climb on a broad path which would have been quite pleasant if the bikes hadn't made the track quite so muddy - I found I was always dotting about from side to side to find a walkable bit. 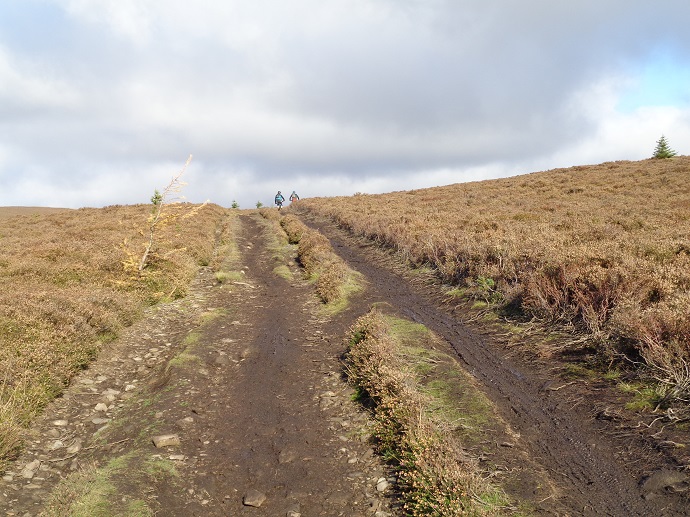 There was a good view again to the other side of the road, where a little valley was winding away into the distance - probably to nowhere very exciting, but it did look nice. 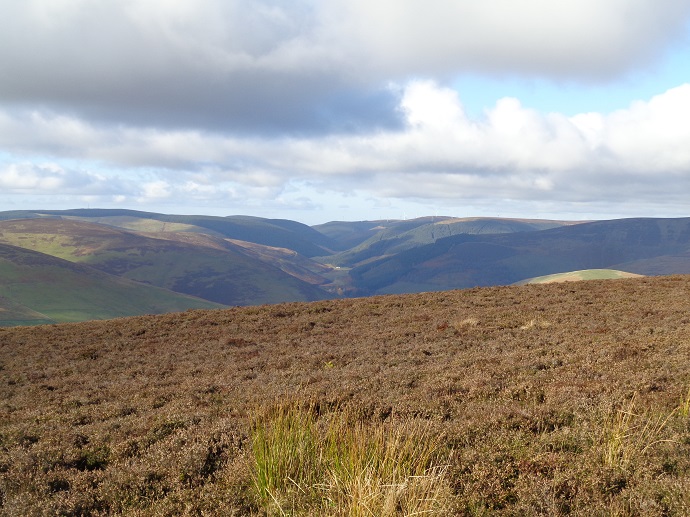 At the top of Priesthope Hill the mountain bikes vanished equally suddenly. On the far side there was a choice of a tiny very steep path shooting down by the fence, or a slightly less steep track slanting into the trees - I didn't trust the track not to turn to bare mud, and kept to the path, or at least the heather beside it. 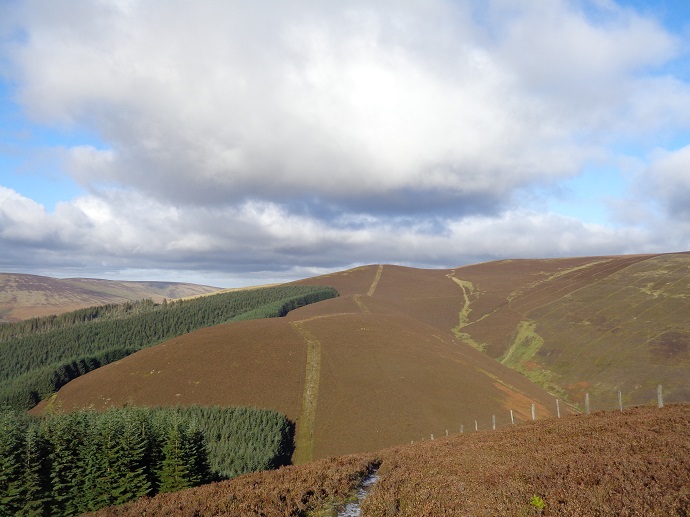 On the other side of the dip a stony track led up not quite as steeply - beyond that the track was clear but rougher, looking as if it had been mown into the heather, rather than trampled.

At the top of the little valley a web of green paths crossed the hillside, but I wanted a top to eat my lunch on, and stuck to climbing by the fence - I did get a good view, but also a very cold wind! 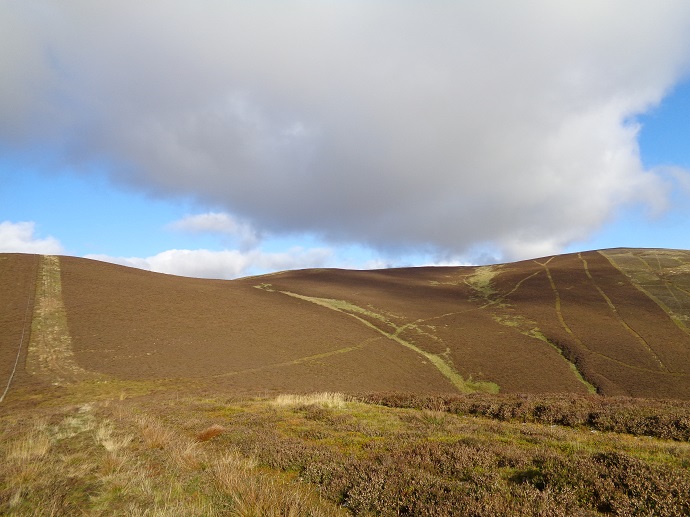 After turning the corner at Glede Knowe I found I was meeting snow again - just enough at first to be decorative. 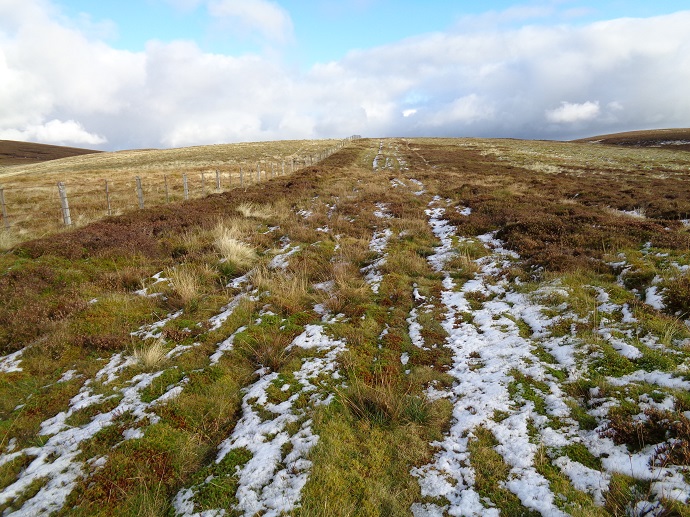 Snow in the track

Further on the ground was much wetter, and when I crossed the fence to what looked like a better track it was actually worse - the deceptive half-frozen ground that holds for a moment before letting you down. 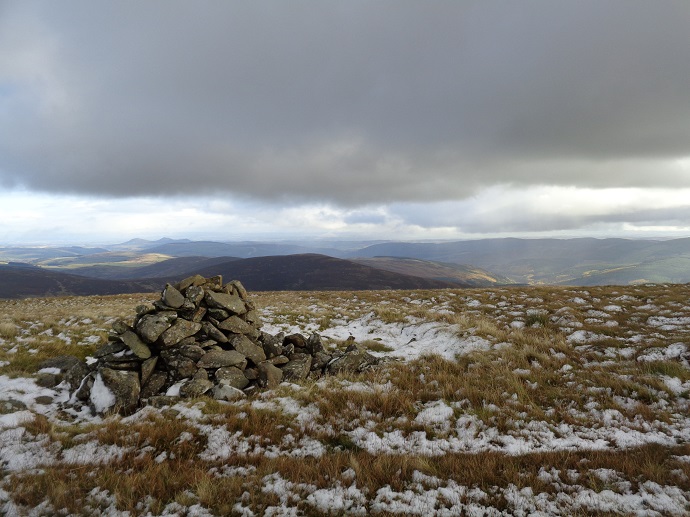 The first part of the walk had been good, on a nicely shaped ridge, but now it was starting to feel like a very long way to the summit - rough and wet and cold, and a fairly flat expanse. 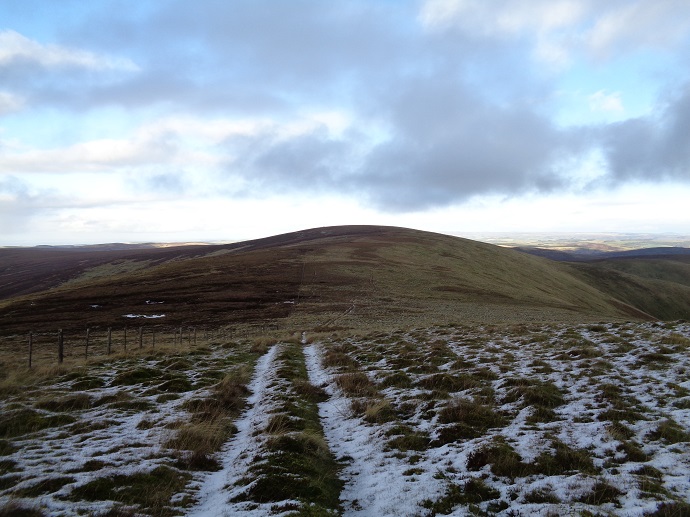 By the summit the sun had come out again, at least - a nice enough spot although unexciting. 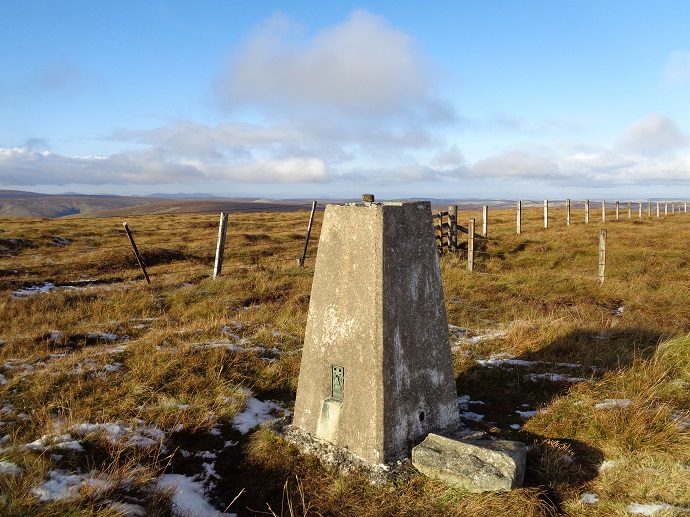 With all the flattish ground the views were mostly lurking away round the edges, but the view towards Eildon was still the best of them. 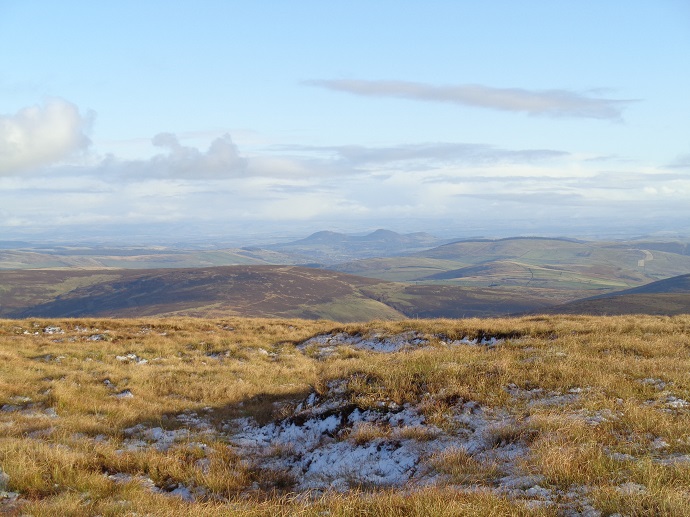 Not only was I feeling reluctant to trudge back over cold wet ground to reach the return route, I didn't much like the idea of steep and overgrown forestry paths further down the other leg of the horseshoe. The 'bagger's route' down to the road at Blackhopebyre might be a boggy plod, but it was a relatively short boggy plod compared to the trudge over the tops.

I didn't have OS map for most of the bit to the west, but I knew there was a track further down Glentress Rig, and although there wasn't really a path at the very top the fence was an obvious line to follow - even if I did get the impression that my descent was being monitored. 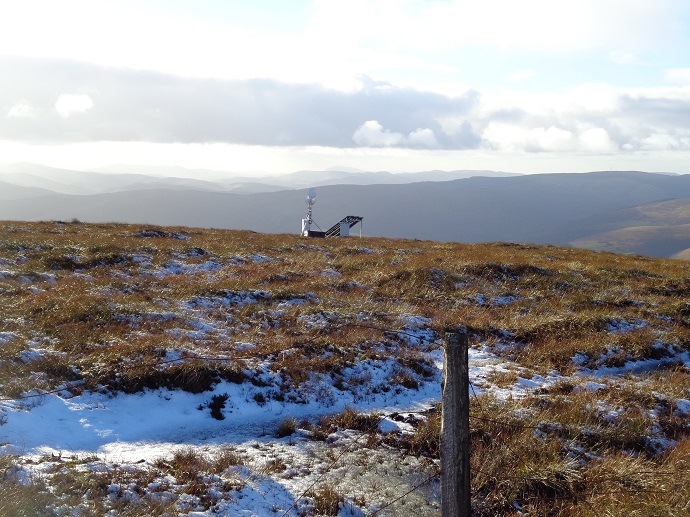 Before long there was a clear path on the other side of the fence, which I crossed to follow - not that it was much use for walking in, being merely a convenient hollow for holding snow, but it was a useful guideline.

The descent wasn't quite as pleasant as it looked, because the snow wasn't actually gone, only slipped down to hide between the clumps of heather - but it was absolutely gorgeous ahead, curves of hills glowing in the sunlight. 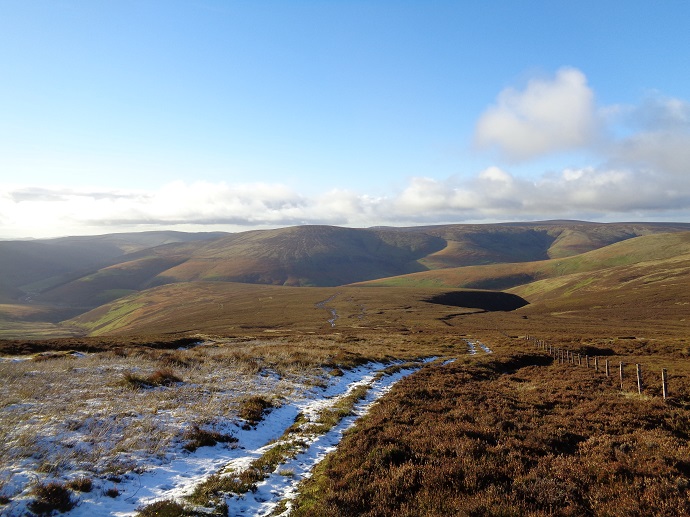 The path led down past a series of grouse butts, and then I was below the snowline and onto flatter ground where I could walk along the track - it was wet in places, but not nearly as wet as it had been up along the top. 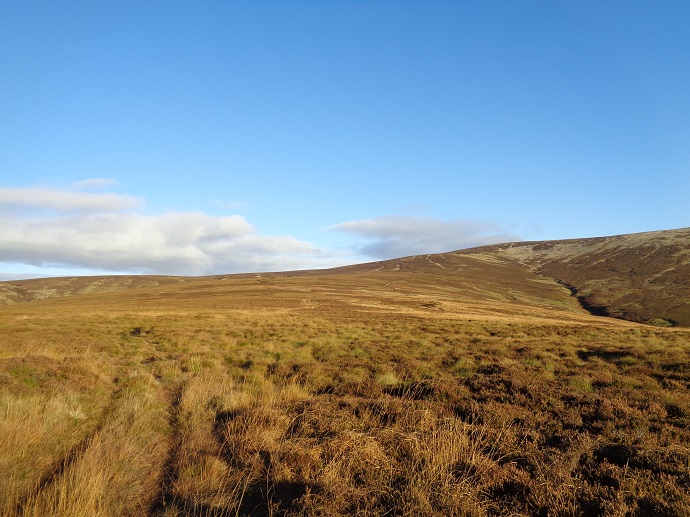 Hilltop Knowe by the roadside and the hills beyond it were a very pretty view to descend towards, but useless as a photo, because the sun was directly behind them. Just before the little top the track swung back on itself to head down to Blackhopebyre, which had a lovely setting - I didn't really want to head north, but there didn't seem to be an easy way out otherwise, so I followed the track down for a while before cutting over to the road. 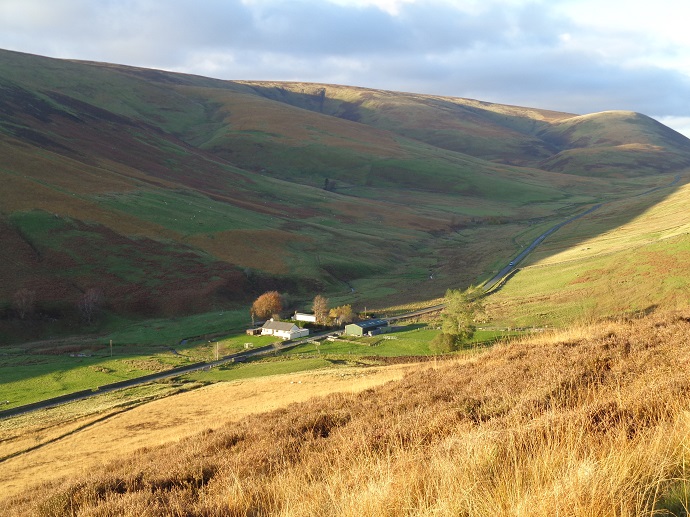 I knew I had quite a long road walk ahead of me back into Innerleithen - I wasn't sure just how long, because of mapping inadequacies, but I didn't think I'd make the 5 o'clock bus even if I hurried, so didn't bother to hurry.

And I love a valley road, especially one that winds along with a new view round every corner. Past a slope with birch trees the next place was called Glentress, although presumably not the Glentress where people throw themselves down hills on bikes, because no one seemed to be doing so. 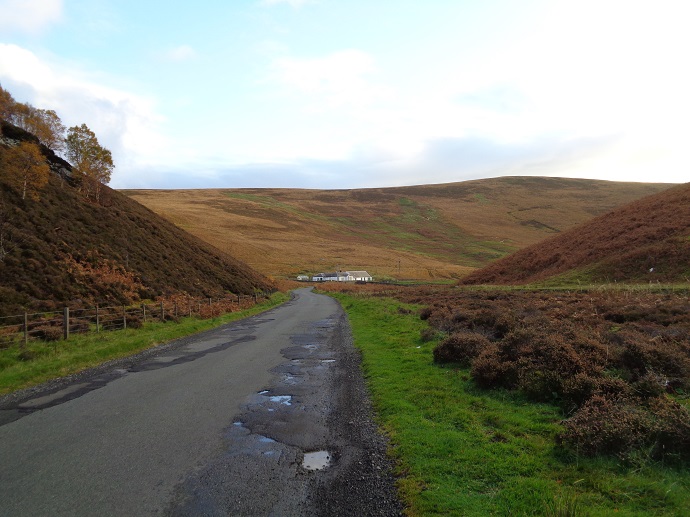 At Whitehope there was quite a cluster of houses, more a hamlet than a farm, and then I was walking right by the side of the broader burn. 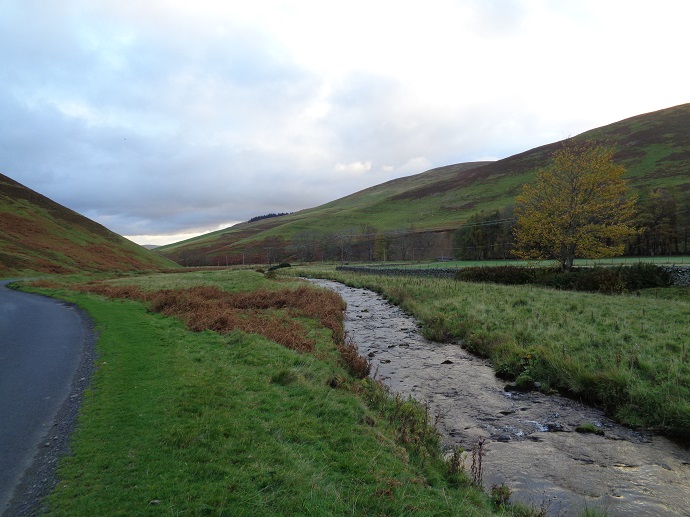 Another building at Colquhar was very pretty, and one called The Common a bit odd. I couldn't figure out what a gauge on the road was for, either - it looked like the kind you put in rivers to measure a flood, only well away from the river, and on such flat ground all around that if there was enough snow to register there would be no way of getting to the gauge to read it - anyway, I thought snow gauges go on high places. 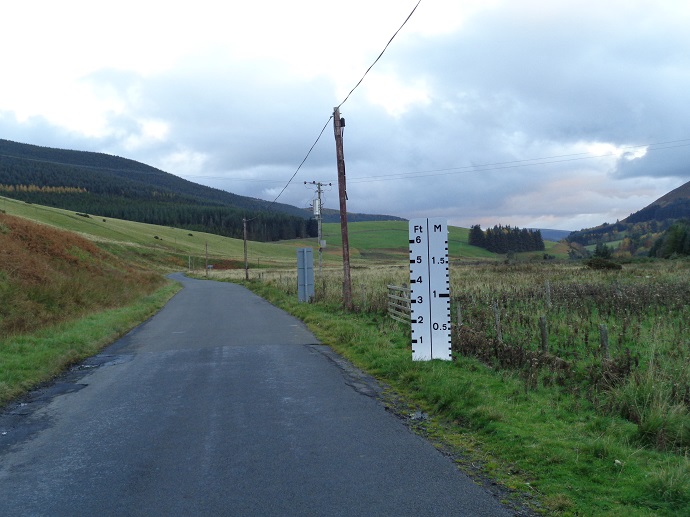 The next building, a bit surprisingly, was the golf club - but the valley had got much broader and flatter, and once over a bridge it wasn't long before I met the first houses of the village just as it got dark - maybe I would have caught the earlier bus if I'd hurried from the start, but there wasn't much need for it.

With a while to wait I went along to the Traquair Arms - which had a lovely fire - to drink tea, but as they had quite a fancy menu which I wasn't really in the mood for, stuck to the plan of going back to Gala for dinner before getting the train home.

Some lovely Borders scenery, but the lower parts of the walk were definitely better than the higher parts.

Nice report for the highest Moorfoot - I am hoping to get down to that area next year and mop them up. Not once ever thought of walking in from Innerleithen but from your report it doesn't look too exhaustive. Even one Graham can be better than a missed Munro and Corbett!

Excellent Plan B. Love your first pic, it is just so autumnal. I did Windlestraw Law by myself, as husband didn't feel like repeating, and when I arrived found that I only had a 5 miles to the inch map, so knocked on the nearest farm door on pretence of asking if parking was OK, and "mentioned" that I was doing it with a rubbish map, so he loaned me one. When I got home I discovered Landranger map in one of the not-map pockets in my rucksack

Pretty long walk from I