Track_2018-11-01 164253.gpx Open full screen  NB: Walkhighlands is not responsible for the accuracy of gpx files in users posts

Last time I was in the Cairngorms I didn't enjoy it. Once out of the forest at Linn of Dee I found the hiking pretty boring. Why did I go back then? Well, the family holiday was in Kirriemuir this year and, having done Mayar, Dreish and Mount Keen the next closest was one of the Munros from Linn of Dee. More importantly it was an opportunity for Manda, Bauer and I to have some quality time and spend a day together doing what we love.

I'd originally planned to do Ben Avon however with the lack of daylight that wasn't an option without bikes to shorten the time. I searched about the map and found Carn a'Mhaim, 6 to 7 hours so at worst we'd be on the long walk out as it got dark.

Despite the forecast for a cracking day, the car park at Linn of Dee was very quiet, in fact we saw a grand total of 5 people all day! We set off just before 10am along the path towards Derry Lodge. It was cool but with little wind and the sun beating down it was a very pleasant walk through the forest and along the river. As soon as we cleared the forest we could see the Cairngorms far in the distance, particularly Derry Cairngorm and our target Carn a'Mhaim. I remembered biking this the last time and it was so much easier but the bikes were one thing too many to take on this holiday, the car was already chewing through diesel thanks to everything that had been packed. Don't get me wrong, the walk was great. The dog was running about crazy, typical Collie, and Manda and I were really enjoying the scenery and the chill out time. The snow really made for a spectacular vista but I was concerned about how much there would be. The forecast was set to be good though so I didn't have to worry about that closing in, hopefully.

We got to Derry Lodge and both commented on what a waste of a cracking building this was then crossed the river and continued west. It was easy going, a bit boggy just after the river but apart from that a cracking path to follow. I love the ancient pine forests, so atmospheric and we commented how a lot of the trees looked like Treebeard and the Ents from Lord of the Rings.The path could still be cycled if you were a half decent mountain biker but as we approached where we had to cross Luibeg Burn it got narrower.

We had two options here, turn north for a short distance and cross the burn using the footbridge, or risk it for a biscuit and hope the river wasn't too high and we could just hop across the rocks. It hadn't rained too much in the past few days so we took the risk. I went first, got half way across then started eyeing up my next rock. If I didn't hit it perfect I was getting a very wet foot. I stood, trying to gauge the jump. Manda meanwhile took a hop skip and a jump across some rocks just up stream from me. Yup, that was the better way so I followed suit. The autumn / winter contrast here was stark. 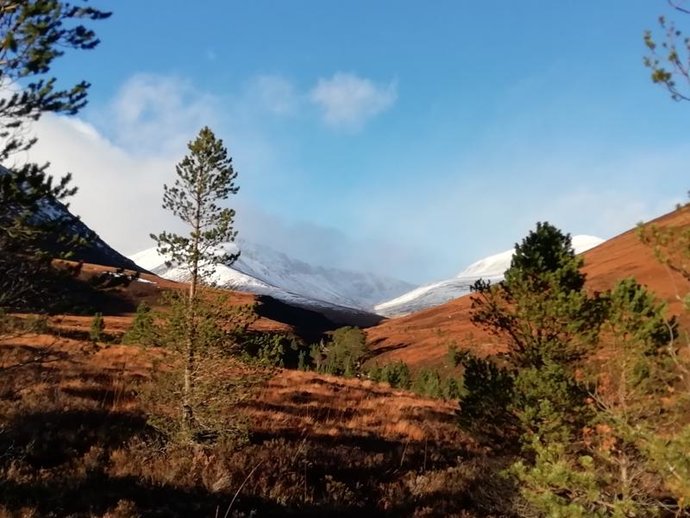 At last we started to gain some height here as we approached where we would turn north and start heading towards the summit. Once on the ascent it was quite a change in pace. For 5.5 miles we'd been wandering along the river, now it was straight up the hill. Thankfully there was a really good path still, even a staircase in places. Before long the snow was coming in big patches. Bauer was loving it. He was tearing ahead and once the snow began to cover more, the landscape was essentially black and white making it very hard to spot him. Unfortunately my poor training methods mean that anytime he sees snow he expects me to kick it towards him so he can try to catch it. No way I was doing that on this slope and every time he dislodged a bit of snow he would chase it down the slope himself, who says Collies are smart? By now the view north was opening up. I've read so much about the Lairig Ghru and the Braeriach traverse has been on my to do list for a long time. It looked stunning in the snow bit the cloud was hanging about the summits. I hoped ours was still clear. We met a guy on his way down. I asked him about the summit conditions. He said it was great and I probably wouldn't need crampons until near the summit, Great, as I haven't got any........

Must've been about 800m before the slope eased off. By now we were well and truly in the snow. It wasn't that deep at this point but the climb had taken it out of Manda. She was slowing down. We weren't in a rush, had plenty of time and a headtorch if it started getting dark. 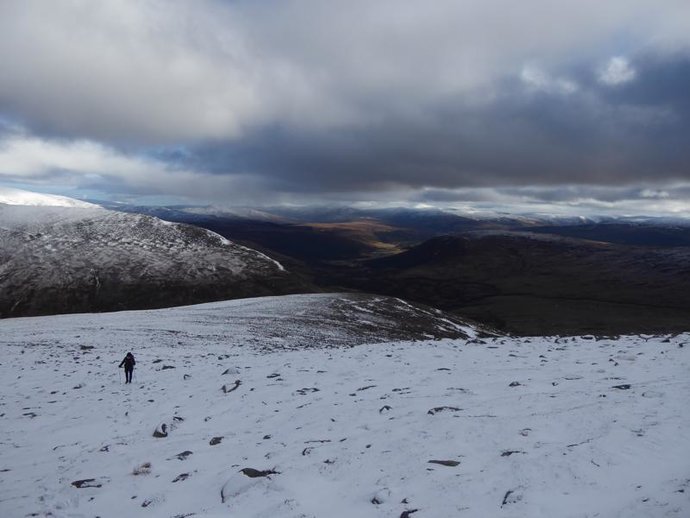 Navigation was easy enough here. We could see where the path was as there was a kind of depression in the snow. Plus we had all the navigation tools and footprints to follow. The snow got gradually thicker and I fell up to my knee a couple of times. Manda did too. She told me she was done and for me to go for the summit. We were literally 200m from it. I was reluctant to leave her but she insisted, was warm, had loads of gear and food so I said I would get there then come back. The last bit was hard going. The snow was deep but fairly solid and was easy to walk on.

The views from the summit were superb. The snow made all the difference for me, plus the huge gouge of the Lairig Ghru. 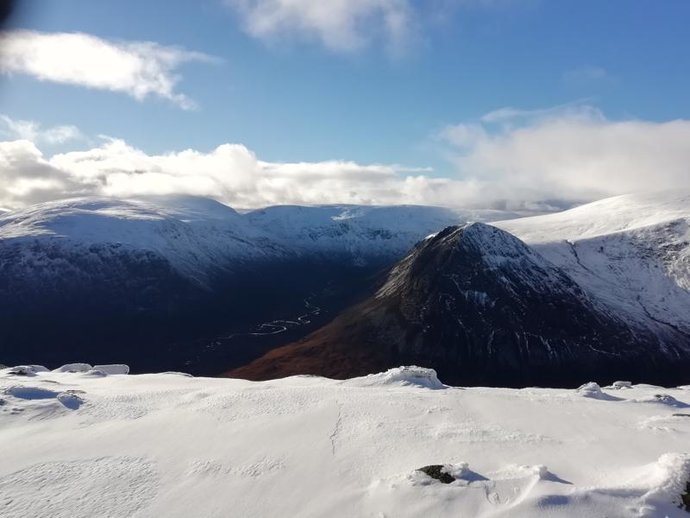 I spent maybe 10mins here then started to head back the way I came. As I walked back towards the last ridge of the summit I saw Manda pop over. Not going to lie, I had a proud hubby moment here. I was so pleased, and impressed, that she'd dug deep and found the energy to make it. When I left she looked done but she's a determined person and somehow got there. I shouted that the summit was just behind me, walked over to her and we both made the summit together. The weather really changed, the cloud lifted and everything brightened up. 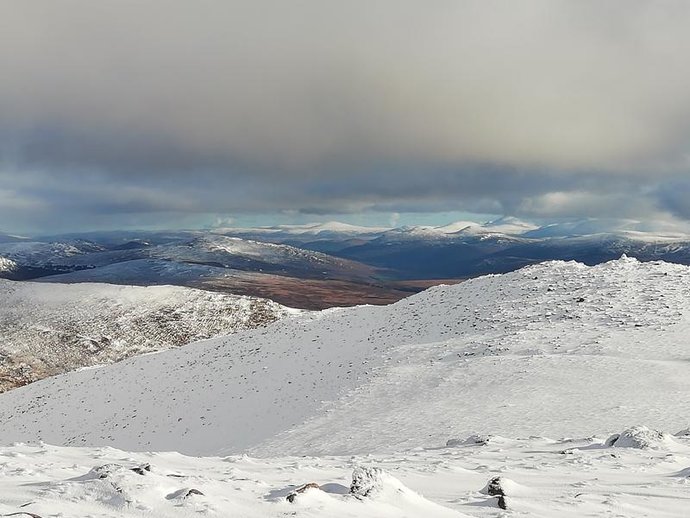 It was actually quite comfortable at the summit. I didn't feel cold despite not moving much. What was amazing was how quickly our footsteps were disappearing. There wasn't much wind but just enough to create some spindrift that smoothed the snow over.

Simple task of retracing our steps all the way back to the car, which was 7.25 miles away........once we were out the snow it was quite warm but once in the valley it was freezing in the shade, literally. I didn't seem too bad getting back to the lodge but the last 3 miles to the car seemed to take ages. I remembered cycling this with Lee and chuckling inside at all the people who were walking it. That's karma for you.

Re: Digging deep in the Cairngorms