Regardless of the condtions, there was never going to be any hills on the agenda this weekend, as the other half and I had planned to get the train to Edinburgh to do some christmas shopping and socialising. However, after having lunch with my sister, we decided to go for a short walk in the general direction of Arthur's Seat. Gill (the missus) wasn't really taken by the idea, so went off to do some more shopping. Laura and I headed back to her flat so she could change into her walking boots. As I'd not planned to do a walk report, the photos are on my camera phone, and therefore a bit grainy. The atmosphere was just too impressive not to write this up though.

Handily, she lives just around the corner from St Leonards, so we were well placed for Holyrood Park. I should have guessed what I was in for when I almost slid over walking along the pavement!

Arthur's Seat from near St Leonards: 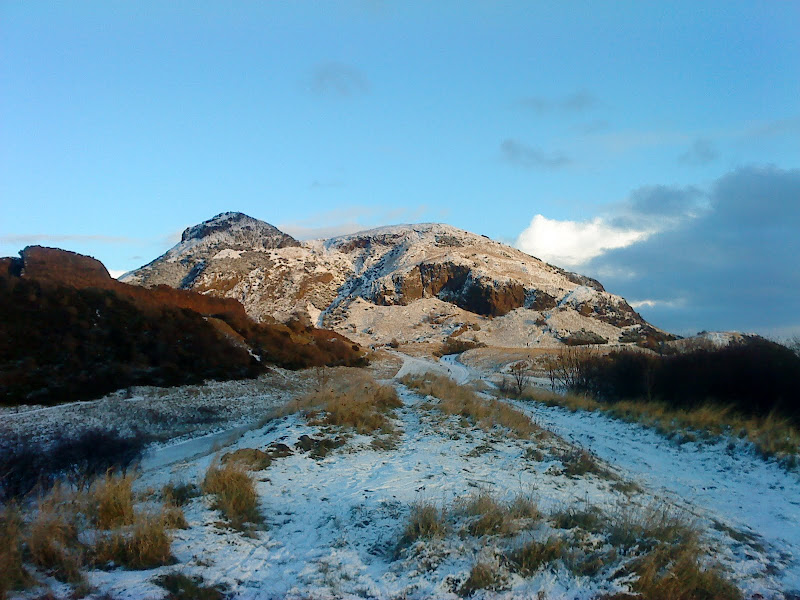 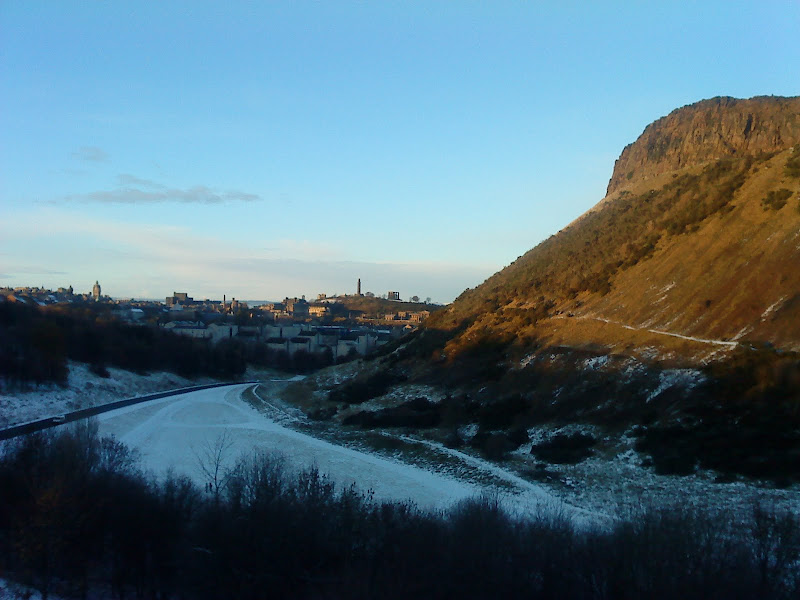 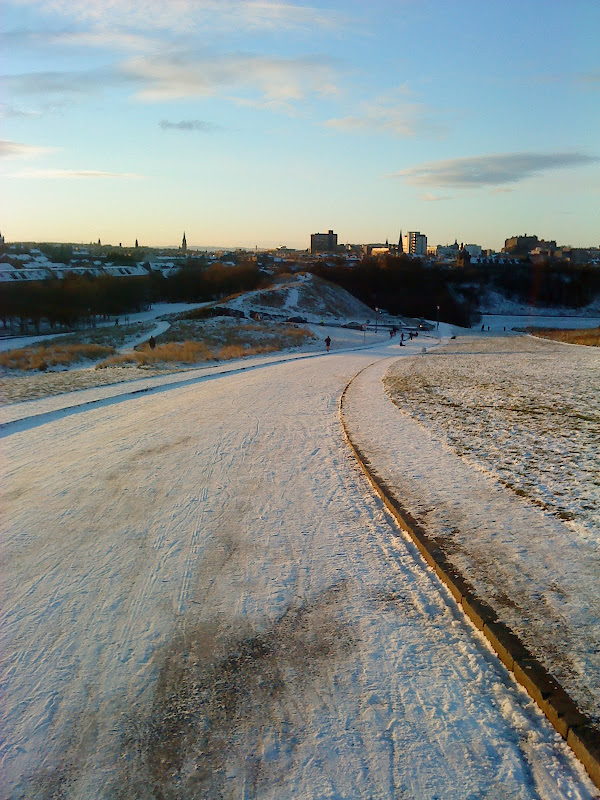 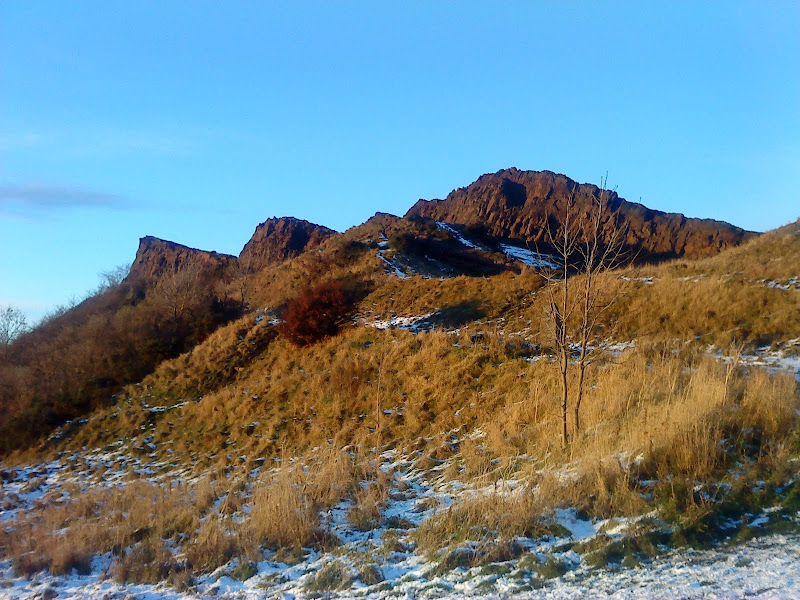 As we made our way up Queens Drive, we were trying to agree on a destination. I suggested the top of Salisbury Crags, while Laura preferred the path under the crags. As this was in the shade somewhat, we decided to go for Arthur's Seat itself. We knew it would be a bit awkward in the fresh snow (nicely compacted by dozens of feet into a skating rink!), but we maybe didn't realise just how awkward!

Edinburgh and Fife from the climb: 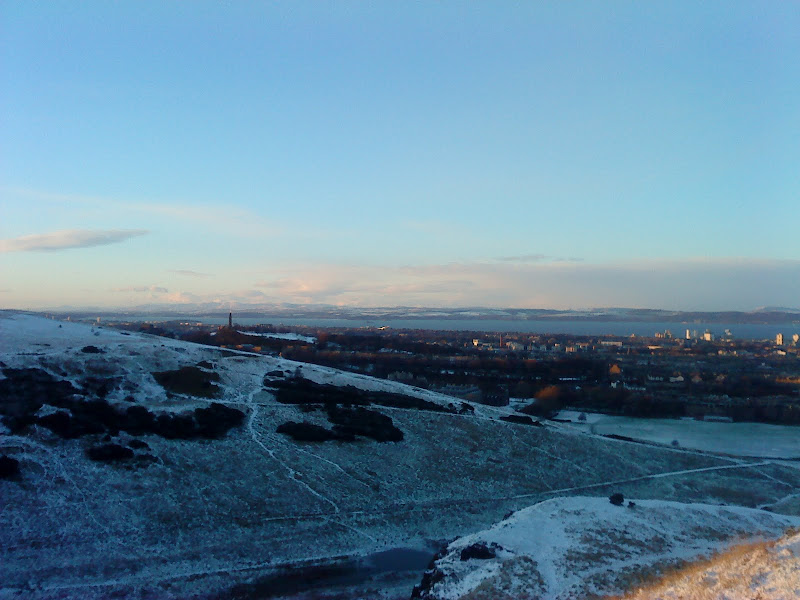 We dismissed the steep zigzagging path up the west face and worked our way round to the north flank. The steps were actually OK, as at least they were level. It was the sections of sloping path in between that made things awkward. Despite this, the whole hill was absolutely heaving with people, sliding around with their Jenners shopping bags and inappropriate footwear

. I'm not about to have a go at anyone though, as I was hardly dressed for the walk myself, wearing jeans and the smoothest soled Doc Martens you could possibly find

. Mind you, I couldn't help but note that Laura was sliding around almost as much in her walking boots.

The summit was impressive, as we had arrived just as the sun was about to disappear behind the Pentlands, and there were some atmospheric snow clouds drifting about just waiting to dump another load. Standing up on the summit rocks was a challenge in itself. 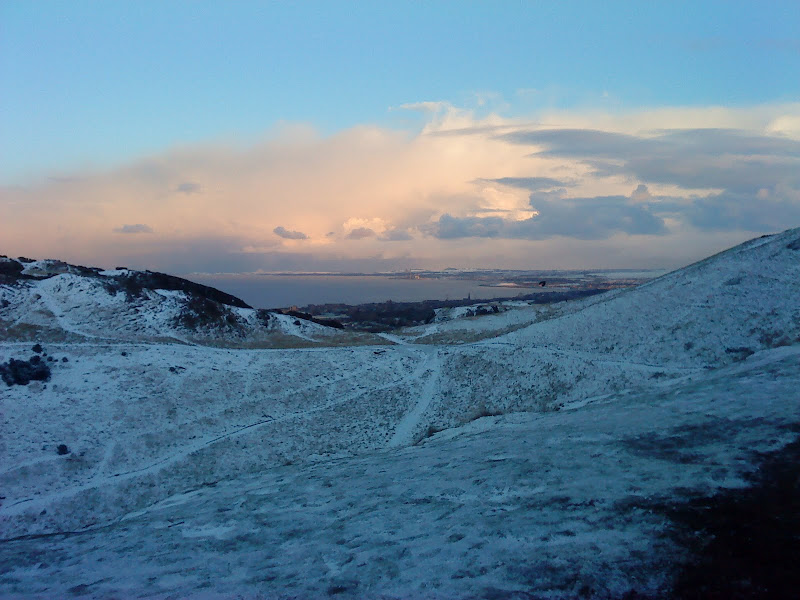 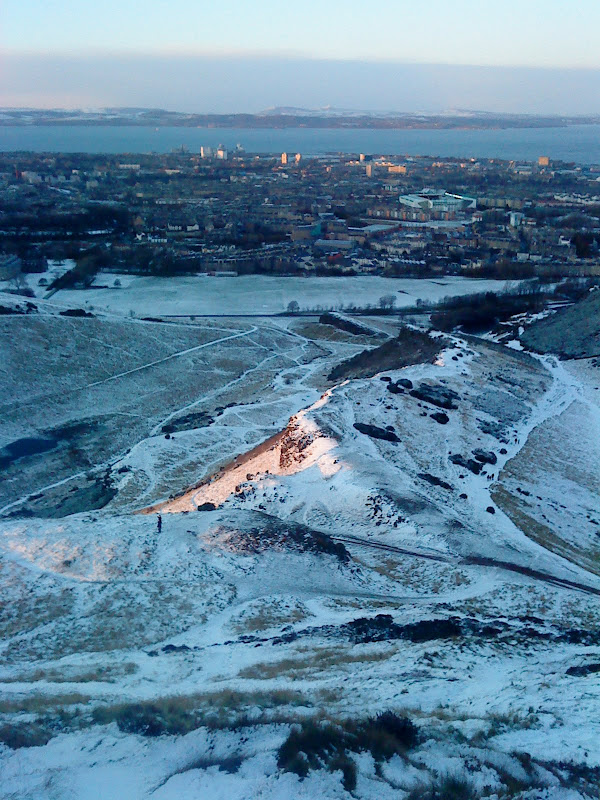 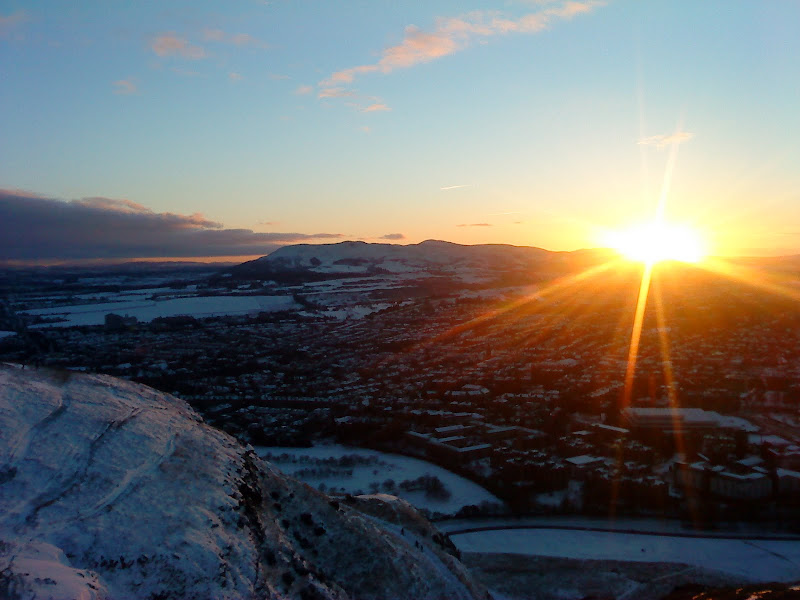 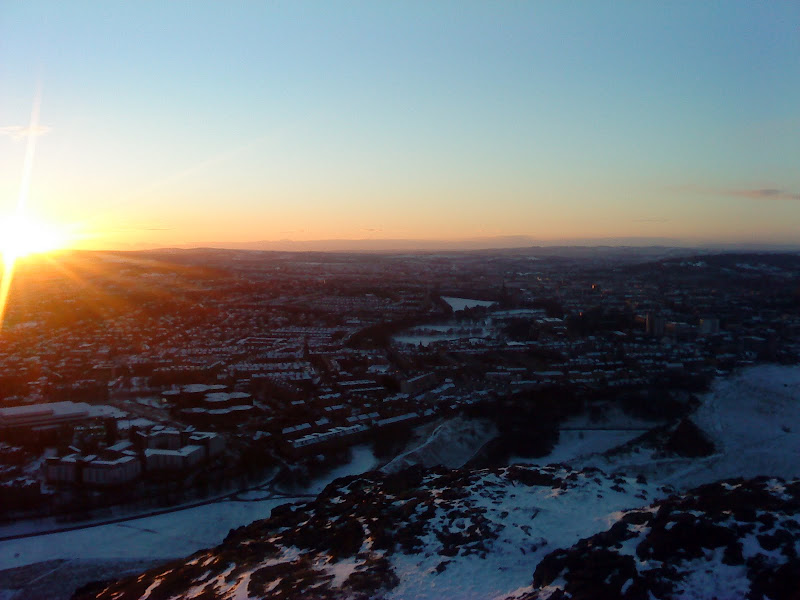 Salisbury Crags, Edinburgh and the Forth: 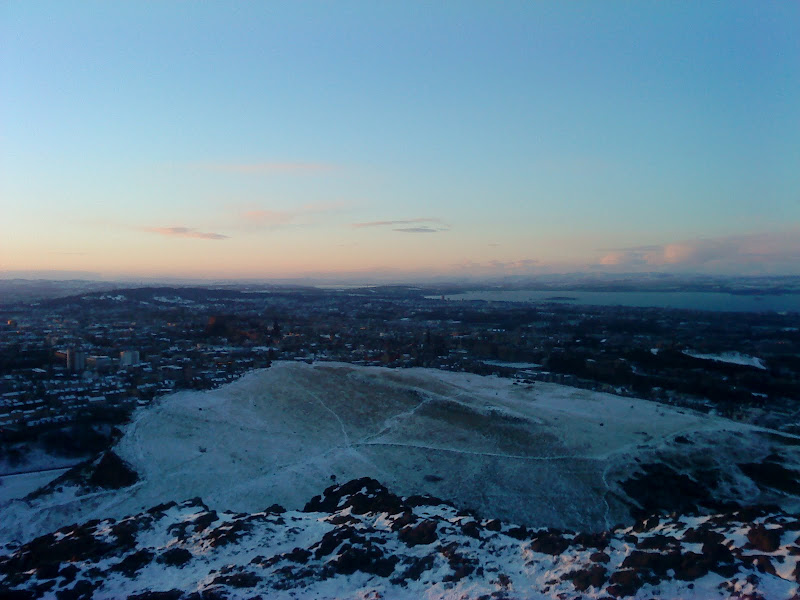 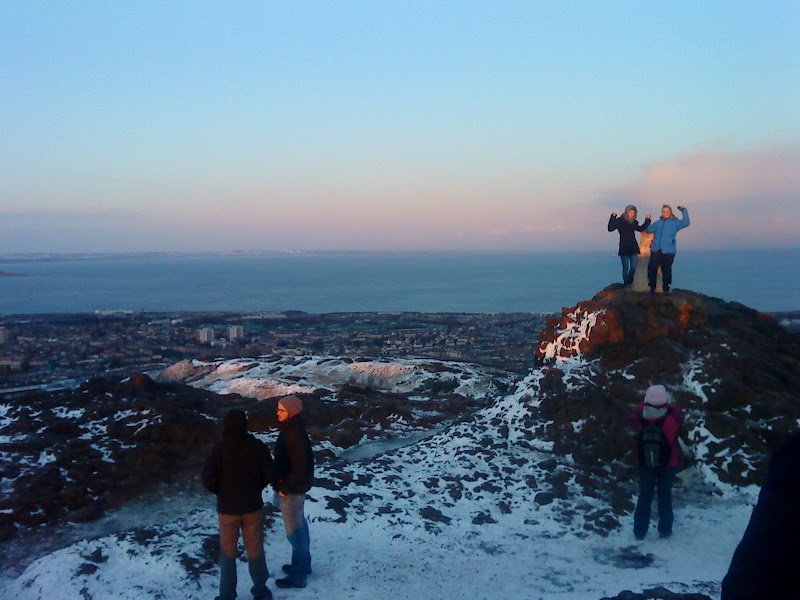 We retraced the top bit of our route, then headed towards Holyrood Palace, as we had agreed to meet Gill by the Scott Monument. By now, we were running late (as ever

). Descent was even harder than ascent, and I went down a lot of the smoother sections almost on my backside, sliding my feet and walking my hands on the ground. Graceful as ever

. We ended up dropping into the valley to our right, as crashing through the fresh snow-laden long grass was much easier than ice skating our way down the path. A walk up the Royal Mile then over the North Bridge finished the day nicely.

Waverly and Princes Street from the North Bridge: 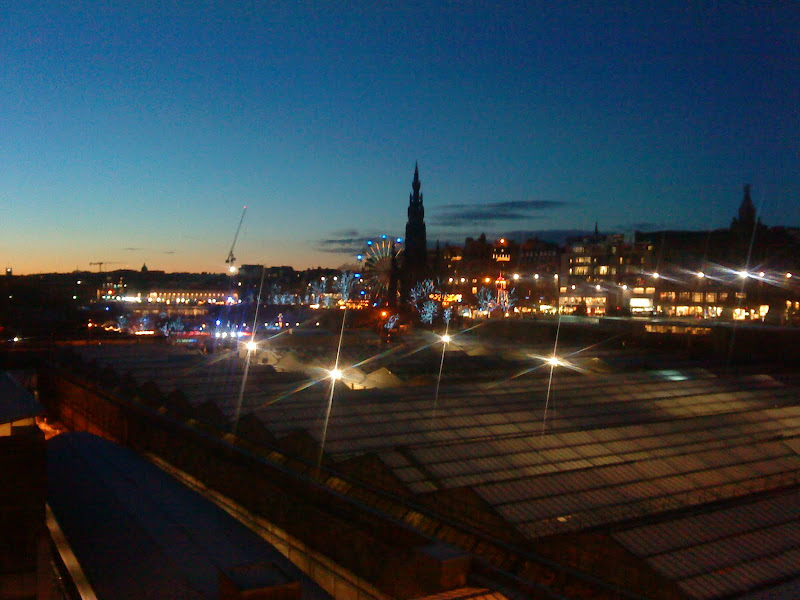 . With the travel chaos the following day, I was pleased that the train managed to make it all the way back to Inverness, even if it did take almost 2 hours longer than it should have. Fair play to anyone who managed to get out on the hills on Sunday - just travelling anywhere was a task in itself!

What a wee treasure find, and the pics are very good quality. My phone is one of those old ones thats the size of a small boulder!!

We hoped to get back out onto Clach na Ben today.

soon forgot about that idea when i looked out the window. Anyhow there was no chance that the road up the Cairn o Mount would be passable.

Cheers Malky - having spent 13 years living in Auld Reekie, I never tire of seeing pics of the Seat. Love that last picture!

Some great shots there Malky! Hopefully you missed out on the epic journey up the A9!

I have stopped in edinburgh dozens of times, and for the 1st time ever I did Arturs seat in Sept just gone, cracking walk and veiws, I should have done it long ago.
Amusing to think of you in your un-mountaineering gear sliding on your backside, if any seasoned hillwalkers were watching I bet they would be Tut-Tutting, but if they only knew what you usually do......

Impressive stuff - fit phone is that then

Cheers all, certainly a great hill to have in your back yard if you live there

. Laura is up and down it dozens of times every year.

Surprised at the camera phone positivity - suppose they work fine in this report, but they look a bit rough at full screen. The phone is a Sony Ericsson W595, which is a couple of years old. The newer version (the W995) is much better (Gill has one of those).