After a long weekend of very mixed weather and walking in Northumberland, the purpose of the trip – the top of the Park and a major landmark among the last few English mountains. Doubtless it's perhaps better to save this for a drier day than the immediate aftermath of a huge storm, but this was too close to leave it unclimbed!

cheviot.gpx Open full screen  NB: Walkhighlands is not responsible for the accuracy of gpx files in users posts
Heading for the main peak of the region by probably its 'trade route', from the Harthope Valley, you might expect a few more of the trappings of a popular day out. But the approach, along a tortuous back road, the parking (a patch of grass and hard-standing below the south of the road), and the start of the path up the hill (well north of the concessionary path shown on the OS) are all unsigned and empty and without confidence in the map you might be unsure this is the right place. Quiet and unspoilt aren't reasons for complaint though, and it's a very pretty valley even under grey skies. Once found, the way up is broad and obvious, if very boggy in places and needing a fair bit of zigzagging concentration, especially around Scald Hill. It's a relief to reach steepening ground and a more stony path underfoot. I passed (for the second day running) here a charming old couple laden down with heavy loads of equipment in pursuit of their target of radio-broadcasting from the top of every Marilyn; a nice reminder that there are far more esoteric missions even than tramping round the damp Hewitts of the north. 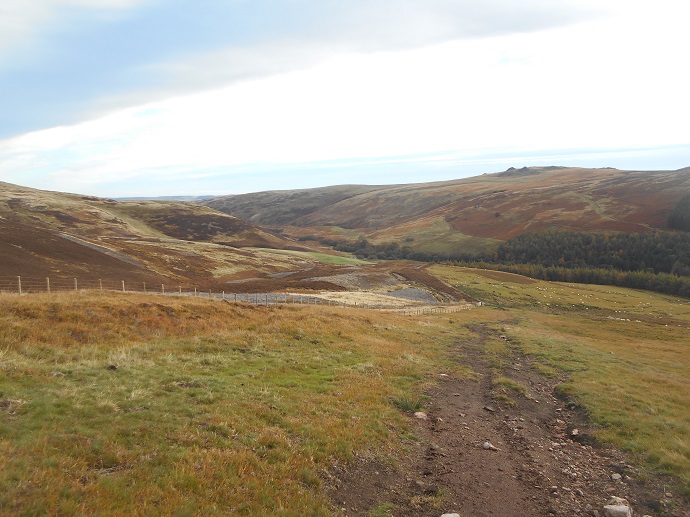 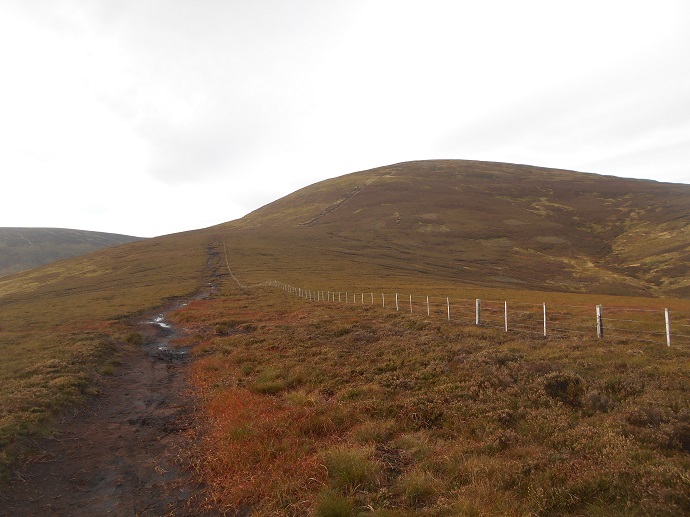 The top of the slope is a mile-long flatland of largely bare black flooded peat, and it must have been desperate going before the line of thick flagstones that now heads across and past the elevated summit of The Cheviot to the Pennine Way. There aren't many nearby views, but the sky was incredibly clear and the silhouettes of Cross Fell and Blencathra, perhaps a hundred miles away, were easily discernible in the distance, maybe the longest view I've seen from any summit. A decent path cuts away from the flags down to the head of the valley and what looked a nice way back down, but if I wasn't going to climb Comb Fell (rumoured to be the boggiest hill of all) from half a mile away, I probably never would. Knowing exactly what to expect probably helps a bit, but the very flat summit plateau really is tough going after a couple of days of rain. You can enjoy the challenge of trying to keep dry ankles for a while, by a series of long-jumps, detours, makeshift bridges, and the like (inching along the fence works well over some of the wetter breaches, even if it might not please the landowner much), but it does pall in the end. A short stretch is helped by a decent stretch of mesh-pathing – generally warned off by a sign that this was a new experiment, I dutifully sploshed along beside it except in the worst parts. In the interests of science, I report that it would be a huge improvement if extended, and that it doesn't harm the natural flora. A little frustrating in hindsight to read that this 'temporary' measure and warning has been there at least since 2014! so I'd imagine that future visitors can probably just about use it by now.The official summit, conveniently right at the fence corner, doesn't look much higher than anything else nearby but this probably (hopefully...) isn't going to be top of the list of targets for the inveterate highpoint-remeasurers. I'll be counting it as climbed regardless! This may or may not still apply... The stretch towards Hedgehope Hill is no easier, until it steepens onto a good grassy patch right at the end but a burst of sunshine helps and this is the greenest and most defined summit around here by far. I got there at the same time a big crowd of local walkers (on a decent Monday, there had previously only been the two hams and one man on the Pennine Way spur), and it's a good place to linger for a while. Looking back from the rise to Hedgehope Hill The way back to the valley seems a bit further and (this day at least) a lot wetter than it appears on the map – best to ignore the two paths on the map I looked for which aren't to be seen on the ground (quite steep and tussocky, if manageable, slopes) and just follow what looked a much more trodden route along the fence. Despite a couple of interesting crags rising out of the marsh, I had lost a little spirit and a lot of energy (this is much harder than the distance and ascent stats might show) by then, and it was great to be lifted by the sight of a red squirrel (too fast for the camera, but the first I'd ever met) above the Harthope Burn. Three more ticks on the list, and one or two lovely parts, but a walk perhaps to be saved for the height of summer... The Cheviot from Long Crags Well done on getting round these after a boggy spell.

Comb Fell is indeed a visit once kind of fell....but then again it does sit awkwardly in the middle of the circuit!

Not many to go now mate!

Nice report & pics; the extent of the views is impressive. The Cheviot is one of those hills I keep telling myself I must go up one of these days, but I never seem to get round to it