The Convenient Coast to Coast

The Convenient Coast to Coast

colmpilation.gpx Open full screen  NB: Walkhighlands is not responsible for the accuracy of gpx files in users posts
"If the world was going to end on Wednesday this is how I'd spend Tuesday. On a sunny day in May it's the best walk in Scotland, which is to say in the world" is the beginning of Ronald Turnbull's description of day 3 of this route in "Across Scotland on Foot".

I developed a fireside obsession with this route in late 2017. Initial wondering if it were possible for mere mortals to attempt morphed into anxious intimidation as I knew I had to give it a go. I don't have great hill fitness but did some running and a few long (but flat) days as preparation for this. Day 2 in particular scared me, being 28 miles with about 3000m of ascent.

I was pretty reluctant to attempt this alone so I recruited a colleague Leonardo to help make it happen. I think I'd have bottled it long before May without him but once we'd booked flights to Inverness we were committed. The problem with flying up late to Inverness was getting hold of fuel for the crossing. We couldn't take meths or solid fuel tablets on the plane but in the end our taxi driver Johnny picked us up a can of gas the day before our flight to solve that problem for us, it would've been miserable without it.

On the drive up to Evanton the fields lining the Cromarty Firth were bright with oil seed rape, it served as a good marker later in the walk. Johnny dropped us off near Balconie point outside Evanton on day 0. We deliberately made it over to the trig point (3.7m above sea level) as an auspicious place to begin. The photo is about the freshest we were to look for the next 4 days. We sauntered through Evanton and found a fantastic place to pitch a tarp not too far from the black rock gorge but didn't sleep too well, partly out of excitement for the route ahead but also the prospect of a 4am start.

After breakfast and a hot drink we were away by 5 with the aim of making it to the Aultguish Inn in time for a hot bar meal. Our track west towards Loch a Choice Mhoir eventually turned into peat hag; whilst winding through the hags Leonardo went quite deep into the peat and tweaked his ankle tendons twisting to get out, it wasn't too bad at first but gave trouble later on. It was a relief to reach the corrie and attack the steep climb in between the crags and up to Ben Wyvis. After seeing nobody all morning we were quickly joined by about 6 others in the small windbreak at the summit. From Ben Wyvis we could see back to the yellow fields of the east coast and west to Loch Glascarnoch and the Aultguish Inn. It felt a long way away, especially with the intended route being well north of the beeline with the aim of sampling the mealls north of the A835. We stuck with the route as far as Loch Bealach Culaidh but by this point Leonardo's ankle was beginning to give him jip so faced a decision between trying to match Ronald Turnbull's pace or the long plod down the A835 and a hot meal before the bar closed. The bar won and although we arrived dishevelled the hot food, hot showers and proper sleep set us up nicely for day 2, which was when the real fun started.

After a civilised 6am start Beinn Liath Mhor a Ghiubhais Li eventually allowed us up to its domed summit from where we could see our route across to Loch Gorm and the Fannichs beyond. Getting across to Loch Gorm was less boggy than I feared it would be. We reached the ridge at Bealach Ban and proceeded along the wide ridge with the scenery building to the south and west, it would have felt like a stroll had it not been so blustery. At this point in the guidebook the author "proceeded to do all the Fannichs" but we realised our hill fitness is not in the same league. Sgurr Mor is higher but Sgurr nan Clach Geala began to dominate the near view, curving to the south with the route following the crags of Am Biachdaich. An Teallach and A' Mhaighdean were now visible and framed our route west out towards Poolewe. An Teallach seemed like no other mountain I have ever seen, the sight provoked a restlessness in me that will simmer away until I go there, a Sea Fever for the hills. From the airy gap along Am Biachdaich we could see our yellow fields lining the Cromarty Firth and perhaps the glimmer of Loch Ewe in the west, the full width of Scotland from one perch, completing the crossing seemed achievable. At the bealach before Sgurr nan Each, with the prospect of crossing Sgurr Breac and Toman Coinnich before reaching the Lochivraon bothy, Leonardo's ankle decided things and we chose the long but uneventful trudge round Loch a' Bhraoin. We arrived with an hour of light to pitch the tarp and cook up a haggis feast. The bothy was reserved for a party of schoolchildren but, thanks to members here, we had known this in advance. 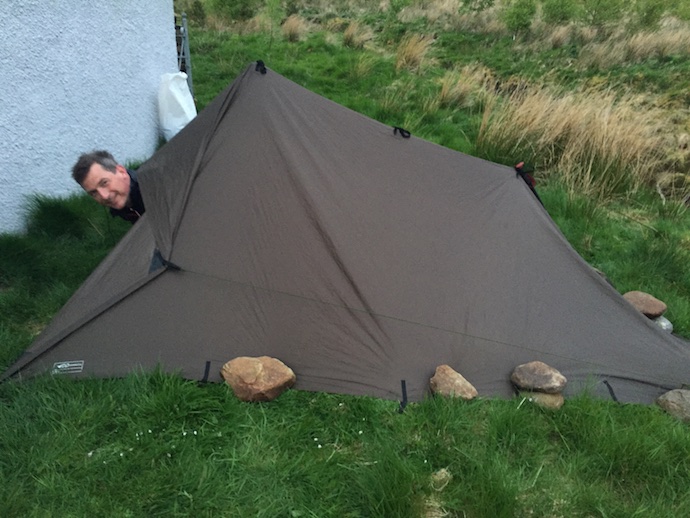 Overly pleased with myself to have reached the lodge 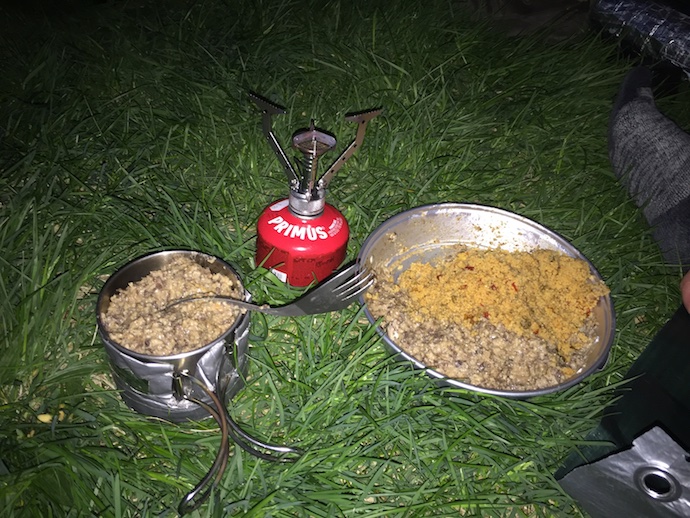 Haggis feast. Thanks Johnny for the gas.

Day 3 began with the clouds low around Sgurr Breac and after a fitful night trying to digest too much haggis, I hoped both would clear up as the day went on. We felt the pressure of time to reach Poolewe that evening to catch the next 8am bus to Inverness and our flight home. We climbed from near Loch an Nid up past exposed slabs and through a gap between crags to Sgurr Dubh. I had not done any scrambling before so was a bit unnerved by the rocky top in mist and a strong breeze but we began to pick our way towards Mullach Coire Mhic Fhearchair. Although Leonardo was loving things I nearly bottled it and announced an escape route down steep scree to Coire Mhic Fhearchair. I'm glad we didn't do that as the cloud soon lifted a little and the route along the ridge clearly opened up. We made the Mullach and left Sgurr Ban for another day, then headed up Beinn Tarsuinn and considered options, we still had a fair way to go to make it to Poolewe. I was not going to miss A' Mhaighdean but was concerned about descending by the pinnacles to the NW in the mist and wind. We made the top but chose the less exciting route off NE and around Fuar Loch Mor, where gusts blew cats paws in opposite directions across the surface and whirled round in the middle. The intended route via the pinnacles looked great but I shall come back again and do it when I'm feeling braver. 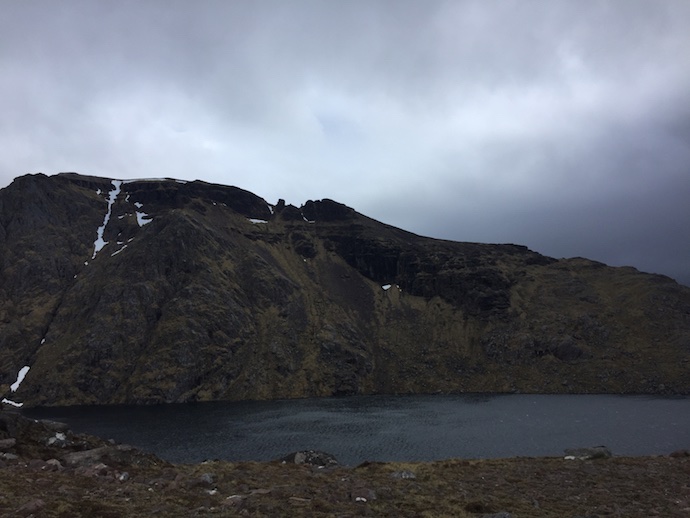 A' Mhaighdean across Fuar Loch Mor

We picked up the track to the Carnmore bothy, I think passing the most remote square in the OS grid. Leonardo's ankle was now causing him much pain and we were concerned about doing lasting damage. We decided to grab a few hours sleep in the bothy to allow his feet to recover, and leave by 1am to walk out to the bus. I apologise to the two women who arrived later only to find two exhausted tramps occupying it. I'm glad we changed our plans and stayed in this bothy that has so much history and was a refuge just when we needed it, I was cross to read online that a couple of weeks after we stayed it was vandalised. Not looking so fresh at Carnmore bothy

We woke at midnight and walked into a cold drizzle that went straight through my waterproof jacket and boots. I later returned the Salomon boots for a full refund. We took the route via Kernsary and missed out the Corbett the book had planned for us. We arrived in Poolewe at 6am, too cold to even think about the swim I had sworn I would take upon finishing. It was looking to be a miserable 2 hour wait for the bus but a hot shower at the campsite brought us back to life. We had not done quite the full intended distance or ascent but had made it to the west coast along a wonderful route. Re: The Convenient Coast to Coast

Fantastic, what a way to cross the country, passing through some of the most amazing wild country in these islands.