Moel Eilio on a misty morning

Moel Eilio on a misty morning


I was keen to get going the next morning, because the one thing that really mattered was getting over to Llanberis in time to catch the bus to Bangor, and I wasn't sure just how long it would take. The weather forecast wasn't great - possible banks of cloud sitting on the Snowdon range - but the hills were smooth and fairly harmless, and there was always the escape route of the Llanberis track if it got really bad quickly.

So it was only about 9 when I started heading back up the Snowdon Ranger zigzags, with a helpful sign pointing me past the buildings and back onto the track. This still seemed to me more like the Lakes on a grander scale than like anywhere else I'd been - coming down into the valley the night before it had reminded me of Buttermere, but now as I turned at a corner I thought for half a second that I was climbing out of Ennerdale, with Mynydd Mawr presumably standing in for Crag Fell. I left the Ranger path at the same junction where I'd rejoined it the night before, not far below the Very Important Gate - the junction is clear, but there's also a helpful post with Llanberis written on it to point you in the right direction. It's a very nice looking track leading down, presumably made so that bikes can't spoil it, but smooth for walking too - quite tempting.

However, my route was the grassy trod uphill - Moel Cynghorion looked quite different from this side, and through the gap the sunlit Glyders were looking very mountainous, and possibly a bit more Scottish than anything I had yet seen. So far all the cloud was piled up behind the Nantlle hills - with the wind blowing steadily towards me some of it would have to break away eventually, but whenever I looked round the valley was still clear It was really quite a short climb to the summit of Foel Goch, although as always it was further back than it looked at first, the trodden line flattening off as it approached the little summit.

I wasn't quite sure if this was an important summit or not, since it depends on the drops as much as the heights - I left the fence to walk across the very flat summit area just in case, and found a spot marked by three stones. 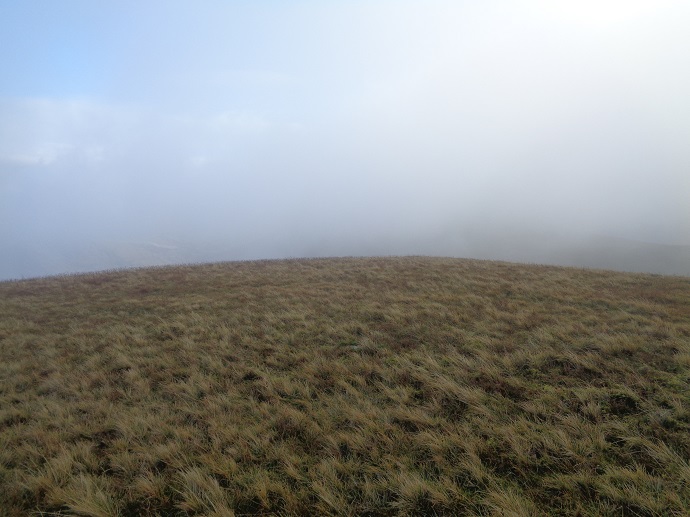 Up here a great grey cloud had finally flung itself at me, so that all I could see was fog and fence and an island of grass - the obvious route was to keep following the fence downwards, but it didn't feel quite right, and a check showed me I should be bearing left instead of slightly right, crossing a stile and following a different fence down a different slope.

It was an eerie descent, easy enough ground but still through a great blankness, and the wind strong enough to feel uncomfortable. A crack in the mist showed a slope ahead with crags where no crags should be, and since staying over this side of the hill to avoid steep ground on the other was my plan for dubious weather that was worrying - I felt very alone and very foreign, which I rarely do in the English hills.

I seriously considered turning back, but since I thought I was probably somewhere near the bottom of the cloud, I found a relatively sheltered spot to give it 5 minutes to clear - which it did beautifully, the crags retreating to the other side of the valley and becoming big and far away, rather than small and close, and the bottom of the slope revealed not far off. There was even a glimpse of a view, under the dark clouds still rolling over further up - two lakes, Llyn Dwythwch between the long edges running down from the hills, and Llyn Padarn in the valley. There was rarely very much of a view as I went on, but it didn't come quite so much down to nothing again either - I could generally see a bit of what was around me, at least. At the start of the climb up the path was well back from the edge, but at the first top there was a confusing little bit where you end up walking along a tiny narrow ridge and coming steeply down the other side. With the mist confusing all the distances I thought I might be coming to the summit of Foel Gron, but when it cleared there was still a good way to go - there were some lovely sharp edges all along this side. A glimpse of edges

As I climbed on - and met the only other person I came across on the ascent, who seemed to be out for exercise rather than views - it briefly cleared so much and got so bright that I felt quite hopeful, only for everything to become grey again a few minutes later. Clearing on the climb

Up here there was a fence to keep me safe from the steep ground, but the absolute summit of Foel Gron was a little stony mound on the far side of the fence. A minimal descent, and then a new climb - at one point there were even blue skies overhead, but it didn't seem to make much of a difference. The next barrier, just as the slope levelled off, was a cross wall rather than a fence - I couldn't quite see the point of putting in a tall ladder stile in order to climb over nothing, but that was how it was! The summit of Moel Eilio was marked by a huge shelter - well-defended, because it took me a while to find the way in, having been led astray by another stile. A spot nearer the edge marked by a few rocks looked like it might really be slightly higher - not that there can have been much in it, but I was doing it properly. Having visited the possible summits there wasn't much to hang around for, and I set off downhill again - it was a thoughtful hill, because the one muddy place had been carefully bridged. I met the first group coming up not far below the summit, and from then on it was pretty busy, pairs and little groups and big groups - obviously a nice weekend walk from this side.

Once again I was descending into a different and much nicer day, although the clouds were also melting away behind me, leaving only Snowdon itself deep in the mist. I hadn't really had any long distance views from the hills yet, so the surroundings were new to me - what looked like a long inlet puzzled me a bit until I realised that it must be the channel separating Anglesey from the mainland. I was still trying to work out anything which was special to Wales, and I was quite struck by the extent to which people seemed to live up onto the high ground - even more on my later bus journey into Bangor, where the bus turned aside through villages running steeply uphill. In similar parts of Scotland I think the houses would be more inclined to cling to the low places round the edges. The path ran down to an area of old quarries, just where a road leading in from the left became a track. The track led on almost as a terrace path above Llanberis, keeping to the heights for some very good views - towards the head of the lake, and by a very fancy building on the other shore, it seemed to be Wales trying to masquerade as Switzerland, not that Switzerland isn't a very attractive thing to be.

The near side was a bit different - all this area seemed to have been heavily used in the past, with a scatter of little ruined buildings, and some quite attractive old spoil tips which were almost purple in colour, a nice contrast to the brown and green hillside. Eventually the track became a little road leading downhill, and then the back streets of Llanberis. The main road was all closed off with roadworks, and it didn't look like there was much beyond, so I turned the other way, only to find that there wasn't much there either (although I did come across some toilets), and have to turn back again to pass the roadworks.

Once found, Llanberis was an odd looking place, with buildings painted pink and yellow and purple - maybe it was still trying to look Swiss, or something else, but it was like nowhere I'd been in Britain - and definitely not the genteel Keswick equivalent I'd been unconscious expecting.

I went on too far trying to find a way to the lake, and ended up going right round to the road junction, but once I got there it was lovely - still pseudo-Switzerland, with added ruined castle, but also with a very Welsh giant sword. My last objective in Wales was a trip to the Menai Straits to see Telford's great bridge, walking down from Bangor, which was a bit more full of ups and downs than I expected. The bridge was pretty stunning, and I was also pleased because I thought Anglesey was my 10th island of the year, although it turned out that I'd forgotten Bute and it was actually the 11th. I had to be in Newcastle by 11 on the Sunday, so my compromise was to travel up as far as Manchester on the Saturday night - very sorry to leave Wales behind, and not only because I don't like Manchester all that much!

(Next time, Cadair Idris and the Pontcysyllte aqueduct, which I thought might be difficult to get to, but turns out to be conveniently on the bus route from Dolgellau to Wrexham. I see no reason to change the winning combination of hills and Telford, although I probably can't fit in a castle if I'm trying to do it in a weekend!)