As ever, I only had one day free this month to try to get a walk in, and it was Saturday 17th November ... The forecast wasn't bad for the time of year (although not as good as the Sunday 18th, for which wall-to-wall sunshine was promised but needless to say I had family commitments

). The weather looked Best in the West, for once, so I thought it might be a good opportunity to get that awkward wee Graham bagged that sits almost due west of Glasgow and well south of Dunoon, Cruach nan Capull. On its own that would only offer a fairly short walk, however; so if time permitted I thought I might also have a look at the S2K Marilyn Black Craig, over on the south side of the Inverchaolain Glen.
There are two possible approaches - from Glen Lean to the north, or from Inverchaolain to the south. The Inverchaolain approach involves a longer drive but cuts down considerably on the walking time, particularly if doing Black Craig too. Given the limited daylight available at this time of year plus my usual slowish pace, I opted for the Inverchaolain approach, needless to say

our_route.gpx Open full screen  NB: Walkhighlands is not responsible for the accuracy of gpx files in users posts
It felt slightly surreal to be heading WEST on the M8 out of Glasgow for a hillwalking trip, but a change is as good as a rest and all that

. I managed to make it to the Western Ferries terminal at Gourock in time to catch the 8 a.m. ferry to Hunter's Quay, just north of Dunoon - a real boon, as the next ferry would have significantly shortened my amount of available daylight

. The twenty-minute ferry crossing was a pleasure, with fine views across the Firth of Clyde to Dunoon, although I wasn't convinced that the Clag looked ready to lift any time soon! It was indeed quite a long drive to the very end of the A815 at Toward Point, then on down the single-track minor road up the east side of Loch Striven to the parking area at Inverchaolain Church, but it was scenic enough. When I eventually arrived at the start of the route at the foot of the track to Stronyaraig Farm, the sun was shining and there was a fine view north up Loch Striven: To be honest I didn't have particularly high hopes for this Graham, which is one of the lowest of all the Grahams and which doesn't look terribly impressive on the map: however, as viewed from Stronyaraig, this wee hill has real presence, with its steep southern nose of Sron Dearg being unexpectedly impressive. (Presumably Stronyaraig Farm gets its name from Sron Dearg, with Stronyaraig just being an Anglicised version of the Gaelic hill name.)
Anyway, I set off up a track heading uphill just beyond the farm, and then up a faint side path that headed straight up the Sron. The path soon fizzled out amidst fairly deep heather, however, and it was a bit of a slog up the steep slope of the Sron. As is usually the case with a steep ascent, however, there were fine views for distraction, with Loch Striven looking very attractive looking back south down to the farm: 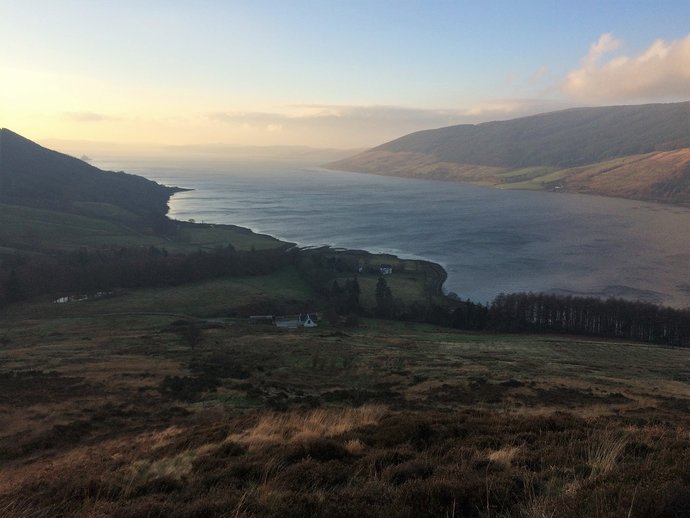 I ploughed on up through the Bonny Blooming Heather, and thankfully the terrain eased to grassier ground higher up. Sadly, however, the Clag really didn't look as though it was about to lift from Cruach nan Capull's summit any time soon: nae summit views today, by the looks of it As I got higher up, the gradient eased off quite a bit, and it was a fairly pleasant stoat on up northwards on Cruach nan Capull's long and grassy but well-defined south ridge, with a line of fenceposts appearing to help with navigation just about the time that I finally hit the Clag. About halfway up the ridge, there is a slightly random Trig Point on a minor southern top, Point 572: Cruach nan Capull apparently means "Heap of the Horses", although the reasons for its name are, as usual, lost in the mists of time. I didn't see any horses, but there were certainly heaps of sheeps, which were eyeing me suspiciously as usual 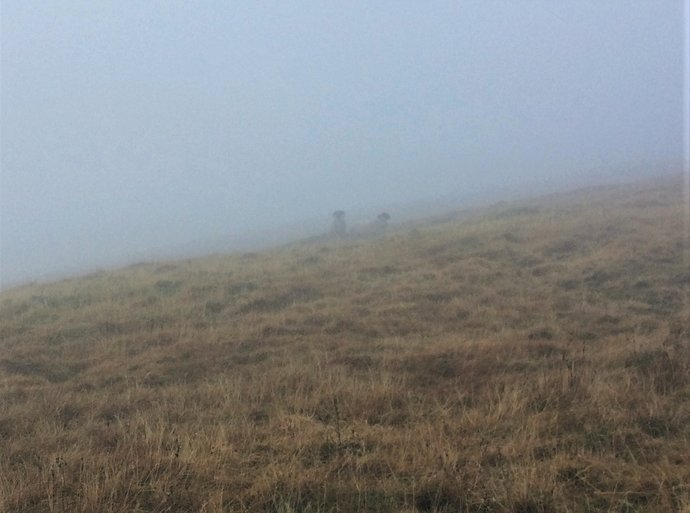 It felt like a surprisingly long way from Point 572's Trip Point to Cruach nan Capull's summit, but eventually I did reach the rather bijou summit cairn, which sits at the meeting point of three lines of fenceposts. I headed off eastwards from the summit, following the ongoing line of fenceposts to descend, quite steeply initially, to a minor bealach followed by some re-ascent up to the Cruach's east top, which is known as "Leacann nan Gail". The Leacann is below the 600-metre line, and as I approached the lower edge of the Clag, I started to get some pleasant hazy views again. This was the vista round the west side of the Inverchaolain Glen from the Leacann: I headed on southeastwards from Leacann nan Gail, still following a line of fencing, to an easternmost top, known as Green Knap, and on down to the Bealach na Srèine, which is the bealach between Cruach nan Capull and Black Craig.
The Bealach na Srèine is crossed by an ancient Right of Way, which was a coffin road between Corrachaive in Glen Lean and Inverchaolain Church. Yes, the old crofting communities in Glen Lean really did used to carry their dead over this bealach to be buried in Inverchaolain churchyard - a rather chilling thought; hard lives in hard times An into-the-sun shot back down the Inverchaolain Glen from the bealach, with Loch Striven hazily visible in the distance: The bealach proved to be predictably boggy, and featured some entertainingly long and tussocky grass interspersed with juicy bits of swamp. However, I made it across in one piece, and headed on up the rapidly steeping western slopes of Black Craig. Despite being a rather undistinguished rounded moorland hump, Black Craig does have intimidatingly steep and heathery western flanks, and I quickly decided to head up one of the incised stream gullies that cuts into the escarpment, hoping that it might give a slightly gentler route up. At the least, it should hopefully give a respite from yet more Bonny Blooming Heather Once I was eventually in the stream gully, I found a nice big boulder to sit on for a bite of lunch. The gully didn't quite give the carefree ascent route that I'd hoped: it was steeper than it initially looked, with a couple of mildly exposed sections on steep grassy slopes above small waterfalls, and at one point I had to resort to wading up the stream bed ... All the same, I think it is safe to say that it was altogether more entertaining than the alternative heathery wade up the Marilyn's steep flanks would have been

!
After a final steep haul up the final headwall of the gully, I was up on Black Craig's pancake-flat summit plateau, enjoying a last look eastwards towards Cruach nan Capull before the Clag closed in again: 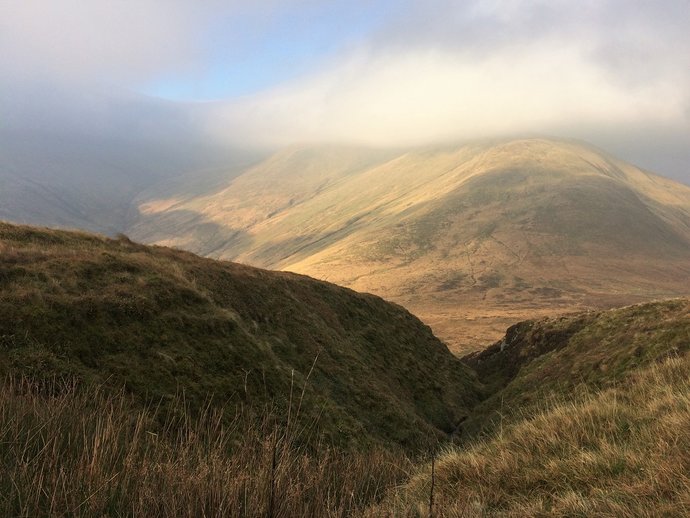 However, the Clag seemed even thicker on this side of the glen: nae summit view from this one either, by the looks of it

! It was a bit of a trudge southwards over the featureless plateau, and it was quite a relief to find the fairly substantial cairn that is rather randomly plonked at NS116761: This isn't Black Craig's true summit, however: after a fair bit of wandering about in the Clag, I eventually - with the aid of my GPS - found three small boulders that appear to mark its excessively rounded summit, about 500 metres south of the cairn. It was one of the most unprepossessing summits I've visited, and even the photo I tried to take turned out as a blurry mess, so you'll just have to take my word for it that you're not missing much

!
I thought that it might be aesthetically pleasing to complete a skyline round of the Inverchaolain Glen by heading further south to Black Craig's southern top, which is named on the map as Blàr Buidhe. Also, the Blàr appeared to feature a wee lochan just south of its summit, which I thought might be navigationally handy on these featureless flats...
I headed on southwards over the next rounded moorland top, hoping that this might turn out to be Blàr Buidhe ... and, just as I was ready to give up .... Lochan ahoy! 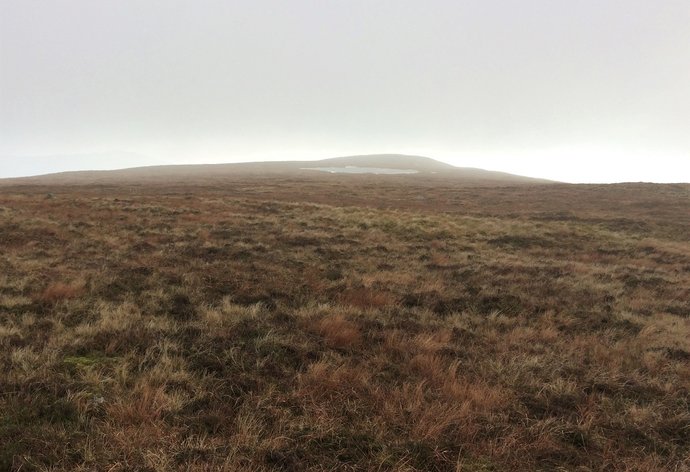 I headed off on a bearing WSW, hoping to descent along the northern edge of a line of forestry down to Inverchaolain Farm, and back from there to the minor road leading north to the church car par. This did actually work out OK, more or less, except that the terrain lower down near the farm got quite challenging, with first long, tussocky grass, then steep incised stream gullies with lots of wee birch trees to negotiate, then finally a thicket of gorse bushes .... At least there were some grand views by way of distraction, with some really lovely autumn colours.
This was the closest I got to a view of Cruach nan Capull all day, with its head very nearly out of the Clag... Some pleasing vistas of Loch Striven: After the bush-whacking through all those whin bushes at the bottom of the hill, it was quite a relief eventually to squeeze through a gap in a barbed-wire fence to enter a field with coos, and finally to reach the Inverchaorain Farm track from whence it was a straightforward walk back to the church car park.
A closer look at those coos on the way past: Despite the mildly disappointing weather, this was still a very enjoyable day out in a rather out-of-the-way corner of Scotland, with Cruach nan Capull proving a more impressive wee hill than I'd expected