Durisdeer in search of Sampson & wife!!

Durisdeer in search of Sampson & wife!!

Sampson & Wife.gpx Open full screen  NB: Walkhighlands is not responsible for the accuracy of gpx files in users posts 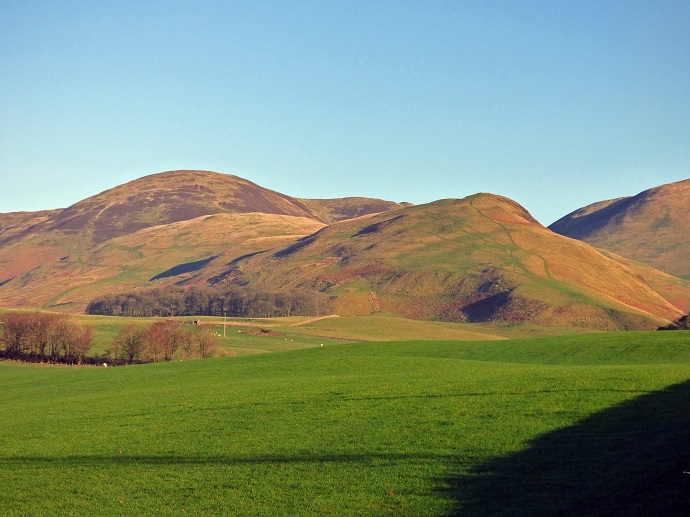 On the right the track up Wether Hill heading for Black Hill on left
A stunning walk early winter with the ADRC, an ascent of Well Hill including a few more rolling hills from Durisdeer. Durisdeer is in my top 5 of scenic places to visit in Scotland: isolated, relatively unknown, great walks and packed with history.
Durisdeer village is a traffic dead end accessed by some minor roads but for those on foot many options for onward travel. As such it is seldom visited, certainly I only discovered it through walking. A visit to the medieval church and its mausoleum is an absolute must whether walking or not. 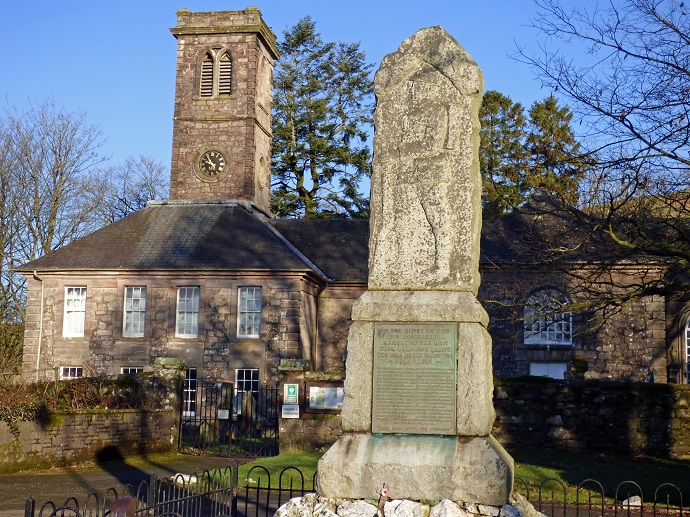 Durisdeer War Memorial and Kirk
But there is more to Durisdeer than just its church although it is typical of rural areas in the past where there was a sizable parish area and population. Where we parked, just outside the church, is the village war memorial. This has the names of 33 men who did not survive the First World War and 7 in WW2. A large number for such a rural location.
Throw in Salman Rushdie who had this as a location in his infamous Satanic Verses, a place of recuperation for archangels apparently.
The area is a shooting estate so some areas might be out of bounds at times. There was shooting today but not on our side. Typical rolling hills
We began the walk with the long steep grassy ascent to the trig point at Black Hill. This sorted out the group, not long before it was single file. Height is gained quickly and plenty of opportunity to rest and take in the views. 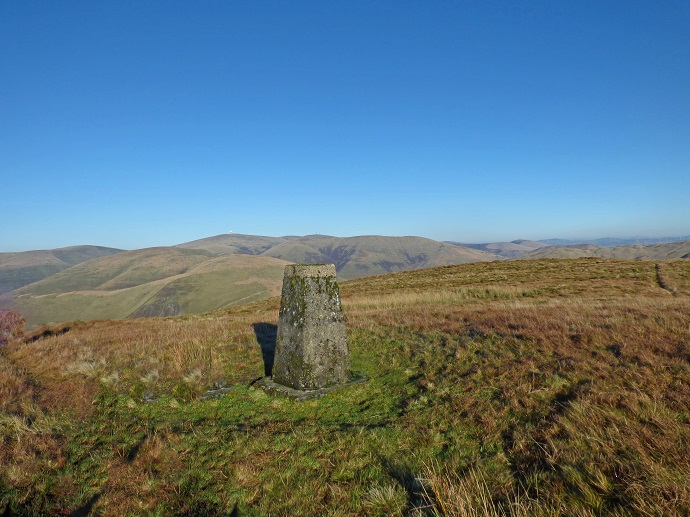 Black hill trig
From the top we chose the option of going a bit further north over Stanebutt Hill to try and find Sampson & his wife. A name given to two conspicuous rocks when viewed from the road far below they give the appearance of a man and a woman sitting on the hills. They are on the OS map and internet records show a hand written record of them back in the 15thc, impressive. 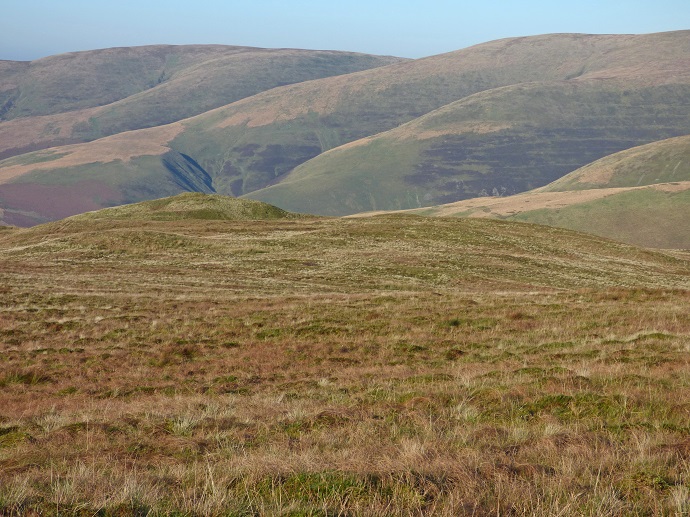 The hillock ahead marks the spot.
We took our coffee break at the spot but could find no resemblance of human figures up here so it must be from the road. Still, no hardship for the short detour as there are wonderful views all around. 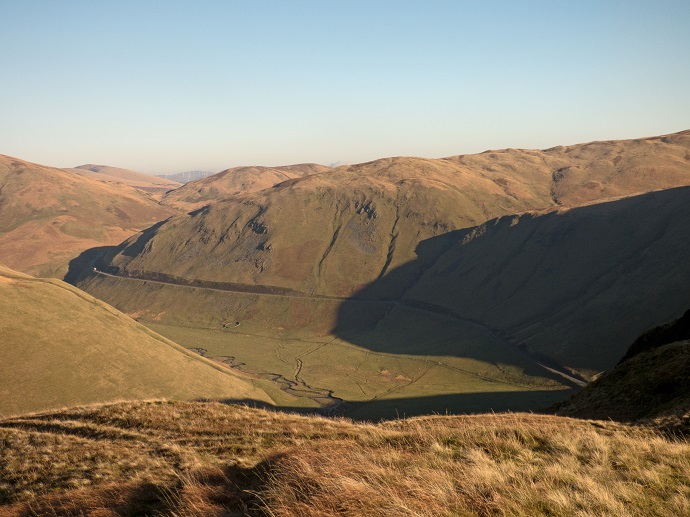 Dalveen Pass
These are magnificent rolling hills with super views all around, particularly from here over the Dalveen Pass. Munro snobs will turn there noses up at these hills but they are the losers. 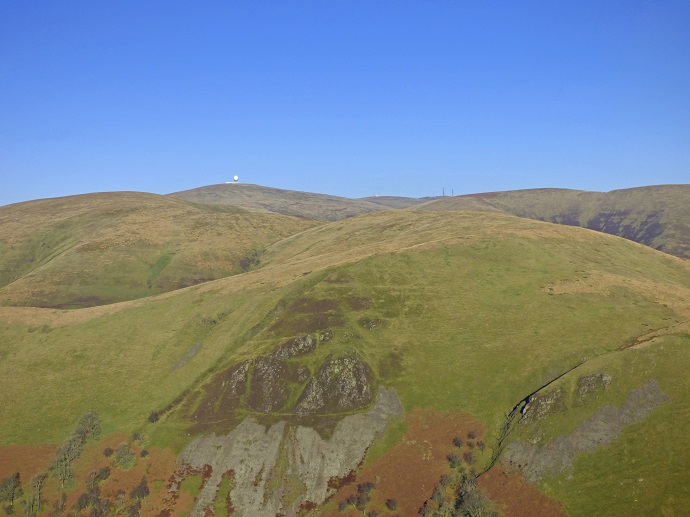 Lowther Hill radar stuff in distance
Next a tramp around the main ridge to Greentrough Head, followed by a sharp descent then another uphill section over Turn Hill takes us to the Sub2k objective of Well Hill. Disappointed that it is just a small bundle of rocks from a rundown wall beside a fence. Still great views in every direction except for the gigantic and awful Clyde South Wind Farm, over 100 turbines!! Steep descent
Climbing for the day is now over and this is now a very quick, steep, grassy descent down to the Roman road. Slalom skiing style adopted to avoid the knee tensions. Looking down Roman Road towards Durisdeer
From here you could take the estate road but we opted to follow the original Roman road, today wet and muddy route back to Durisdeer. 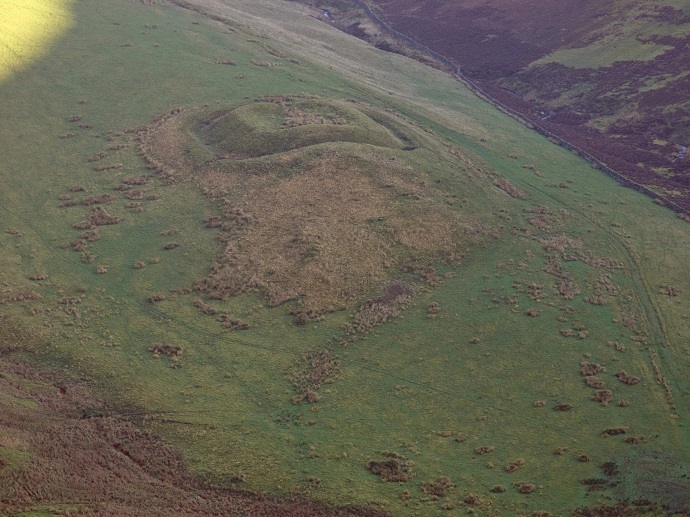 Roman Fortlet from Wether Hill
Along the way we tramped across the site of the Roman fortlet, which apparently is one of the best preserved in Britain. with protective ramparts and ditch still visible as per above snap. Imagination time thinking what this would have been like as a settlement in those days, noise, fire, smoke horses etc. Well Hill descent doesn't look so steep from here
Normally the scavenging red kites are aplenty here but the shooting must have moved them elsewhere. Luckily for us just at the end of the walk a single bird showed well, a fine way to end a super walk.
Wildlife: Red Kite, Buzzard, Rook, Red Grouse, Red Legged partridge.

Wonderful as always Des - did much more justice to the area than my report a while ago. Would agree with Durisdeer being in the 'top 5' - easily the best hidden gem I have found in the southern uplands so far and the nearby hills are some of the most shapely they have. Had no idea about the Satanic Verses reference, will need to check it out.

Ta for review Ian it is a great place and this was a fine day but this trip not as epic as yours.

Beautiful day for it, and the hills look fabulous. Some interesting and informative stuff too.

Round my way, you don't want to meet Samson and his wife, as they are a particularly aggressive pair of swans on the River Wey that attack us canoeists!

Thanks. As a game fisherman as well I have had a few encounters with uptight swans, always treat them with respect.