The Devil that got away

The Devil that got away

The_DP.gpx Open full screen  NB: Walkhighlands is not responsible for the accuracy of gpx files in users posts

Last summer we spent a week in the Cairngorm Lodge youth hostel, in what was perhaps the worst consecutive week of weather all year. At no point did it stop raining on the Cairngorms, and at no point did the wind on the summits drop below 40mph.
At the end of the week I was quite done with waiting for the weather to improve and decided to do the walk I had been thinking about for a while regardless. Five of us set off from the sugar bowl at 8am, headed for the Devil's Point via Braeriach and Cairn Toul. By 3pm we were at the head of Coire Odhar- and then disaster struck, as we stupidly got turned around in the fog and ended up climbing Cairn Toul a second time. Once we'd figured out our mistake and returned to the coire, it was too late to think about climbing the Devil's Point. Defeated, we turned around and walked out through the Lairig Ghru. 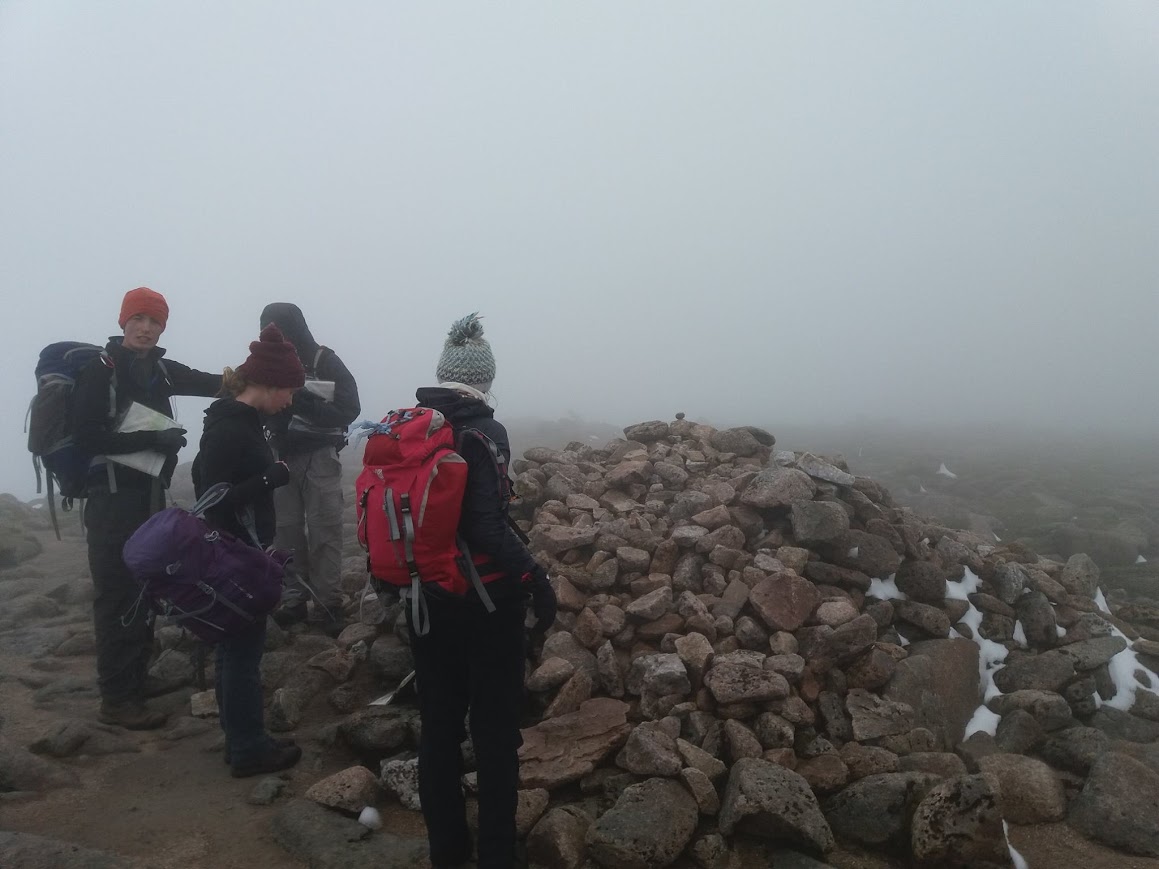 Alex and I never forgot the humiliation of being bested by a mountain, and always planned to return. As it happened, last weekend we were both attending a meet in Braemar and came up with a plan to bag the Devil's Junk once and for all, tagging on Monadh Mor and Beinn Bhrotain for good measure. The eventual walk was a little different. 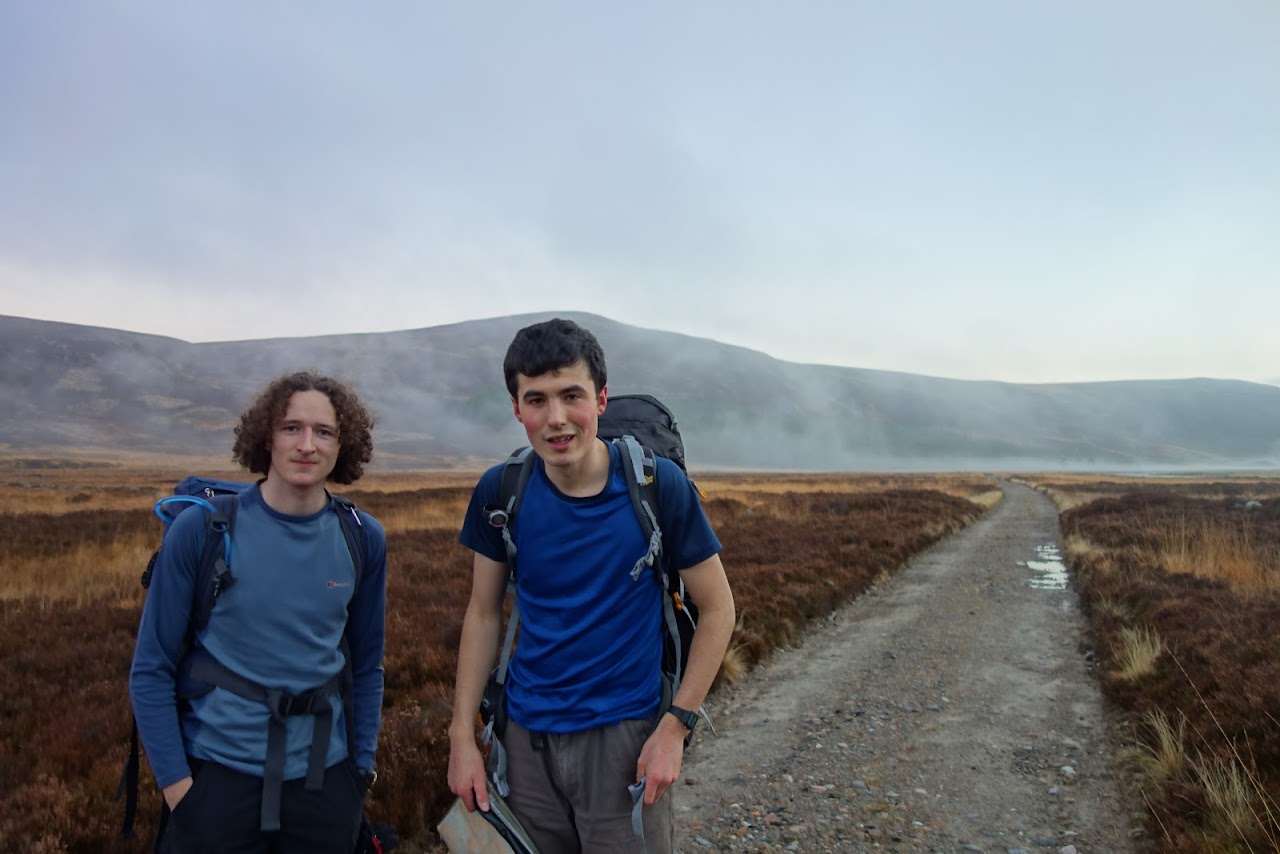 Jethro and Alex in Glen Dee.

Joining us was Jethro, an experienced hiker who'd come walking with me before. We snuck out of the hostel at 6:30 on Saturday morning and drove down to the Linn of Dee in the dark, fog bouncing my headlights back at me. We rolled up to the car park just before 7am to see half a dozen cars already there; clearly others had seen the (excellent) forecast and held similar plans! I jumped out and discovered that the parking meter was out of order. Another walker told us that it was probably fine, so I memorized his number plate in case I needed to blame him later. By ten past we were walking down the road towards Glen Dee. 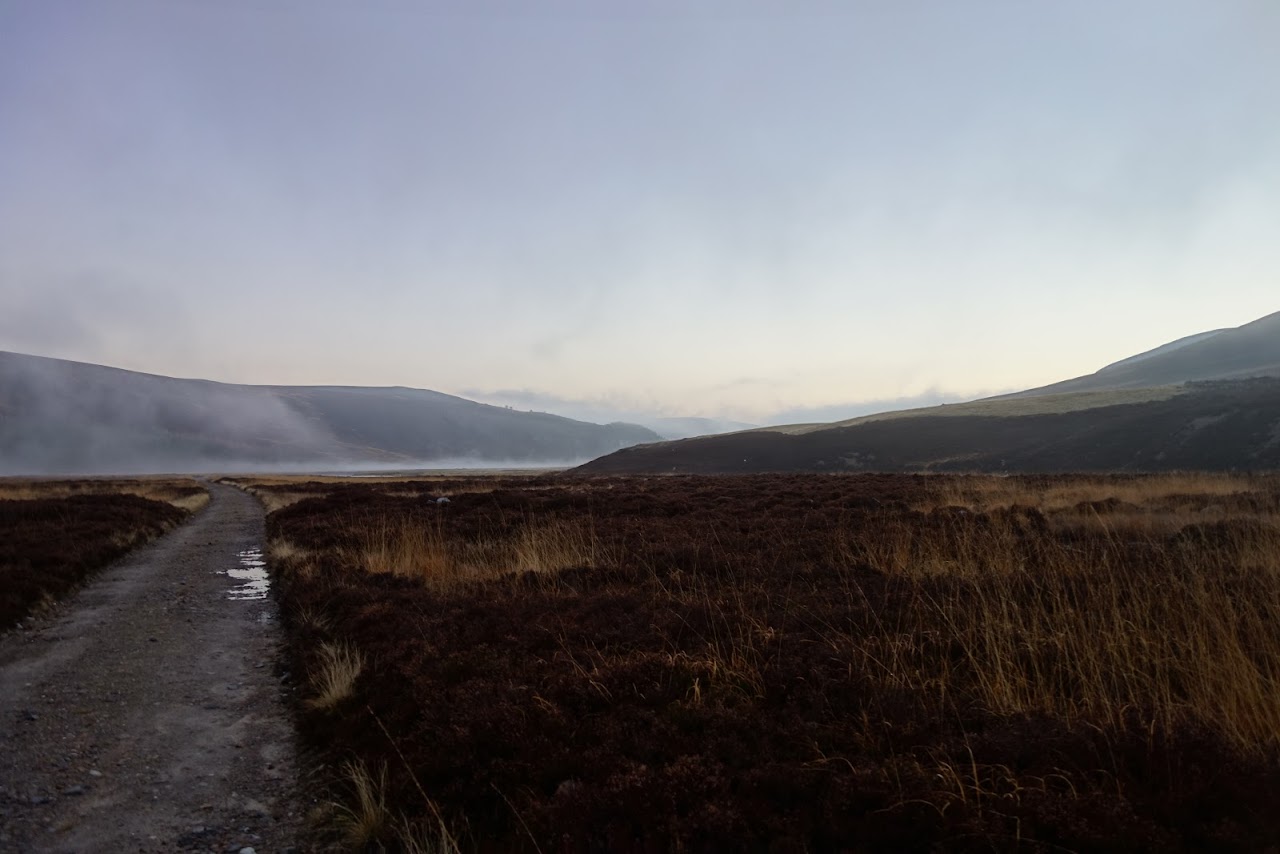 The walk in went by quickly in the fog. We passed the white bridge at 8, and by 9 were approaching Corrour, though we couldn't see anything through the deep fog. Eventually the track to the bridge appeared and we turned down it. Before we could reach the bridge, though, Alex stopped us and asked a stupid question.
'Do you want to do Angel's ridge?'
It was a stupid question because (a) of course I did and (b) doing so would add close to ten kilometers of distance and half a kilometer of height gain onto the route. While I was sure we could do it, 40km was more or less impossible to complete in the short daylight hours of November.
So we turned around and made our way back to the path that ran up towards the pools of Dee. As we did the cloud began to clear – a good omen, I hoped, - and we got our first (ever!) view of the mountain that was our real target. 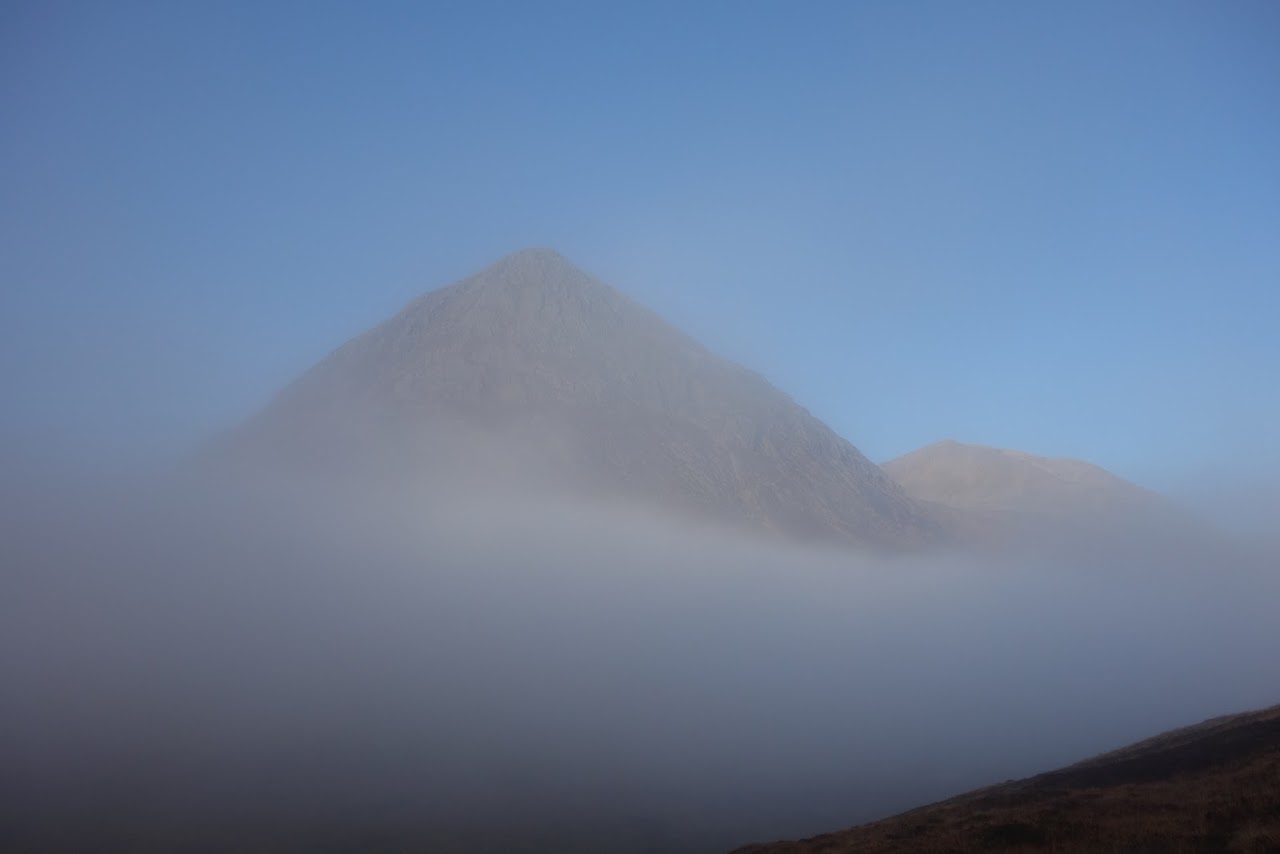 The Devil's Johnson emerges from the fog.

We continued our good pace up to the edge of An Garbh Coire, then turned off the path and crossed the river Dee just above it's confluence with the Allt a' Gharbh Coire. 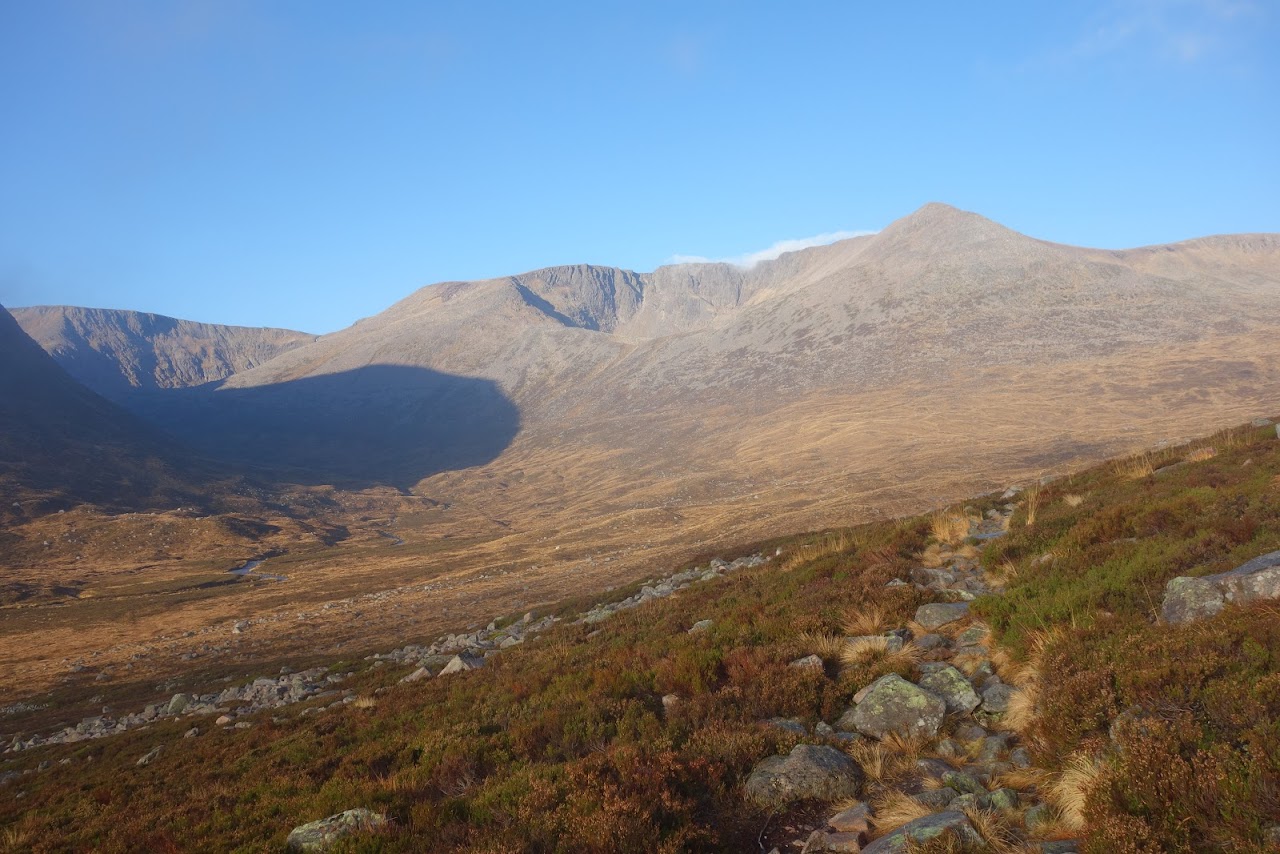 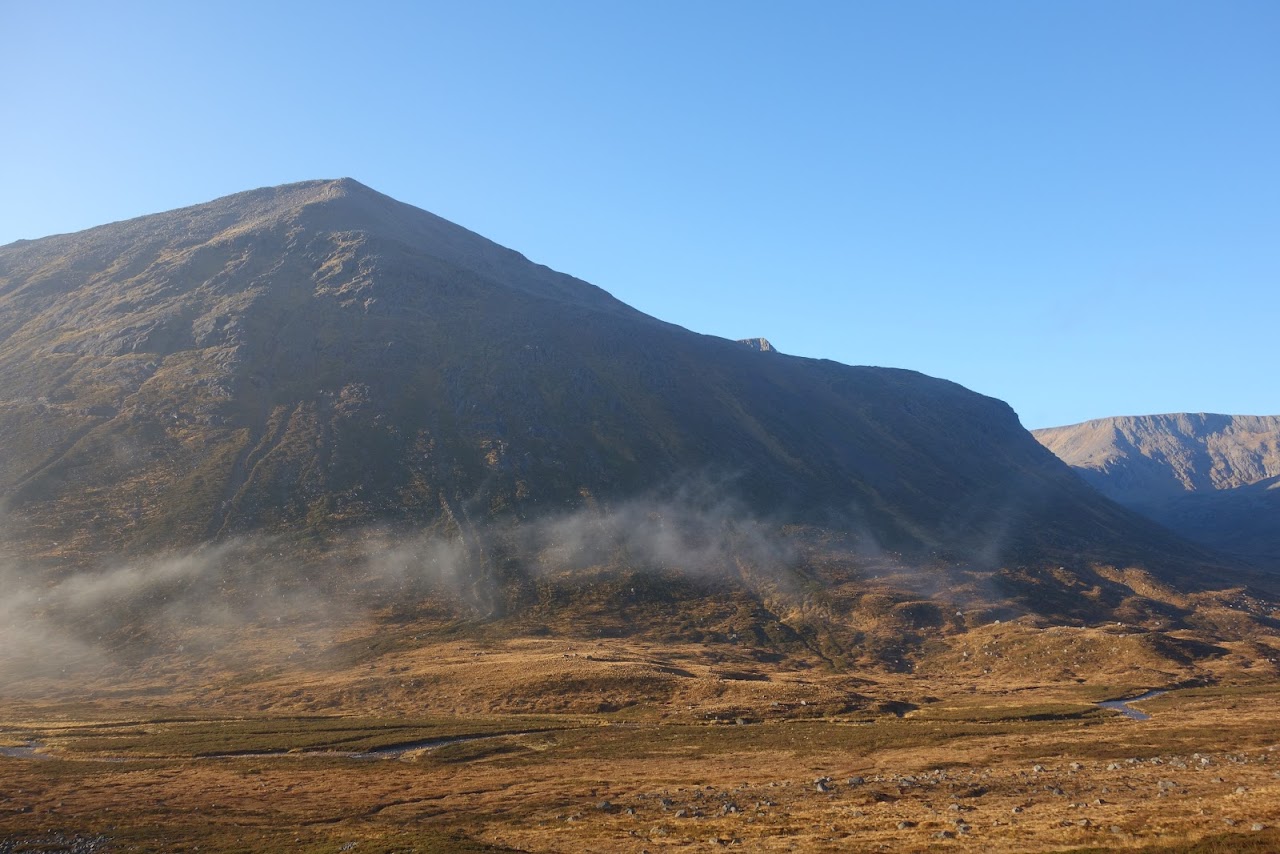 I'm not sure what the 'Official' way of approaching Lochan Uaine is, but we chose to go up the band of scree just to the left of the crags around the outflow. It was a hard pull, steep and loose, but it brought us in short order to the bottom of Cairn Toul's north ridge- a route I would like to do some other time. Then we got our first view of Angel's ridge, and my god was it cherubic. 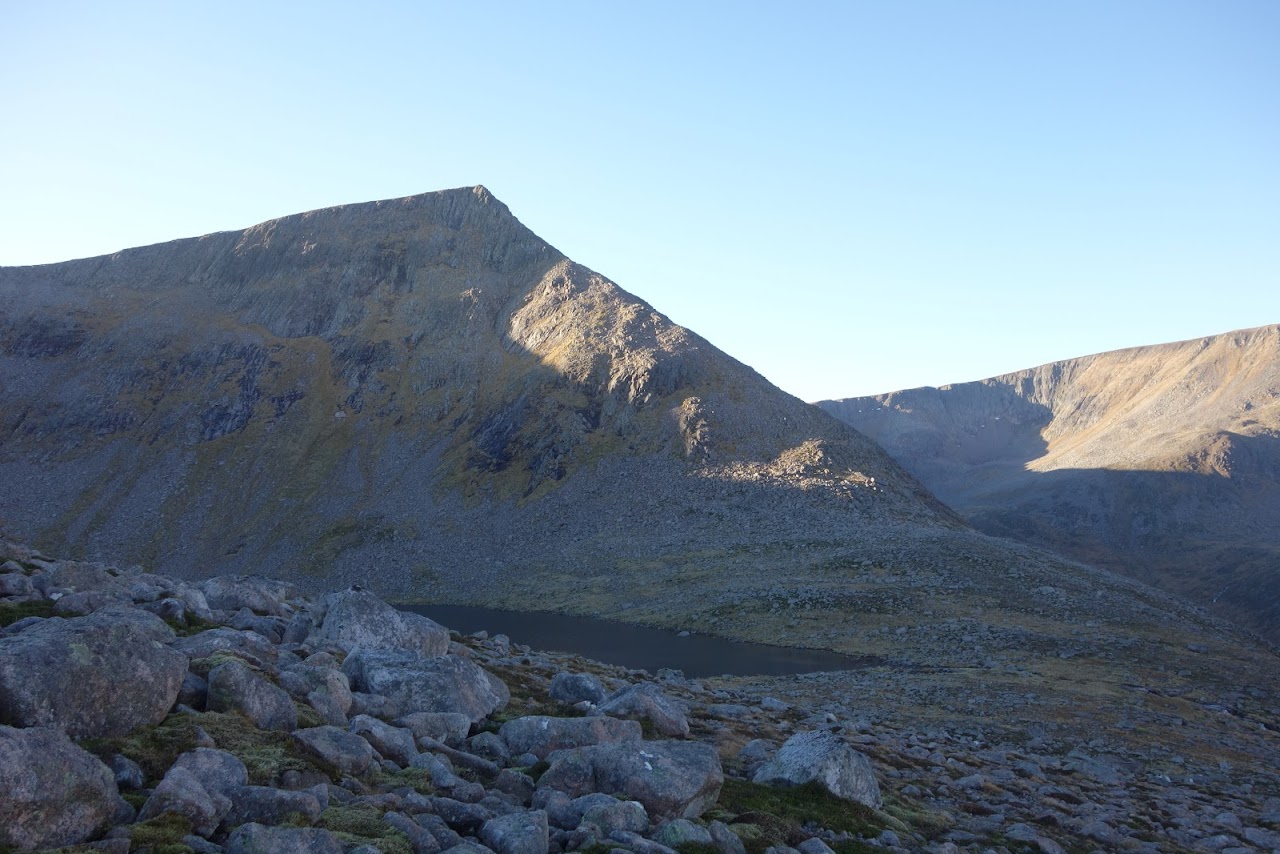 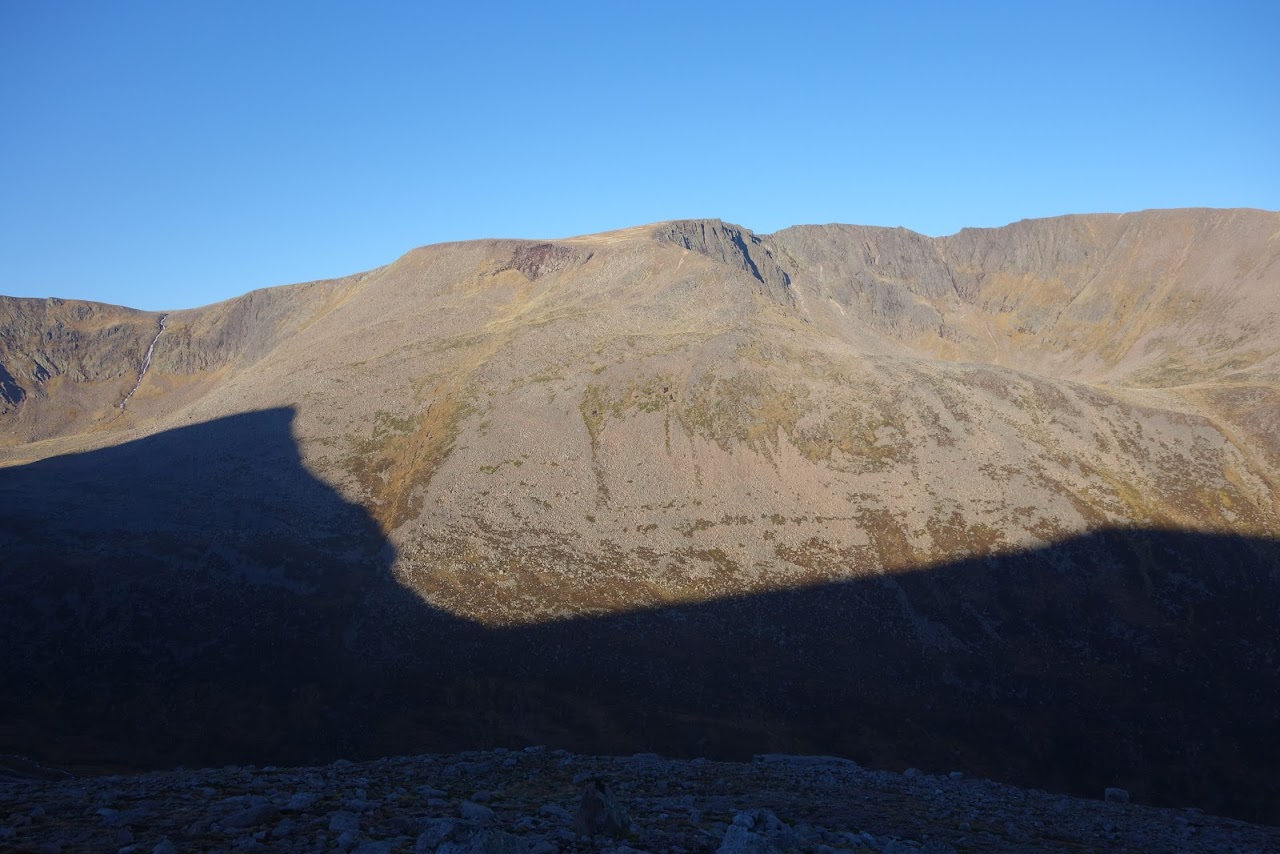 The lower half or so of the ridge was barely scrambling- mostly just scree walking, with the occasional larger step that required a steadying hand on the rock. As we got higher, approaching the 1100 meter mark, it began to consolidate until the last hundred meters were good rock- grippy, with excellent handholds. Alex and Jethro were initially skeptical of the route, laughing when I told them it was given 3 stars by the SMC, but they came around by the end. 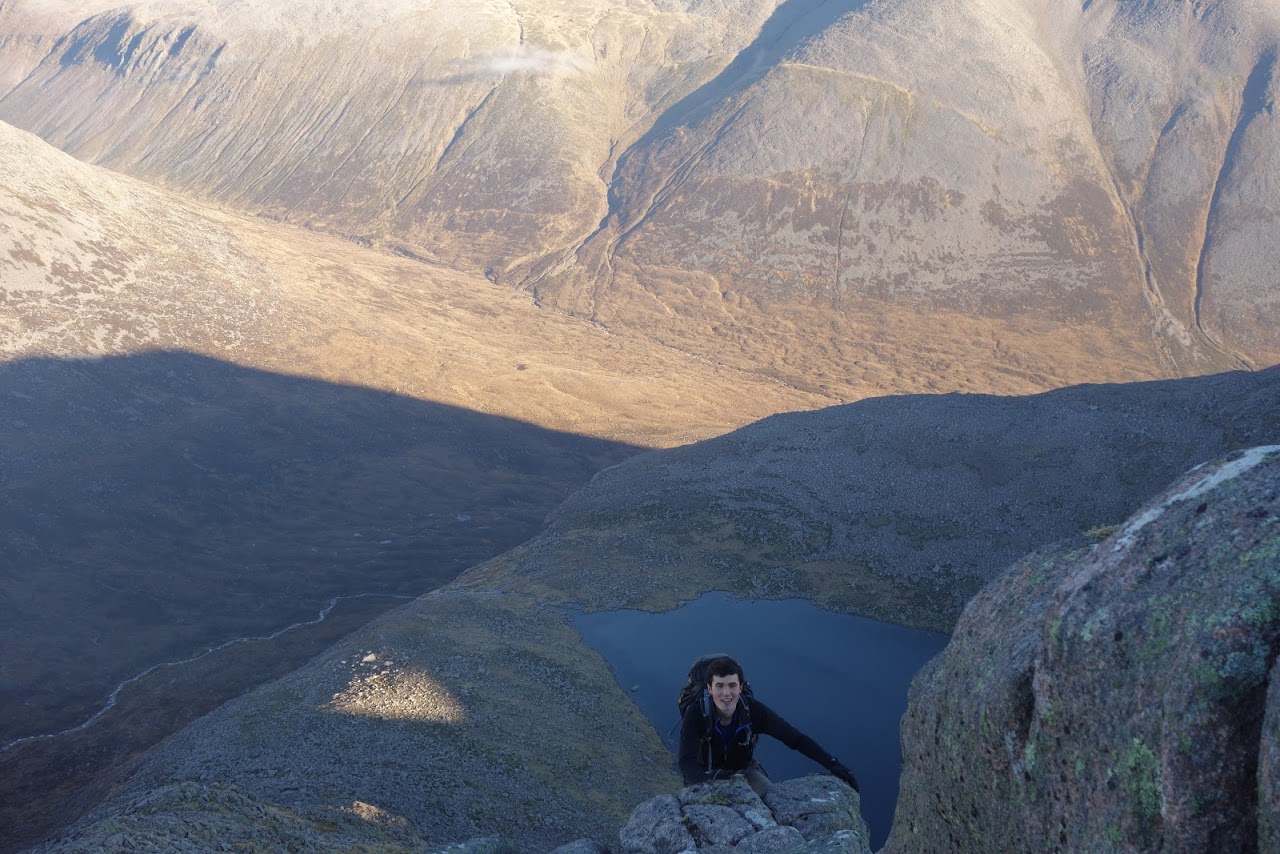 Alex on the ridge. 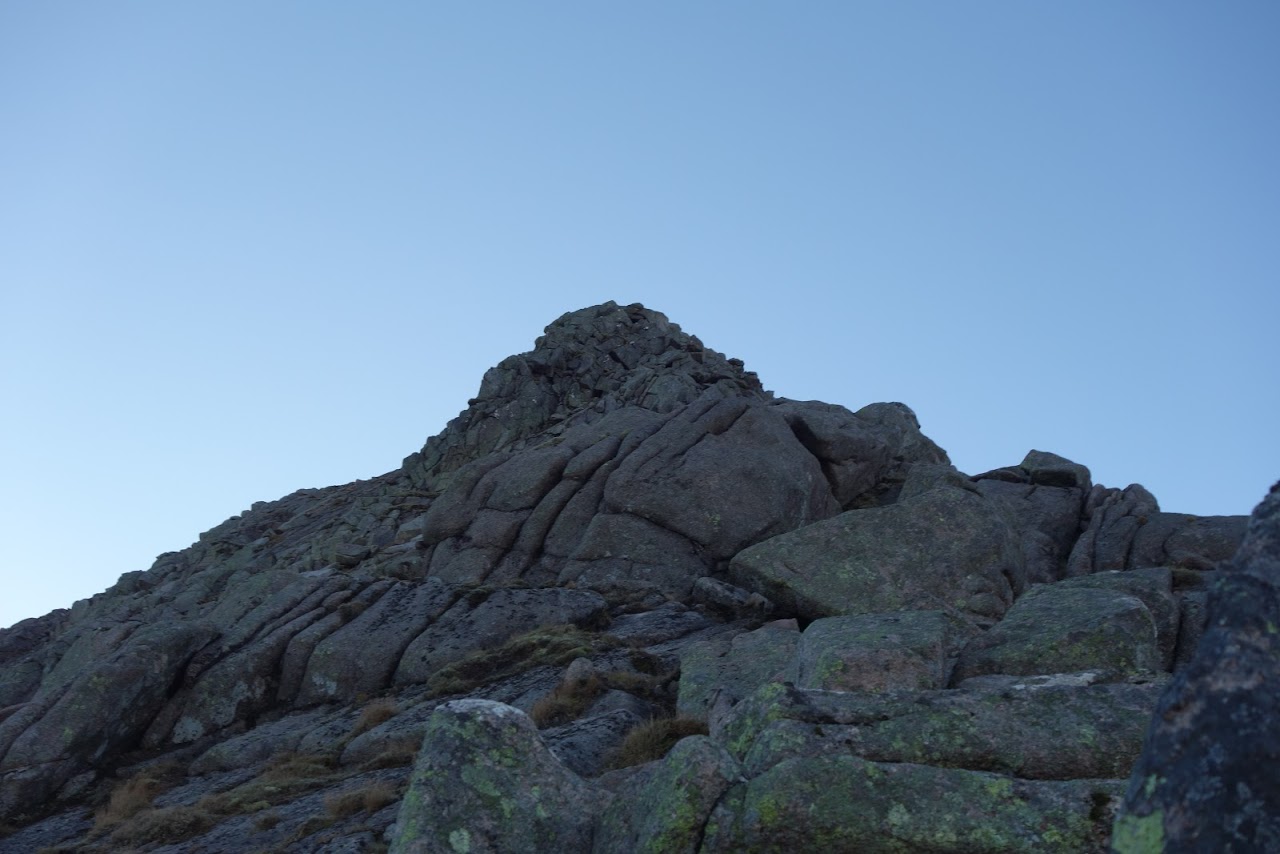 The start of the really interesting bit!

All good things must come to and end, and we reached the summit of Sgor an Lochan Uaine at exactly 12pm. The views were spectacular- nary a cloud in the sky, no, they were all below us! 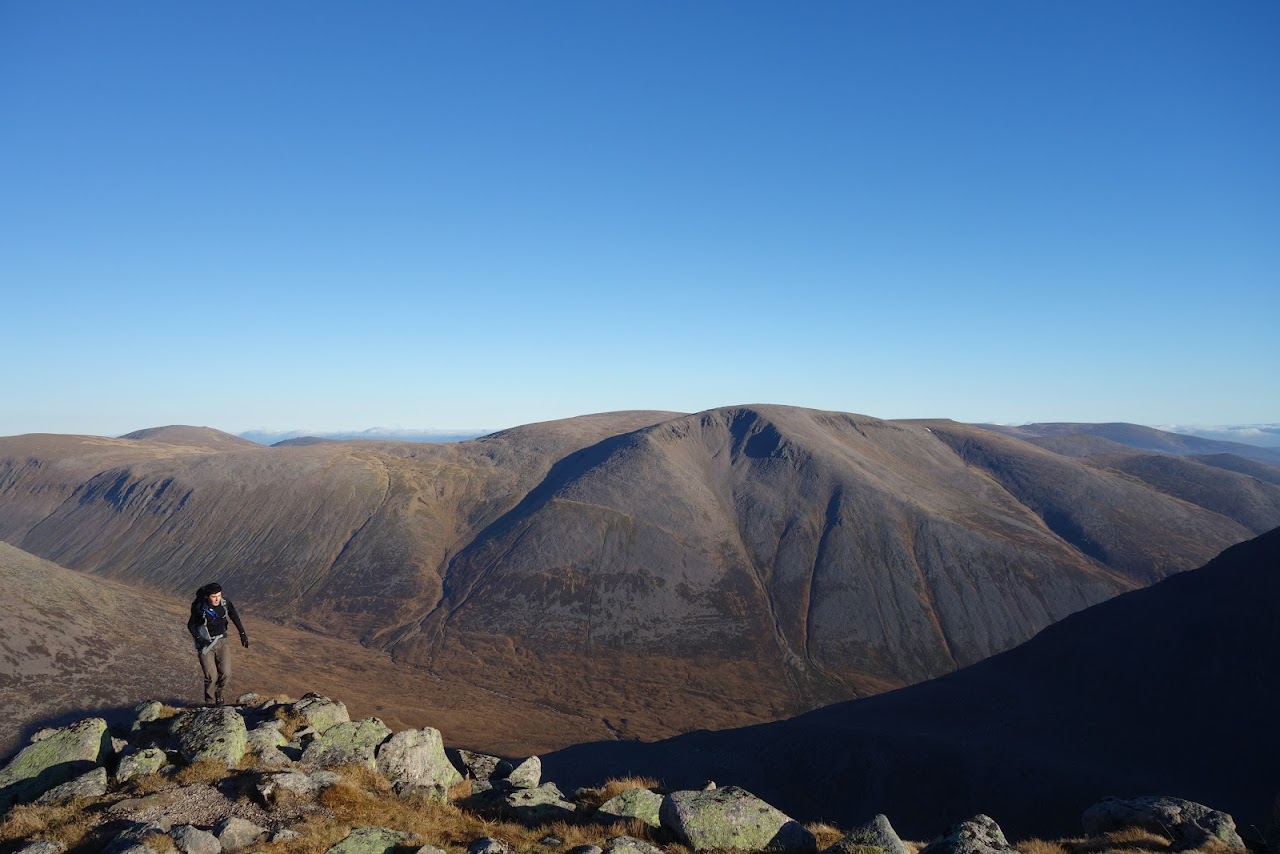 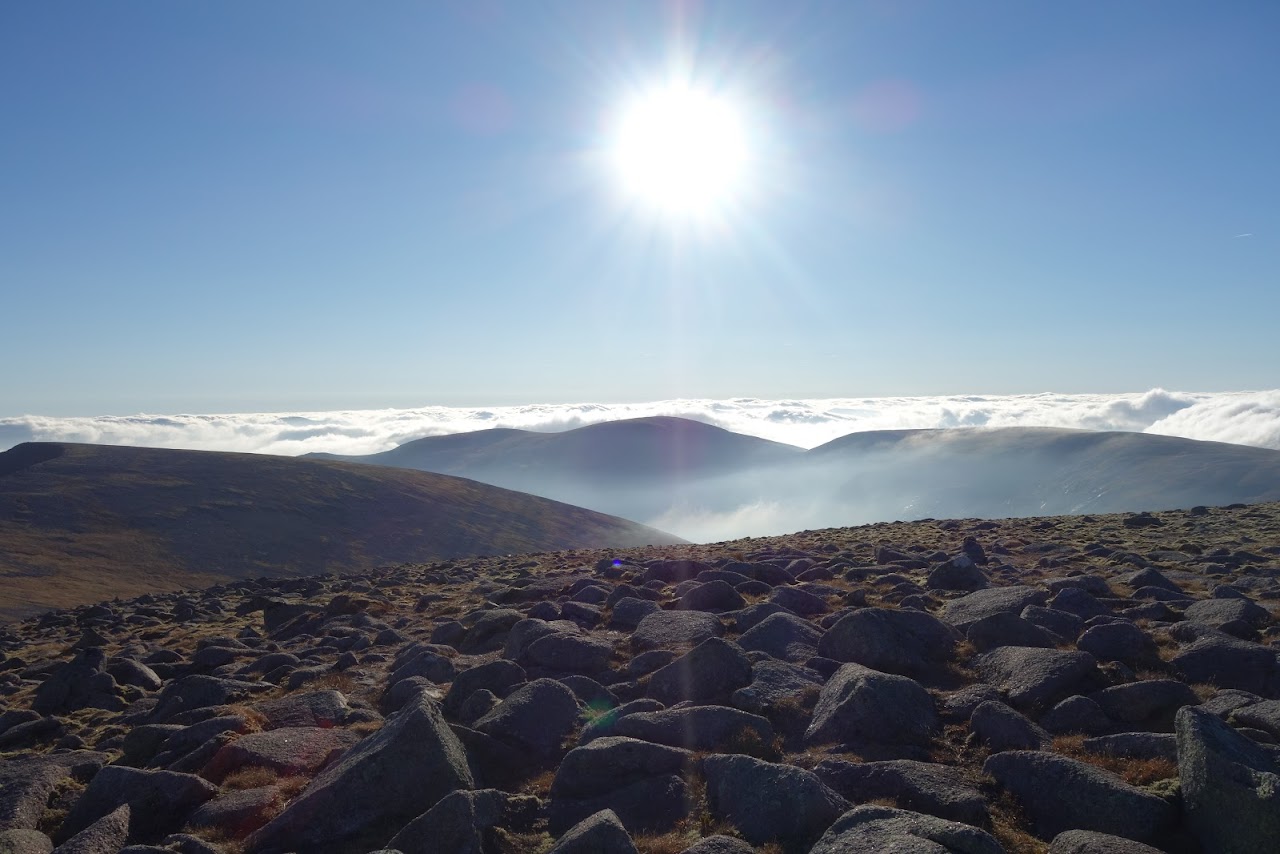 Monadh Mor and Beinn Bhrotain - and an endless sea of clouds. 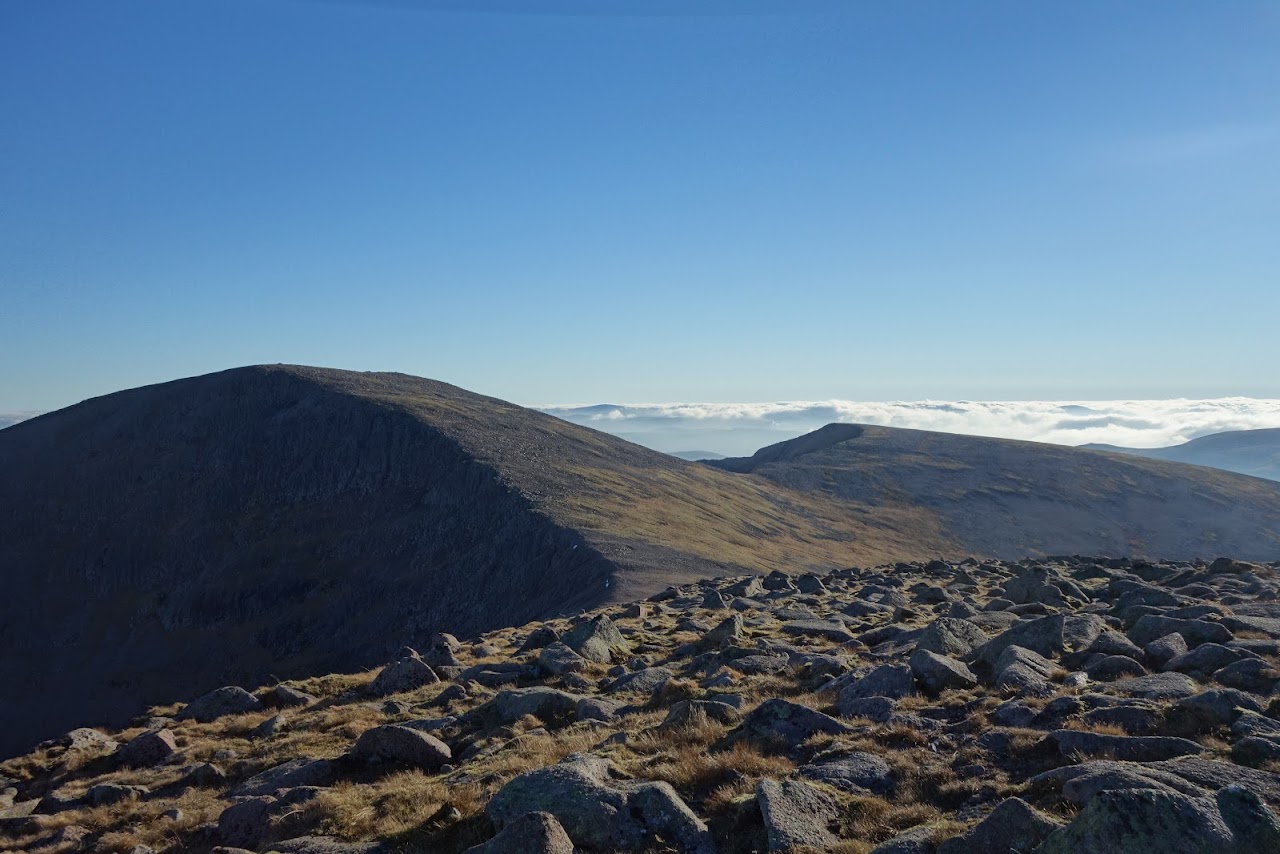 We stopped for a quick vanity shot. 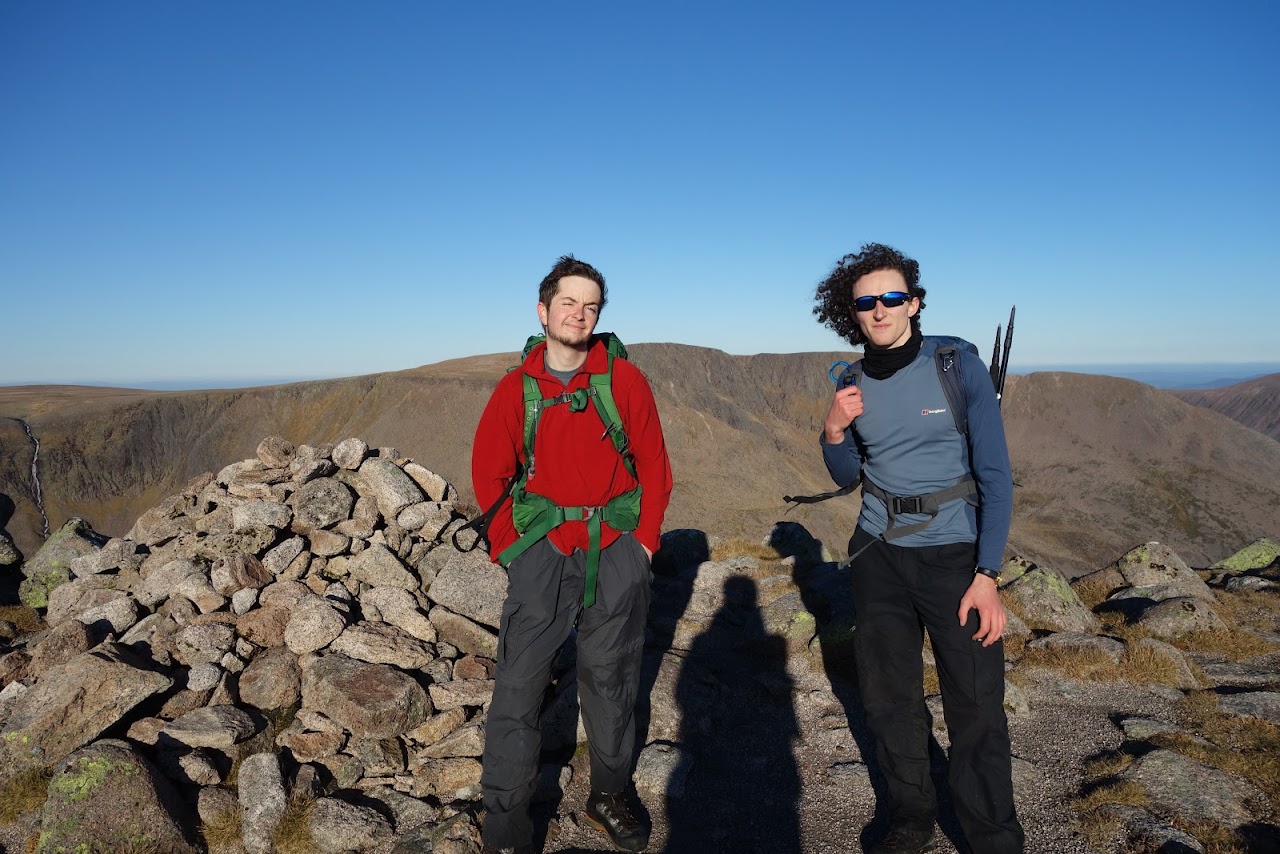 Then quickly made for Cairn Toul, keenly aware that we had just four hours of sunlight left. I was also very aware that I hadn't eaten for almost six hours, and was starting to feel rather fatigued. But Jethro and Alex were happy to go on, and so we agreed to eat lunch on the Devil's Pecker when we got there.
Cairn Toul took less than twenty minutes to reach, but at the summit disaster struck. As I made my way across the boulder field to the summit shelter, I fell and smacked my head on a rock. I picked myself up and managed to stagger over to Alex at the shelter, but blood was running into my eyes and I wasn't sure how bad it was.
We huddled in the shelter while I cleaned the cut with an antiseptic wipe – not as bad as it looked, I was told - and Alex gave me a quick check for signs of concussion. It looked like I was okay, but since we were sat down already it made sense to eat lunch.
Five minutes later we were off again, both myself and Alex somewhat worse for wear (he'd gone over on his ankle twice since we reached Angel's Ridge). The Devil's Wang was still within reach, but it was no longer certain that we'd be off Beinn Bhrotain before night fell. 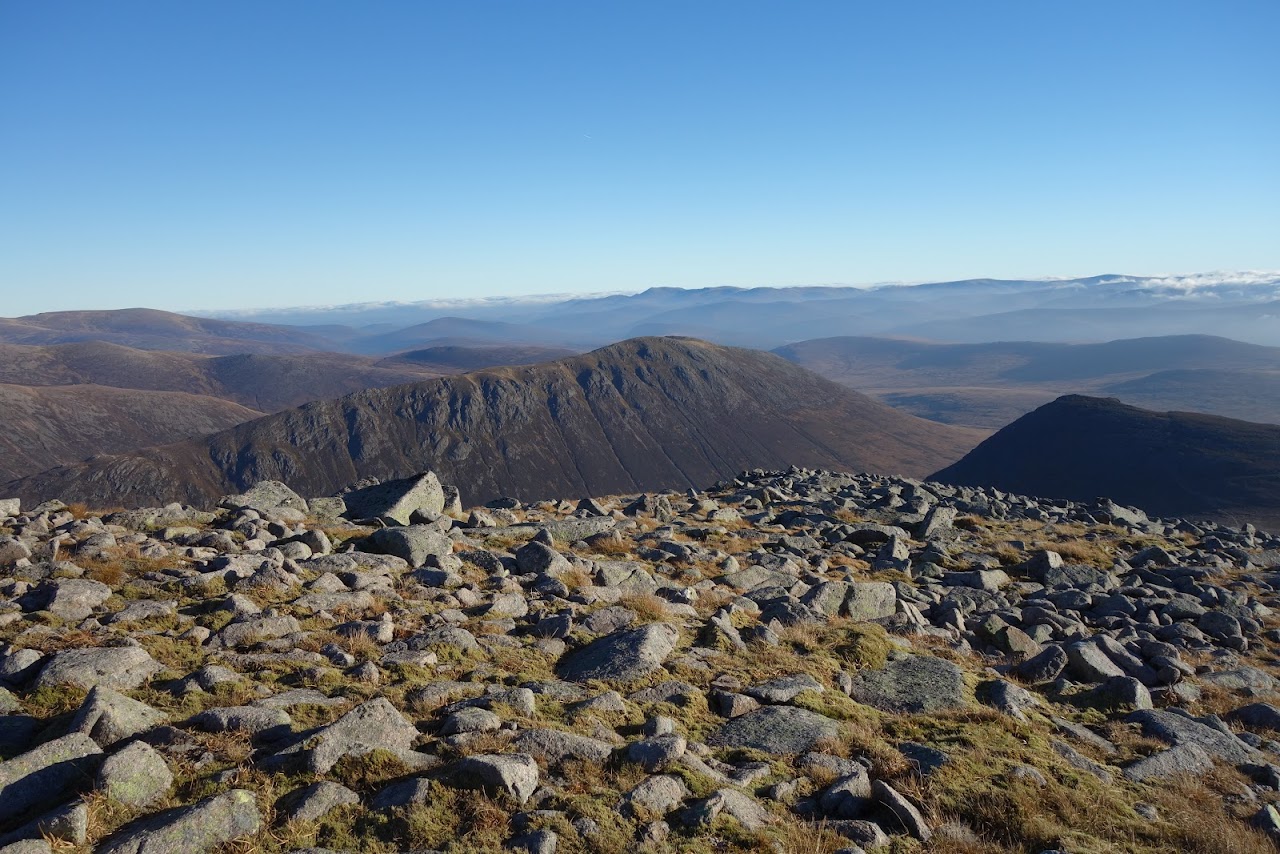 Carn a' Mhaim and the Devil's Schlong.

We reached the target of the day about half an hour behind schedule, having dropped our bags in the bealach. It felt good to finally conquer the mountain which had beaten us back a year ago, but we couldn't savour the feeling for long. After taking a few snaps we were rushing back to our bags to begin the ascent to Buidheanach of Cairntoul, where we contoured round to the outflow of Loch nan Stuirteag. 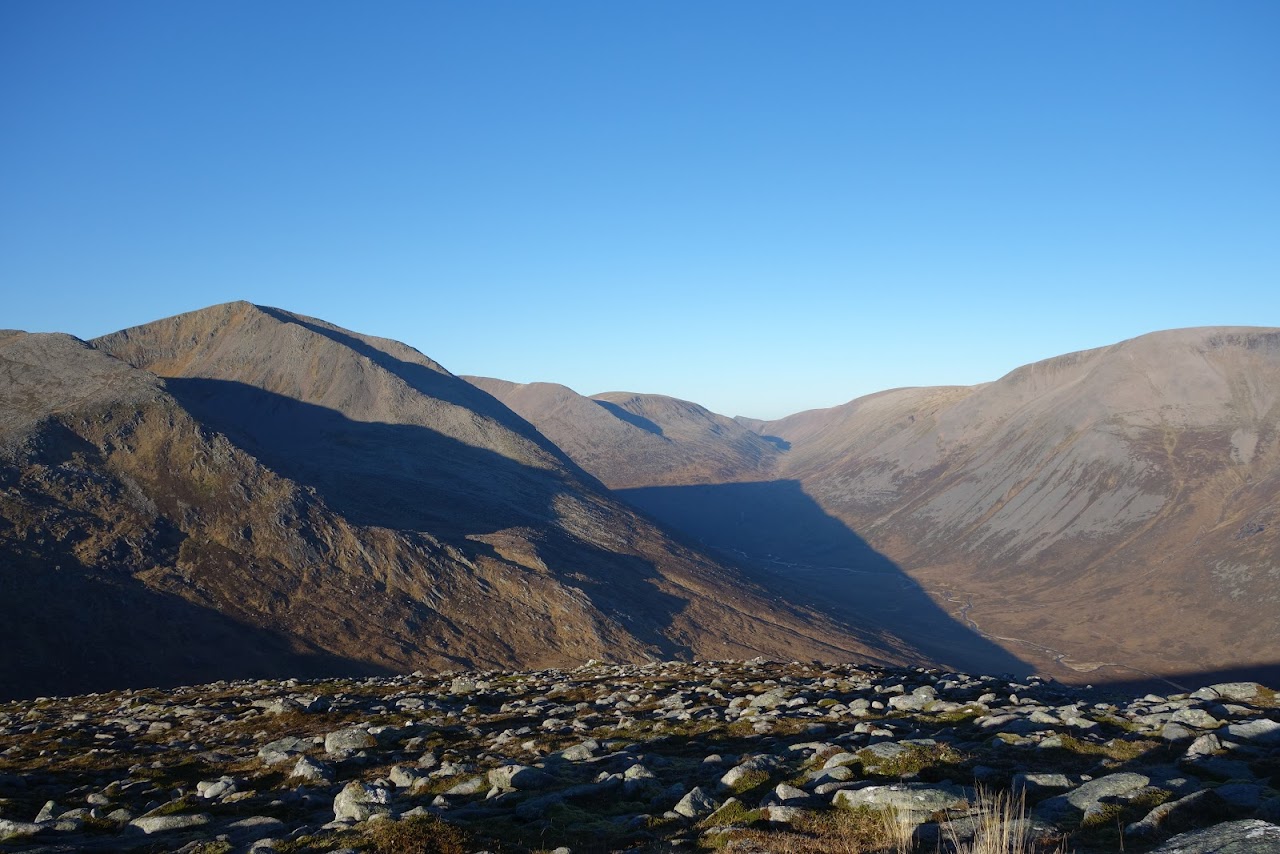 The mountains of the Lairig Ghru from the Devil's Weenie.

Though I'd fallen back on the way to the bealach, we now found that Alex was the slowest in the group – the angled ground playing havoc with his weak ankle. He slowed down even further when we had to cross yet another boulder field to get to the edge of Loch nan Stuirteag. My happiness at for once outpacing him was short lived, however, as he quickly caught up on the ascent of Monadh Mor. (I blame the head wound.) 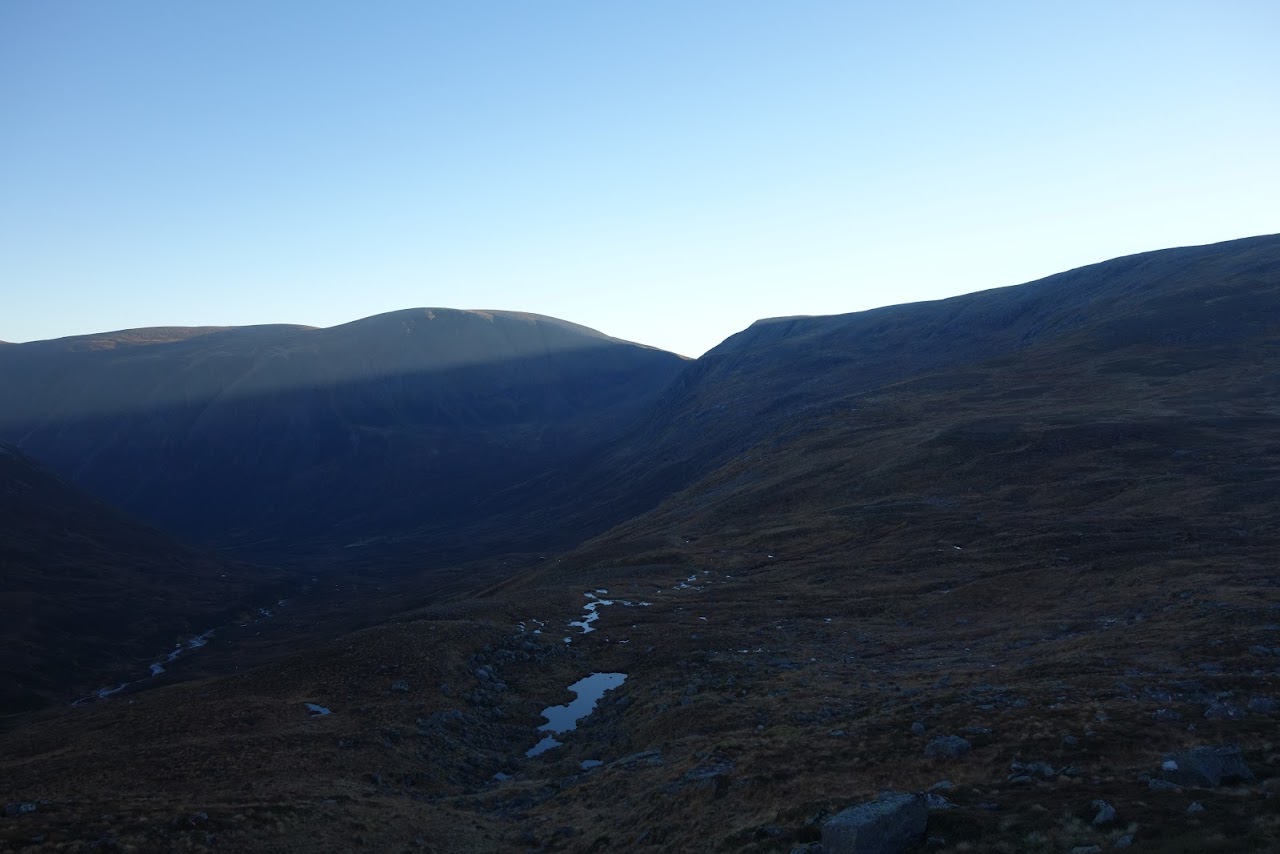 Monadh Mor's summit came at about 3:45pm; we touched the cairn then sped off, very concerned that we were going to be caught out on the summit of Beinn Bhrotain as night fell. 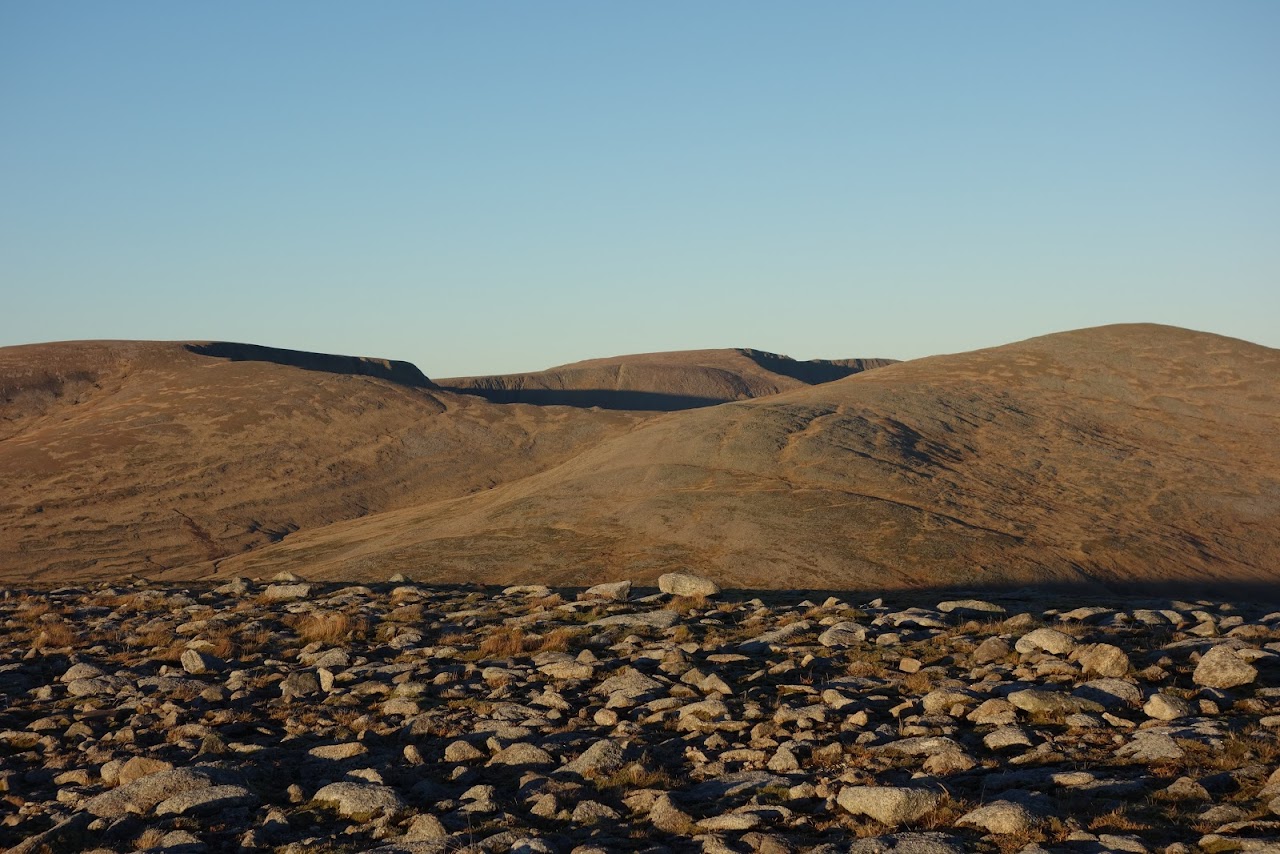 Not so impressive from the west- Braeriach and Angel's Peak. 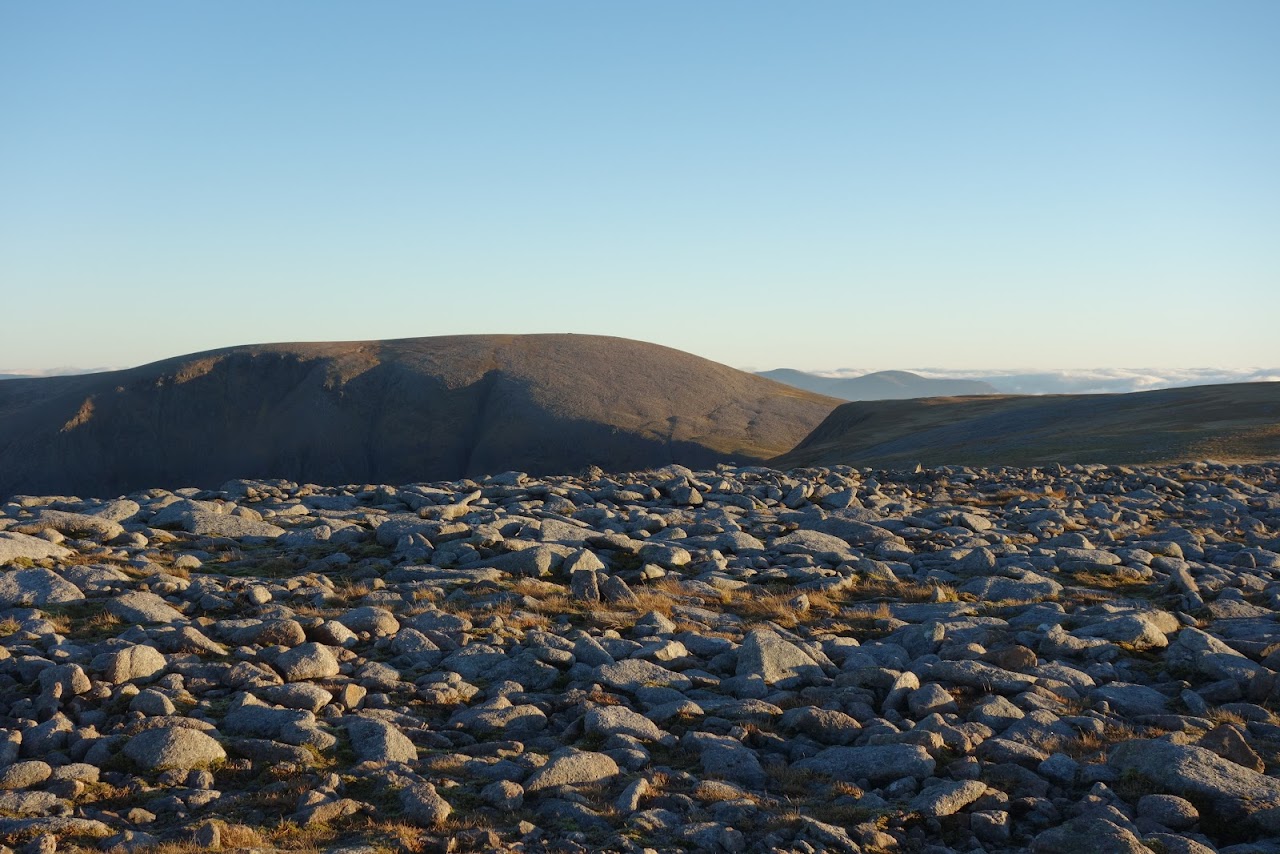 As fast as we went, we couldn't beat the sun, and it set as we were approaching the summit trig of Beinn Bhrotain. It was my first real mountain sunset, and the first time I'd still been walking as the sun set since my MLT. 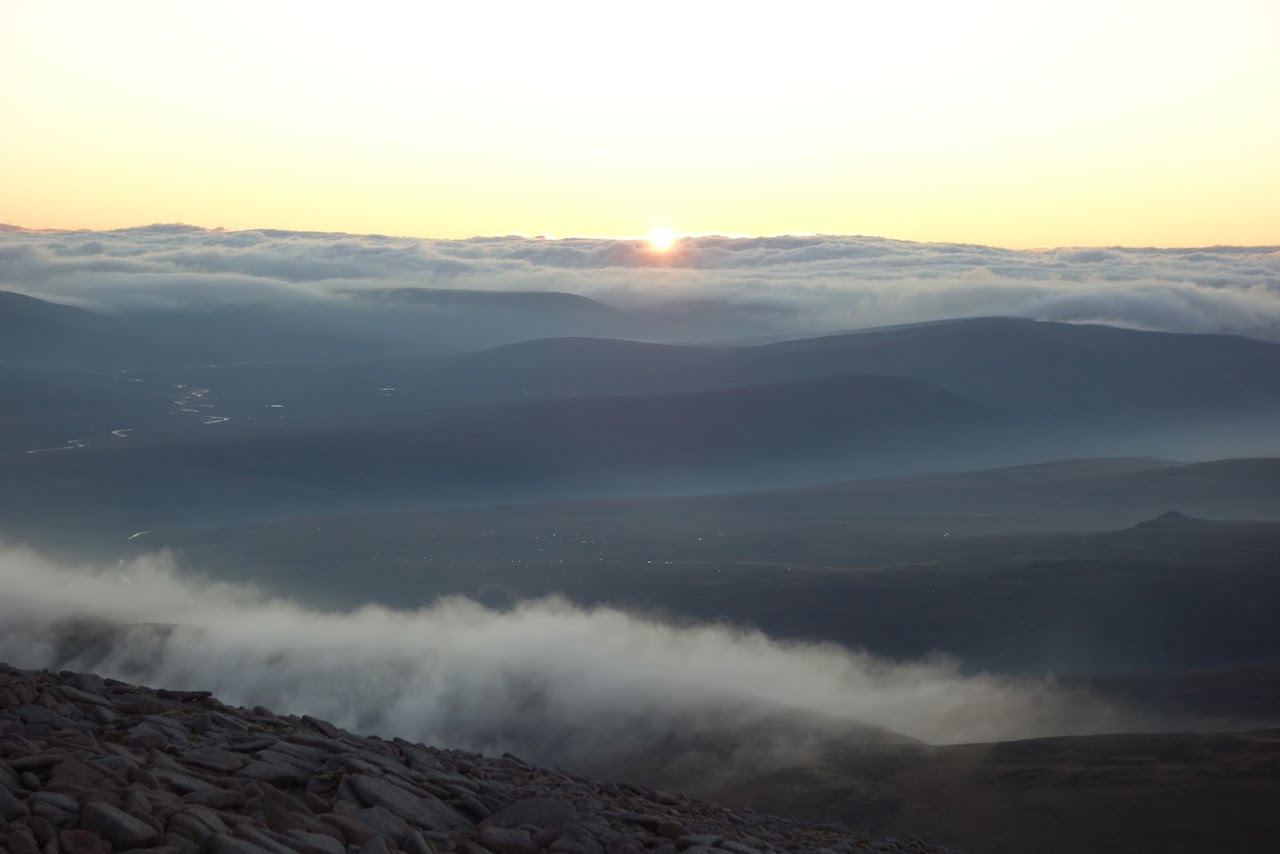 We'd been defeated. The light quickly disappeared and the temperature plummeted as we ate the last of our food in the summit shelter. Headtorches were donned and we set off into Coire an t-Sneachda (the less famous cousin, I assume). So there are no more photos, as my camera was quite useless in the dark and in any case we were too preoccupied with getting back to the car before our friends at the hostel gave away our dinner portions!

I'd like to say the fifteen kilometer walk out went quickly. It didn't; indeed, it dragged on more than any walkout I've ever been on. I hate walk outs, long ones especially. Of course I enjoy the part of the walk in which you're actually on the mountain, and the walk in is enjoyable too as you're fresh, and there's the building excitement as you contemplate the day ahead, as you get your first glimpse of the day's target, and as you reach the foot of the first ascent. But the walk out comes when you're tired, having done all of the interesting parts of the day, and all I wanted to do was eat something hot and crawl into bed.

Darkness was total by about quarter to five. When we reached the white bridge at 7, Alex suggested we turn off our headtorches and walk by moonlight. To my surprise it was actually possible to see where we were going in the cloudless night, and after a minute I found I could see quite well. The peaks of Glen Dee were silhouetted against the stars, and as we rounded the chest of Dee I managed to catch a last glimpse of the Devil's Point against the sky.

Given that when I took my socks off that evening I found blood on them, I think it had the last laugh.