Sunday dawned as Saturday had ended - with a cloudless sky. Assynt is not a place to waste such good fortune in November. The hills beckoned and there was one only a few miles to the north that I had never climbed.

I parked in the layby on the A837 about 2km south of Inchnadamph at NC 24820 20060. The main obstacle of the day, River Loanan, was running a few metres to my west, but after a dry spell was, I hoped, fairly low. Hopping over the roadside fence at the tourist information board I found a 'path' leading to where the river flowed downhill over a wide stretch of cobbles. It appeared shallow enough to cross without taking any precautions. That was a bit over-optimistic because a little water managed to lap over the top of my boots and under my gaiters as I splashed through the deepest section, but it soon warmed up. Using a pair of wellies for the crossing would, I expect, keep feet dry even in more normal wetter conditions. The main danger there is probably slipping on weed-covered rocks and getting a more comprehensive soaking. 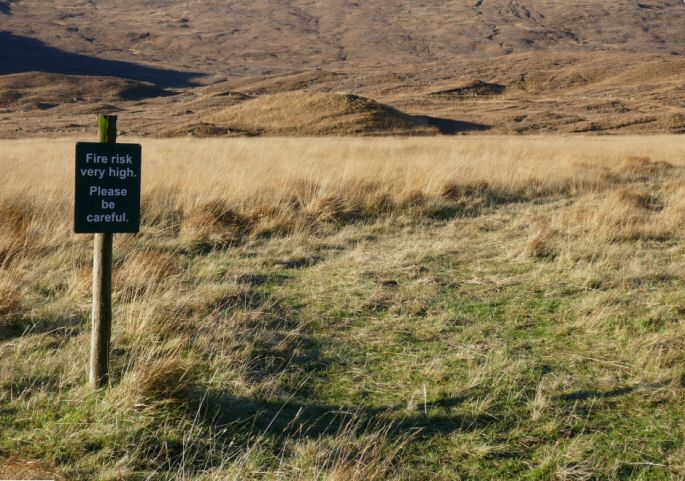 The start of the Land Rover track

About 250m downstream I found the start of a Land Rover track heading west and marked by a post warning of the fire risk. I'd read a report that mentioned the track, and a close look at the aerial view in Bing Maps had found it going over 2km in the direction I wanted. It was hardly visible in Google Maps/Google Earth 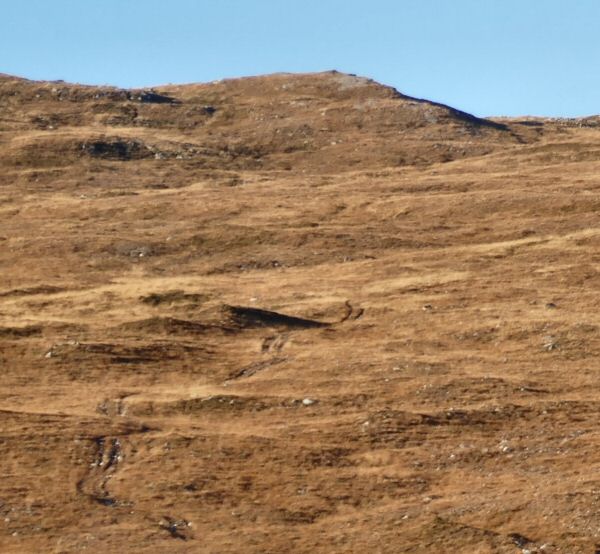 The track winding uphill and over the horizon

It was of variable quality with much of it quite slippery and some short sections best avoided by taking to the adjacent hillside which was amazingly dry for the time of year - almost crunchy underfoot. Beinn Reidh's summit had not been visible from the road and only came into view as the track topped a ridge heading south from the main bulk of the mountain. 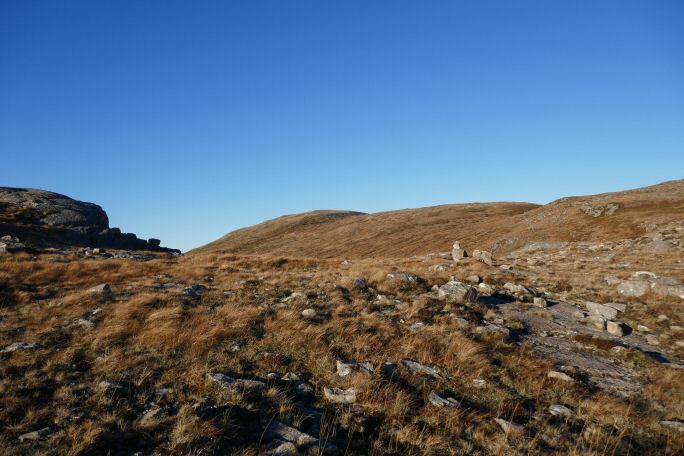 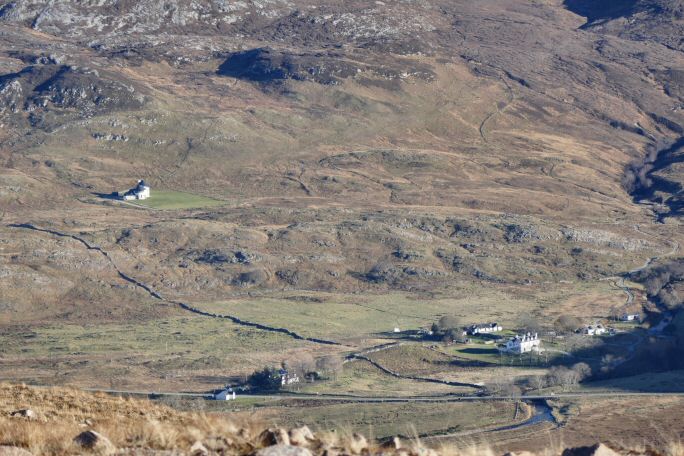 Looking back and zooming in on Inchnadamph

This was at NC 2247 2058 and at 420m altitude. I left the track there - it may even finish there near a small cairn topped boulder - and turned north to follow the ridge up and then round to the west to arrive at the summit cairn after about 1.5 hours. It is a fine viewpoint though everything to the south was in silhouette with the sun low in the still cloudless sky. 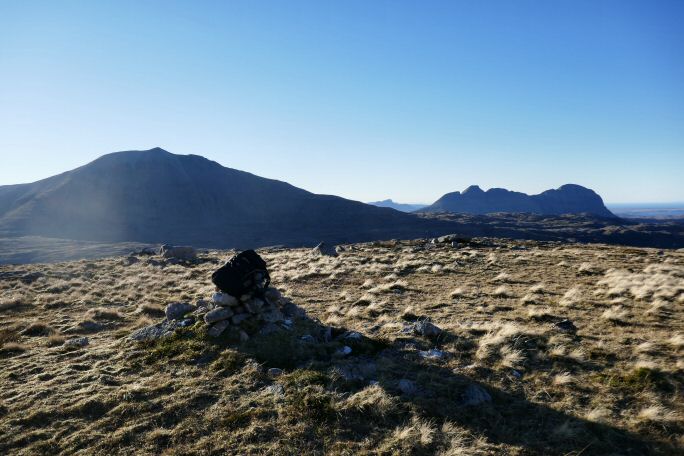 Canisp and Suilven silhouetted against the morning sun from the summit 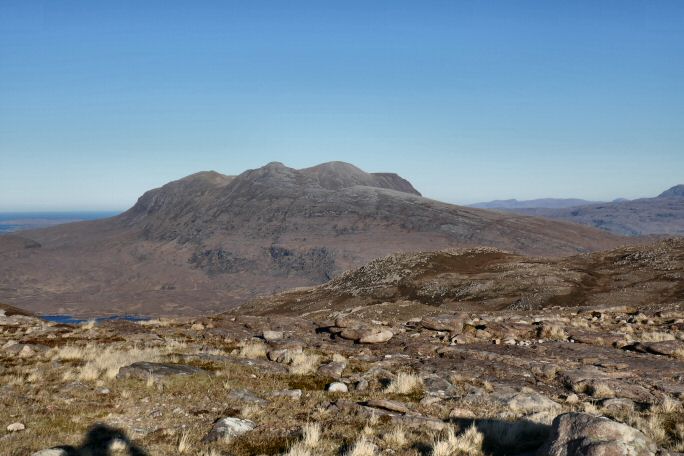 After a short stop I jogged back the way I had come, but slowed when I found just how slippery the track could be and sledged down several metres on my rucksack as my feet shot away from under me. 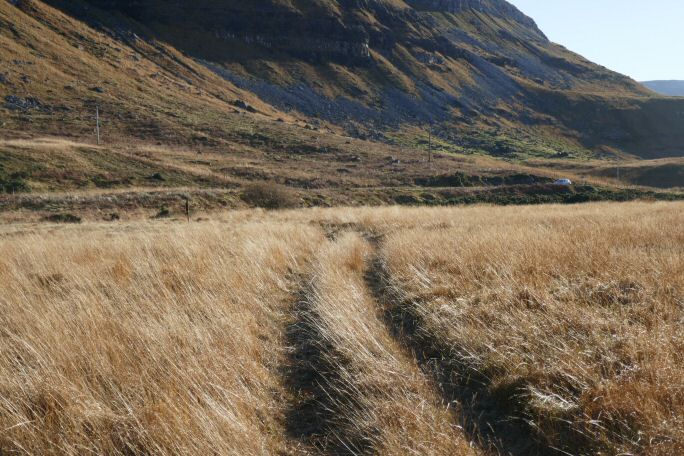 Almost back at the river, a wade, and dry feet waiting in the car.

When I arrived back at the river I looked at the ford where the track forded it. It was a lot deeper than where I'd crossed, but not far above it there did appear to be a shallower section. I tried that only to find it too was quite a bit deeper. With the car and dry socks and trainers only 100m away I waded it anyway to complete a really fine morning's walk. The sun had been constant, the track a useful guide and the river crossings easy. I had seen nobody else and nothing moving anywhere on or over the hill, only an occasional vehicle on the distant road. In a bit of a rush I neglected to take a photo of where I'd crossed the river. A few weeks later I was back in Assynt and took a snap showing where I'd crossed. 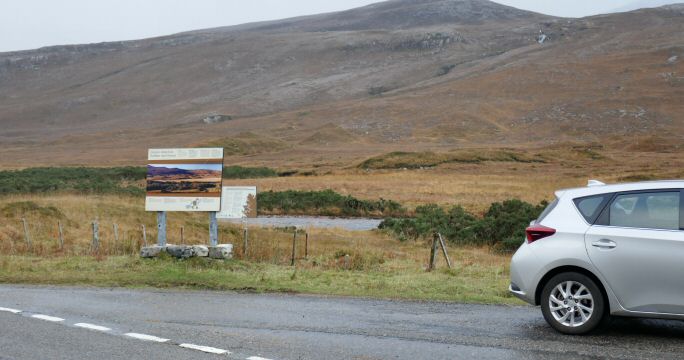 and another of the crossing. After really heavy rain in the previous two days this was quite a bit higher than when I'd crossed, but still looked fordable in wellies. 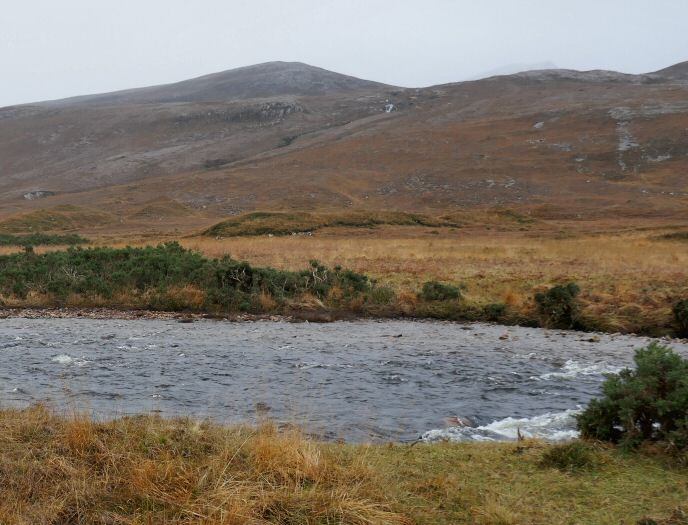 The River Loanan eighteen hours after two days of rain