One Pap and a flock of tits :)

One Pap and a flock of tits :)


With superb weather last weekend, we decided to do two days of hillwalking. On Saturday, I insisted on driving down to Glen Coe to climb a new Graham, possibly the last new one this year. Our Graham map consists of two parts: in the north, it's all blue with an occasional single red balloon, in the south - the opposite pattern. The only shorter walk left in Glencoe area was The Pap so that's what we headed for

For the following day, we were planning the traverse of one of Achnashellach Munros.
Sgurr na Ciche on its own is a half-days route to be honest, but Kevin said he wanted to save strength for our Sunday Torridon Adventure, so a quickie down south was a welcome option

Our route followed the standard up-and-down on the eroded path from Glencoe village:

Track_PAP OF GLENCOE 17-11-18.gpx Open full screen  NB: Walkhighlands is not responsible for the accuracy of gpx files in users posts
We took 2 hours to drive down from Inverness, so it was half past nine when we arrived in Glencoe. The car park in the forest was nearly empty, though. We spent a few minutes photographing birds picking nuts and seeds from the provided feeders. A whole flock of tits, both fully grown adults and juveniles (this summer offspring I guess), but also a few robins and chaffinches. 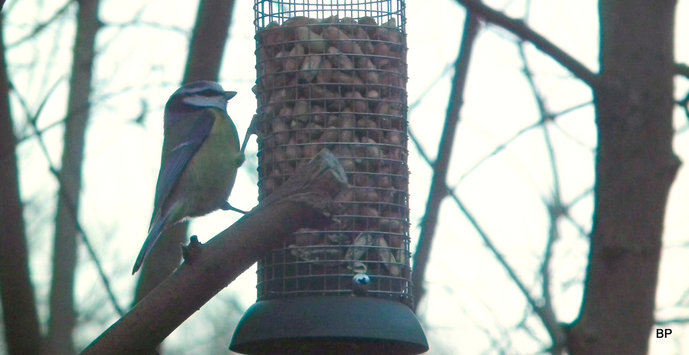 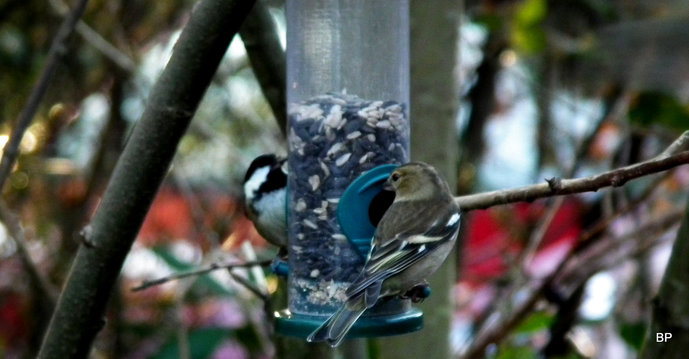 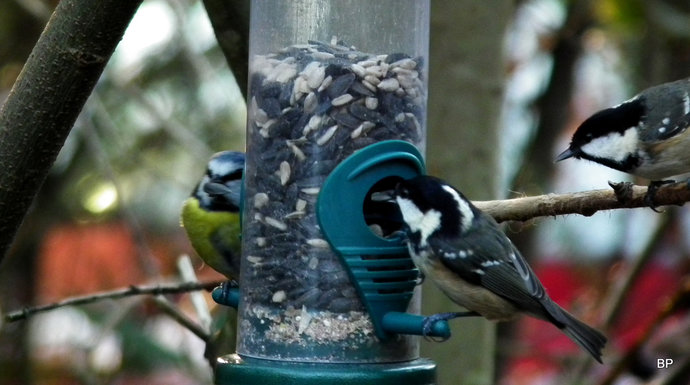 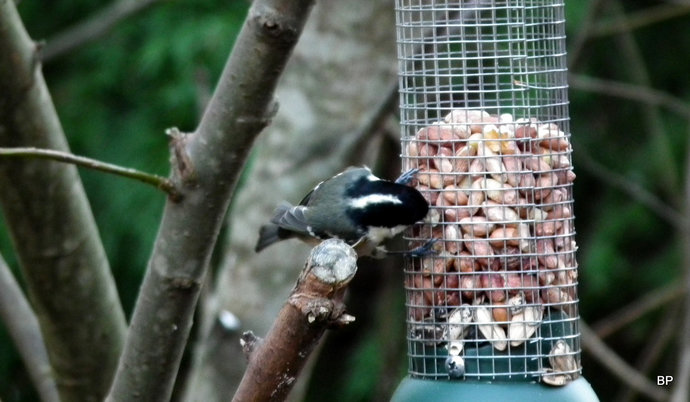 As watching tits playing on the nearby tree is a good entrance for mountain p*rn, we didn't waste time and headed for what is said one of the best viewpoints in this area. I was in happy-go-lucky mood, jumping on the path and exhibiting all symptoms of advanced mountain madness: 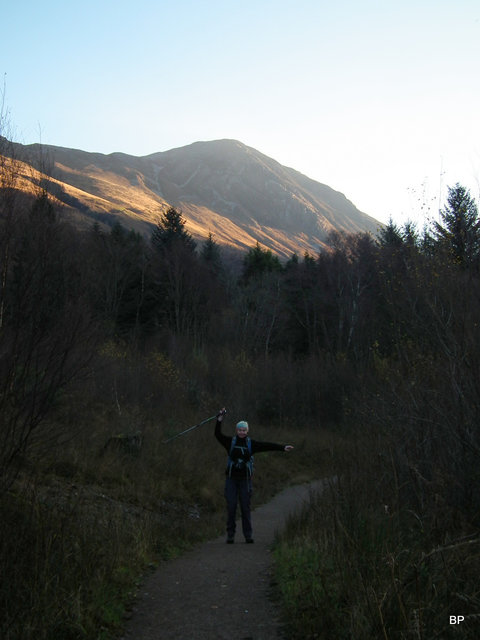 After a short march on the path along the road, we turned left, uphill towards the Pap. The route is well worn and in places very eroded, which is no surprise considering the number of walkers trudging up and down that path every year! 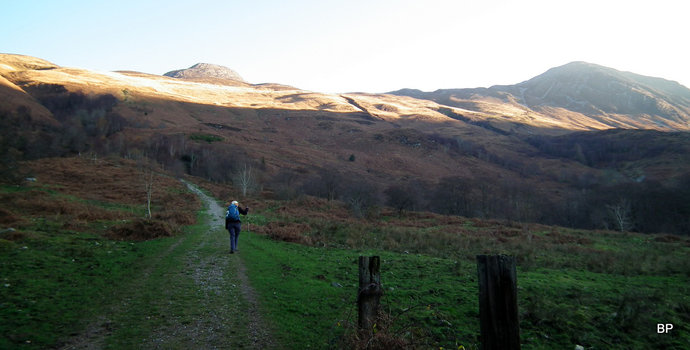 The sun was rising in the east, from behind the sharp shapes of Glen Coe peaks, simply stunning. I stopped and enjoyed the spectacle for a minute or two...

...before locating the bridge over the first stream, where the path turns right.This stage is quite muddy, and that thanks to our friends the cattle (seen here behind me, grazing just off the path): 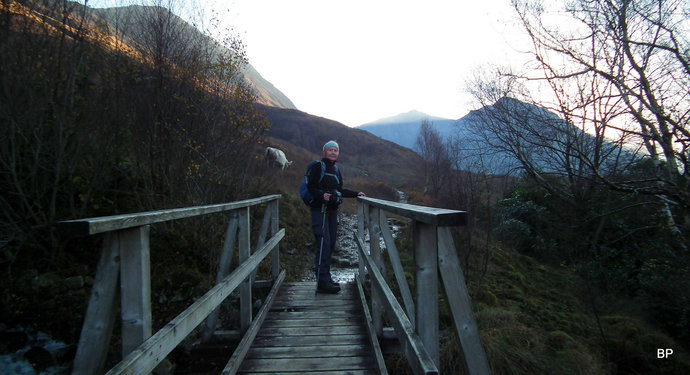 We continued on the path, which soon crossed a second stream (no bridge this time) and soon started to ascend steeply up the sunny slopes. Weather was really exceptional for this time of year. Kevin was lagging behind, taking countless photos and adjusting his boots, before eventually finding the right combination of socks/inner soles. I didn't rush him, we had time in abundance, and the scenery was breathtaking.
Garb Bheinn across the water, something to do in the future:

Eroded, but not really a scramble:

Just over the height of 500m the gradient eases off and walking becomes less tiring, with views getting even better. I couldn't resist a pose with the summit of Sgurr na Ciche in sight: 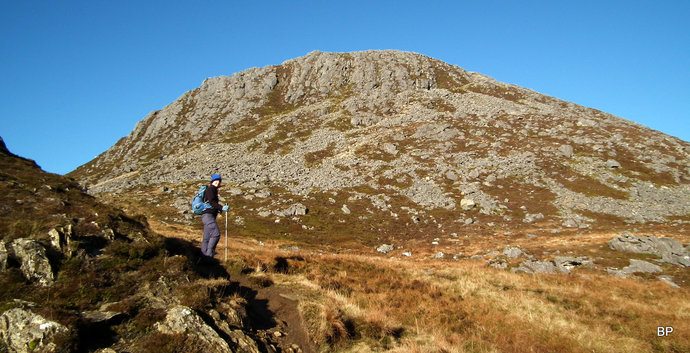 The top of another Garbh Bheinn, also a Corbett, still in cloud. We did this hill last year in November, and it was already covered with a few inches of snow. Today - not a flake:

Meall Mhor and Sgorr Dhearg to the south - with a great game of light and shadows:

The final 100m of ascent is again steep and very rocky. The path is eroded and tumbly, so of course Kevin had to lead me astray and for some distance, we left the worn out path to traverse above it on the rocks - easy scrambling in places, but mostly boulder-hopping.
Panther enjoying the easy scramble: 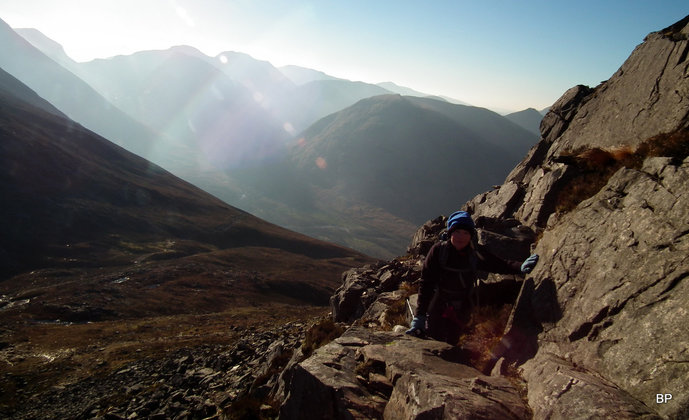 At some point, we met the path again, now it was a matter of keeping the balance on the scree

How far to the summit? 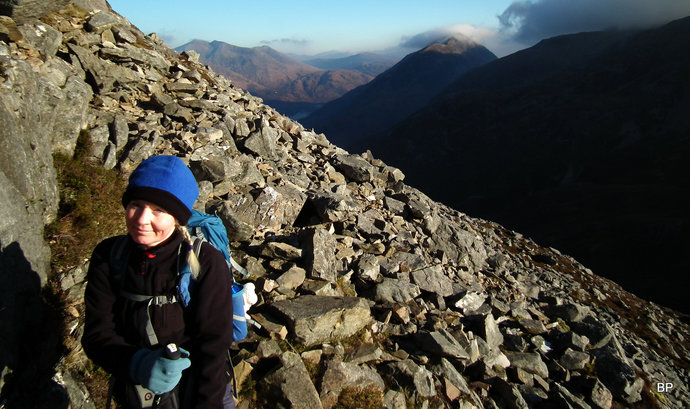 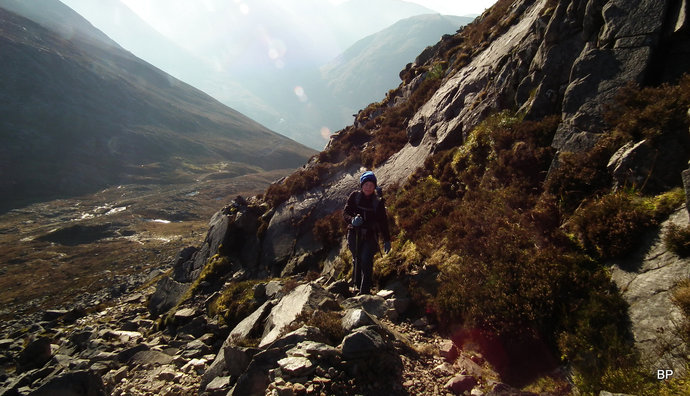 ...as did the game of sun and shadows above Glen Coe mountains:

Finally, we emerged on the flatt-ish summit of Sgurr na Ciche. Graham no. 107! Not far from the half way point now. Lucy celebrated her 75th Graham: 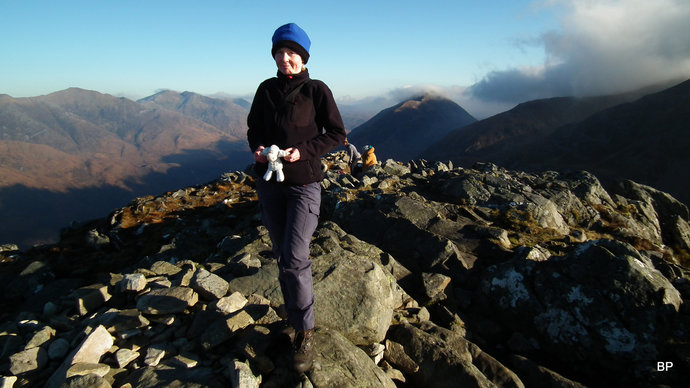 As far as Grahams go, this is one of the best ones when it comes to views. We spent a lot of time photographing and filming, despite cold breeze. Other people started to arrive, but we managed a good set of photos before the summit got too crowded.
Panoramic views to begin with...
South-west along Loch Leven:

The Mamores and Ben Nevis:

Zoom to Garbh Bheinn (the Ardgour one):

Beinn a'Bheithir across the loch:

The peaks of Glen Coe once again:

We descended the same way, this time sticking to the path (it makes little difference really). We met dozens of walkers on their way up. Some were giving us odd looks, as we were still wearing hats and gloves (the wind was very nippy on the summit) and they walked up in thin tops

Indeed, the difference in temperature between the summit and the lower slopes was remarkable.
We returned to the car with big smiles. A new Graham, a good shorter day and superb views. All thanks to one little Pap.
What a lovely day it was

On Sunday we woke up early and drove to Achnashellach, to visit one of my favourite ridgewalks in Torridon. TR to come soon, loads of mountain p*rnography included

Quality photos and an enjoyable read BP, Saturday was a great day to be in Glen Coe as Iain and I were on Stob Coire Sgreamhach & Bidean nam Bian while you were across the glen from us. I didn't take my zoom lens to save weight for the big hike otherwise I might have zoomed in and got some shots of all three of you on the Pap!

Looking forward to visiting that hill, the views look brilliant from it. I went out the following day too up Ben Vane, great fun, but it was my "easier" walk after BnB.

Chris Mac wrote:Quality photos and an enjoyable read BP, Saturday was a great day to be in Glen Coe as Iain and I were on Stob Coire Sgreamhach & Bidean nam Bian while you were across the glen from us. I didn't take my zoom lens to save weight for the big hike otherwise I might have zoomed in and got some shots of all three of you on the Pap!

Looking forward to visiting that hill, the views look brilliant from it. I went out the following day too up Ben Vane, great fun, but it was my "easier" walk after BnB.

It was a brilliant weekend, superb weather, no wonder everybody was out and about!

The Pap is a gem despite modest height. Shame the walk was far too short, but we were saving strength for a longer walk in Torridon the next day

You were probably on the summit as I drove past

. Great views from here - I was going to go up for sunset on Sunday afternoon, but it was a bit too late by the time I passed.