Up until now I have been a three-season hill walker. However, for a while now I have been admiring winter pictures of the hills. So it was about time to try out some winter hill-walking myself. I took a few days off from work and after studying the weather reports decided on the west highlands as at that time most of the snow was falling in east Scotland - and I didn't really fancy getting cought out in a blizzard during my first winter walks. I thought Beinn Odhar would be good for a try - easy to reach with public transport, not too high, but still offering good views as reward - and it sure didn't disappoint.

I set out from Tyndrum on the WHW as far as the bridge over the rail way, and was quite surprised to face an almost grassy slope - not much snow (yet) on the south face. It was probably all for the better, as I still had to get used to walking in the cold and with a much heavier rucksack than on summer day trips. The walk up on the south-west shoulder was quite straightforward; every now and then there were even traces of a path. 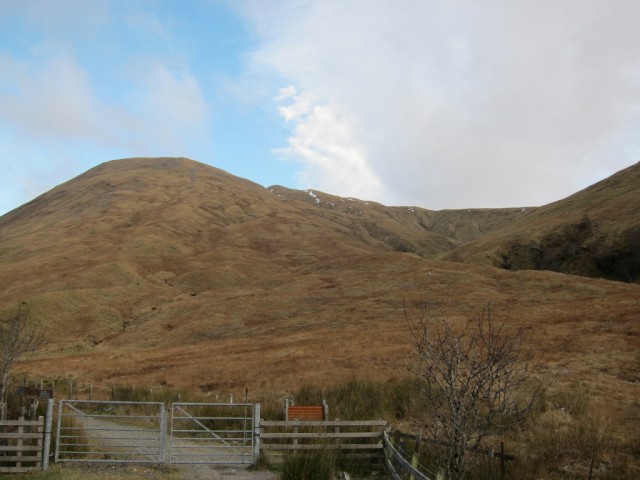 The first highlight was reaching the lochan at about 140m below the summit. The views opened up for the first time, but out of a sudden I was also standing in a pretty chilly wind. Not much further to go now so I pushed on and soon I reached the summit cairn. There were great views in all directions, and I only regretted that I could not linger as long as I normally would have because it was getting quite cold in the wind. I took the south-eastern shoulder down towards the second lochan, and then continued on the grassy ridge over Meall Buidhe and ultimately descended at Auchtertyre farm. That way I could enjoy the views south to the Crianlarich hills a bit longer without getting too cold. The sun was shining directly in my face so I didn't realise at the time that the views extended as far as Ben Lomond - but back home I spotted his characteristic shape on the pictures of

Going was easy on the frozen ground, it might have been a different story in the summer, I suspect it would be quite boggy then. Walking direction for the rest of the afternoon

So all in all a really great first winter walk - and sure not my last.

Fantastic views from up there, aren't there? I thought that ascent was a bit of a killer when I did it in July. I kind of fancied the little lochan as a wildcamp spot but unfortunately had to put a bit more distance in that night and ended up camping at the top of Beinn Chaorach.

I think it looks a great hill - I've had my eye on it for some time - even before I started Munroing, so thanks for the report and pics.

Definitely very nice views from the top! Can recommend it for a winter outing specifically - I thought it was nice and easy to climb up because the ground was frozen; going up I was thinking it must be much harder at times when the ground is not frozen. The south-east ridge will turn into a bog in the summer, and then I would avoid it. But camping at the lochan - there's a thought...