After an excellent day on Beinn Liath Mhor the previous weekend, we hoped for another nice one for repeating Sgorr Ruadh before days get too short. But weather wasn't entirely on our side: Sunday the 25th was said to be very windy and cold. We still wanted to give it a go, but sadly, Panther's aching stomach forced us to change our plans. It was time to look for an easier route. We decided to visit one of Torridon Grahams, Beinn a'Chearcaill. We had already climbed it and in winter conditions as a Christmas "treat" a few years back, but this wee hill is just as exciting as any other mountain in this area. Well, situated next to Beinn Eighe, it better be!
During that first visit we didn't have enough time to explore the Graham properly, so it would be a chance to visit at least one of the outlying tops, possibly for some extra views. As it turned out, the outlying top was toe ONLY spot where we saw any views, so just as well we took the detour

Our route followed the great stalkers path into Glen Grudie, up Coire Briste and to the summit, then returned over Creag na Feol. Going is good on the path, a bit rocky on the approach to the summit, but surprisingly dry.

Track_BEIN A CHEARCAILL 25-11-18.gpx Open full screen  NB: Walkhighlands is not responsible for the accuracy of gpx files in users posts
We started with the first rays of daylight, from a layby just north of Bridge of Grudie. It was clear sky at the moment, but forecast suggested cloud later during the day.
Good morning, Torridon:

The cloud was drifting around, touching the top of Slioch:

Trudging along the path, we noticed a brand new track below us. It follows River Grudie and, as we suspected, it gives access to a small hydro scheme (oh no, not another one, I thought, they pop up everywhere!). The hydro dam can be seen to the left in the distance, an ugly scar on otherwise wild landscape:

Zoom to the area of the dam - still a bit of a mess:

Bellyache temporarily under control, I posed with the mighty Slioch. Seen from its best side here: 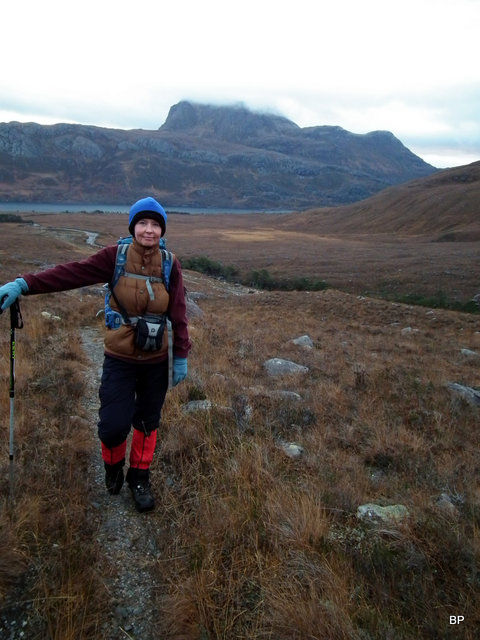 Shortly before crossing Allt a'Choire Bhriste, the path divides (look for a cairn marking the spot). We took the right branch here and started ascending up Coire Briste. Weather was deteriorating, cloud descending on Slioch behind us...

...and on beinn Eighe in front of us. Shame, i thought, the most intriguing views from Beinn a'Chearcaill are towards Beinn Eighe and into Coire Mhic Fhearchair. But Scottish weather is always hit and miss. On the bright side, it wasn't raining

With cloud pushing in from the south-west, views to Slioch were the best part of our walk. Here, seen from the top of Coire Briste, with a cloudy "cap":

The path ends by a small, tear-shaped lochan and from here it's pathless climbing, but the ground is not difficult:

From the tear-shaped lochan we followed a small stream uphill, over heather and occasional boulders, to another lochan at 550m.
Lochan no. 2: Looking back down the N shoulder of Beinn a'Chearcaill, to A'Choineach Beag, with Beinn Airigh Charr (left) and Beinn Lair (right, in cloud):

My attention was drawn to the islands of Loch Maree:

From the second lochan, a short steep climb leads to a flatter area just below the summit, where views to Beinn Dearg and the Horns of Alligin were revealed...

...but not for a long time, sadly. As soon as we started the final ascent to the top, the clag won the battle and by the time we arrived on the summit area, it looked like this:

The wind was seriously cold, even Kevin covered his face: 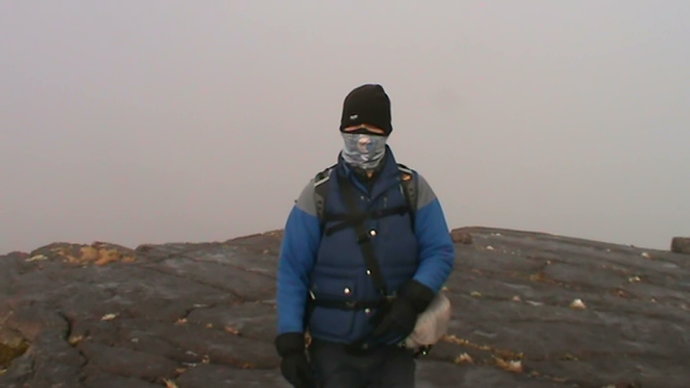 We waited on the summit for some time, but the clag was stubbornly clinging on. Our hands were freezing off, despite thick gloves, so eventually we gave up and started descending. I suggested a detour to Creag na Feol, hoping for some views at least from the lower top. The suddenly - bang! - we walked out of the cloud and into the bright, sunny world:

The sun was directly behind Coire Mhic Fhearchair so photos in that direction are a bit overexposed: 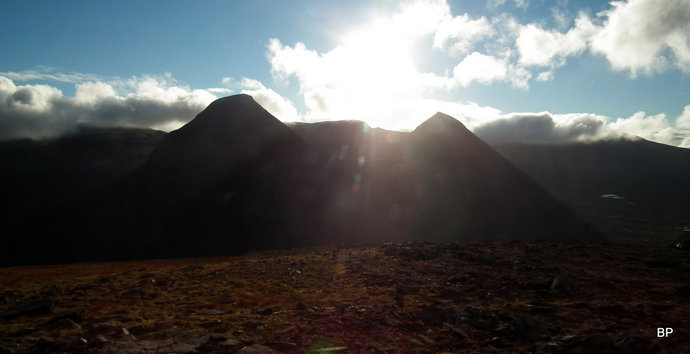 On the top of Creag na Feaol (a Sim, if anyone is interested), with the western tops of Beinn Eighe behind me:

We took a longer break on Creag na Feol, stretching our legs and drinking a cup of hot tea. We considered returning to the summit for some extra photos, but in the end, my aching belly reminded me that I was not in my best shape. We headed back for the northern shoulder, aiming for the tear-shaped lochan, to pick the path descending into Coire Briste:

As we descended back into Glen Grudie, we enjoyed more views towards Slioch:

Cloud lifting from the hills across Loch Maree:

One more shade of Slioch, this time from lower down in Glen Grudie:

Summing up, a lovely, enjoyable shorter day, even without the summit views. Shame only about the new hydro scheme: it makes the bottom of the glen look messy, but once on the way up the corrie, it disappears from views and the rest of the walk celebrates the true rough beauty of Torridon