Christmas meet time again - not sure why the Saturday always seems to start with a sore head and a strong aftertaste of whisky, but a good fry-up helped

. After some vaguely remembered chat the previous evening, David (Rounsfell) and I had decided on something that didn't require any driving - a circuit of Beinn na Gucaig, Doire Ban and Tom Mheadhoin fit the bill nicely. On our way at 10:30 am, we took a route that passed Inchree waterfalls - a long time since I've been here.

Map.gpx Open full screen  NB: Walkhighlands is not responsible for the accuracy of gpx files in users posts 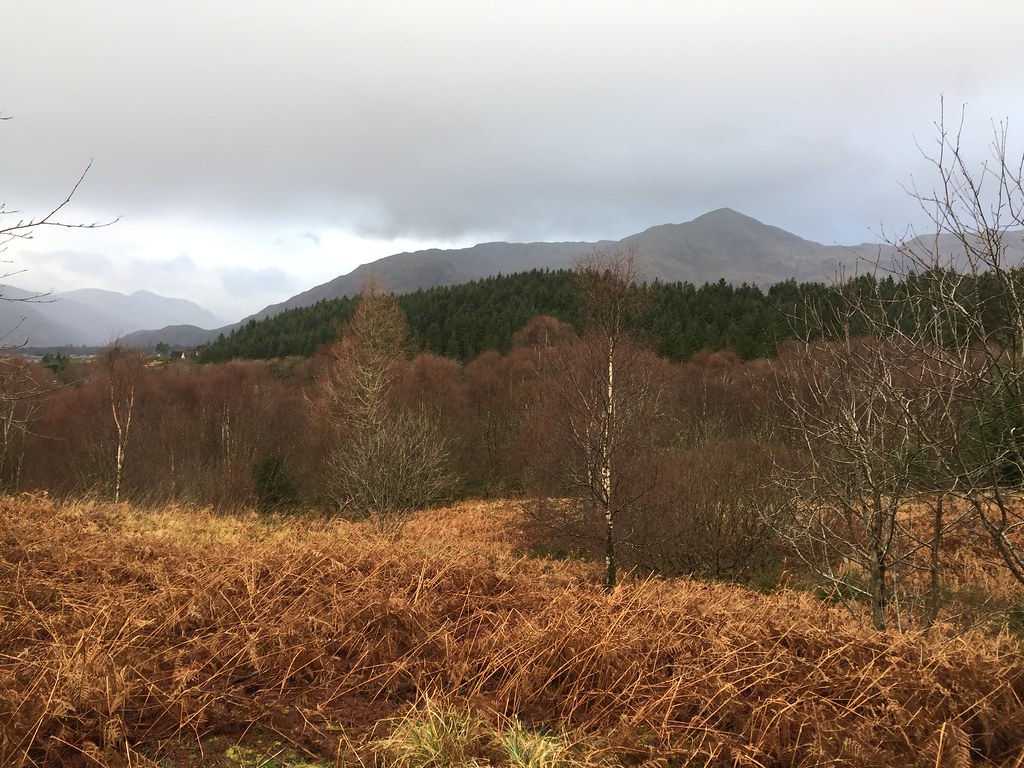 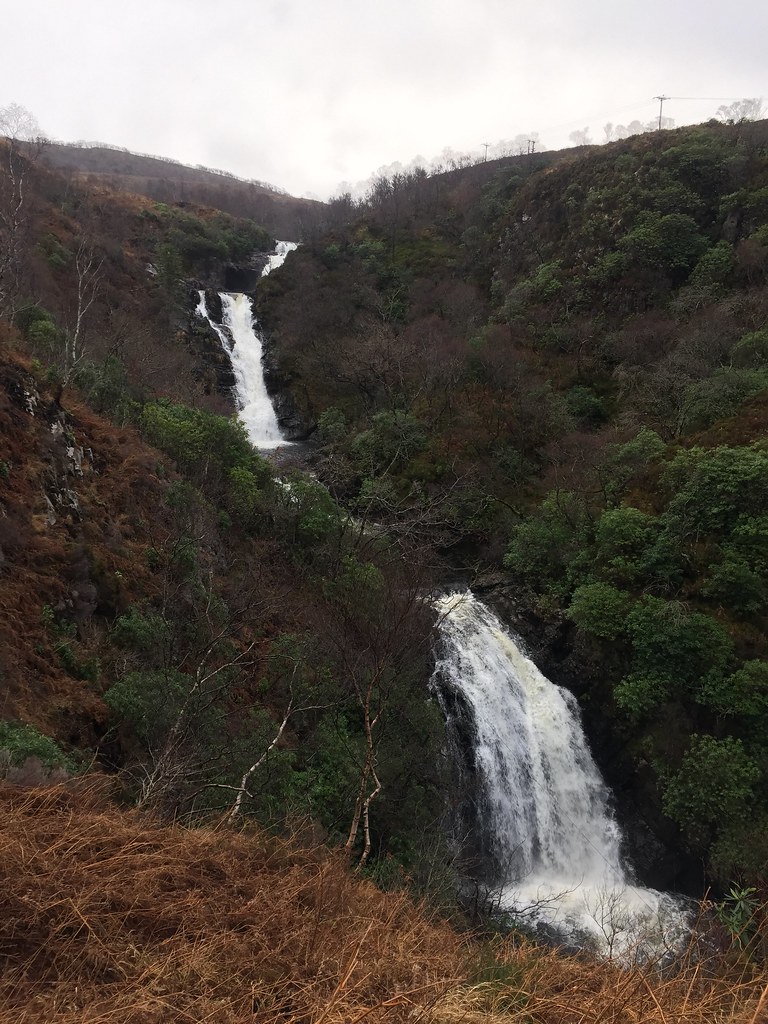 I had a vague memory of a path going up the SW ridge of Beinn na Gucaig, and sure enough, we found a faint way. Managed to lose it again on and off shortly afterwards, before meeting a vague quad bike track which led up to the transmitter thingy that Glencoe MRT own. Despite the so-so weather, the views back down Loch Linnhe and over to Ardgour didn't disappoint. There was even some sunshine on Stob Coire a’ Chearcaill. 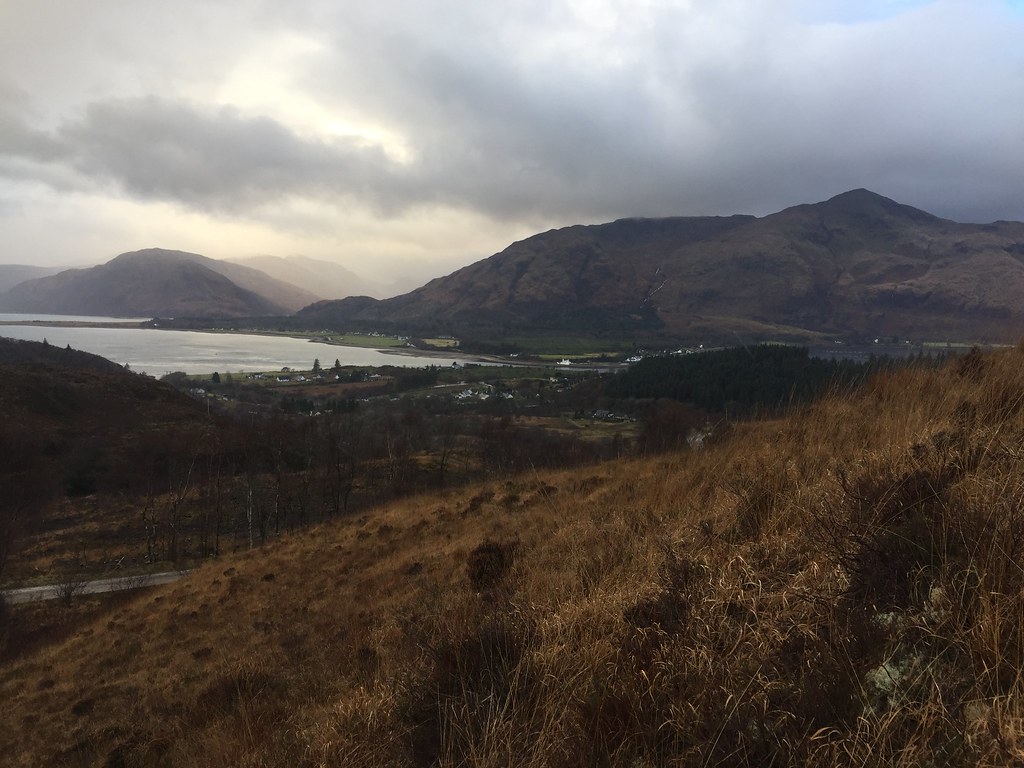 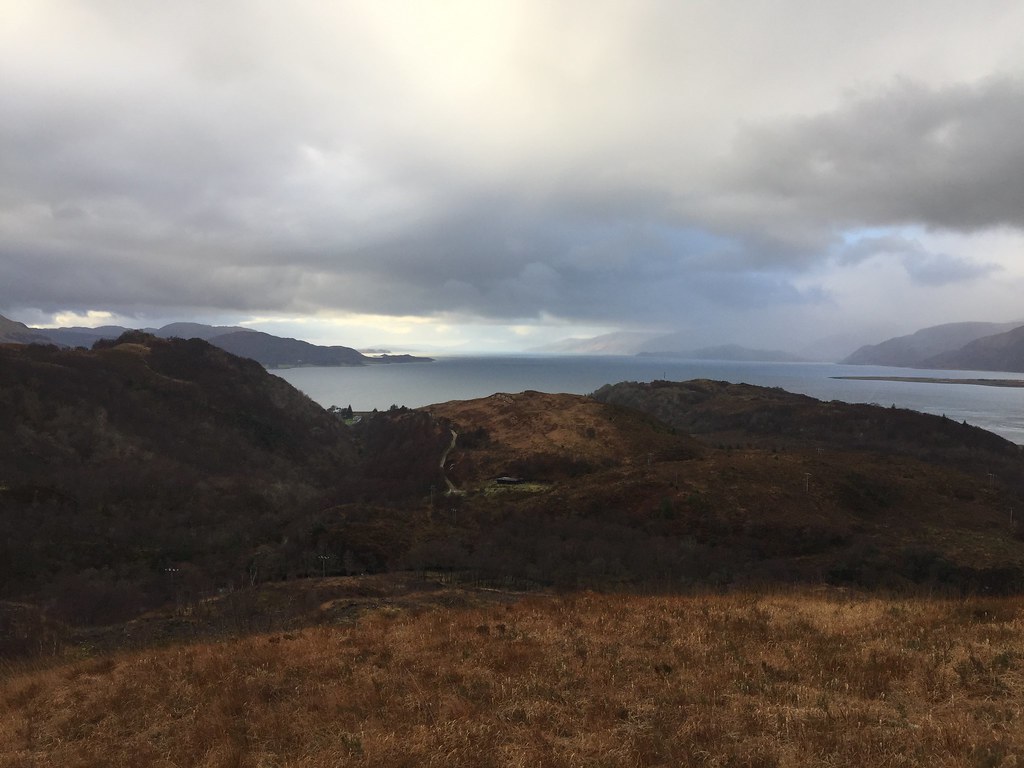 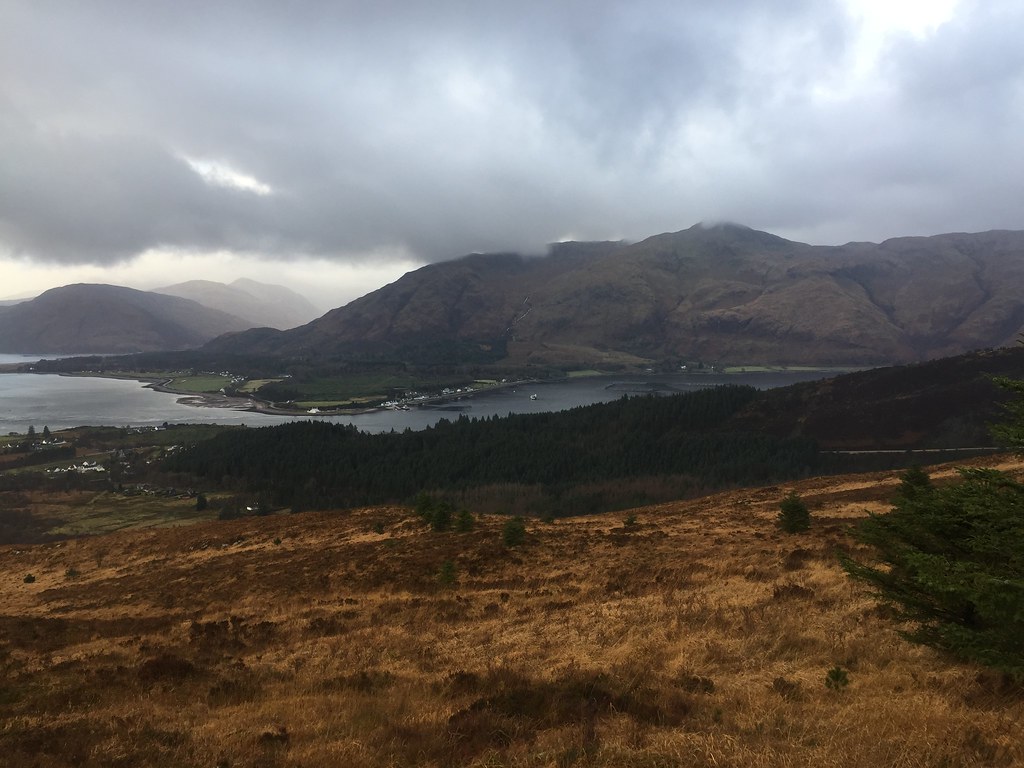 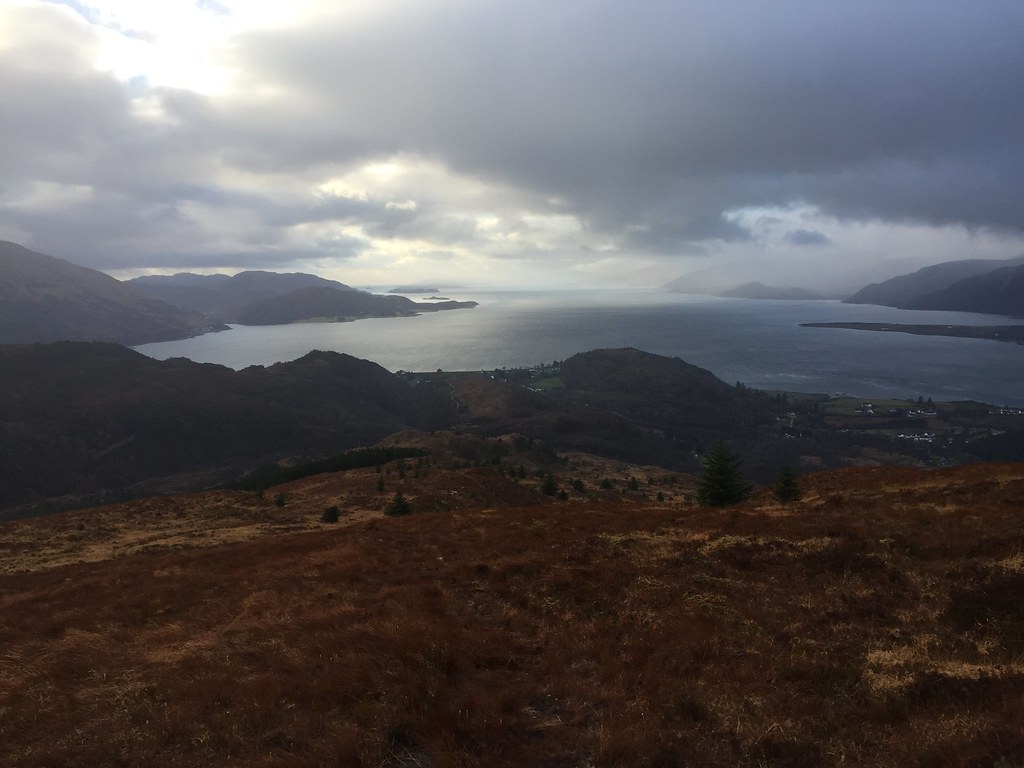 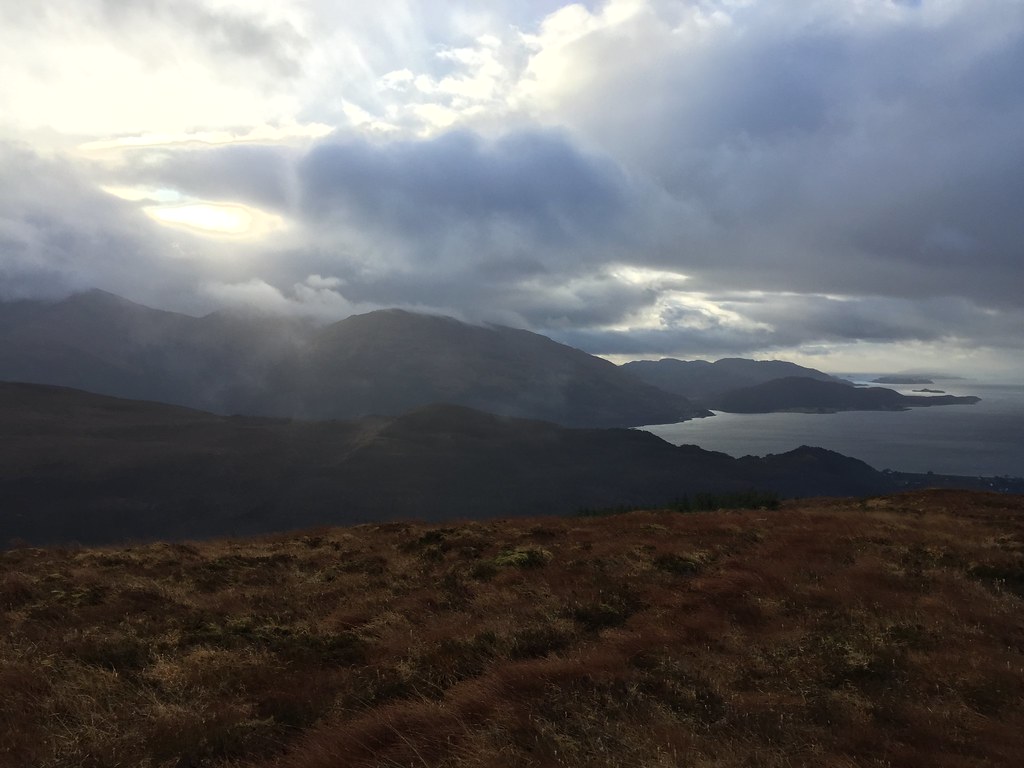 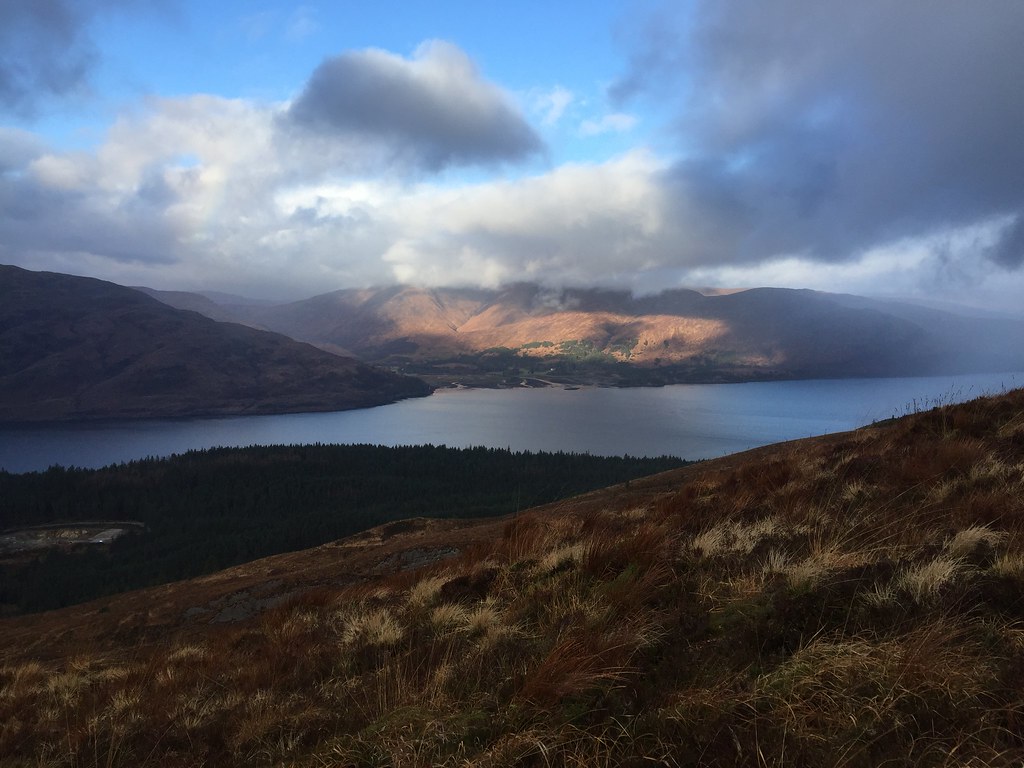 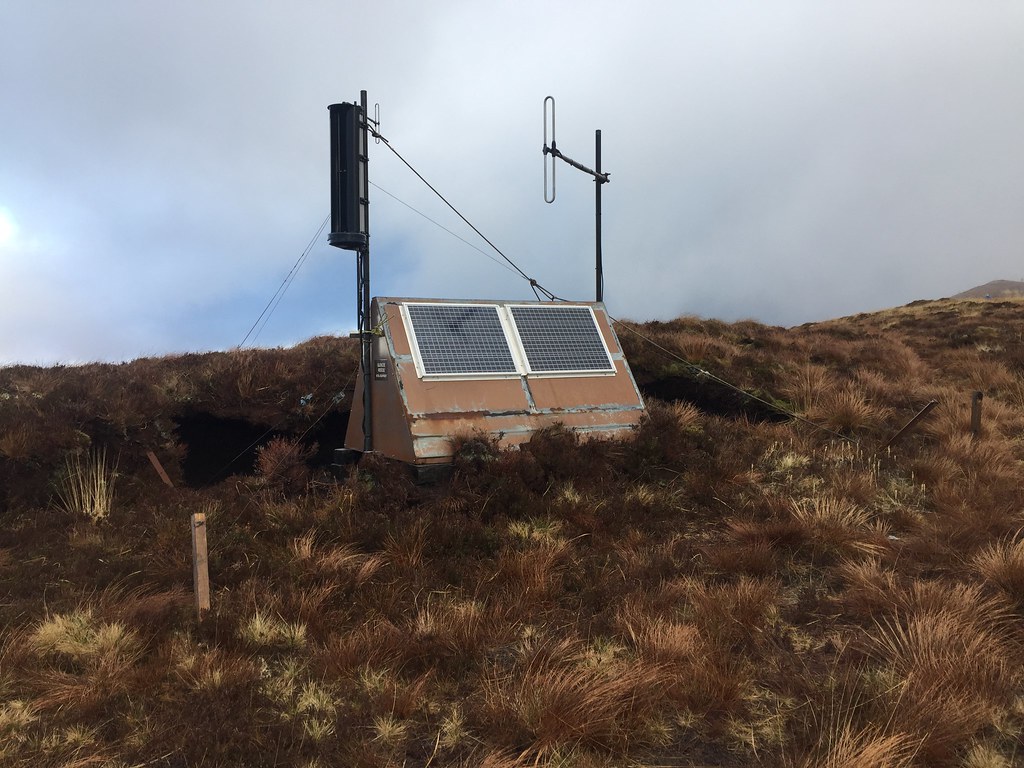 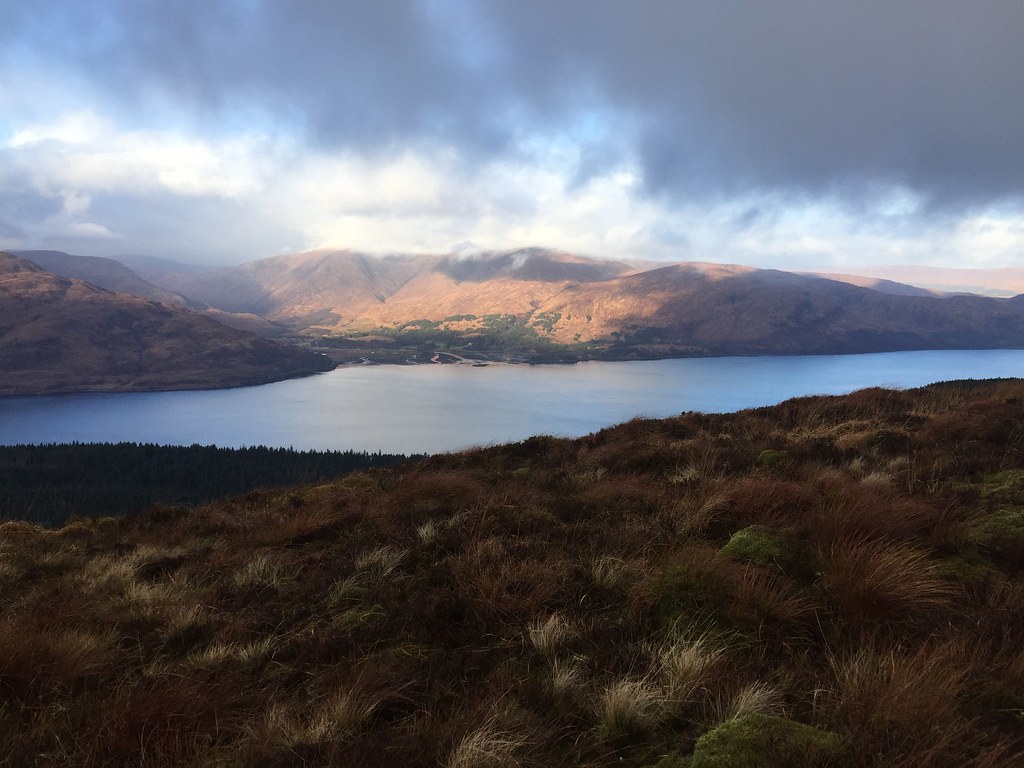 Shortly afterwards we caught up with Sabine and Matt, before heading into the cloud after a bit of a chat. Not much doing at the top, so we didn't hang around, dropping down to the col. I say col, but the head of Gleann Righ is about 150m above sea level. Who's daft plan was this? Oh yes, I think it might have been mine

. Pretty steep descent lower down as well - Rounsfell was heard to say 'I wish I'd brought some new boots' more than once! I was feeling smug, having done exactly that last weekend, and therefore didn't fall on my arse at all. 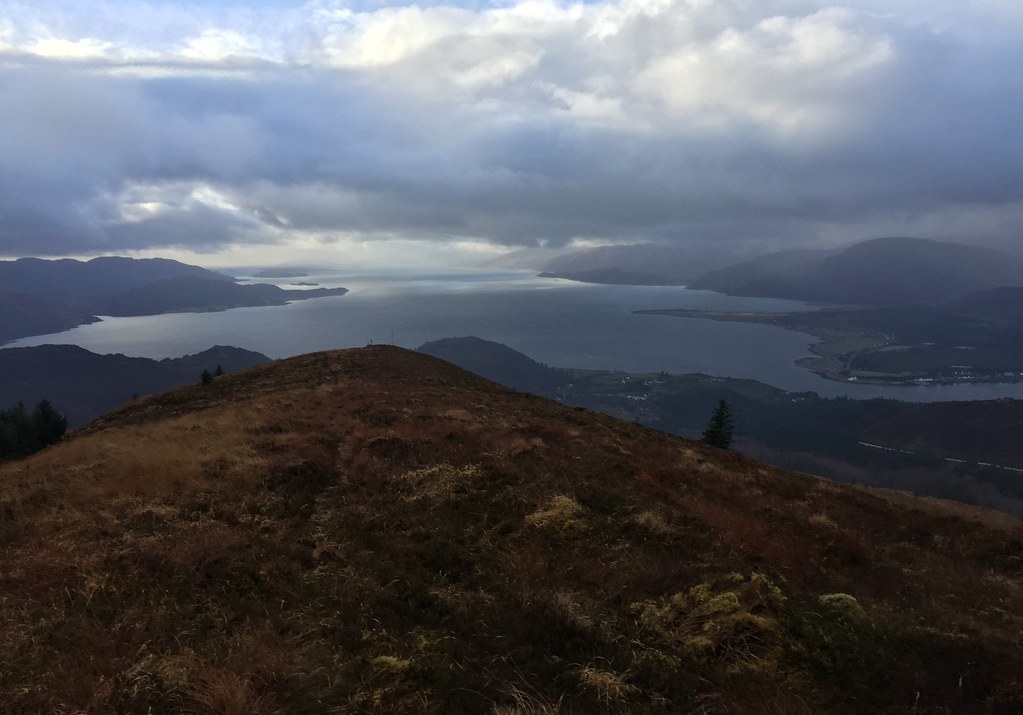 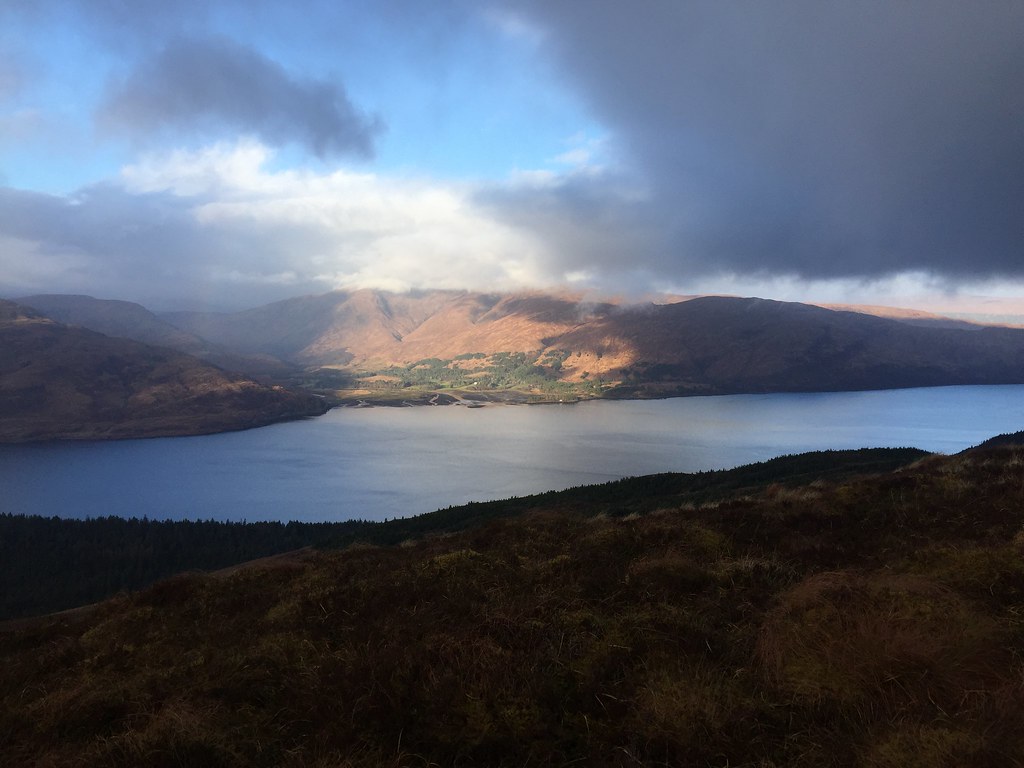 Across Loch Linnhe to Inverscaddle bay 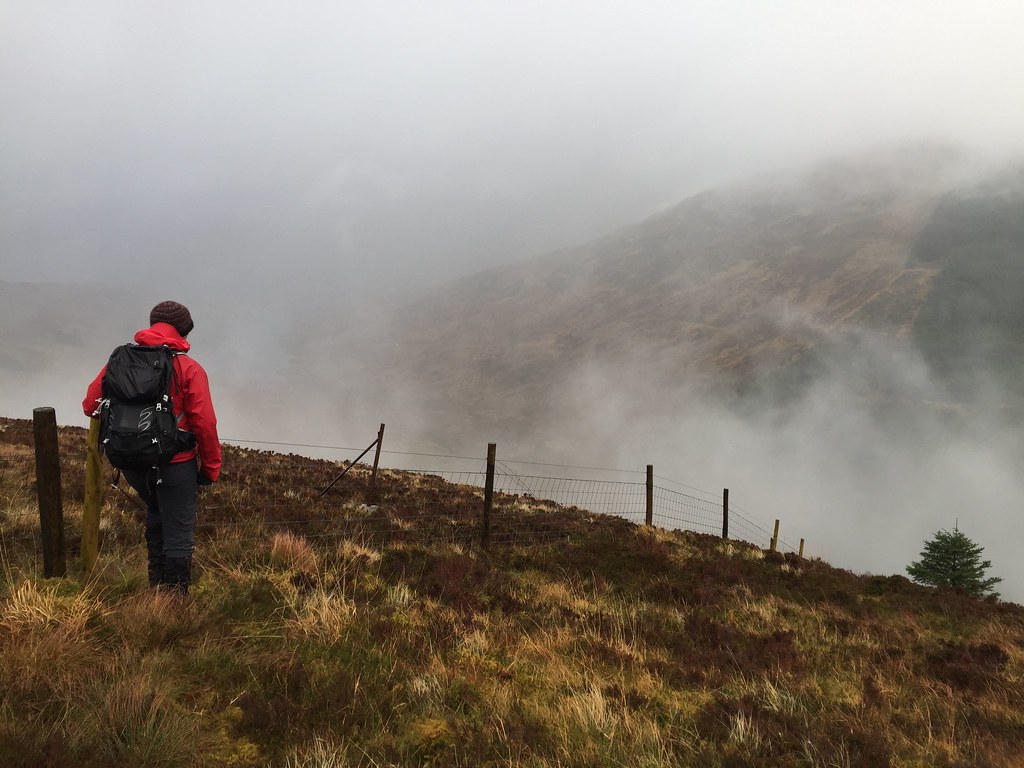 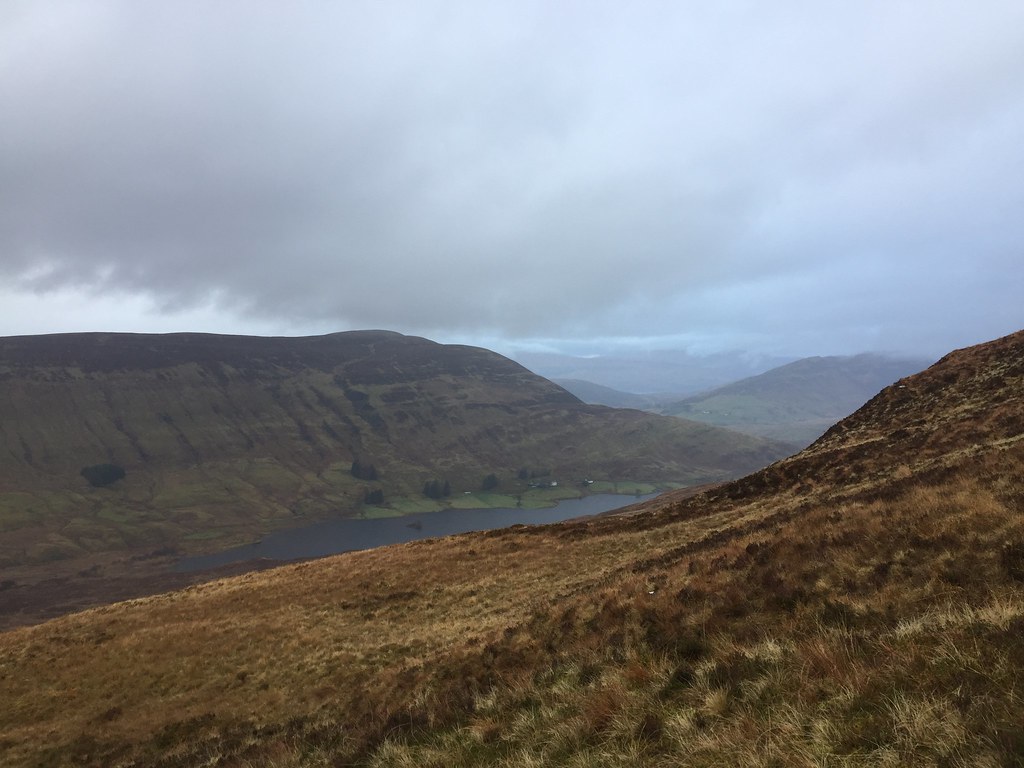 This was the place for second thoughts, as we could easily hit the track down the glen and be back at the bunkhouse for mid-afternoon. But somehow, despite the opportunity to sleep seeming very appealing, we decided to plough on with the circuit (a decision briefly regretted 100m further up...). Fortunately after a short section of bog, the slopes of Doire Ban were easy going underfoot - which made it more obvious how steep it was 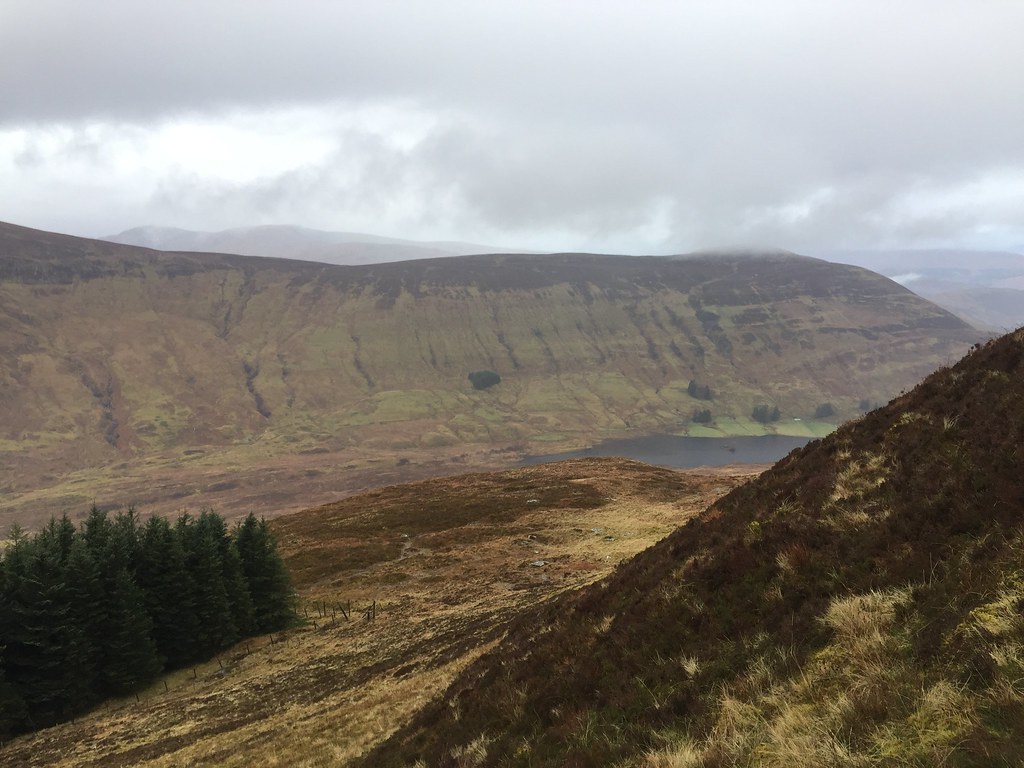 There were views of sorts from Doire Ban - the only summit we saw anything from today. A bit limited, but nice views through the lifting clag to Lairig Mor and Ardgour. 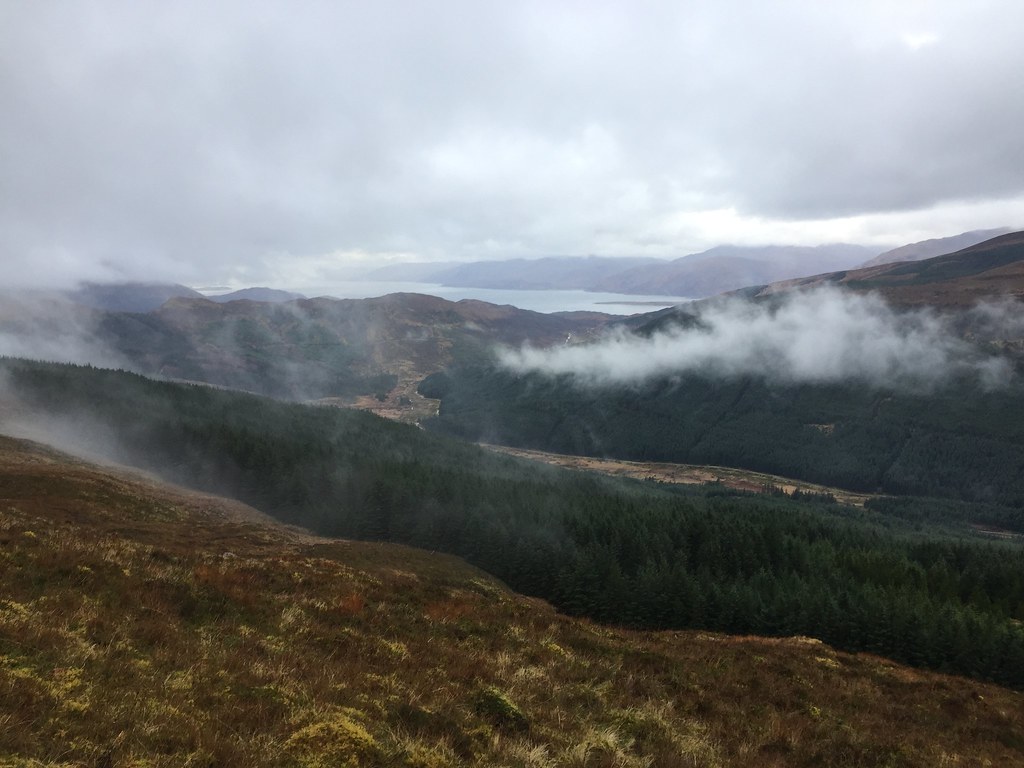 The next drop was less vicious, and an hour later we were approaching the summit of Tom Meadhoin. No idea exactly when I was last up here, but I think around 1993, and there were views - good ones. Not so today unfortunately, so we rapidly moved on to the western summit and then down, with a quick map check to avoid us ending up in North Ballachulish. 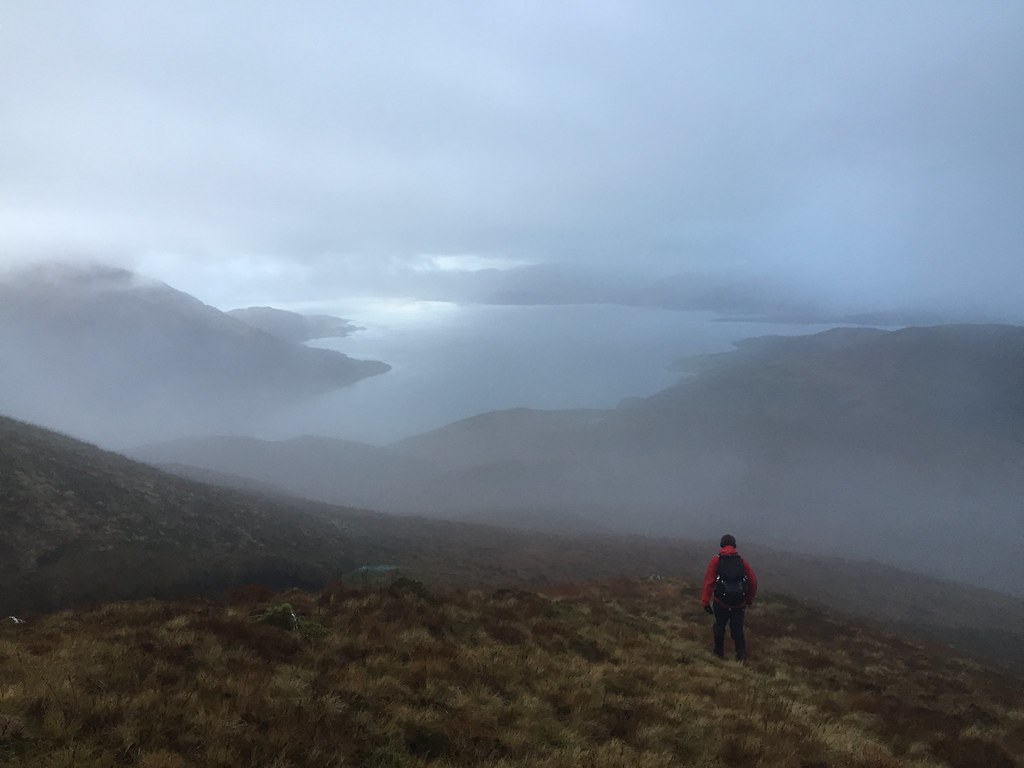 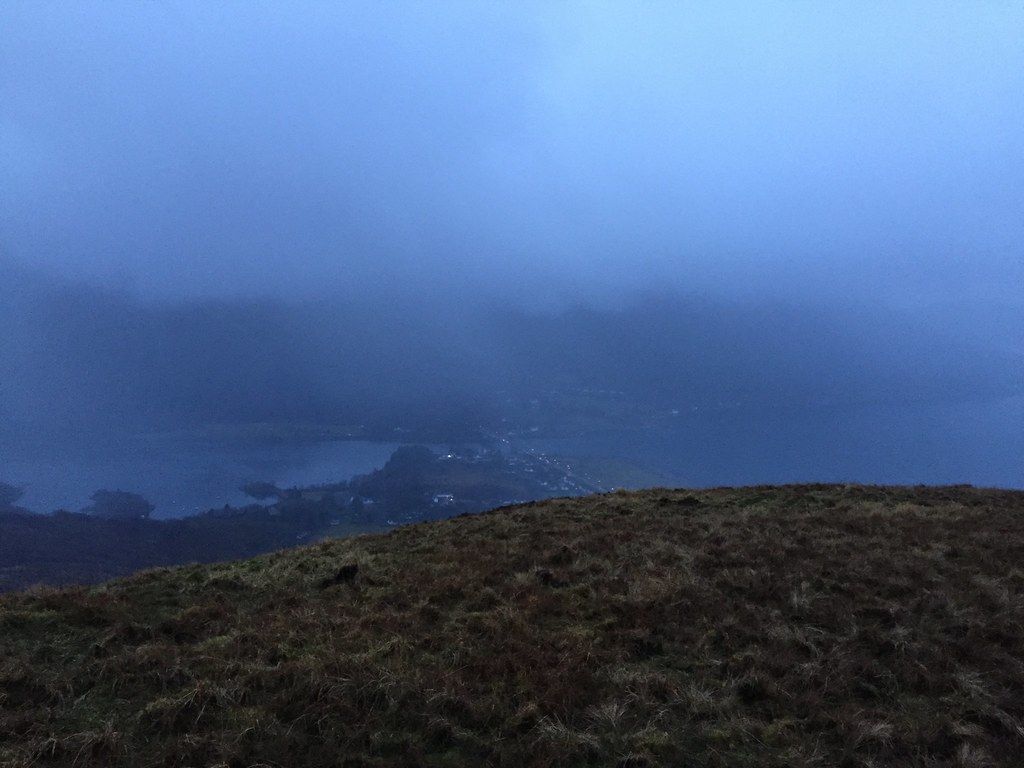 The light was going now, and we spotted a stile leading over to a fire break on the northern slopes. This led to a track which could potentially take us out of the glen rapidly, but the map said otherwise. Risk it or not? We decided not to, and instead plodded on up Tom Iain, and then onwards over heathery ground towards the trig point on Beinn an Aonaich Mhoir. Strangely, a guy appeared out of the woods at the stile and wandered up to Tom Iain ahead of us, before sitting on the summit to make a phonecall. 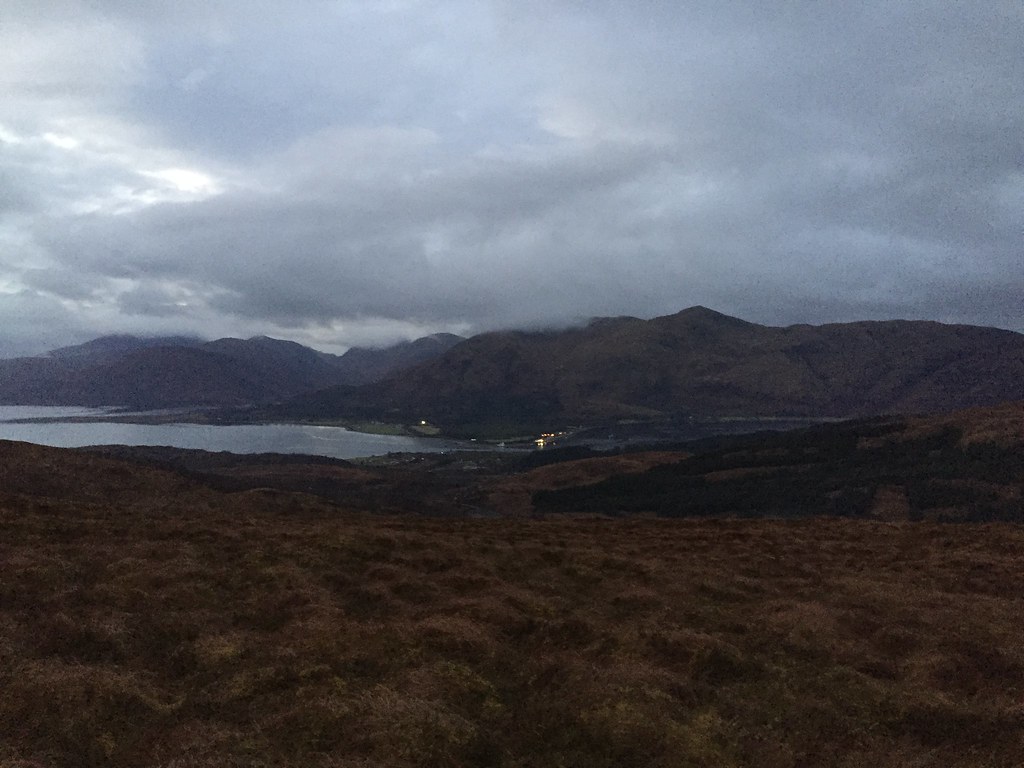 At least we were out of the cloud now, and it wasn't an unpleasant evening either. The map called for a visit to Sidhean an Aonaich Mhoir next, but this really didn't appeal in the fading light as the ground was getting rougher and the vegetation higher. Instead we decided to plough straight down to the river just west of Gleann Seileach and cross it to get to the main track back to Inchree. While easy enough higher up, this deteriorated into quite interesting terrain lower down that had us both reminiscing about our favourite Galloway tussock experiences (in between some mild cursing anyway). To add to the fun, there was some lovely (to look at) woodland lower down on the slopes, before we finally reached the river. Headtorches on at this point, we plunged straight through it and I managed to fill my nice new boots up with water

. Still, we were done with the awkward stuff, and it hadn't taken us too long to drop off the hill. All that remained was a couple of miles back down the glen. A decent day out despite the weather, which left us feeling deserving of the 45 courses of buffet that were on offer later on

Another of your friends who needs new boots....wondering what the common denominator is here

Users browsing this forum: Claire2285, MichaelaMartin, The Rec and 67 guests