corserine.gpx Open full screen  NB: Walkhighlands is not responsible for the accuracy of gpx files in users posts
A glorious day for this ridge walk spending hours in powdery snow.
I try to do this every winter , and my rule of thumb is - if Arran is half covered in snow [from my bedroom window] then the ridge will be also.
Walkhighlands route suggests an anticlockwise circuit but in winter i like a clockwise circuit as the descent from Polmaddy Gairy is into a corrie that is sunny,sheltered and always full of soft snow that is a joy to descend-and looks very hard work to ascend.
I set off having attached my new Grivel Spider mini spike crampons which are brilliant for walking on compacted slippy snow on forest tracks-about 90 minutes of this on this walk.
Below is first sighting of the ridge after a long spell in the forest. Easy navigation following the two sets of prints.
Meikle lump to the left and the whiter main ridge to the right. 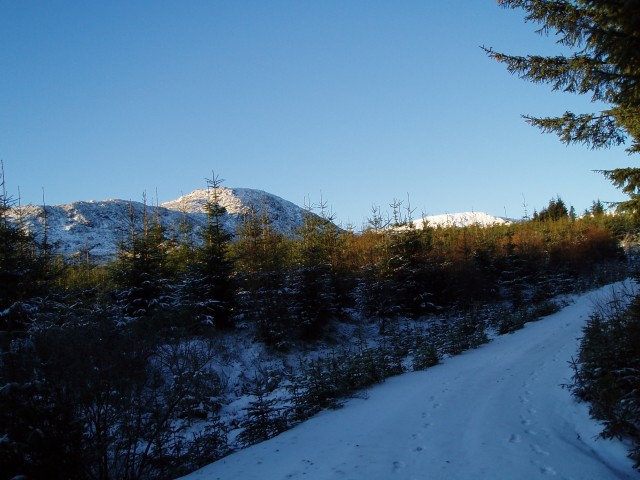 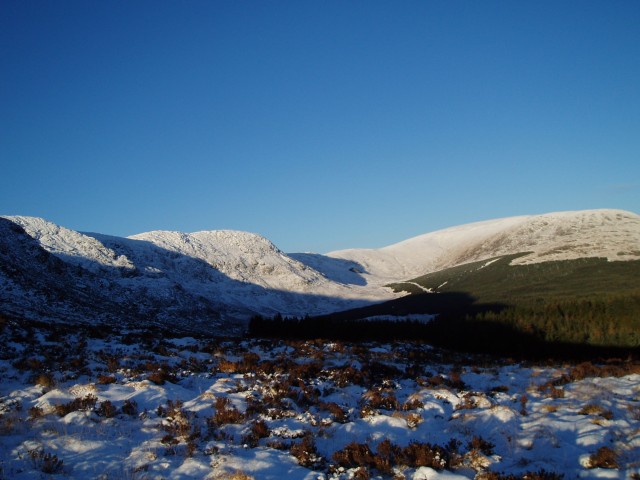 View of the wide ,flat Corserine plateau looking distant from the top of Meikle Millyea 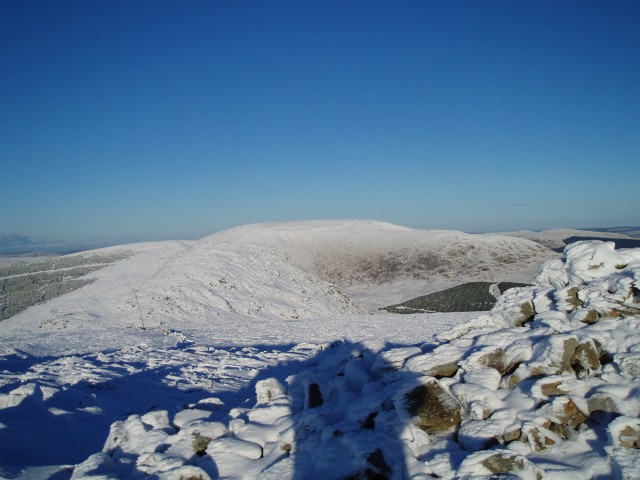 Having done most of the hard work , now headed NNW along the broad undulating ridge. Virgin snow now as the previous foot prints have disappeared.
View of the Merrick. 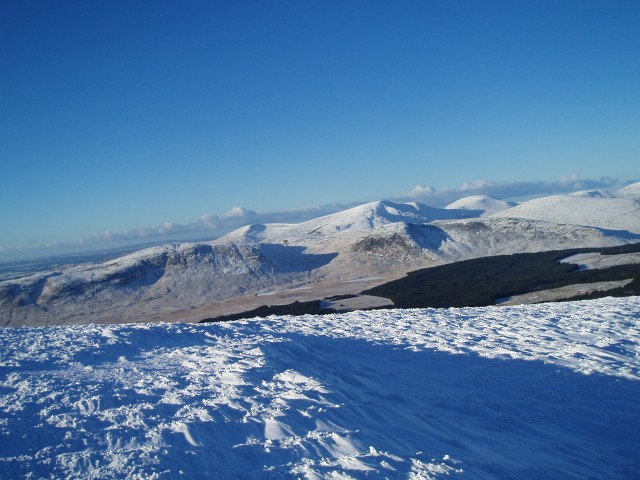 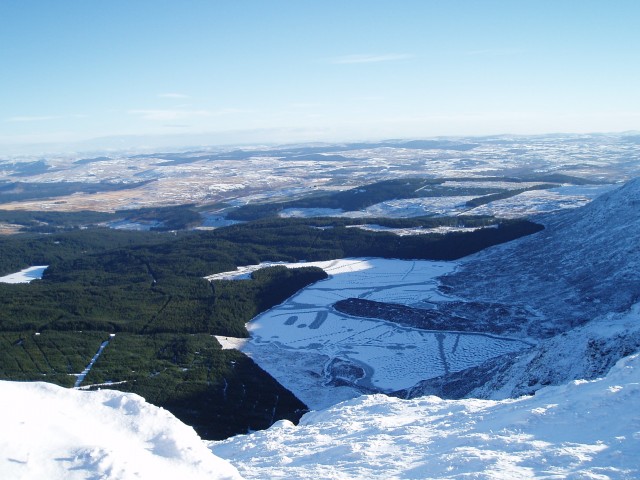 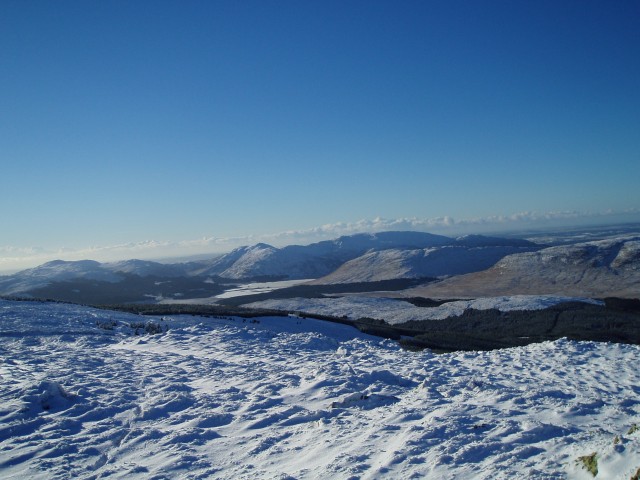 Climbing Corserine ,near the top , came across the only non-powdery snow on the hill.
Finally after leaving Corserine ,saw my first and only walker of the day.
Took a curved route to Polmaddy Gairy where you have to go along quite far,to avoid very steep slope, before turning right into the corrie where you keep quite high up aiming for the lowest rocky outcrop to contour round before dropping to edge of the forest.
View looking up from the stile at forest edge. Contoured round the sunny part of the slope keeping above some crags. 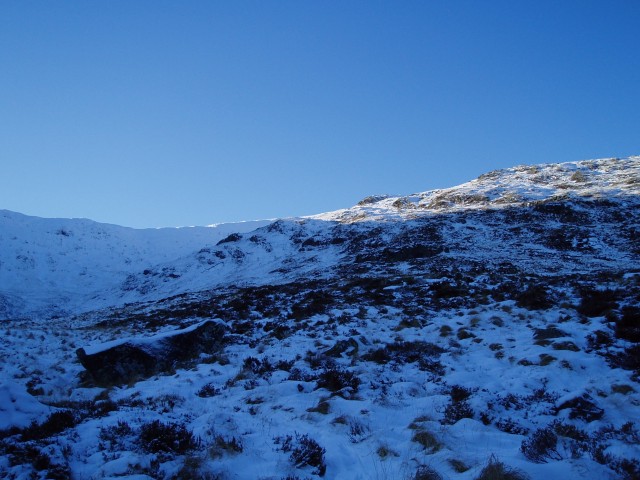 Although the section from the forest track to this style is now well signposted from an anticlockwise perspective , still a bit tricky in my direction but followed my fellow walker's prints then swapped my crampons for the Grivel Spiders and a long walk back to the car.

Report by Honey-munster this year showed the photo below and asked if he should have followed the yellow then the blue lines. Yes you can do that although you have to cross 2 burns. The official route veers slightly left just before the yellow route crosses a burn,then runs beside the burn before bridging it to join the blue route.
The end of the blue line is site of the style.
The photo must be quite old as the trees are much bigger now. 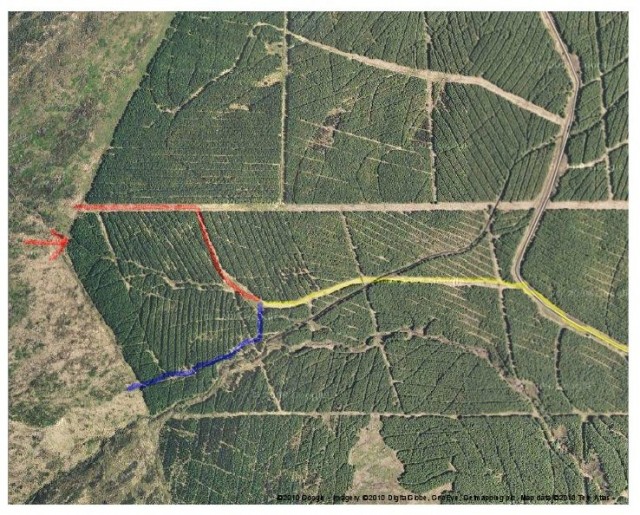 My visit here in 2007 was in blustery rain with limited views.

Nice one and some fantastic pictures!

Thanks for the update on the track to Polmaddy Gairy. The aerial photo was from Google Maps. The yellow is a new forest track and I think my confusion over the route earlier this year was compounded as the signpost as the track reaches the burn was lying flat on the ground at the time. Leaving the track there and staying initially on the S side of the burn makes sense.

Quite a while since I've been on those hills so nice to see them again. I think that route was pretty similar to the one we took apart from the descent off Corserine - can't remember where we went there but we ended up following the forest edge until we could find a firebreak and then squelching along that being eaten by midges and flies all the way! (was a summer trip)