First time on Beinn Narnain & Beinn Ime.
We couldn't have picked a better day as the views in all directions were excellent, very little wind and a blanket of snow everywhere. Setting off in the dark we witnessed a beautiful sunrise unfolding behind us as we headed for the slopes of Beinn Narnain. 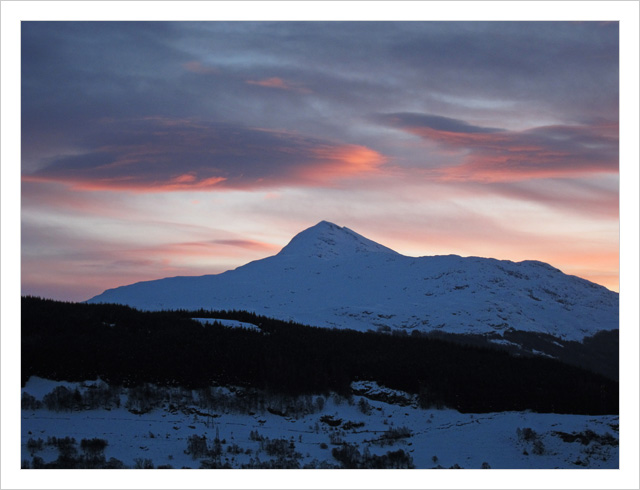 Having been on the Cobbler several times before via the usual zig-zag path we were going straight up this time.
Unfortunately as we reached the buttress and headed to the right there was no trace of the path due too deep snow and no tracks. It was heavy going , in knee high snow much of the time, as we headed up.
The Cobbler. 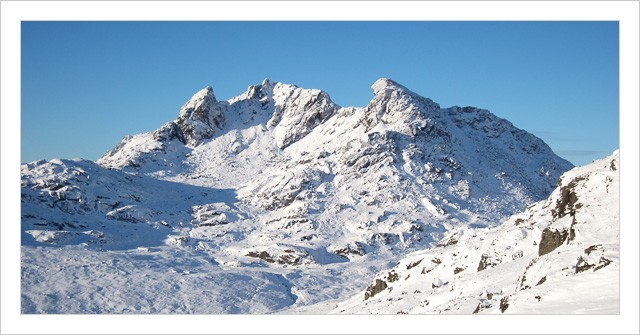 My mate Joe in snow up to his knees! 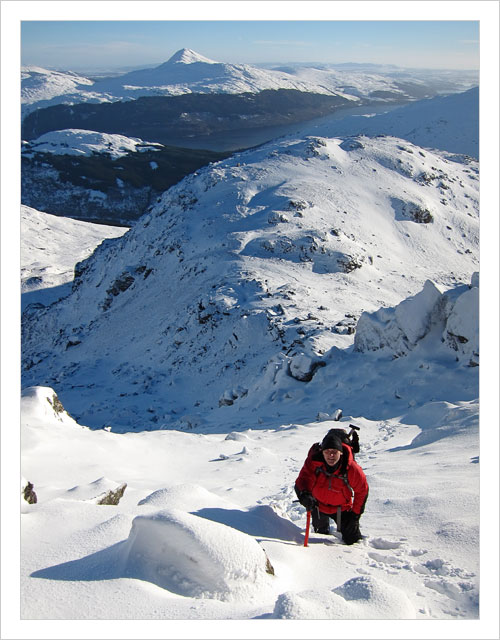 It was a hard grind as we reached the last scramble to the summit and I must admit there were a few difficult steps on the way. 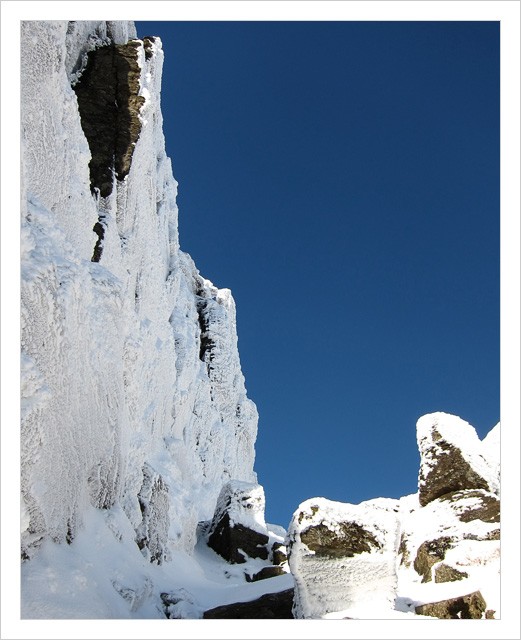 Joe waiting patiently, as always, as I struggle with un-gloved frozen hands to get the shot. As the summit is reached the 4 hour struggle is forgotten as we take in the spectacular views all round. 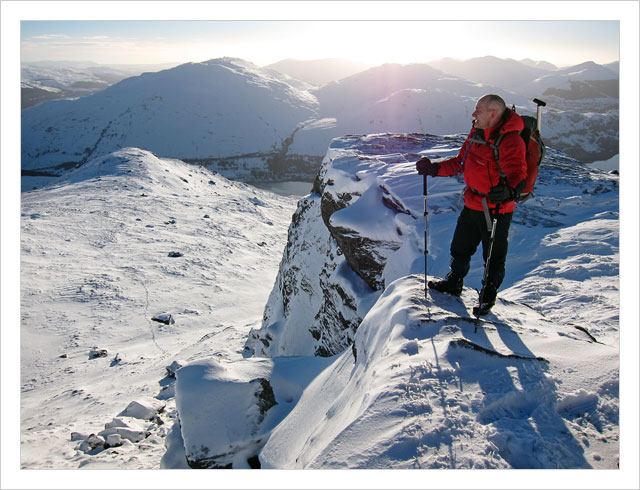 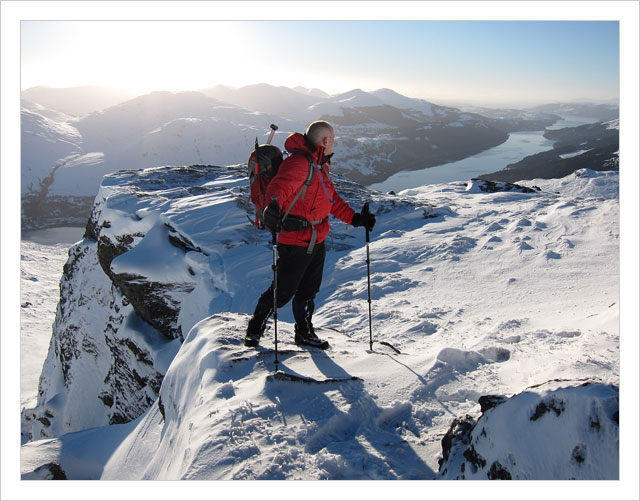 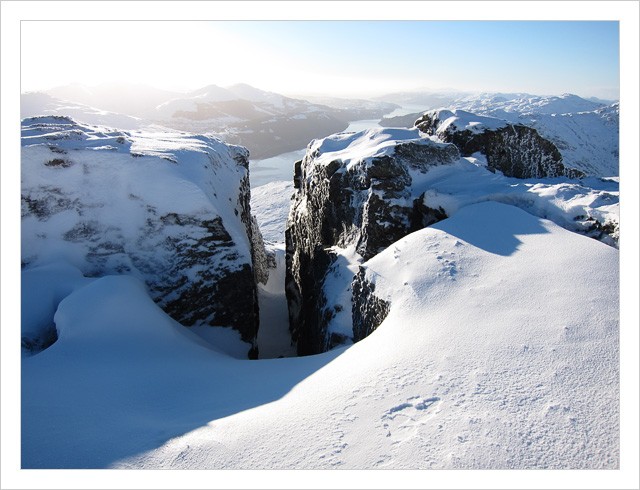 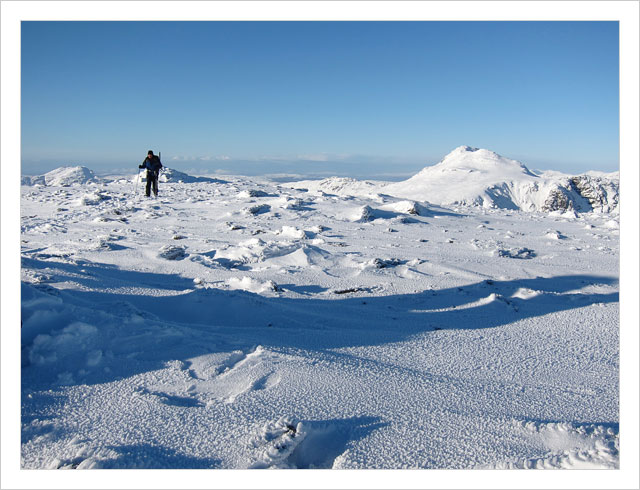 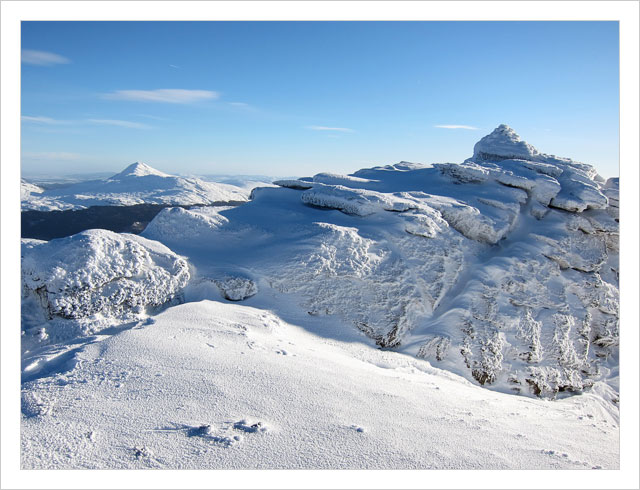 A well earned fuel stop!
The summit is starting to get busy with most arriving from the Cobbler path although there were quite a few coming up the hard way too. 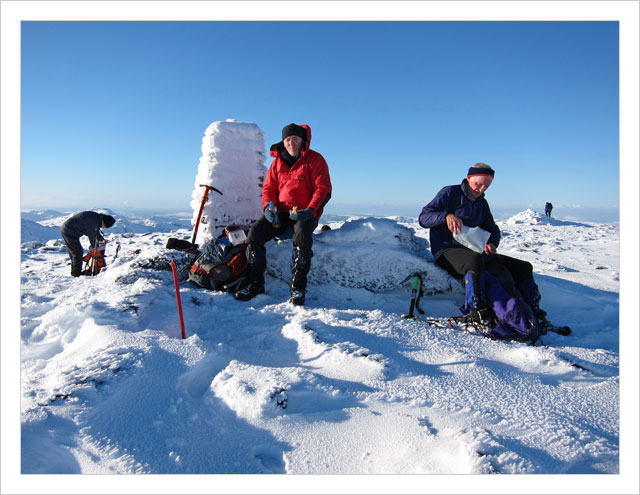 Now the descent and this was amazing as we ran most of the way down through deep soft snow.
Crossing the style at the bottom of Beinn Ime we swapped Ice axes for walking poles and headed up the relatively easy slopes. The path was now well trodden and people could be seen all over the mountains now in all directions.
Lunch now on the summit with a young lad from Greenock, who unfortunately had his water bottle soak the inside of his pack, including gloves. We offered him some spare ones but he was well prepared and had another dry pair. Stunning views back over Beinn Narnain to Ben lomond as the sun was starting to drop and time to head for home. Last shot of the day, the usual view down Loch Long. Back to the car 8 hours later, reflecting on one of our best days on the hills to date!

Beautiful pics davgil, 10 hours though, holy cow . . . bit of an epic. I'm sure you and your legs will remember this one for a while

I was also up a walk up Narnain yesterday via the Spearhead. Lots of windslab about which was slightly worrying and the final slope before the Spearhead was a bit tricky with thawing snow sliding off the wet grass underneath and quite a wee drop behind down to the boulder field. Cracking weather though. Had my sunglasses on all day

Just seen your pictures now. Cracking. Mirror of my own ones.

You got a sun rise and a sunset, bet it was fantastic!! One of the kind of days that really appeals to me

Nice report and some lovely pictures there davgil

It's a lot easier in summer but then again you don't get the stunning pictures which you got in winter. Ten hours is a long day at this time of year !

Thanks for the nice comments everyone!
Just did a quick edit...was 8 hours not 10...sorry.

My mate's gps had added a previous cycle run of his to our time, didn't realise at first.
Stretch: Sorry, only 8 hours but still felt like an epic.
Milesy: Yes the windslab was everywhere and worth a watching, a few tricky parts. Hope to see your pics from the day!

Lovely pics mate. I went the spearhead route up Narnain a few months back in the rain and it was fairly challenging, cant imagine what it must have been like in the snow and ice!

Out of curiosity, how was the route up Beinn Ime? Can this be done without Ice axe etc? I was thinking about going straight up the path past the cobbler and by passing Beinn Narnain.

The route up Beinn Ime was really easy, we swapped axes for poles at the bottom and it was just an easy walk all the way up. It will vary depending on snow conditions but I can't imagine it being much of a problem, maybe get advice from some of the more experienced walkers on the forum.

I think ill let our current levels of snow melt a bit before tackling it. I havent done a winter munro yet but im itching to get in about it. Looking for a fairly straightforward one to get me going

That looks superb Davgil. Those framed photos are excellent. Awesome.