Looking at the weather forecast, there looks to be just one single good day over the whole Christmas period, on Christmas Eve. Every other day is going to be claggy, windy, drizzly rubbish. So the one good day was the ideal opportunity to climb the Lakeland's finest mountain of all, Scafell, taking in Lingmell, Broad Crag and Ill Crag, which I'd missed before (or possibly not, I can't really remember).

Going from Lingmell to Scafell presented me with a few options. I wasn't keen at all on the Foxes tarn route, which involved a long descent and a dull looking re-ascent. Broad Stand didn't look safe, especially in the icy conditions. Lord's Rake looked like the best option, but while reading about that I discovered the alternative route of the West Wall Traverse. This starts off climbing the Rake, but then makes a left turn and climbs straight up through Deep Gully. Wainwright seemed to rate this route very highly but I was unable to find any previous WH reports describing it. There are a couple of YouTube videos but most of the time involve footage of the climbers feet, so weren't very helpful.

I was fully expecting the gully to be filled with snow and ice so took crampons and two ice axes. Approaching the area by road it was apparent that there was no snow, not even on the tops. Still, there are often patches in the gullies, so I opted to take crampons and one axe, just in case.

Unfortunately, many of my photos, including ones showing the route detail, turned out to be blurred. It wasn't possible to tell from the camera's LCD screen (all photos look blurry)

First, I climbed up Lingmell, going along the shoulder for it's full length: My first view of Scafell was not encouraging. I couldn't see any sign of Lord's Rake and Deep Gully looked almost vertical. For a while I wondered if there had been a major rockfall that had obliterated the Rake entirely. It was apparent that the mountain was entirely free of snow, even in the gullies. So my ice axe and crampons were once again dead weight. 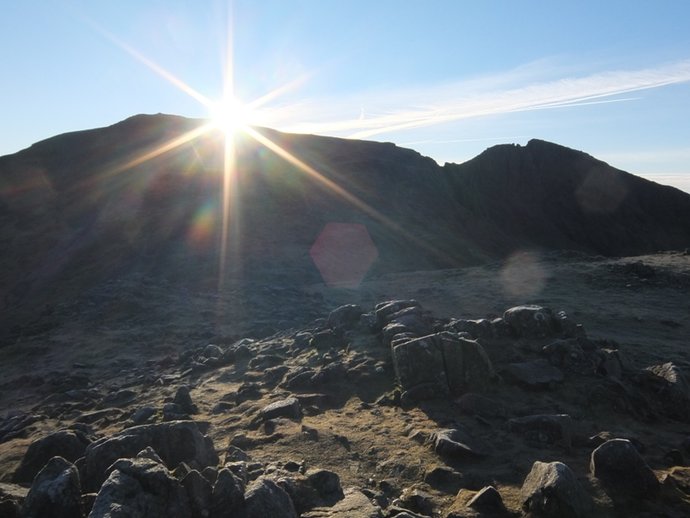 From Lingmell, my next objective was Broad Crag. There is a scrambling route up the buttress to the right of the deep gully on the photo below, with plenty of options to suit the individual, from grade I to II (failing that, there's also the possibility of a plod up to scree slope). Since it was pretty icy I tried to avoid the rocks as much as possible. For much of the climb it was possible to traverse over grass ledges with short climbs in between. 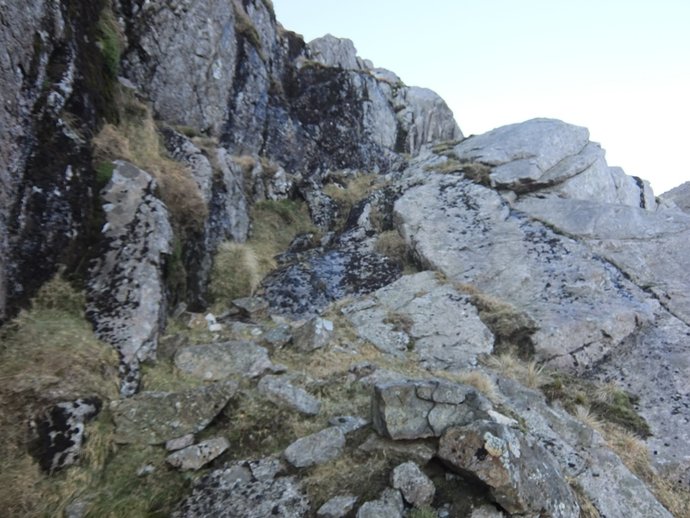 After the main scramble of Broad Crag, the final section is an annoying field of large rocks, mostly covered with frost. 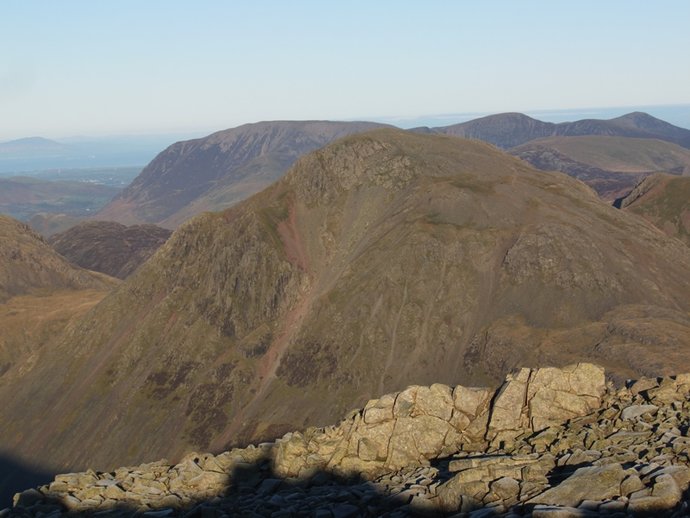 So far, I was really flying - about an hour ahead of schedule, but OS Maps reckoned it would take 6 minutes to walk from Broad Crag to Ill Crag

That must be assuming a paved road linking the two. Instead it was more annoying frost-covered boulders. What's the time? It's time to get Ill! After Ill crag I needed to get to Scafell for the day's main objective. The easiest way to do this was over Scafell Pike. I had no interest at all in this mountain and passed over the summit without stopping. The descent down towards Mickledore was over another field of icy rocks. There was a bit of a path in places but it was difficult to follow.

Down at Mickledore, I chose the wrong route of descent. I should have started closer to Scafell itself, I think. Things started off OK but after a while I could see I was going nowhere. There were some sloping slabs below, covered in ice, with a steep step below. There was no way I was going to risk going down there, but equally I didn't want to fall onto the slabs from up above. I found a nice flake of rock to use as a handhold and climbed over to another rock rib to the right. From here I could see an easy scree run leading down to the bottom. A small path leads round from the foot of Mickledore to the Lord's rake, avoiding the scree cone. The lower end of Deep Gully is a horrible unclimbable section of slimy, mossy rock and chockstones. This is why you need to be careful to find the west wall traverse if descending through the gully. If it gets difficult, you've gone too far. The west wall traverse is not a scramble, just a footpath. Despite being close to the crags below, there's little exposure due to the raised edge on the left hand side. Last section of the WWT

Deep gully itself is a fairly easy scree climb and not exposed at all. The first thing you notice is the echos. Throughout much of the way up I could clearly hear a boisterous group of walkers way down below on the Scafell Pike route. At one point I dislodged a rock that tumbled a long way down the gully, so it's probably not a great route for groups. The crux of the whole route, and the only bit that could be considered a scramble, is right at the very end. A slimy wall blocks the exit to the gully but there's an easier alternative to the left, climbing up a chimney with a few decent hand holds. The summit area of Scafell was completely deserted. Looking down deep gully from above

After climbing to the true summit of Scafell, I descended down the West flank. Definitely not recommended as an ascent route unless your idea of fun is a dull 3000 foot slog, missing all the distinctive features of the mountain.

Not a bad little trip for 4 hours

Looks a great route, I've read a few different things about the West Wall traverse, many saying it's no longer safe due to the amount of rock fall since AW's day, doesn't look to bad looking at your pics however

Good stuff. WWT etc. looks a lot more eroded than I remember. But then it was an awfully long time ago when I was last there. Quite fancy it as a snow climb, if we ever get any snow!

when it was a boulder-filled gully. Then the boulders all got scraped away leaving most unpleasant bedrock at the top. Then the loose "big" boulder made it unsafe for a while. In descent I always used Broad Stand but it's very polished now. In any sensible country they would have put a couple of staples into the crux corner and a big spike at the top, but "Friends of the Lake District" would almost certainly object

Nice to see it all again

Thanks. The Eskdale side is worth exploring - Pen, and L'al Narrowcove. In fact upper Eskdale is much the wildest and therefore nicest part of The Lakes (IMO of course